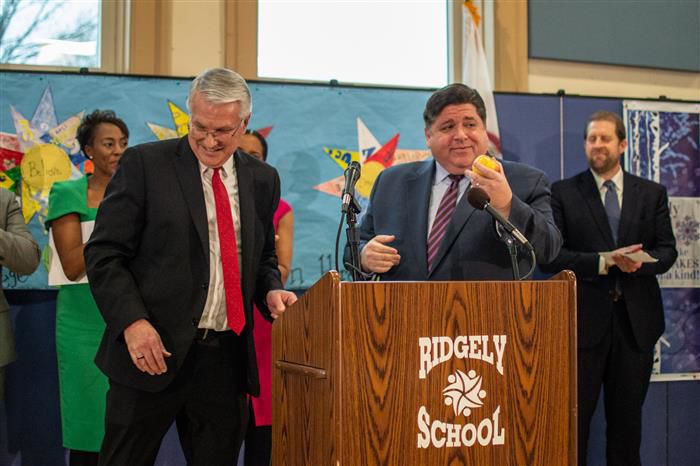 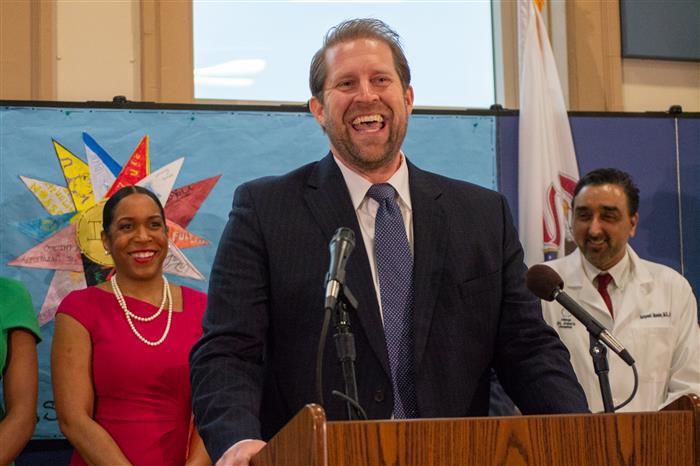 Matt Schmit, head of the office of broadband within the Illinois Department of Commerce and Economic Opportunity, speaks Wednesday at Ridgely Elementary School in Springfield to announce the release of the first phase of funding for a matching grant program to increase broadband internet access in the state. 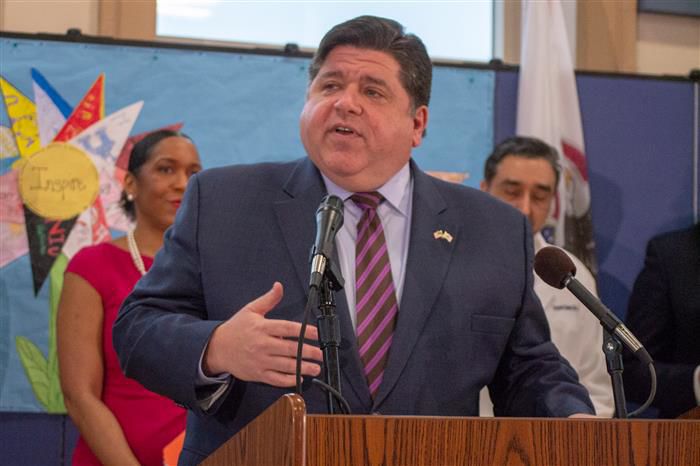 Gov. JB Pritzker speaks at Ridgely Elementary School in Springfield on Wednesday to announce the release of the first phase of funding for a matching grant program to increase broadband internet access in the state.

SPRINGFIELD — The state is accepting applications for the first $50 million in disbursements of a $420 million grant program aimed at increasing internet access across the state.

Gov. J.B. Pritzker announced the release of funding Wednesday at Ridgely Elementary School in Springfield, noting that the rights to “health care and education and economic opportunity” are all “tied to digital connectivity” in the 21st century.

“I want to be clear though,” he said, “This isn't about a person's ability to go online and just look at their Facebook page. This is about a small business owner having the tools that she needs to reach new customers. This is about an elderly couple’s ability to get access to medical experts anywhere in the nation, even if they live in a rural community. This is about giving children like the ones that are here today the ability to research their homework assignments online.”

The program, known as Connect Illinois, is part of the $45 billion capital infrastructure plan that the General Assembly passed last year.

Applications for the first $50 million can be submitted through Friday, April 3. Applicants can receive up to $5 million per project as part of the first round of funding, but they must provide at least 50 percent of the project’s funding.

Matt Schmit, head of the office of broadband within the Illinois Department of Commerce and Economic Opportunity, said he expects applicants to include internet service providers, rural broadband cooperatives and possibly communities looking to invest in broadband.

“We’ll have an inclusive process when it comes to applicants,” he said. “The point is that you've got to have a strong track record of demonstrating that you can do this kind of work. And so we're going to be very diligent in making sure that any applicant that the state partners with is up to this work, and that we're making sound investments for the long haul.”

He said he also expects to see community and provider partnerships in some circumstances.

Schmit said the $420 million accounts for “the nation's largest competitive matching grant program” for broadband expansion. He said $20 million of that funding will go to maintenance of the Illinois Century Network, which is the high-speed state system that serves educational, research, governmental and health care organizations across the state.

“A year ago, our administration made a daring promise to prioritize not just with our words, but with action to bridge the digital divide that hinders so many rural and urban communities,” Lt. Gov. Juliana Stratton said at the news conference.

She chairs the governor’s Rural Affairs Council, and said she has met with rural and agricultural leaders who relayed that a “primary need” was expanding broadband.

“About 10 percent of the population is underserved when it comes to broadband access, and those communities are overwhelmingly people of color or those living in remote parts of our state,” she said.

“Almost a century ago, rural communities were shut out of the modern economy because they didn't have electricity,” he said. “And so government took action to incentivize and accelerate rural electrification. Within two decades, over 90 percent of our nation's farms had electricity. The rural broadband challenge of today is no different.”

Grant information can be found at https://www2.illinois.gov/dceo/AboutDCEO/GATA/Pages/2366-1333.aspx.

In a rare break with Gov. J.B. Pritzker, both chambers of the Democratic-controlled General Assembly voted this week to override his veto of a…

It’s an annual tradition: Members of Congress get to bring a “plus one” to the president’s State of the Union address.

WEBSTER GROVES, Mo. — An Illinois woman has left a $45 million bequest to the Opera Theatre of St. Louis, which will more than double the comp…

Nurse practitioners have nearly tripled in Illinois, where they can now practice independently. Some even use the title doctor. Should you be worried?

CHICAGO — Elizabeth Hug had a choice: wait months to see a doctor to treat her fibromyalgia or visit a nurse practitioner in the same office i…

Matt Schmit, head of the office of broadband within the Illinois Department of Commerce and Economic Opportunity, speaks Wednesday at Ridgely Elementary School in Springfield to announce the release of the first phase of funding for a matching grant program to increase broadband internet access in the state.

Gov. JB Pritzker speaks at Ridgely Elementary School in Springfield on Wednesday to announce the release of the first phase of funding for a matching grant program to increase broadband internet access in the state.