CHICAGO — When organic produce farmer Chad Wallace was a kid, hemp was considered a weed.

Back then, the wild remnants of the World War II-era crop were a nuisance. Smoke would rise from the fence rows and ditches around his family's farm near Ashland as workers burned it.

Now, Wallace is working tirelessly to make hemp his livelihood.

Illinois farmers bet big on hemp this season, the first in which it was legal to grow the crop. But growing hemp — a cousin of the marijuana plant known for its use in foods, fibers and the wildly popular CBD products — proved risky. Farmers had to learn on the fly about a crop that hadn't been grown in Illinois soil for generations, and many with successful harvests are struggling to find a market for it.

Mother Nature was the main antagonist this year. Historic rains and flooding drowned many young plants. Some farmers lost all their hemp. So far, about 520 farmers have reported to the state that they have hemp to harvest. The state doesn't keep data on the size of the crop or how the plants fared.

Proposed Illinois law would require testing of all CBD items

Nationally, it's still too early in the harvest to know how well crops did and how CBD hemp prices will be affected, said Erica Stark, executive director of the National Hemp Association. CBD hemp prices vary, based on the amount of CBD, or cannabidiol, the plant contains, and it can be hard to predict at planting time what it will sell for, come harvest.

"There was a whole lot of talk about how much the market was going to flood this year because of so many new people and the expansion of acreage," she said. "But I don't think there were as many successful acres harvested as anticipated."

Hemp growers now face the challenge of finding a buyer or figuring out how to process it themselves.

"The people I know would probably be more excited about their first crop if they weren't so overwhelmed with trying to figure out what to do with it," Wallace said recently, standing among a few remaining hemp plants in his field. "There's a lot to worry about."

Wallace's hemp field in mid-October looked like a Christmas tree farm on Dec. 26. He was nearing the tail end of harvest and most of his crop was already hanging to dry in his shed and greenhouse.

He pulled a few bushy plants from the bed of his blue pickup and held them with one arm, showing off their density. Wallace, 50, estimates his crop will yield about 700 pounds of CBD hemp, and he is thrilled.

The crop's prospects weren't always so rosy. Typically, hemp would be planted in June and harvested in October, Wallace said. Days of rain and little sun stressed the seedlings he planted in May.

Before the season started, he had aspirations to plant 7,000 plants. Today, that number makes him laugh. He's learned how much his operation can handle. Ultimately, Wallace harvested about 800 plants.

He declined to speculate how much he might make off the hemp. But he isn't worried about the cantaloupe, watermelon and pumpkins he skipped this year because he was watering hemp instead.

"I missed that," he said. "But this should replace it."

The best flowers from a CBD hemp plant, which resemble marijuana buds, can be dried and smoked like marijuana, but without the high. In other states, those dried flowers have brought in between $25 and $200 per pound, according to a 2018 report from Hemp Industry Daily.

The other flowers, leaves and small branches of the plant, sold for between $10 and $25 a pound, are typically dried and sold to processors, who extract the CBD and infuse it into bath bombs, caramels and other products. People use those products or smoke CBD flower for the therapeutic benefits, such as relaxation or to help sleeping.

Hemp with higher CBD content often has more THC, a cannabis compound that gets users high, and that's risky.

If the plants "run hot," as farmers say, and contain more than CBD's legal limit of 0.3% THC, they must be destroyed. So far in Illinois this year, no hemp crops have tested too high, said Krista Lisser, spokeswoman for the state Department of Agriculture.

In Paris, Illinois, Eli Wiley planted 6 acres of CBD hemp and about half of it survived.

It wasn't Wiley's first time growing the crop. The 25-year-old worked on a CBD hemp farm in Colorado, and moved back to Illinois to try the crop here this year.

Getting used to the humid and wet Midwestern climate was an adjustment, and paired with the excessive rain, Wiley's crop didn't turn out as well as he'd hoped. He should have gotten 3,000 pounds of hemp from the 3 acres that survived. Instead, he expects less than one-third of that.

"Next year's going to be better," Wiley said.

Seventy miles south, Kurt Holscher had luck with a different kind of hemp.

After harvesting a green bean crop in July, he planted 70 acres of hemp for fiber in the same Lawrence County field. Holscher plans to take the seeds off of the plants first to be sold to a seed company, then chop down the 6-foot-tall stalks, let them dry for a few weeks in the field and bail them.

The type of hemp Holscher grew can be used to make rope, clothing and more. Farmers can use equipment they already have to plant and harvest it, and many look to that type of hemp as a way to diversify from corn and beans.

But the market is still developing in Illinois, and that's a problem for farmers like Holscher. Illinois mills turned hemp into rope during World War II, but no one in the state currently processes hemp for fiber.

Holscher contracted with a processor in Kentucky, about 160 miles from his farm. Hemp is heavy, and that distance may be too far for the crop to be economically viable, depending on how the harvest turns out.

"That's a lot of trucking," he said. "To be full-scale, large-scale, we're going to have to have somewhere closer."

Les Dart, a farmer in the neighboring county, didn't get to harvest with his crop.

He planted 75 acres of hemp for fiber on his 3,700-acre corn and soybean farm in Oblong, a central Illinois community less than 20 miles from the Indiana state line. He lost the crop to rain shortly after planting, and replanted the field with soybeans.

"It was not an ideal year to try something new," said Dart, who plans to try again next year.

He's confident that eventually, there will be a robust market for the crop. Farmers need something besides corn and soybeans, he said.

"It's building an industry over which we have a little more control, rather than relying on politicians and foreign political concerns to dictate, to a great extent, the prices that we are going to receive," Dart said. "Hemp might give us another avenue to achieve profit."

Illinois ranks No. 1 nationally for soybean production and No. 2 for corn, both of which were either socked with or threatened by tariffs this year.

Rebecca Dwyer, a 24-year-old student in agricultural business, sees the same potential in the crop, even though she's calling the 5 acres of fiber hemp she planted on her family's farm in Woodford County a loss. But she knew going into it that she probably wouldn't make any money this year. This year was to learn.

"I don't think I could've picked a worse year to try and get started," she said. "That said, it'll only go up from here."

CHICAGO  — The new cannabis course at Oakton Community College is far from the blow-off class one might imagine. Students don't touch marijuan…

Illinois Department of Agriculture Director John Sullivan said Tuesday that interest in the newly-legalized hemp industry continues to build, but more work needs to be done for the industry to mature. 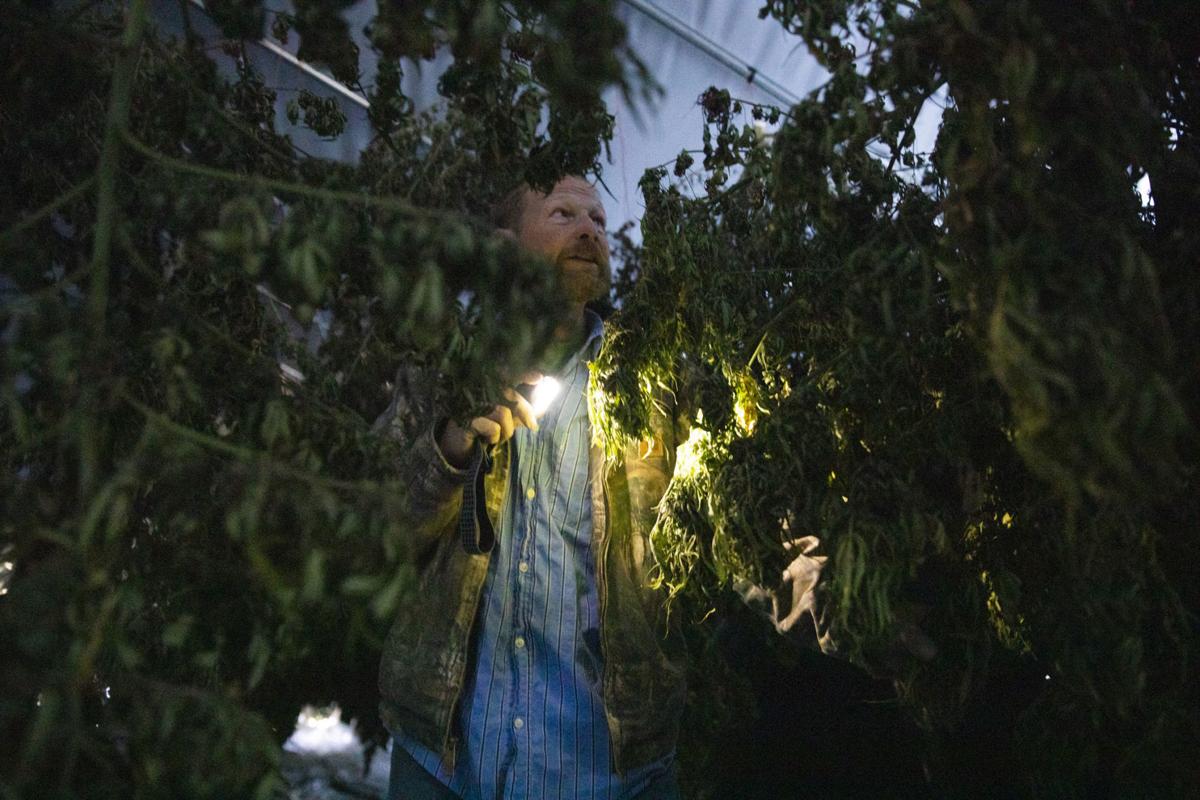 Farmer Chad Wallace checks on hemp to see if any plants are ready to be trimmed. 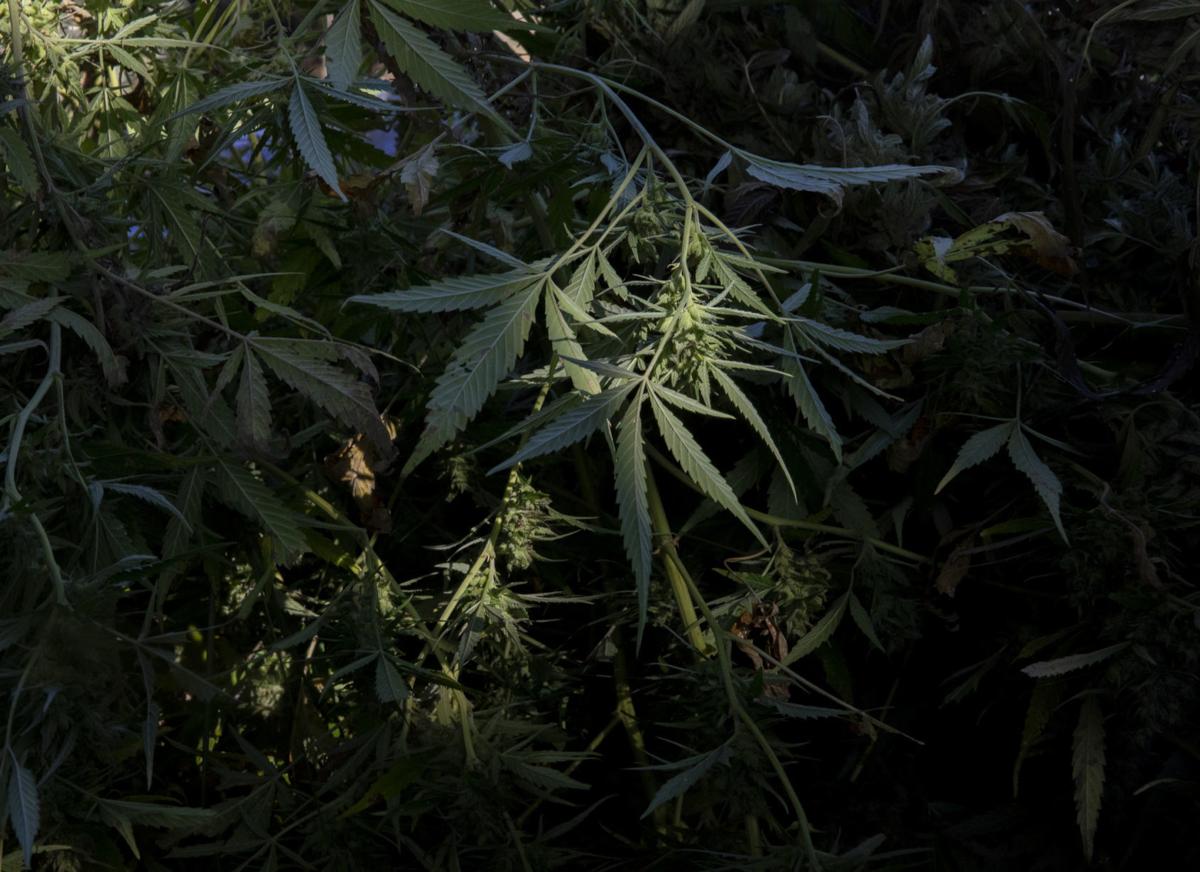 Hemp plants rest in the back of Wallace's pick up truck to be hung and dried in Ashland, Illinois, on Oct. 14. 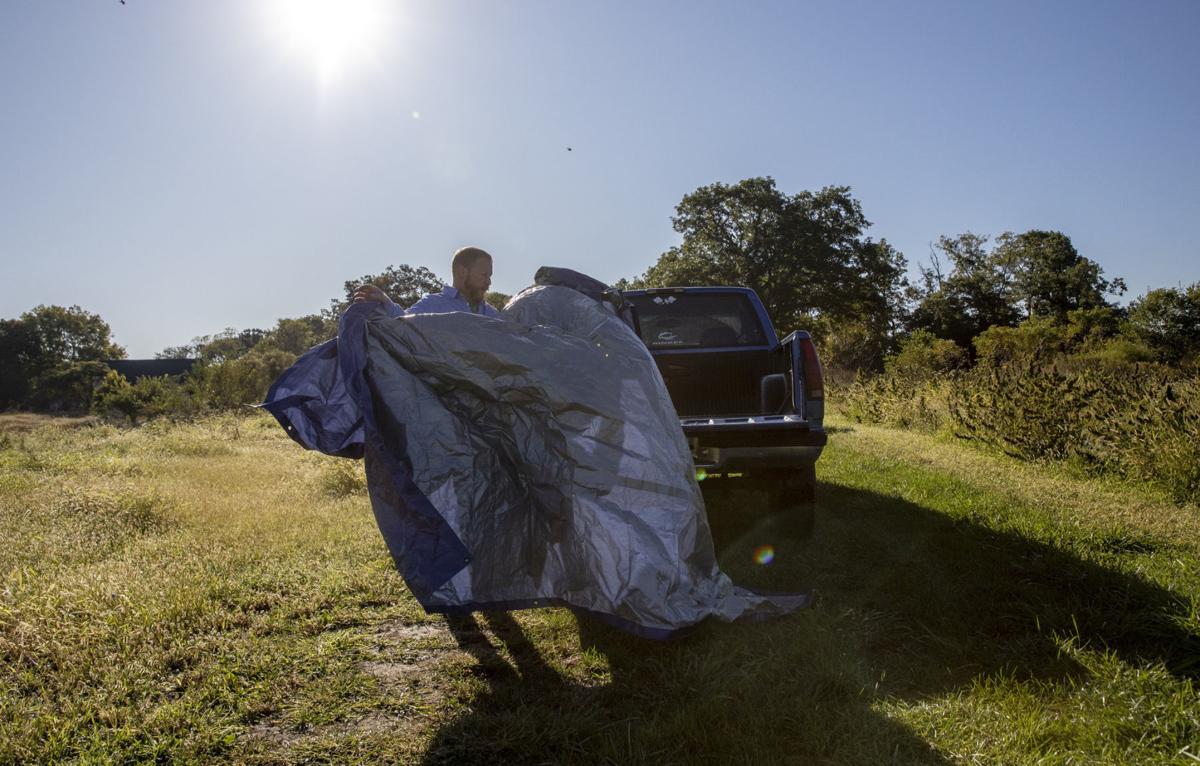 Farmer Chad Wallace lays out a tarp for hemp plants to sit in the bed of his truck before being hung and dried in Ashland, Ill. on Oct. 14, 2019. 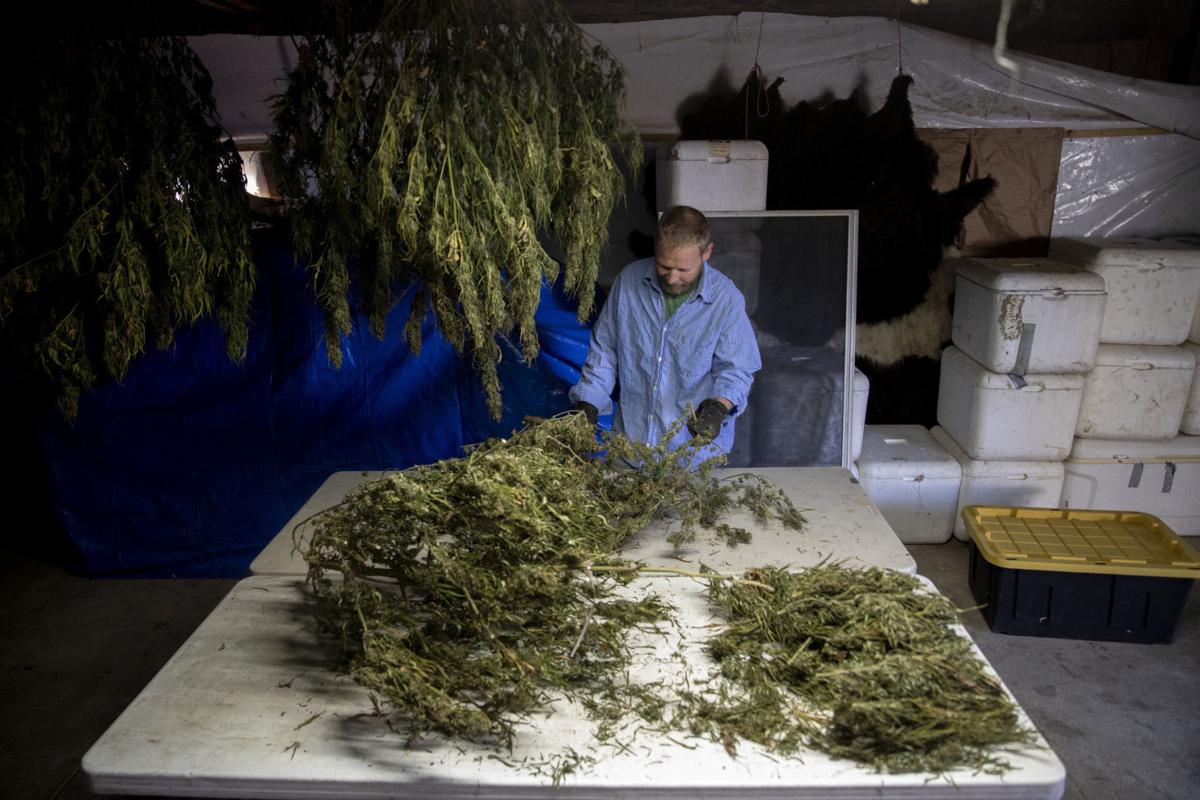 Chad Wallace trims hemp plants in a shed at his farm. Before the season started, Wallace had hopes to plant 7,000 plants. Ultimately, Wallace harvested about 800 plants.