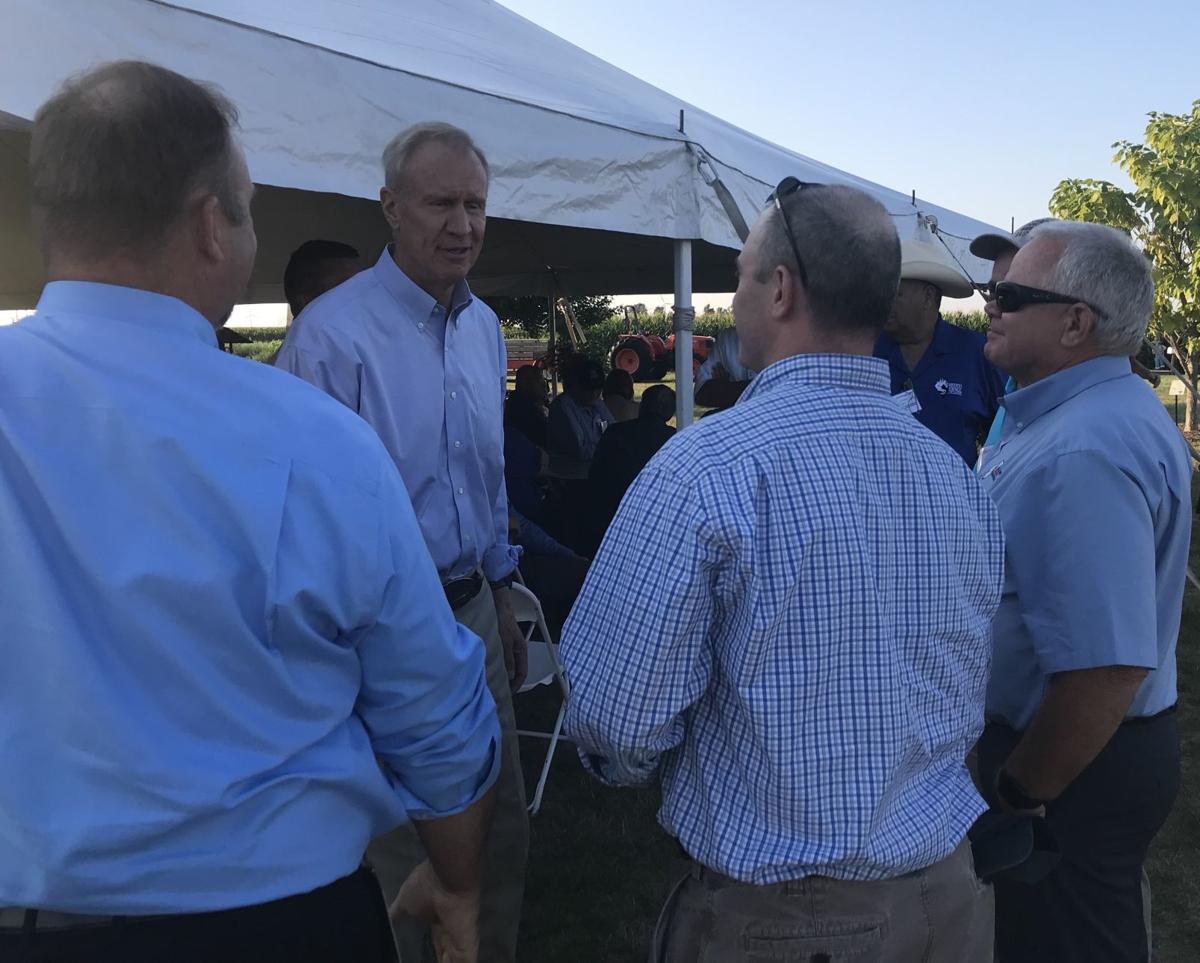 Republican Gov. Bruce Rauner addresses supporters after speaking Wednesday in Normal. Rauner and his Democratic challenger, J.B. Pritzker, both spoke to about 100 at the Illinois Agricultural Legislative Roundtable at Rader Farms. 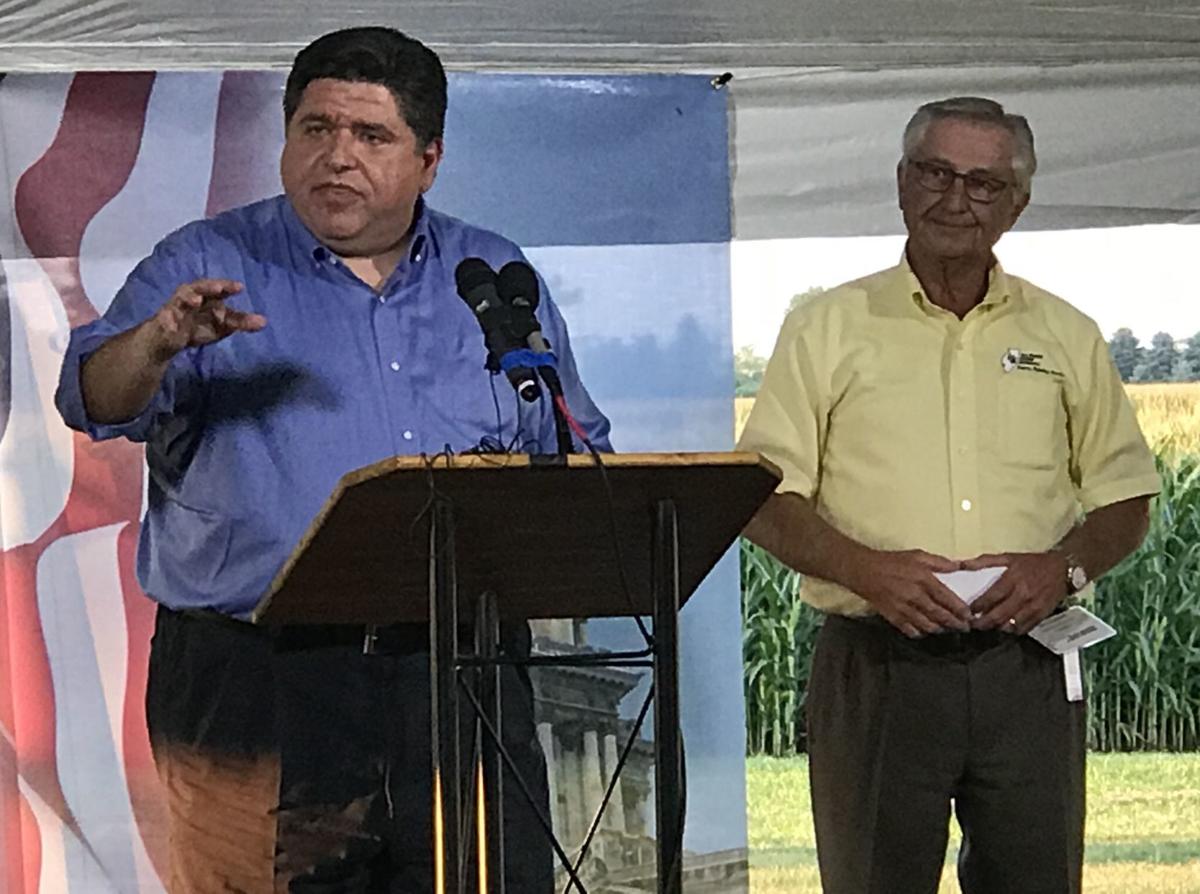 NORMAL — Despite their differences, both major-party candidates for Illinois governor zeroed in on the same message Wednesday: I'll cut your taxes, and the other guy will raise them.

After Republican Gov. Bruce Rauner said residents can expect him to freeze property taxes, stop a graduated income tax that he says hurts the middle class and oppose a mileage tax for drivers, Democratic challenger J.B. Pritzker said his graduated tax would cut taxes for most Illinoisans and that Rauner is poised to raise property taxes through pension changes.

"Pritzker has proposed a mileage tax on cars. ... Put a box in your car, measure your miles and pay a tax based on how many miles you drive,"  Rauner told reporters after addressing about 100 at the Illinois Agricultural Legislative Roundtable at Rader Farms. "That'll be devastating for farm families (and) anyone who lives in a small town or rural community."

Pritzker denied that he has such a plan but didn't back away from the idea entirely while addressing reporters after his remarks.

Rauner also denied Pritzker's claim that the governor's plan to make local government units like schools and universities pay their own pension costs would lead to rising property taxes for residents.

"I do not favor just dumping the liability on local taxpayers ... and I've never proposed that," said Rauner. "I would only do it by coupling it with unfunded mandate relief. We need local control of competitive bidding and consolidating. ... You can more than make up the difference for having to chip in some portion of a teacher's pension cost."

Rauner, a Winnetka businessman, and Pritzker, a Chicago heir of the Hyatt hotels empire, also addressed ag while speaking to farmers in rural Normal.

On that subject they often agreed: each supports existing sales and property tax exemptions for farmers and maintaining the Livestock Management Facilities Act, which sets specific standards for livestock facilities in Illinois.

Those are among the highest priorities of the roundtable, which includes advocacy groups, businesses, educators and elected officials in the field.

The men differed somewhat on the estate tax, which Rauner said he supports abolishing entirely, partly because it hurts family farmers who want to pass them down across generations. Pritzker said he hopes to keep the estate tax from hurting farmers but didn't come out completely against it.

On ethanol-based fuels E-85 and E-15, however, Pritzker was more assertive, saying he completely supports sales tax exemptions to encourage farmers to work with those alternative energy sources. Rauner said he would like to negotiate some kind of new policy.

"I have been very involved in talking to members of congress and have gone to the White House several times to talk about trade specifically and tariffs," said Rauner. "Tariff wars ... can be devastating. We can lose more jobs in Illinois. Farm families can be harmed in Illinois, and we can lose manufacturing in Illinois."

Pritzker criticized Rauner, however, for not reaching out to Illinois Democratic U.S. Sen. Dick Durbin during Rauner's term, a charge Durbin made during a visit to Bloomington last week.

SPRINGFIELD — GOP Gov. Bruce Rauner on Wednesday was joined by an Illiopolis boy to sign legislation that requires Illinois insurers to pay re…

DECATUR — The state is issuing a $200,000 payment for improvements to the Decatur Civic Center, part of a grant that was suspended.

DECATUR — As he worked the room Tuesday at Stripmasters Services Inc., Republican Gov. Bruce Rauner painted this November’s election as a star…

With 80 days until the election, Davis and Londrigan both confident in 13th District support

Political pundits say an effort to unseat U.S. Rep. Rodney Davis may be gaining traction, but that's not what the three-term Taylorville Repub…

Former Gov. Jim Edgar, once against casinos, now favors one

CHICAGO — Former Illinois Gov. Jim Edgar, once an opponent of land-based casinos, now says he favors casino expansion, including one in Chicago.

Republican Gov. Bruce Rauner addresses supporters after speaking Wednesday in Normal. Rauner and his Democratic challenger, J.B. Pritzker, both spoke to about 100 at the Illinois Agricultural Legislative Roundtable at Rader Farms.