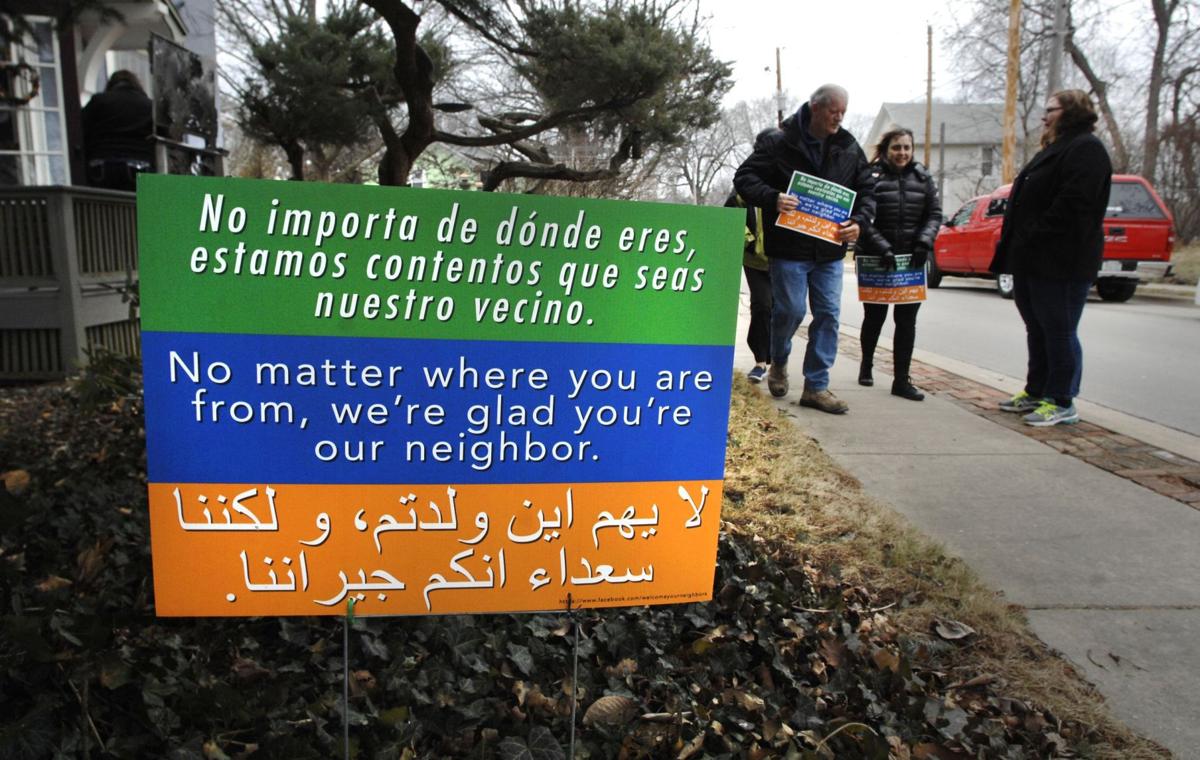 A pro-diversity sign stands in the front yard of Herb and Pam Eaton's home in Bloomington. 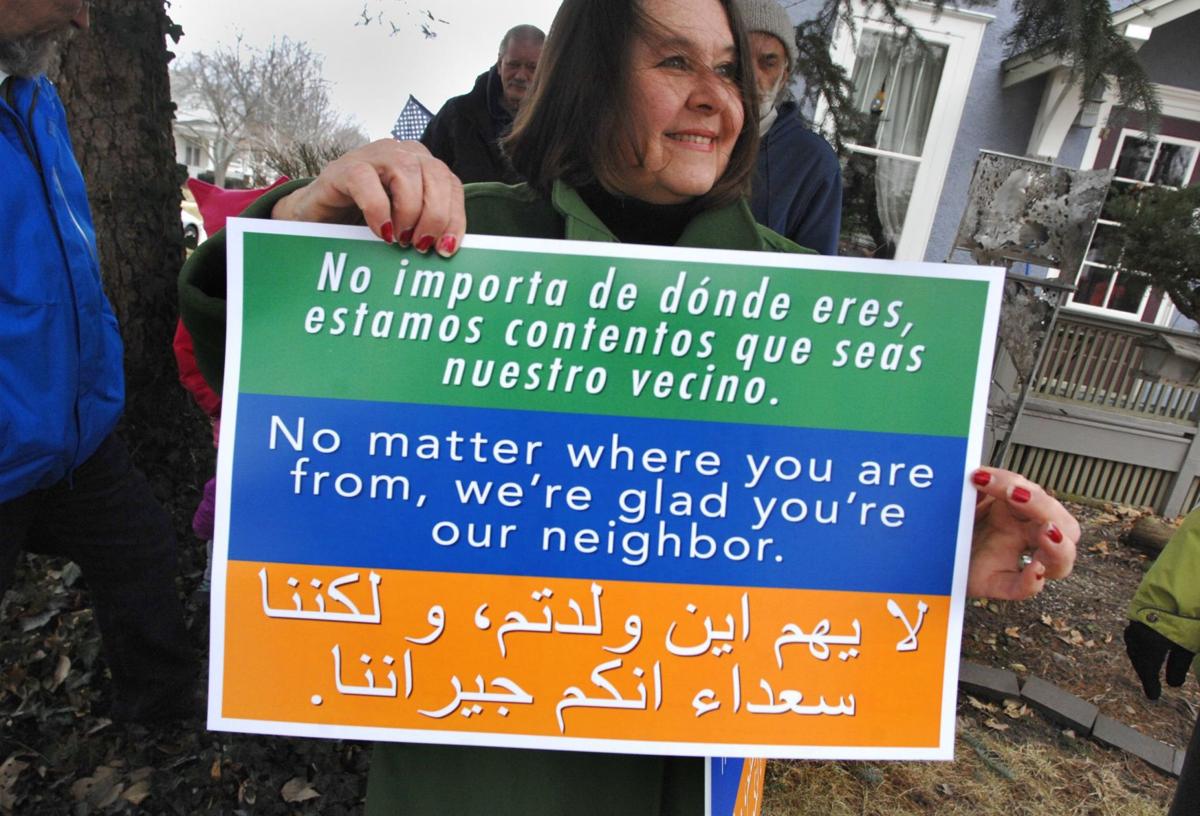 Pam Eaton holds a pro-diversity sign in the Dimmitt's Grove neighborhood in Bloomington. 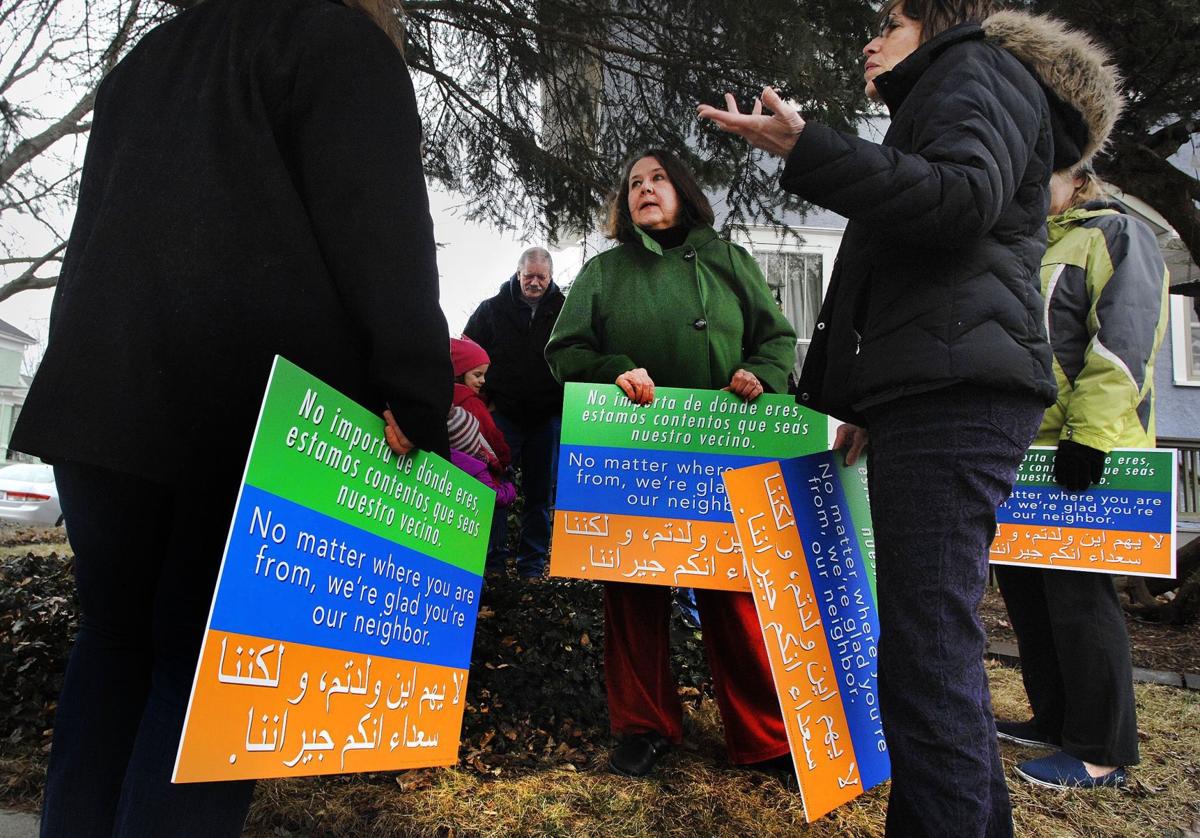 Pam Eaton, center, and Mary Aplington of Not in Our Town, gather for a Dimmitt's Grove neighborhood meeting in Bloomington.

From churches to big business and community organizations, a strong chorus of opposition rose up Monday in the wake of President Donald Trump's crackdown on Muslim immigration.

Decatur's First Presbyterian Church is among Central Illinois organizations that have been at the forefront of an effort to embrace, rather than reject, Muslim culture, and the church said Monday it plans to go right on doing that.

Members of the congregation already have forged close ties with the Greater Decatur Islamic Center and have helped out previously with drives to collect everyday items, such as formula and diapers, to aid Syrian refugees.

Muslims have also attended church services as guests, and spoken in church classes. The congregation of First Presbyterian joined with Central Christian Church and the Islamic Center to together watch the movie “He Named Me Malala,” about the Pakistani girl almost killed by a Taliban gunman when she was 15 for daring to attend school.

Leaders of First Presbyterian said just as the church stepped forward a generation ago to stand with African-Americans in the battle for civil rights, it now stood with Muslims it feels are being unfairly targeted by Trump's temporary immigration restrictions.

“I think the majority of the congregation members, and I've heard from a lot of them, are not supportive of the president's executive orders on immigration,” said the Rev. Jean Wollenberg, who co-pastors the church with her husband, the Rev. Bob Wollenberg.

“And I think the majority of this congregation will now try to redouble our efforts to work with them (Muslims),” added Jean Wollenberg. “We will stand with them.”

Elsewhere in Central Illinois, “Not in Our Town Bloomington-Normal” is sponsoring a community solidarity rally at 6 p.m. Wednesday inside the Bloomington Center for the Performing Arts. The theme is "Supporting Our Neighbors."

"Due to recent presidential actions targeting particular nations, Not In Our Town wants to show its support for diverse people, immigrants and different faith communities that are part of the McLean County community,” said a statement from the organization, which was formed to combat hatred, discrimination and bullying.

Muslim community members plan to participate in the NIOT rally, which will open and close with words from faith traditions, said Mohammed Zaman, president of the Bloomington mosque, Masjid Ibrahim.

"The community's support continues to be overwhelming," said Zaman on Monday.

Bloomington's State Farm Insurance, whose employees include people of East Asian, Indian, Pakistani and Hispanic ethnicities, said in a statement: “We are committed to an inclusive environment at State Farm, where all our associates and customers are treated with respect and dignity, and differences are valued."

“YWCA McLean County stands strong in support of immigrants, refugees and asylees and condemns the actions of the president," Carrillo said.

Dimmitt's Grove Neighborhood Association, NIOT and YWCA McLean County have partnered to provide "Welcome Neighbor" yard signs with the message  — “No matter where you are from, we're glad you're our neighbor" — printed  in Spanish, English and Arabic.

About 300 signs are in yards or spoken for, but since Thursday “we had orders for 227 more — most of those orders coming in since Saturday,” said Aplington. "We're all out and I've ordered 300 more."

DECATUR – Inas Mahmood of Forsyth, a junior at the University of Illinois, will never forget the sights and sounds she experienced at the Zaat…

SPRINGFIELD — Illinois Senate Democrats, contending that immigrants are hiding in their homes because of aggressive actions by President Donal…

A pro-diversity sign stands in the front yard of Herb and Pam Eaton's home in Bloomington.

Pam Eaton holds a pro-diversity sign in the Dimmitt's Grove neighborhood in Bloomington.

Pam Eaton, center, and Mary Aplington of Not in Our Town, gather for a Dimmitt's Grove neighborhood meeting in Bloomington.