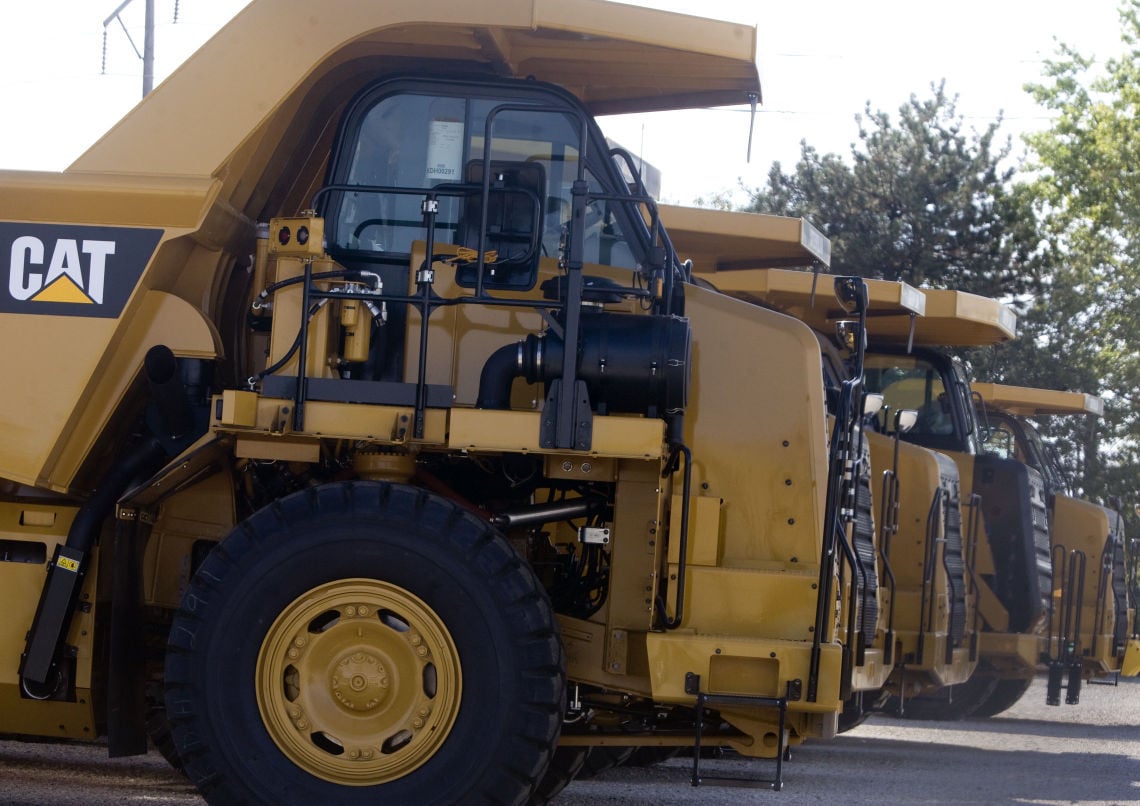 In this file photo trucks await delivery in one of the storage lots near the plant in Decatur. 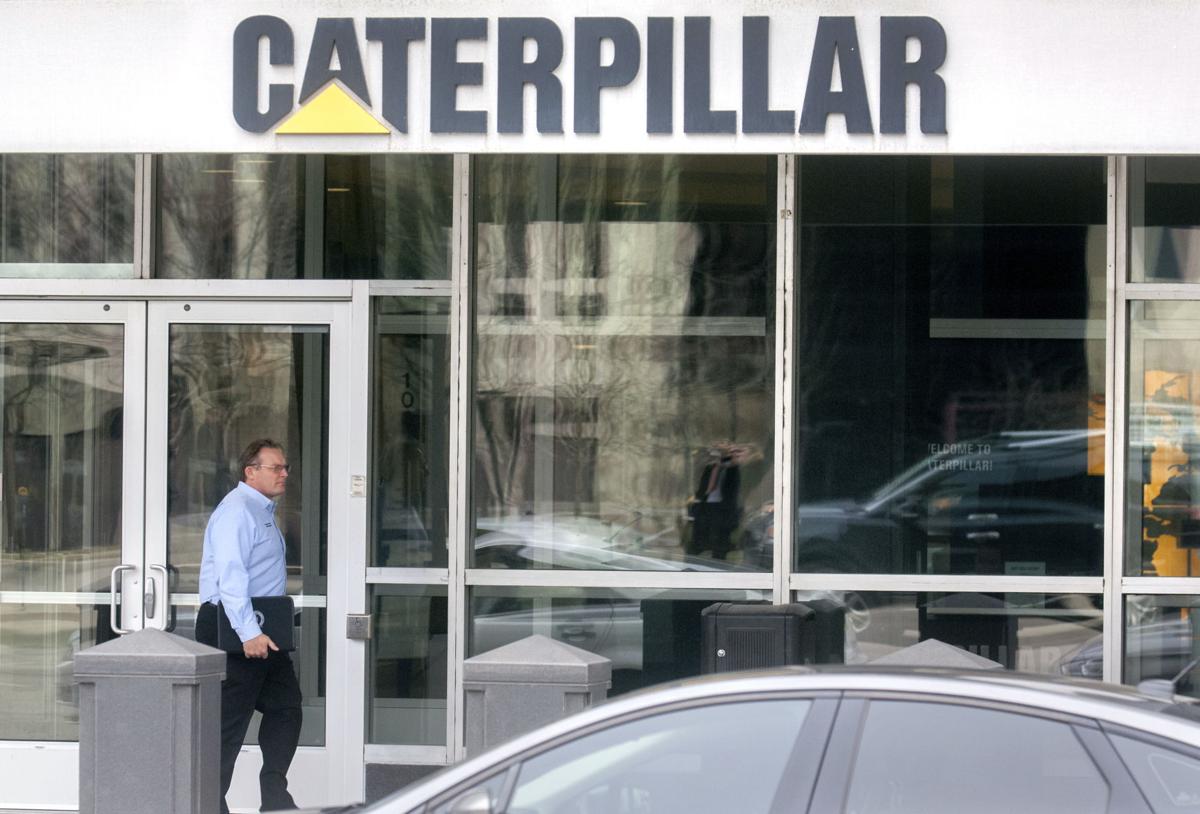 Steve Settingsgaard, head of North American security for Caterpillar Inc., walks past the entrance to the company's world headquarters on March 2. The company on Friday announced that large wheel loaders and compactor production will be moved to the Decatur plant.

DECATUR — Caterpillar Inc. plans to move about 500 jobs to Decatur following the closure of its Aurora plant, the company said Friday.

"Out of about 800 production positions, about 500 positions would likely be added to Decatur and about 150 positions would be added in North Little Rock," spokeswoman Lisa Miller said in a statement Friday afternoon. "We anticipate some will move to various suppliers and some positions would also be eliminated."

The transitions are expected to be complete by the end of 2018.

“Moving production from Aurora to other existing facilities allows Caterpillar to efficiently leverage manufacturing space while still preserving capacity for an upturn,” said Denise Johnson, Caterpillar group president of Resource Industries. “Supporting impacted employees through this transition is a top priority, as we know these actions are difficult for our talented and dedicated people.”

The company does plan to maintain an Aurora office for engineering and product support work.

The move is a testament to the quality of employees already in Decatur and a sign that the city can supply the needed additional workers, said Ryan McCrady, president of the Economic Development Corp. of Decatur and Macon County.

It could send a positive ripple effect across the community. A manufacturing job in Decatur supports three-and-a-half other jobs in the economy, McCrady said. Increased wages in a community bring more attention from retailers, too.

Though the news is exciting, McCrady offered sympathy to the Aurora workers and community that would be affected.

“We like to win but we're respectful of the fact that people's lives are impacted here,” he said. “Decatur's a great place and we'll welcome them, and welcome the opportunity to help Caterpillar.”

As the company ramps up its staff, McCrady said the EDC would stand ready to provide support, along with city staff, Workforce Investment Solutions, the Greater Decatur Chamber of Commerce, Richland Community College, Millikin University and other entities.

City Manager Tim Gleason echoed that sentiment. He said the city has extended an open-ended offer to help the company with recruitment, workforce development and even incentives if there was a possibility for plant expansion.

No incentives were part of the decision to bring the Aurora jobs to Decatur, he added.

“We are really fortunate that Caterpillar wants to expand their footprint here in this community,” he said. “We must be doing something right.”

The news brought mixed emotions for Toby Short, an employee of Decatur's Caterpillar plant. He felt empathy for the workers in Aurora, whom he considers brothers and sisters through their shared union membership, and hoped the best for them.

“That's our sister facility,” he said. “We're all affiliated together.”

At the same time, Short has enjoyed a 17-year career at Caterpillar in several different positions, and his father has been with the company for almost 52 years. He knows the opportunities those jobs will create for young people in a city that has experienced so many manufacturing job losses.

The move is part of Caterpillar's ongoing efforts to save money in the face of a four-year-old slump in sales.

The company, founded in 1925, has had several rounds of layoffs in recent years. In 2015, it announced 10,000 positions would be reduced and 20 facilities shuttered nationwide by 2018. Cuts and restructuring would save an estimated $2 billion per year.

This month, it was announced the Caterpillar plant in Elkader, Iowa, was closing, cutting 75 jobs. The plant makes excavator buckets, wheel loader buckets and blades for heavy machinery. Operations are being moved to a facility in Wamego, Kansas.

In January, Caterpillar announced plans to move its global headquarters and about 300 top jobs to the Chicago area after decades in Peoria.

Friday's announcement comes days after United Auto Workers members from 11 Caterpillar facilities across Illinois and Pennsylvania approved a six-year-contract with the company.

The company also has been under fire in recent weeks for issues relating to Caterpillar SARL, a Swiss parts subsidiary, and tax-saving practices that have prompted a Senate investigation, shareholder lawsuits and proposed penalties totaling $2 billion.

Federal authorities raided the Peoria offices earlier this year. Former U.S. Attorney General William P. Barr was named outside counsel for the company in mid-March, charged with sorting out the issues related to the government investigation.

The company’s chairman and former CEO, Doug Oberhelman, also was among two dozen manufacturing CEOs who met with President Donald Trump at the White House in early March, committing to restoring factory jobs lost to foreign competition. Trump is proposing a $1 trillion plan to shore up the nation's roads, bridges and airports as part of an infrastructure improvement effort.

The company could be stripped of its ability to bid for federal contracts as part of the Caterpillar SARL matter.

Caterpillar in January reported a fourth-quarter loss of $1.17 billion on revenue of about $9.6 billion.

Caterpillar jobs: At a glance

What happened: Caterpillar Inc. on Friday announced the closing of its facility near Aurora, and the lay off of 800 workers.

Financial factors: Earlier this year, the earth-moving equipment maker said it would lay off employees in 2017 because of an anticipated decline in demand for its products. Caterpillar in January reported a fourth-quarter loss of $1.17 billion on revenue of about $9.6 billion.

How to decide what kind of business to open

How to decide what kind of business to open

How to curb impulse buys and stick to your budget

How to curb impulse buys and stick to your budget

PEORIA – Caterpillar Inc.'s tax woes came back to haunt it again Thursday morning with news of a search warrant executed by federal agencies a…

Decatur’s RadioShack is among hundreds of stores being closed by the company following its second bankruptcy filing last month.

DECATUR — Ed Rapp, who once headed Caterpillar's Resource Industries division, visited the Decatur factory Monday to talk about his most chall…

Save manufacturing, save the middle class

Thumbs up, thumbs down

THUMBS UP! To the victors – and to the unsuccessful challengers – in Tuesday's elections. Unlike many races throughout the state of Illinois, …

NEW YORK CITY – Caterpillar Inc. is getting ready to fire up production to meet the demand it's gambling will get back on track — eventually.

"When you think about having all those jobs and all the people that are not working, there's a big disconnect in the middle."

DECATUR — Local job trainers and the business community are mobilizing to make sure 250 open positions at Decatur's Caterpillar Inc. facility …

In this file photo trucks await delivery in one of the storage lots near the plant in Decatur.

Steve Settingsgaard, head of North American security for Caterpillar Inc., walks past the entrance to the company's world headquarters on March 2. The company on Friday announced that large wheel loaders and compactor production will be moved to the Decatur plant.