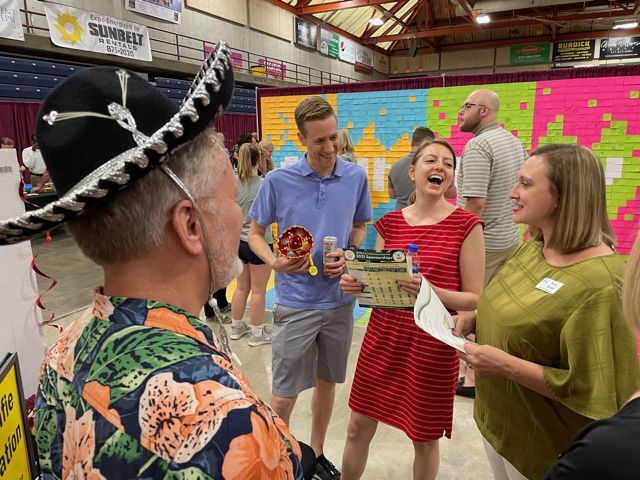 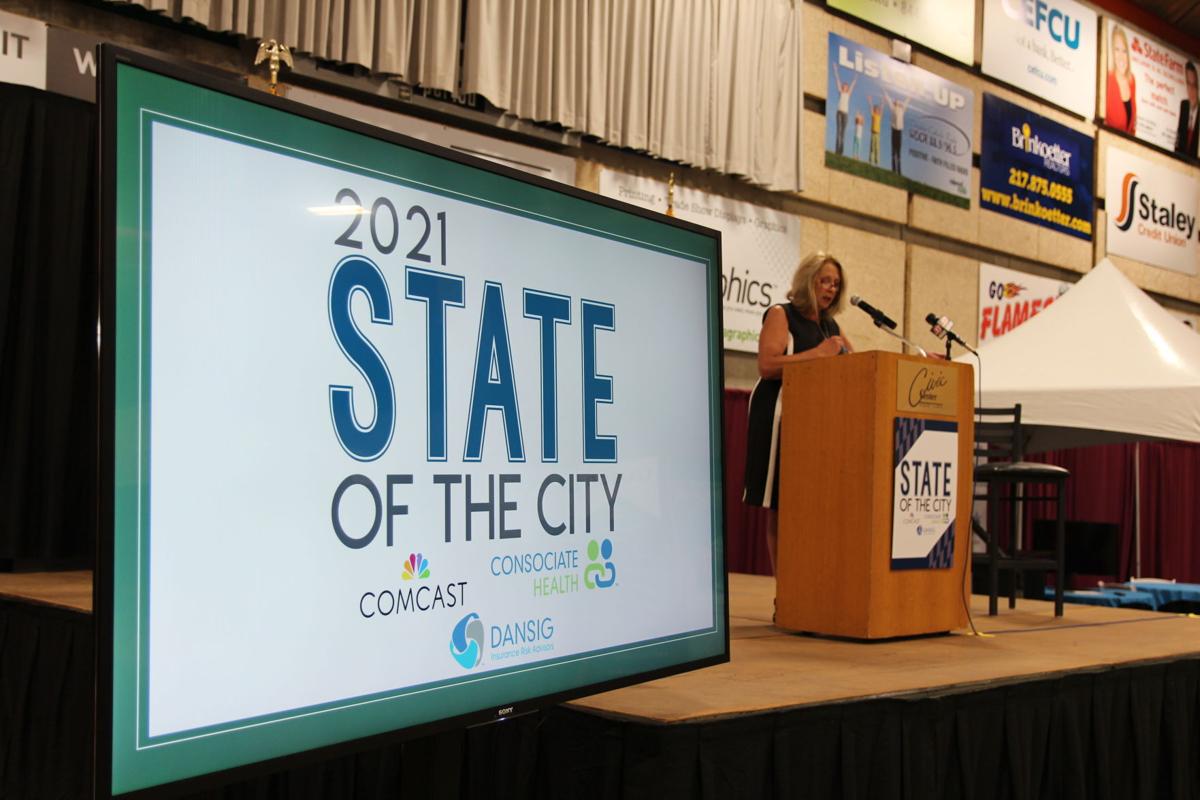 Decatur Mayor Julie Moore Wolfe delivers her State of the City address during a Decatur Regional Chamber of Commerce breakfast event ahead of the Chamber Business Expo. Moore Wolfe reviewed the challenges of the past year , while offering updates on a few projects that are ongoing or planned in the coming months. 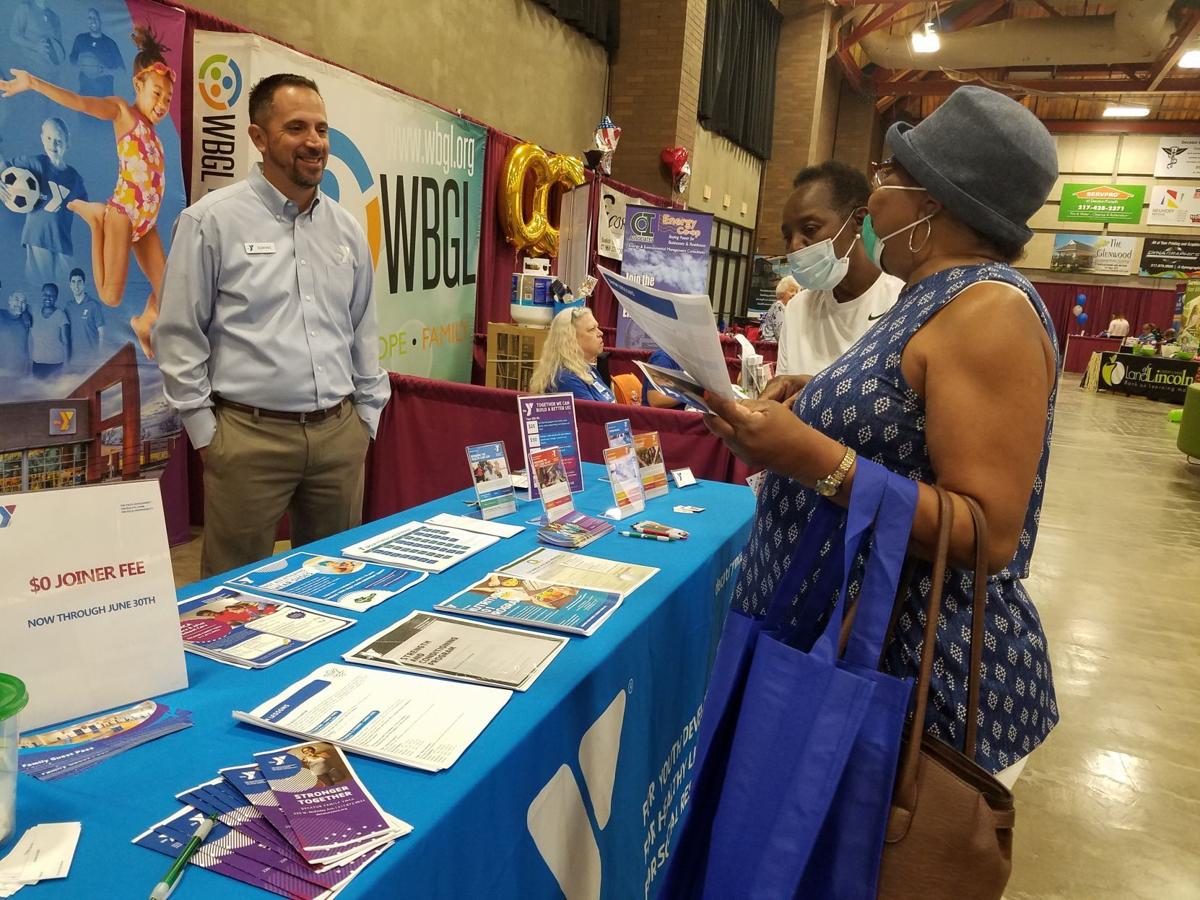 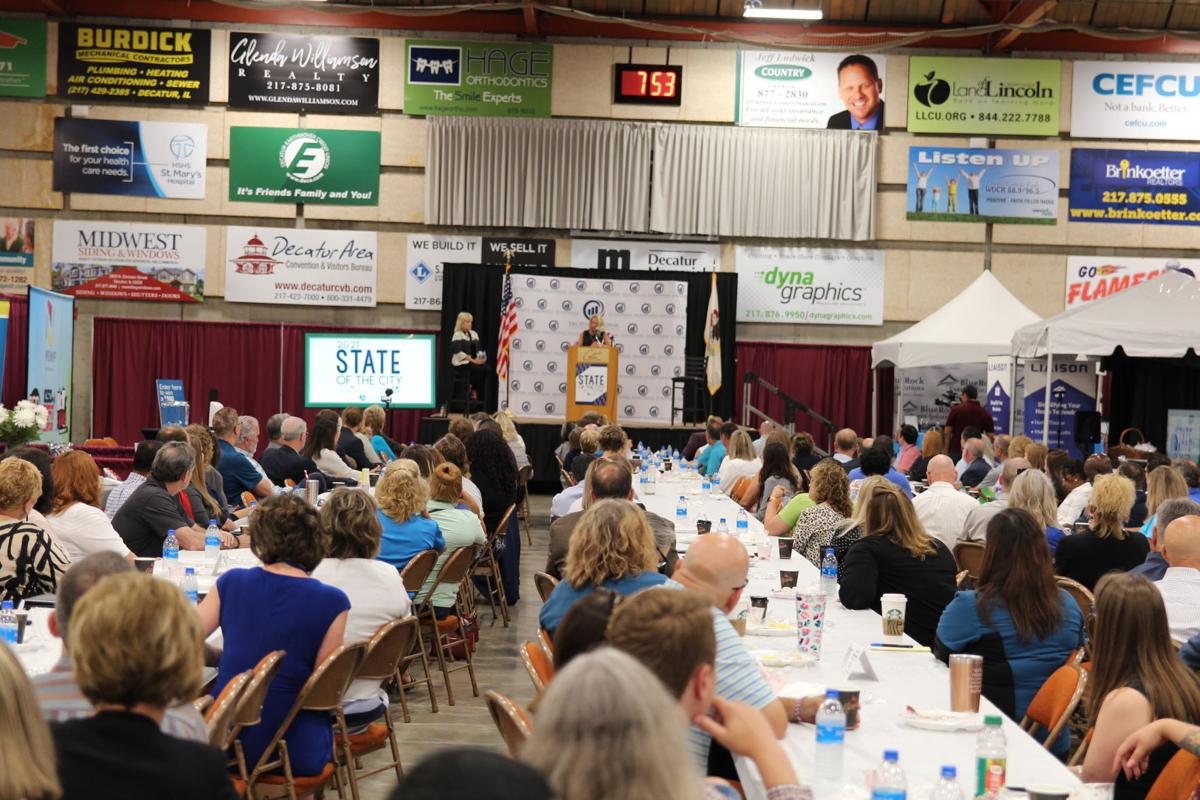 A good crowd was on hand Thursday for the State of the City Breakfast at the Decatur Civic Center. The event, canceled last year because of COVID-19 pandemic, was held on the eve of the move to Phase 5 of the Restore Illinois plan, which eliminates nearly all coronavirus restrictions.

DECATUR — As she cut the ribbon opening the annual Decatur Regional Chamber of Commerce Business Expo Thursday morning, Mayor Julie Moore Wolfe summed up the feeling in the room in three words: "Decatur is back."

The optimism was palpable as the annual event, which included a showcase of more than 60 local businesses and vendors, a VIP Party on Wednesday evening and Moore Wolfe's State of the City address Thursday morning, took place on the eve of the Illinois' Phase 5 reopening.

Starting Friday, all state businesses, large-scale events, conventions, amusement parks and seated venues will be able to operate at full capacity for the first time since the onset of the COVID-19 pandemic in March 2020.

Moore Wolfe, who spent the bulk of her 25-minute address looking back at the city's response to the challenges of the previous year-and-a-half, said it was now time to move forward.

"We have come through the greatest nightmare any of us could ever have imagined," Moore Wolfe said in her address. "We can sure as hell fix this town. We've been to hell and back, and we're ready to move on."

Moore Wolfe said "it is so good to see faces" following the dropping of the mask mandate for fully vaccinated people. Almost none of the hundreds of attendees were wearing face masks Thursday.

But even with cases declining and businesses fully reopening, the region has some work to do, Moore Wolfe said, as COVID-19 vaccination rates continue to lag the state average.

As of Thursday morning, just over 34% of county residents were fully inoculated compared with 44% for the state as a whole.

"We're not where we need to be in Macon County, I'll be very honest with you," Moore Wolfe said. "... We can do better."

Later Thursday, the Macon County Health Department reported six new positive cases. It brings the county's total to 10,998 cases, including 206 deaths. Five are currently hospitalized and 180 are in home isolation.

The low numbers match the state's. Just 366 new cases were reported in Illinois on Thursday, including 18 deaths. The state's seven-day rolling positivity rate is 1.3%.

Most of Moore Wolfe's address focused on COVID-19, but she also made point to mention some key projects and initiatives.

The state legislature recently approved a bill that would give the city quick-take authority to acquire three parcels of land needed for the project. Moore Wolfe said Gov. JB Pritzker has assured her he will sign the legislation and she expects bids to go out this summer.

Moore Wolfe also encouraged city residents to drive by the new Johns Hill Magnet School, which will welcome students this fall, along with the other improvements taking place in the neighborhood.

Many of the improvements have been funded by the Howard G. Buffett Foundation.

"We are turning that into the cornerstone of our neighborhood revitalization efforts," Moore Wolfe said. "It's what the rest of this community can look like as we rebuild streets and sidewalks, and we take those homes and raise them to a new level and those kids get to go to school in a neighborhood school. It is what Decatur can be."

For many businesses represented at the Chamber Business Expo, it was the first opportunity to reach out to the community after a year of struggles.

Decatur Family YMCA CEO Dominic Santomassimo and his staff had a rough year in 2020. “The Y had four shut downs,” he said. “It caused a lot of revenue loss.”

Facilities similar to the YMCA had to maintain their buildings with little or no funds coming in. “Just operating the building still remains, even though we don’t have any members coming in,” Santomassimo said.

The YMCA has opened, but with safety still a concern. The staff is optimistic for the future. “But it’s not like a light switch,” Santomassimo said. “It’s more like a dimmer switch.”

Corporate Image owner Susan Head described the past year as quiet. “But it started out strong,” she said.

“When special events started getting cancelled, then orders were stopped,” Head said.

However, Head had a few customers who were able to support the business while others were shut down. “It was for employee gifts mainly, rather than special events or giveaways,” Head said.

With the state opening up again, Head is hopeful special events will continue.

Unlike other business at the expo, Amanda Pharis, Blue Rock Event Solutions manager, had a productive year. The event company had pursued another business, Hite Tent Rental, shortly before the pandemic hit Illinois. The rental company provided tents and other resources for special events. By April 2020, the tent business was booming. “And they were still interested in selling,” Pharis said.

Although corporate parties and weddings were no longer being planned, the need for outdoor rooms was important for many businesses' survival. “It allowed for testing sites or the outdoor break rooms,” Pharis said. “Tents were one of the few venues that had no restrictions.”

Now that groups are able to gather together, the business has grown to include event consultation with other resources including music, food and linens.

Blue Rock's original company, Blue Rock Records, was also busy during the past year. Instead of touring, musicians spent more time creating music. “They are putting their heart and soul into their recording,” Pharis said. “That project they’ve been putting off for years, well now they might as well get in the studio to record it, because they can’t do anything else.”

According to Brian Reed, on premise sales manager for Pepsi, the beverage company experienced an ebb and flow in the industry. “Our take-home business exploded,” he said. “Everybody ran to the stores and was purchasing water and beverages, because they couldn’t go anywhere else to eat.”

However, restaurants, schools, recreational events and hospitals were closed to the public and didn't need to stock their facilities with beverages. “All of that stopped almost completely,” Reed said.

The company is optimistic about the summer season. “We’re seeing people more excited, wanting to get out and do things,” Reed said.

Reed was cautious to say events will be back to a pre-pandemic normal. “But we see it getting better everyday,” he said. “Not only for us but for our customers too.”

One of the dilemmas for Pespi’s customers is the need for employment. “We’re not fully back because a lot of these places are not able to be fully staffed yet,” Reed said. “That’s been a challenge.”

Chamber President Mirinda Rothrock said she was pleased with the outcome of the 2021 Chamber Business Expo.

“We’re just thrilled that we were able to take this first step forward,” she said. “This is part of the healing process and being able to move forward and take a positive step.”

Watch now: Community Wall to highlight what people like about Decatur, Macon County

The Community Wall is one of the features during the events tied to the Chamber Expo, hosted by the Decatur Regional Chamber of Commerce and the Herald & Review, on Wednesday evening and most of the day Thursday.

Stephan Birt and brother Bradan Birt wanted a juice bar with a healthy option that also highlighted the city.

An inspection found "live cockroaches and evidence of rodent activity," according to the report. Read it here.

Forgotten expenses you should remember to budget for

Forgotten expenses you should remember to budget for

Decatur Mayor Julie Moore Wolfe delivers her State of the City address during a Decatur Regional Chamber of Commerce breakfast event ahead of the Chamber Business Expo. Moore Wolfe reviewed the challenges of the past year , while offering updates on a few projects that are ongoing or planned in the coming months.

A good crowd was on hand Thursday for the State of the City Breakfast at the Decatur Civic Center. The event, canceled last year because of COVID-19 pandemic, was held on the eve of the move to Phase 5 of the Restore Illinois plan, which eliminates nearly all coronavirus restrictions.