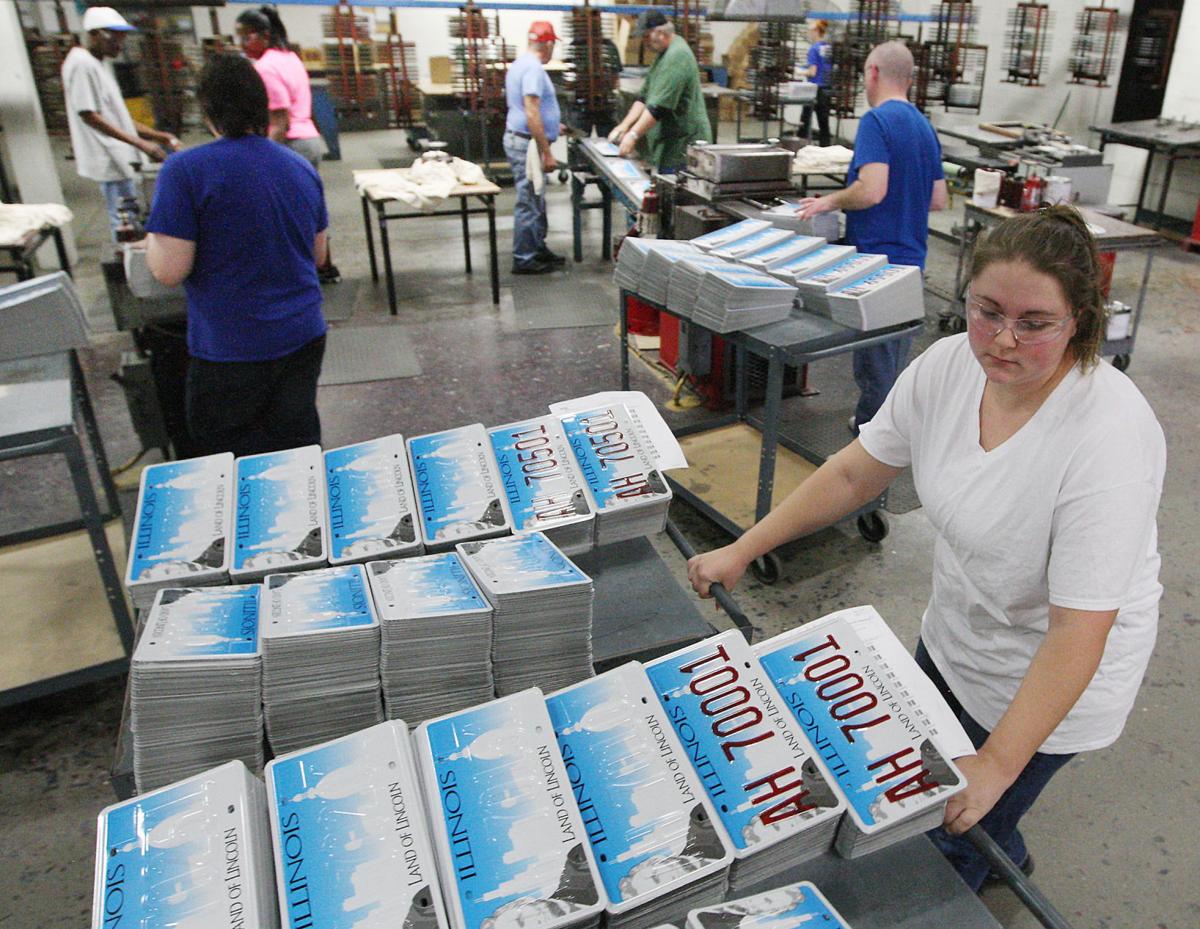 In this November 2016 photo, Ashley Younker moves license plates in place to be roller coated at MRI (Macon Resources Inc.) in Decatur. MRI has been manufacturing Illinois' license plates since 1983. 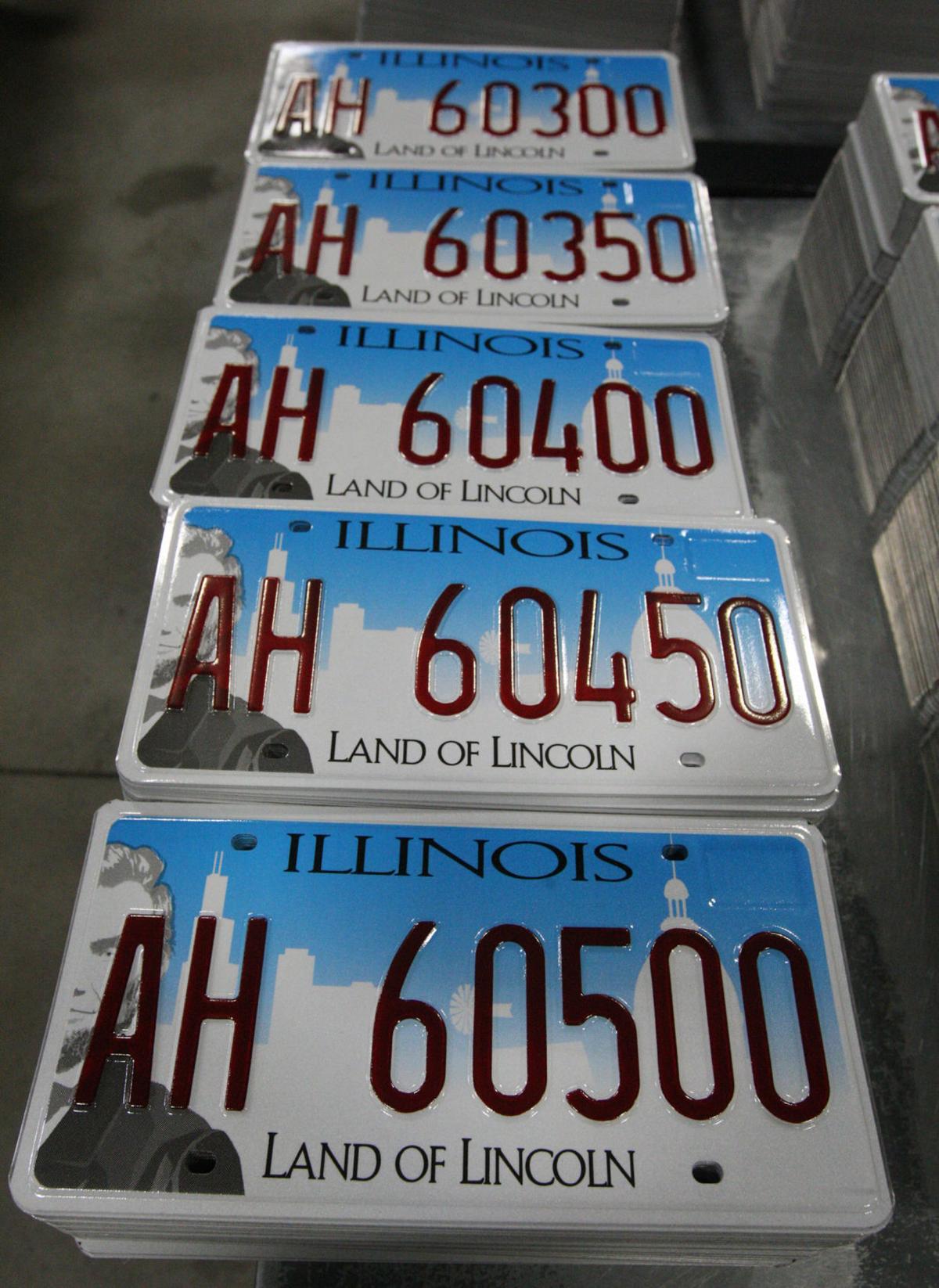 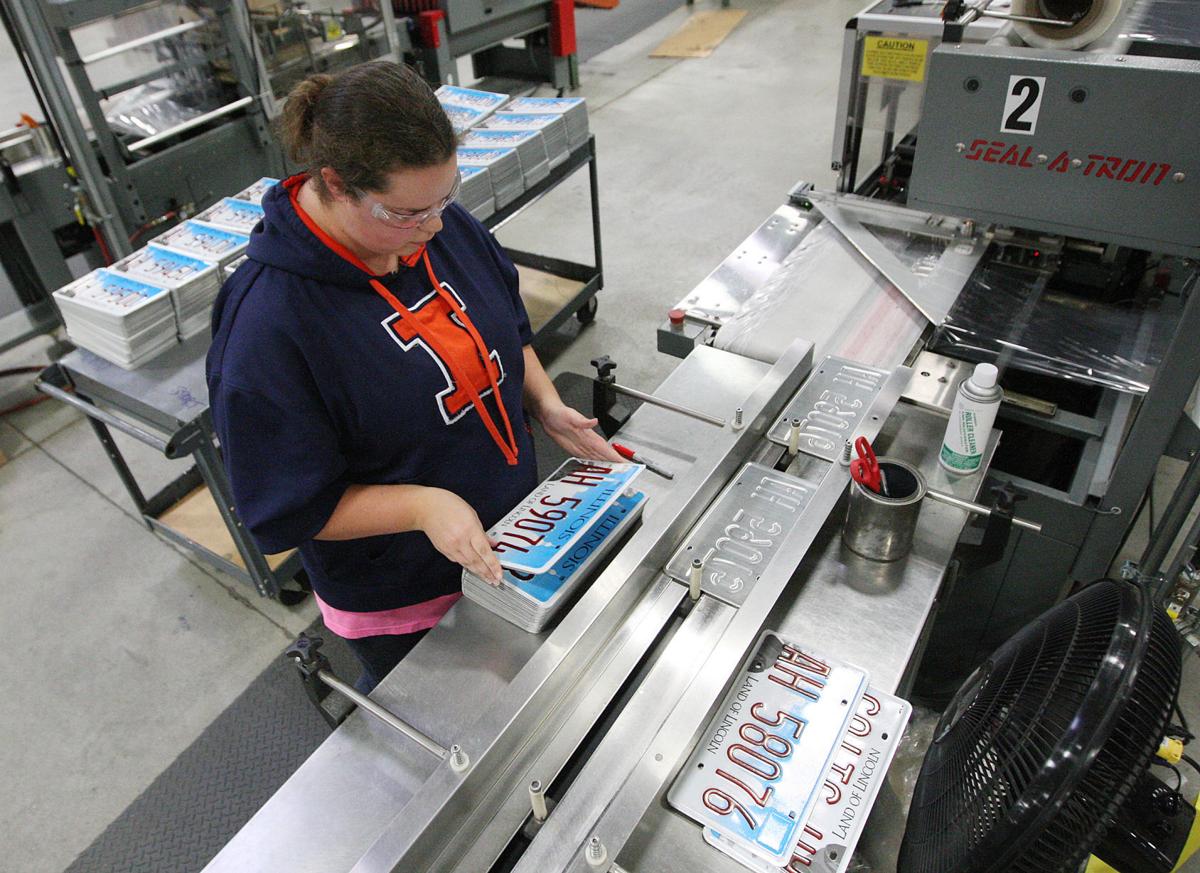 Christena Hall runs license plates through a machine to be plastic wrapped at mri.

DECATUR – Renitta Lippert was working part time as a certified nurse assistant, her husband was temporarily off work with a back injury, and they were expected to have three children in college this fall.

Luckily for the family, the 39-year-old Decatur woman is one of 12 new employees hired four months ago by mri, also known as Macon Resources Inc., to help manufacture the 1 million new license plates needed by the Illinois Secretary of State's Office next month as part of a replacement program starting next year.

The new jobs are but one way Decatur is benefiting from Secretary of State Jesse White's plan to replace the oldest license plates every year, starting next year with those originally issued in 2000 and 2001, until starting over in 2027 by replacing those issued in 2017.

“This is a great opportunity for us to continue the strong relationship we've had with that office since 1983,” said Dreux Lewandowski, executive director of mri. “It's good for us, good for Decatur and good for Illinois.”

Macon County Rehabilitation Facilities began producing all of the state's license plates in 1983, work that was continued by Macon Resources starting in 1988, the year it was created by a merger of the former agency and Progress Resources Center.

The exclusive arrangement continued until the last replating project in 2004, when the secretary of state gave 43 percent of the work to Waldale Mfg. in Nova Scotia.

Lewandowski said mri has a contract for 100 percent of the project this time around and began producing plates earlier this year according to a new design featuring images of Abraham Lincoln, the Chicago skyline, a farm and the State Capitol.

He said he's been discussing the forthcoming replating and new plate design with the state for about a year.

White announced the project at a Chicago news conference earlier this week, saying the plan allows license plates to be replaced gradually and within the agency's current budget.

“The program is mindful of Illinois' state budget challenges, while also seeking to remove the oldest plates from our roads,” White said.

Vehicle owners will receive mail notification if they qualify for new plates at no charge. Those with newer plates that are difficult to read may also apply at www.cyberdriveillinois.com.

Motorists who don't qualify but still want new plates can pay $29 and request them starting in January.

In addition to hiring 12 new technicians to the 14 already working on the embossing line, Lewandowski said the crew has been working overtime to meet project deadlines, a situation he expects to continue through next June 30.

He also said many more of the 170 adults in developmental training with mri are getting chances to add the sleeves affixed to the back of the plates to hold the car's registration, learn some jobs skills and earn some money, too.

“All those paychecks are being spent here,” Lewandowski said. “This is good for the community in so many ways.”

DECATUR – Mary's Garden, with its colorful sunflowers, zinnias and petunias, is more than eye candy for motorists on Lake Shore Drive.

Macon Resources Inc. on a roll

DECATUR – More than 100 players spent Sunday enjoying the “super bowl of bowling” for a good cause at Decatur's Spare Time Lanes.

SPRINGFIELD — The Illinois Secretary of State’s office plans to continue mailing out license plate renewal notices in the new year, with or wi…

In this November 2016 photo, Ashley Younker moves license plates in place to be roller coated at MRI (Macon Resources Inc.) in Decatur. MRI has been manufacturing Illinois' license plates since 1983.

Christena Hall runs license plates through a machine to be plastic wrapped at mri.