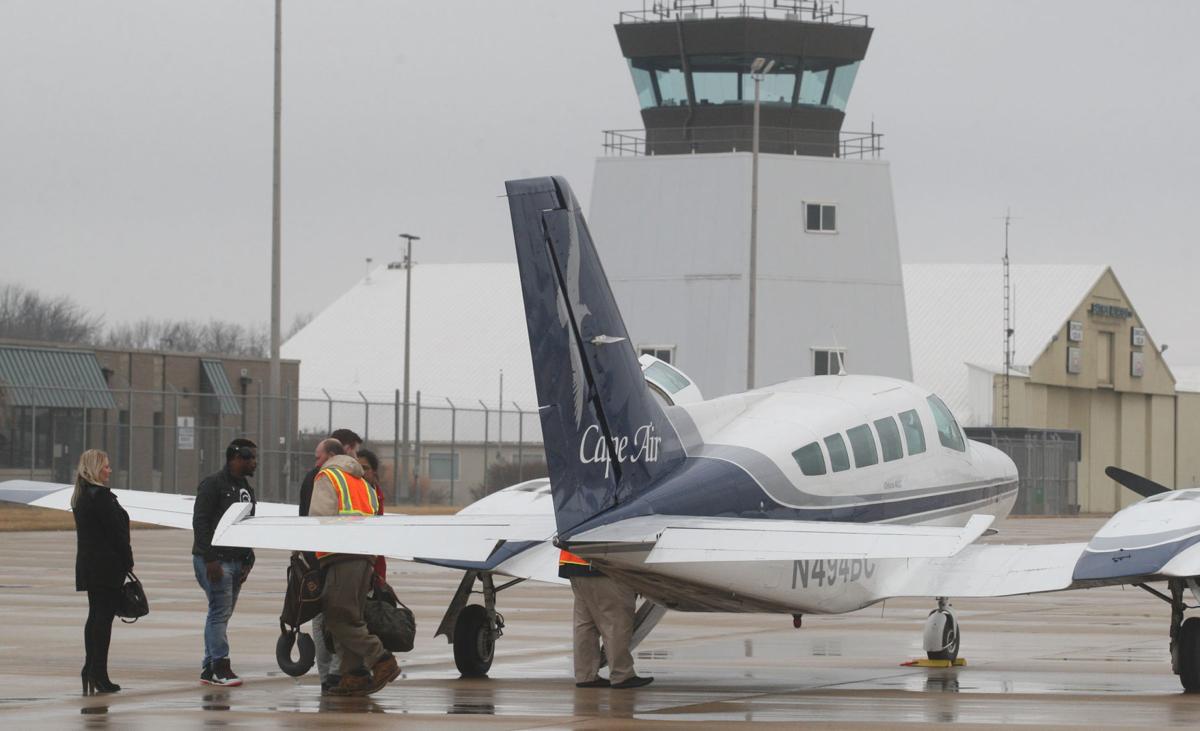 Passengers board a Cape Air plane for St. Louis at the Decatur Airport Wednesday afternoon. It was the first day of Cape Air flights at the airport. 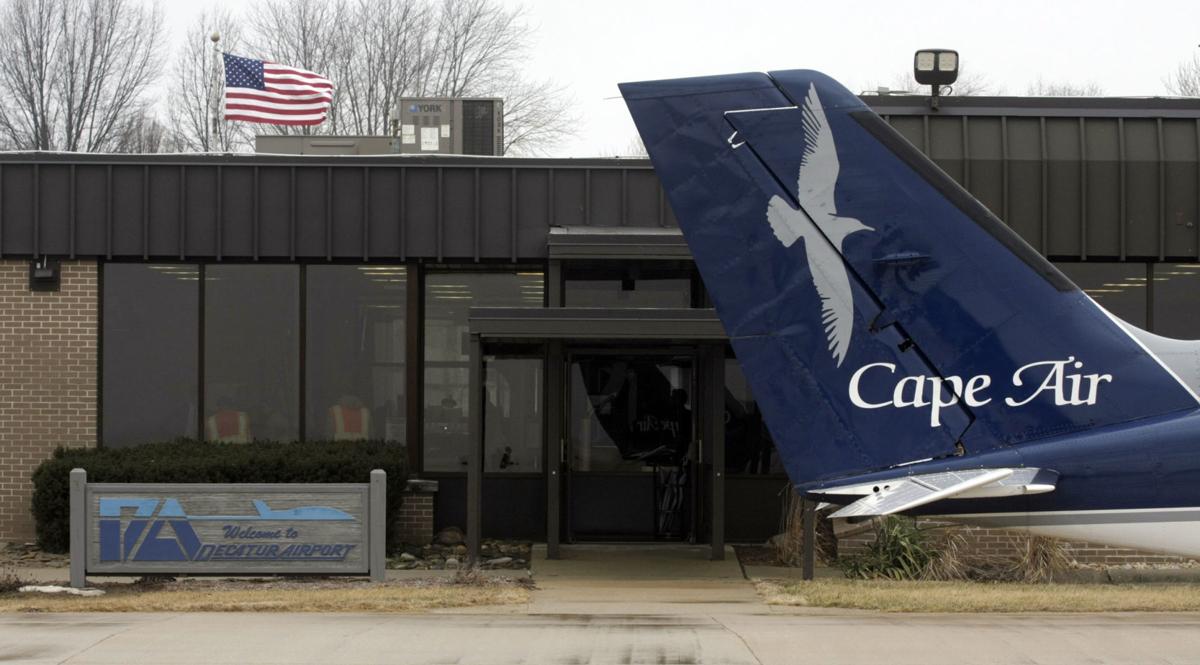 Aimee Coverstone, of Decatur, and her 6-year-old granddaughter, Kylie, were on the first flight. They had never flown out of Decatur Airport before Wednesday, and had not been following the Essential Air Service decision closely.

When the plane touched down, Aimee Coverstone said the experience was quick and easy, and she complimented the Cape Air staff.

“It was a much smaller aircraft than I thought, but the flight was fine,” Aimee Coverstone said.

With a thumbs up and a smile, Kylie Coverstone agreed.

The Department of Transportation chose Cape Air over SkyWest, the Utah-based airline preferred by the Decatur Park District and several key business leaders — especially Archer Daniels Midland Co. The department had said the jet service would cost $700,000 more to subsidize.

Air Choice One has been the airport's commercial air carrier since late 2009, but the park board did not support its bid to continue. The contract is for two years. SkyWest appealed the decision in January.

Also using the service Wednesday was Patrick Kagarama, although he wasn’t visiting Decatur Airport or flying its new air carrier under the happiest of circumstances.

Kagarama, on a brief stopover Wednesday on his way home to St. Louis, was returning from a long trip back to his native African nation of Rwanda to bury his late father. He’d flown Cape Air from Chicago to Decatur and was due to fly them again to the Gateway City.

“I’d not been on a small plane before; I was scared at first,” he said, glancing at the nine-seat twin prop Cessna 402 parked on the runway. “But I feel much better now. The flight wasn’t bad at all; I fell asleep.”

A love at first flight story is how Cape Air was billing itself as it began its operations on Valentine’s Day as the new Decatur air service provider.

The Massachusetts-based airline flies passengers around under the corporate acronym of “MOCHA HAGoTDI," which translates as “Make our Customers Happy and Have a Good Time Doing It.”

Founded in 1989, it took off fast and now operates a fleet of 83 Cessna 402s among several other aircraft and recently carried more than 686,000 passengers in a year.

It grew up offering service in exotic playgrounds of the rich like Cape Cod — where home prices can soar towards $50 million — and Martha’s Vineyard and the Caribbean.

Decatur might seem like an odd fit, but the company has long had a presence in the Midwest and serves many communities out of St. Louis. It’s also found a niche in competing for Essential Air Service contracts, which allow for air travel for cities that would struggle to attract a passenger service otherwise, like Decatur.

“We see these services as a lifeline for people,” said Trish Lorino, Cape Air’s vice president for marketing and public relations. “Not just connecting at airports, but getting to doctors and medical appointments and for their jobs and businesses.”

Decatur Airport Director Tim Wright hopes Cape Air will do much to lift his airport’s business prospects. He said Cape Air soars because it has “interline” agreements with big carriers like Delta, United, American and JetBlue, making connecting flights and luggage movements much more seamless.

“And with Cape Air, you can find their reservations system on Expedia, Travelocity, Orbitz and all those sites,” he said.

They were in Decatur hoping to ferment some business partnerships and were delighted to discover a new air service that would whisk them on to St. Louis, their next stop.

“Taking this Cape Air flight is very convenient,” said Noble. “I think we added two hours to the business part of the visit because we were able to save time by flying out of here.”

Lacerda said their firm is based in a small Ontario town and they understand the business value of air service access. “It’s a big attractor for business,” she added. “It’s essential.”

The most significant Herald & Review news events from 2018 ... So Far

DECATUR — Hoping to gain altitude quickly in Decatur, Cape Air began selling itself to community and business leaders on Thursday as it prepar…

I’m not the biggest fan of flying. While I fully understand how safe planes are, the concept of being thousands of feet of the ground has just…

DECATUR — Archer Daniels Midland Co. said there is nothing out of the ordinary about its involvement in lobbying for federally subsidized jet …

Today and Sunday are your final chances to weigh in on your Decatur-area favorites.

$8.5B expansion planned for Chicago O'Hare

CHICAGO — Chicago Mayor Rahm Emanuel and the city's airline carriers are in the final stages of negotiating an $8.5 billion deal to dramatical…

Editor's note: An earlier version of this story contained incorrect data about the number of passengers flying out of Decatur Airport during C…

DECATUR — Cape Air flew 688 passengers to St. Louis and Chicago during its first month as the commercial air carrier at Decatur Airport, the a…

COATES: What was incorrect in Decatur Airport story

We made a serious reporting error in our Sunday story on passenger numbers at Decatur Airport.

DECATUR — Cape Air officials said Monday that the airline on Wednesday will mark the opening of its new ticket office in downtown Decatur, 101…

Face your financial anxiety by reframing your relationship to money

Passengers board a Cape Air plane for St. Louis at the Decatur Airport Wednesday afternoon. It was the first day of Cape Air flights at the airport. 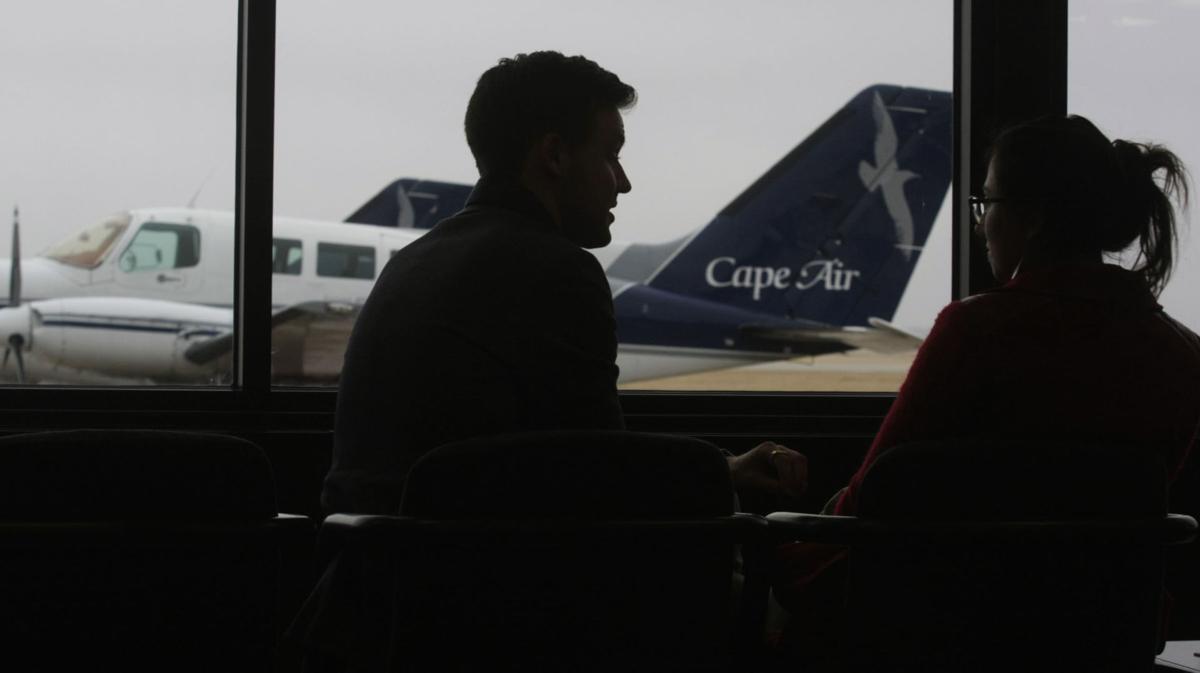 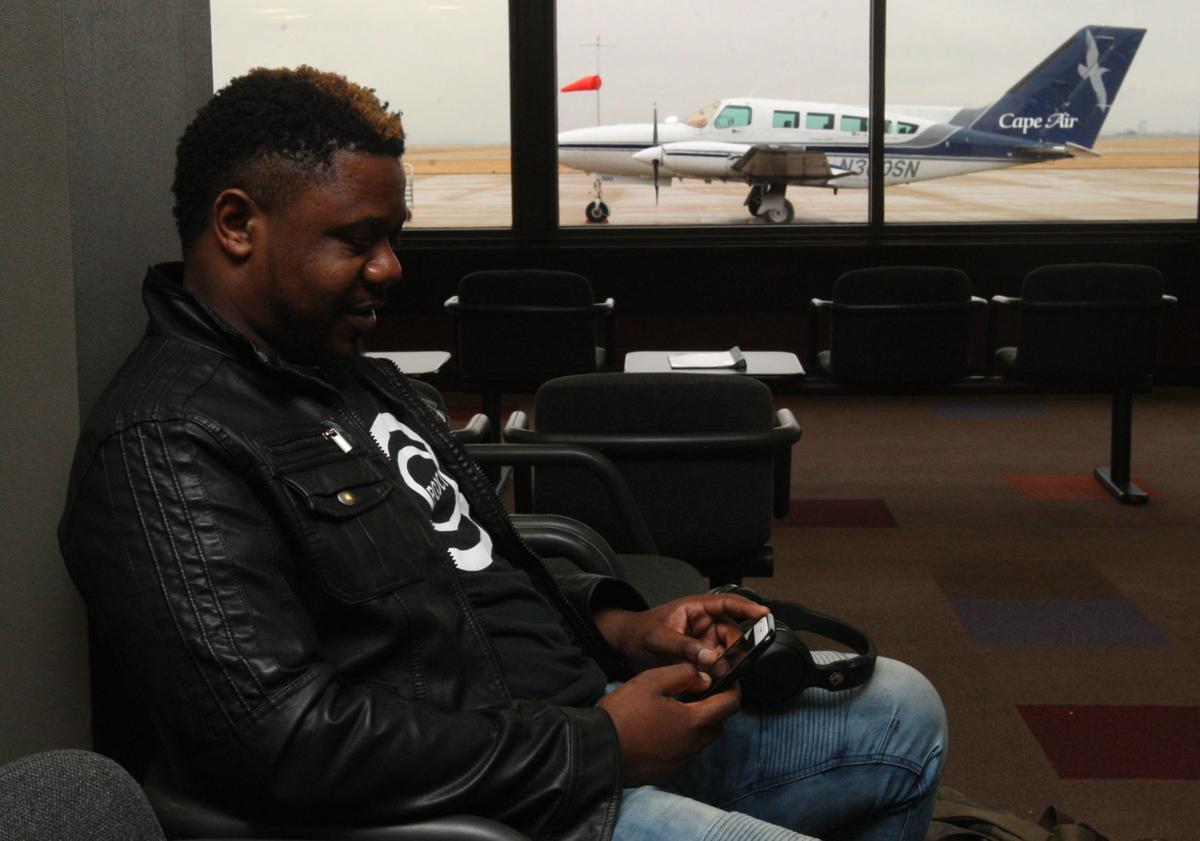 Patrick Kagarama waits to board a Cape Air flight to St. Louis at the Decatur Airport Wednesday afternoon.

Cape Air planes are prepped for their next flights at the Decatur Airport Wednesday afternoon.