Become a Member
Read Today's E-edition
Share This
Truck drivers are delivering the coronavirus vaccine, but they can't get a shot
0 Comments
Share this 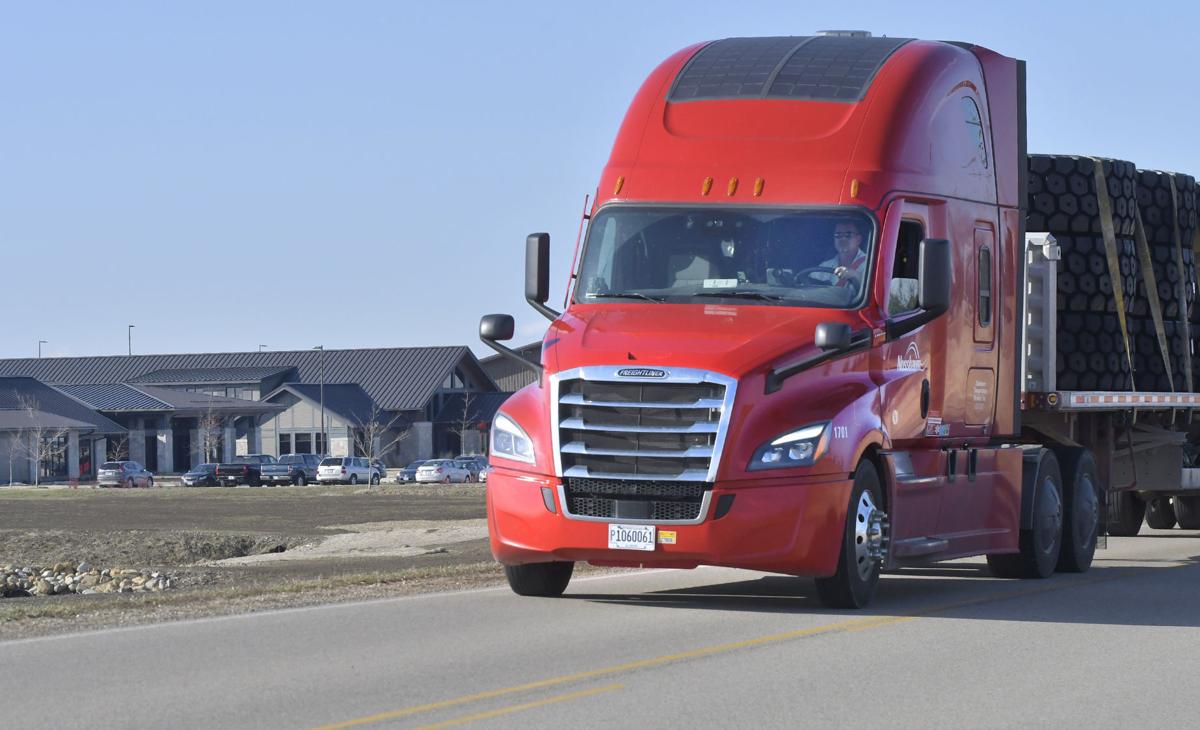 A semitrailer truck driven for Nussbaum Transportation passes by the company's headquarters in Hudson in March. 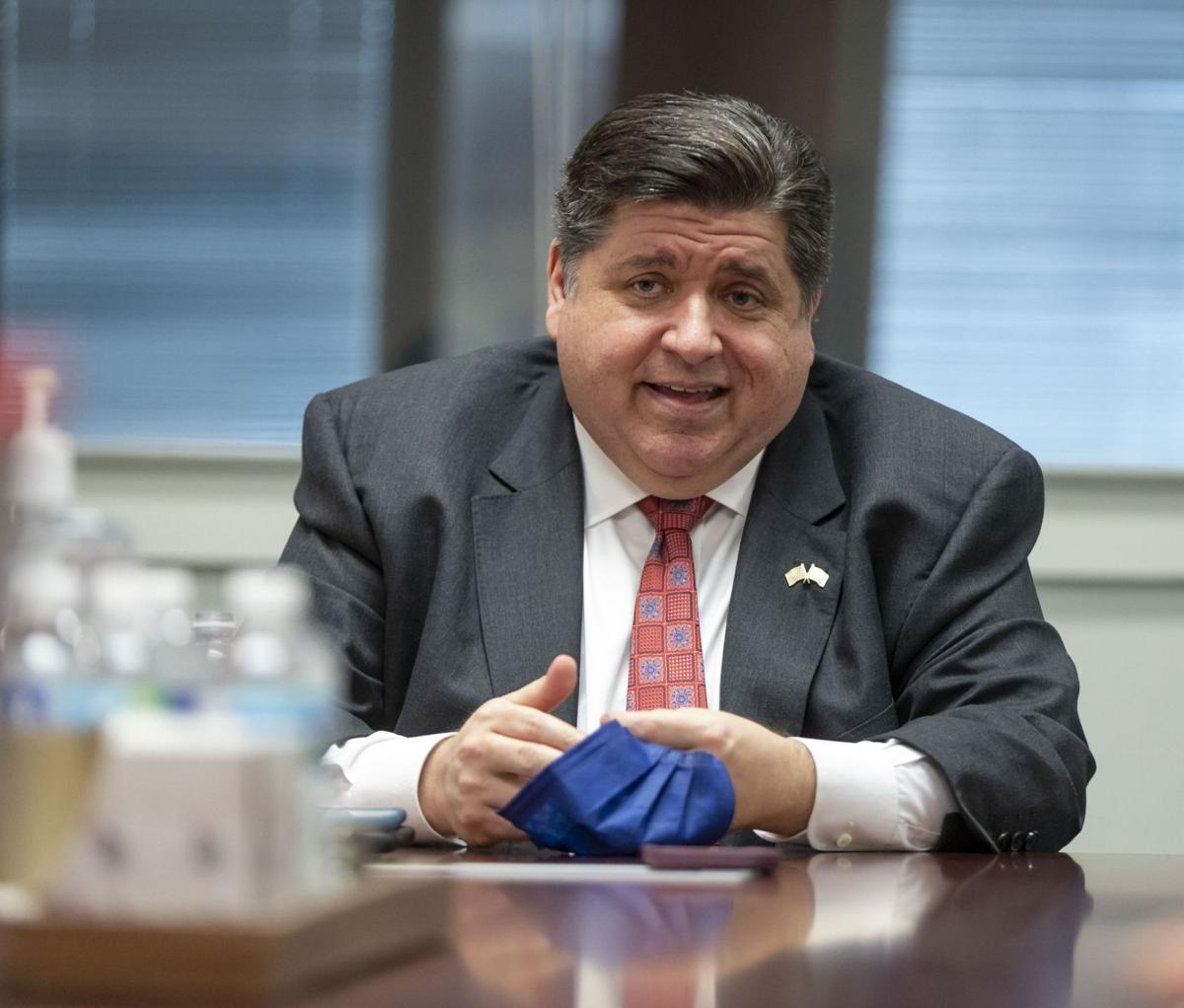 Gov. J.B. Pritzker talks about the first year of COVID-19 response in Illinois, March 15, in his office at the Thompson Center in Chicago. 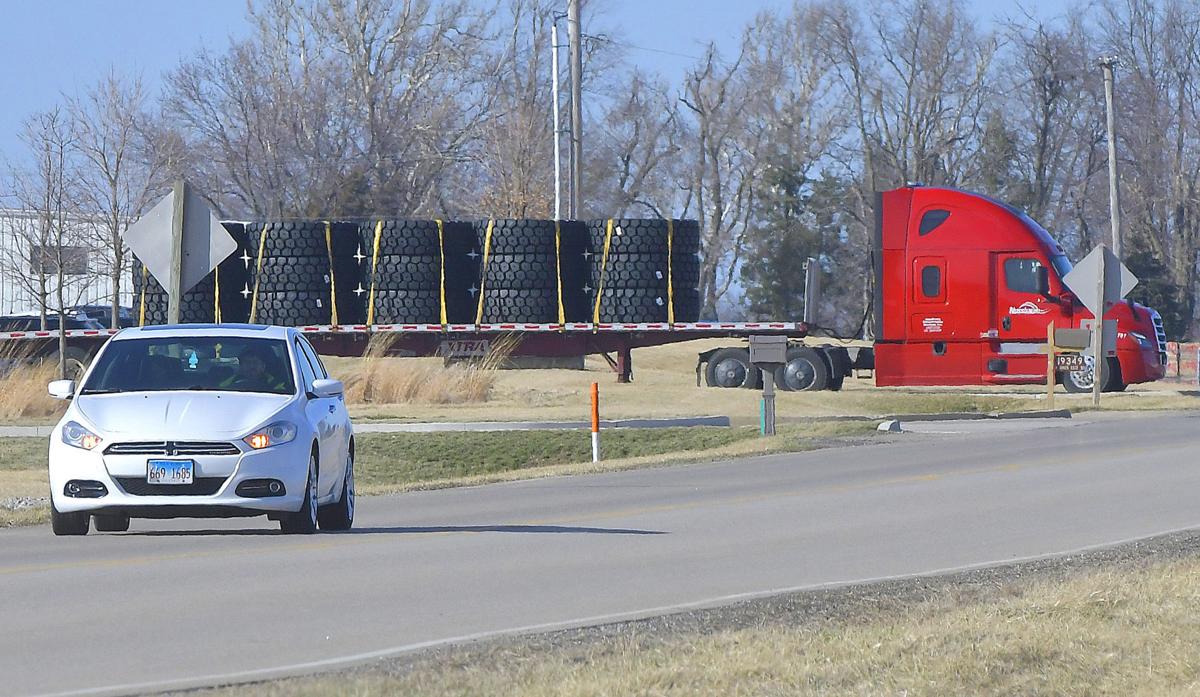 A semitrailer truck driven for Nussbaum Transportation pulls out of the company's headquarters in Hudson. 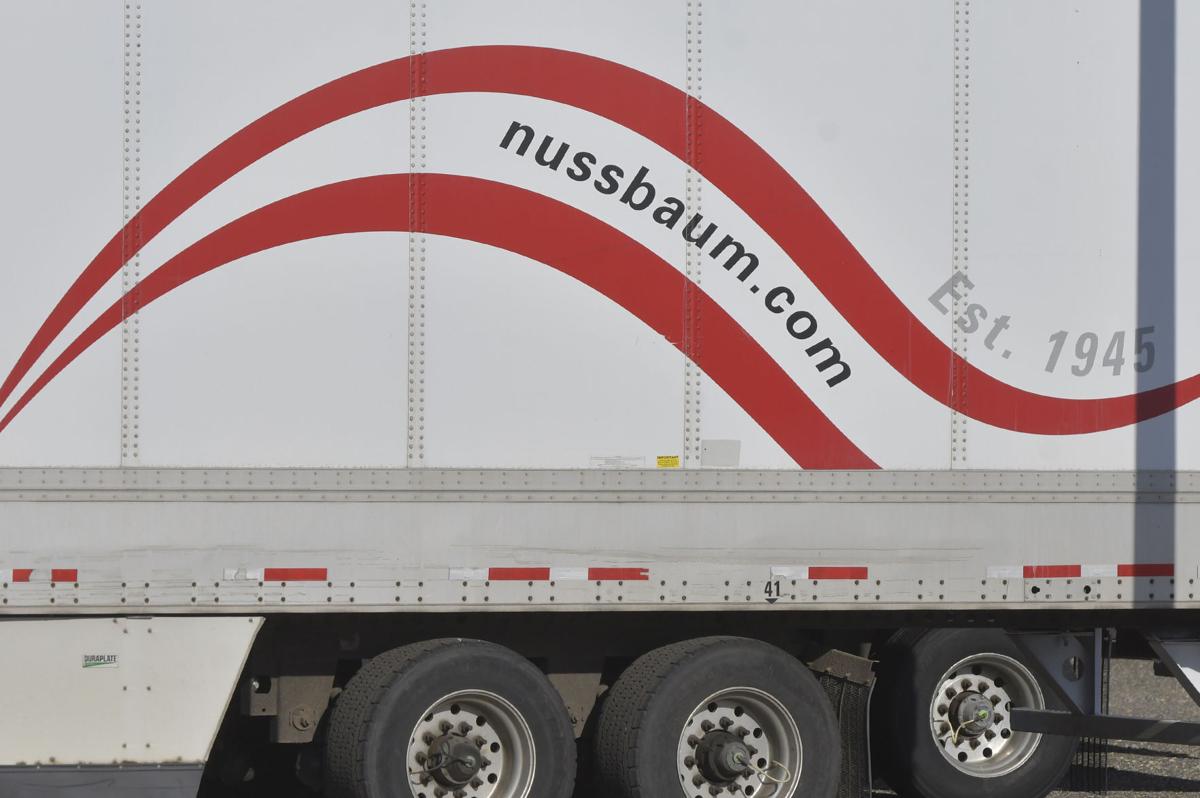 The big red swoosh, logo for Nussbaum Transportation, is known across the Midwest as the company delivers a variety of freight, Thursday, March 11, 2021.

SPRINGFIELD — Despite logging thousands of miles during the pandemic to transport food, household goods and medical supplies, like the COVID-19 vaccine, truck drivers in Illinois are among the throng of groups still waiting to get a shot.

"It seems kind of strange that the person delivering the vaccine and is so essential to its delivery isn’t part of the group that can get it," Illinois Trucking Association Executive Director Matt Hart said in an interview.

Under the Illinois Department of Public Health's coronavirus vaccination plan, transportation and logistics workers fall under Phase 1C, which covers "other essential workers who do not work remotely," like construction workers and bank tellers.

While that designation isn't final — Phase 1C is still a draft — industry associations like the ITA are calling on state officials to bump up some of their members to Phase 1B, which the state has been under since Jan. 25.

In a letter sent on Jan. 8 to Gov. J.B. Pritzker and members of his administration, the ITA asked state officials to revise Phase 1B to at least include truck drivers who are delivering the vaccine, and private package and delivery workers. 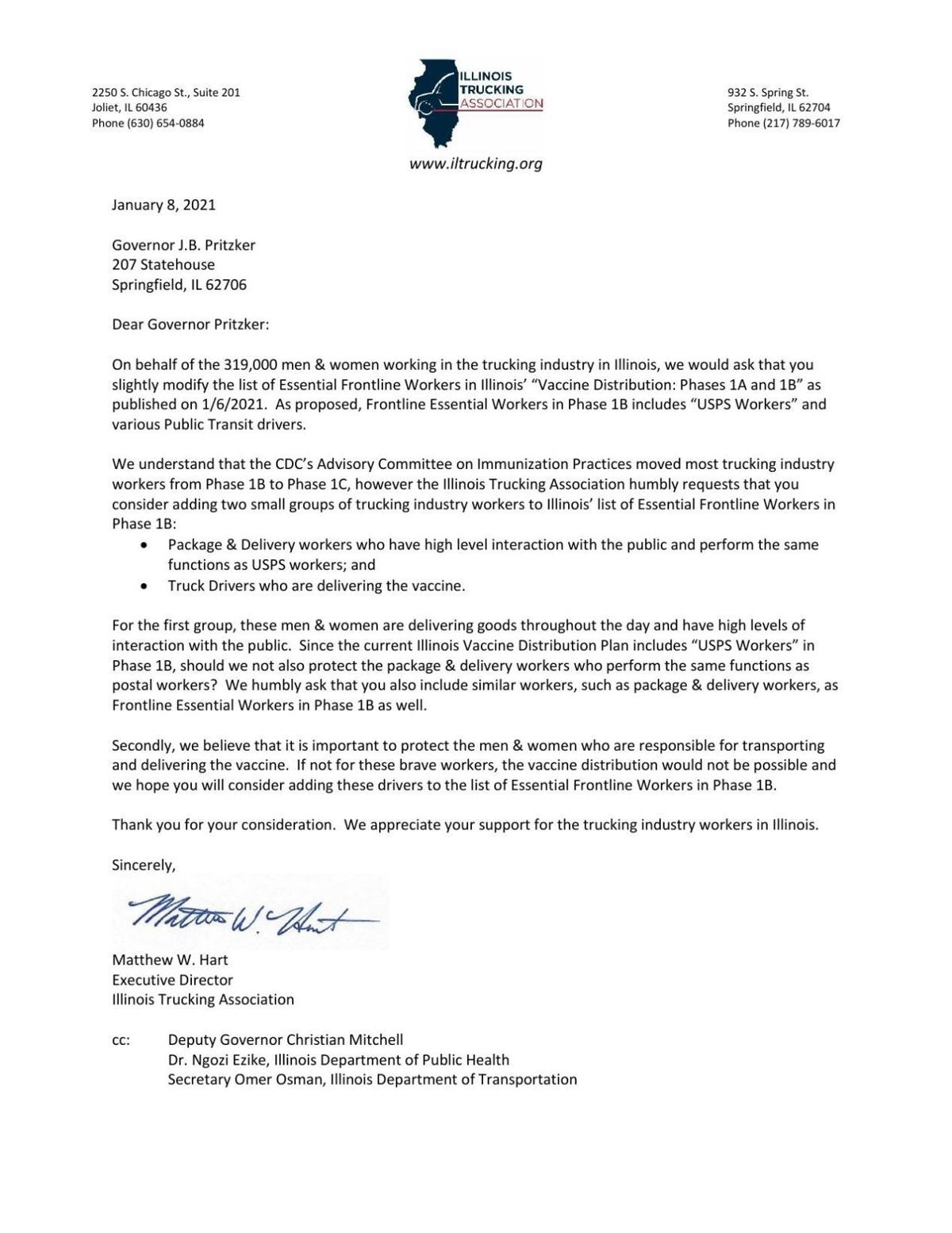 "Secondly, we believe that it is important to protect the men (and) women who are responsible for transporting and delivering the vaccine," the association wrote. "If not for these brave workers, the vaccine distribution would not be possible."

Hart acknowledged it's a sensitive subject to make a case for who should get a vaccine and who shouldn't.

"Our request is just that it be fair," he said. "When postal workers were included in (Phase) 1B, we felt let's be fair, let's also include private companies who do the same work."

Pritzker's office has yet to respond to the ITA, Hart said.

In the meantime, some drivers, like those at Alton Delivery and Warehousing in Mattoon, are pursuing COVID-19 vaccinations on their own and have not asked the company for help making arrangements.

“They are on the road all the time," Bells said. "They can’t make an appointment a week or 10 days ahead of time and be sure they are going to be there."

There are 319,260 people working for 26,240 Illinois trucking and logistics companies. The case for vaccinating some of them first became compelling, Hart said, in the spring of 2020, when executive stay-at-home orders issued by Pritzker sent consumers into a buying frenzy.

As store shelves emptied, supply chains constricted, and drivers pushing to meet demand were often met with exhausted warehouses or manufacturing plants operating at lower capacity because of outbreaks.

"We really have just kept on going through it all," Bells said.

To keep up with the extraneous demand to keep products and goods moving, transport companies, including Alton, looked to put as many drivers as they could on the road.

But that solution largely became a problem in the early summer, when consumers started purchasing more goods for home improvement and boosted their online shopping.

"We’ve had a shortage for as long as I can remember," Hart said. "The flip wasn't that people left the industry — they were put to work and companies said they needed more (drivers)."

Most that needed extra funding, Hart said, applied for and received a loan through the federal personal Paycheck Protection Program.

Both situations were in play at Hudson-headquartered Nussbaum Transportation, which received a $7.238 million PPP loan in late April.

The dry freight carrier employs 430 drivers, but it needs more.

"We've been able to tread water with our roster count," Stickling said. "But it's been more difficult to acquire new drivers because (commercial driver's license) schools shut down. There's not a lot of new ones coming into the pool."

'They had to go out into the unknown'

While most agents of Illinois' economy in 2020 were able to work from home to avoid additional exposure to and transmission of the virus, truck drivers didn't have that option.

"They couldn't stay home; they had to go out into the unknown," Stickling said. "They were the ones venturing out from home. They didn't get that benefit of buttoning down."

But the businesses they did visit were taking precaution, which has altered some of their practices.

“I know a lot of shippers and receivers won’t allow drivers out of their trucks or inside the dock area while they’re waiting for their trucks to be unloaded," Hunter said. "But besides that, nothing really has changed how we go about delivery.”

In the spring of 2020, when less was known about the virus, anxiety spread across the industry over what would happen to supply chains if enough drivers got sick and couldn't work, Hart said.

The Trump administration donated 80,000 face coverings to the ITA for distribution to drivers, Hart said. That helped, but not wholly.

Underpinning the high risk of infection for truck drivers is the surface transmission of the virus from daily interactions at public places like fuel stations and rest stops.

According to ITA member surveys, in June 65% of Illinois trucking companies had yet to record an active COVID-19 case among their employees. Last month, that number was at 35%.

Stickling said Nussbaum didn't witness a serious outbreak of the virus among its drivers or other employees. But that didn't stop a disruption to some drivers' lives, he said.

"We had some stay out days, weeks, months at a time because they weren't sure if they got exposed," Stickling said. "Those who did test positive, and those who did not — they didn't want to bring it home to their family."

Another disruptive factor was the closing or limiting of resources that drivers depend on, Stickling said.

"Truck stops, restaurants, rest areas — a lot of those places did shut down," Stickling said. "That concern of, 'I hope I can park here; I hope I can park and shower and use a restroom.' Those can be everyday concerns, but it was compounded during the pandemic."

Ultimately, even if trucking employees have to wait for a vaccine, Hart and Stickling said they at least hope drivers are viewed by the public as essential.

"The way we buy stuff has fundamentally changed, and that has only upped the demand for trucking," Stickling said. "If you like anything about your new way of life — thank a trucker."

Rob Stroud and Garrett Karsten contributed to this story.

Watch now: Central Illinoisans reflect on a year of life amid COVID

A year ago, the Herald & Review began to chronicle the COVID-19 pandemic through the eyes of people in different jobs and stages of life. We've checked in with the same group periodically to follow their journeys. Here's how they're doing now.

A semitrailer truck driven for Nussbaum Transportation passes by the company's headquarters in Hudson in March.

Gov. J.B. Pritzker talks about the first year of COVID-19 response in Illinois, March 15, in his office at the Thompson Center in Chicago.

A semitrailer truck driven for Nussbaum Transportation pulls out of the company's headquarters in Hudson.

The big red swoosh, logo for Nussbaum Transportation, is known across the Midwest as the company delivers a variety of freight, Thursday, March 11, 2021.