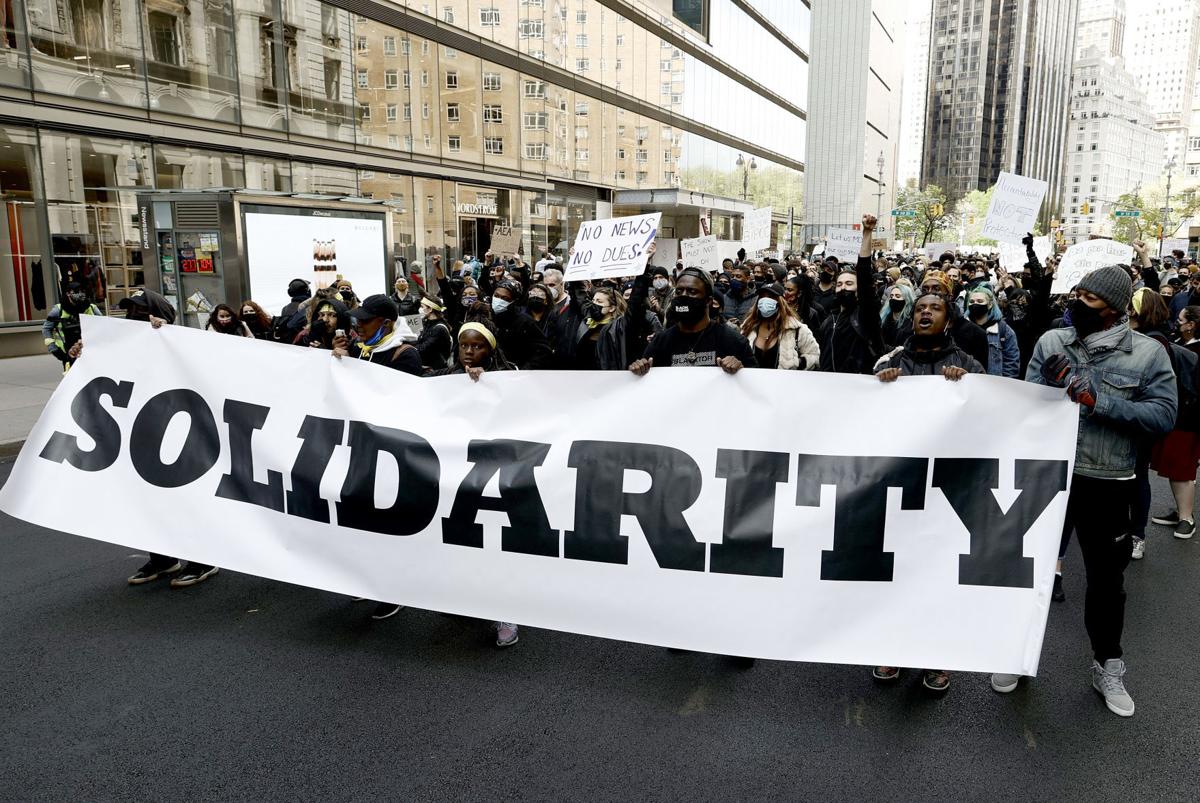 Protesters march down Broadway during a march against racism and inequality in the theater industry on April 22, 2021 in New York City. 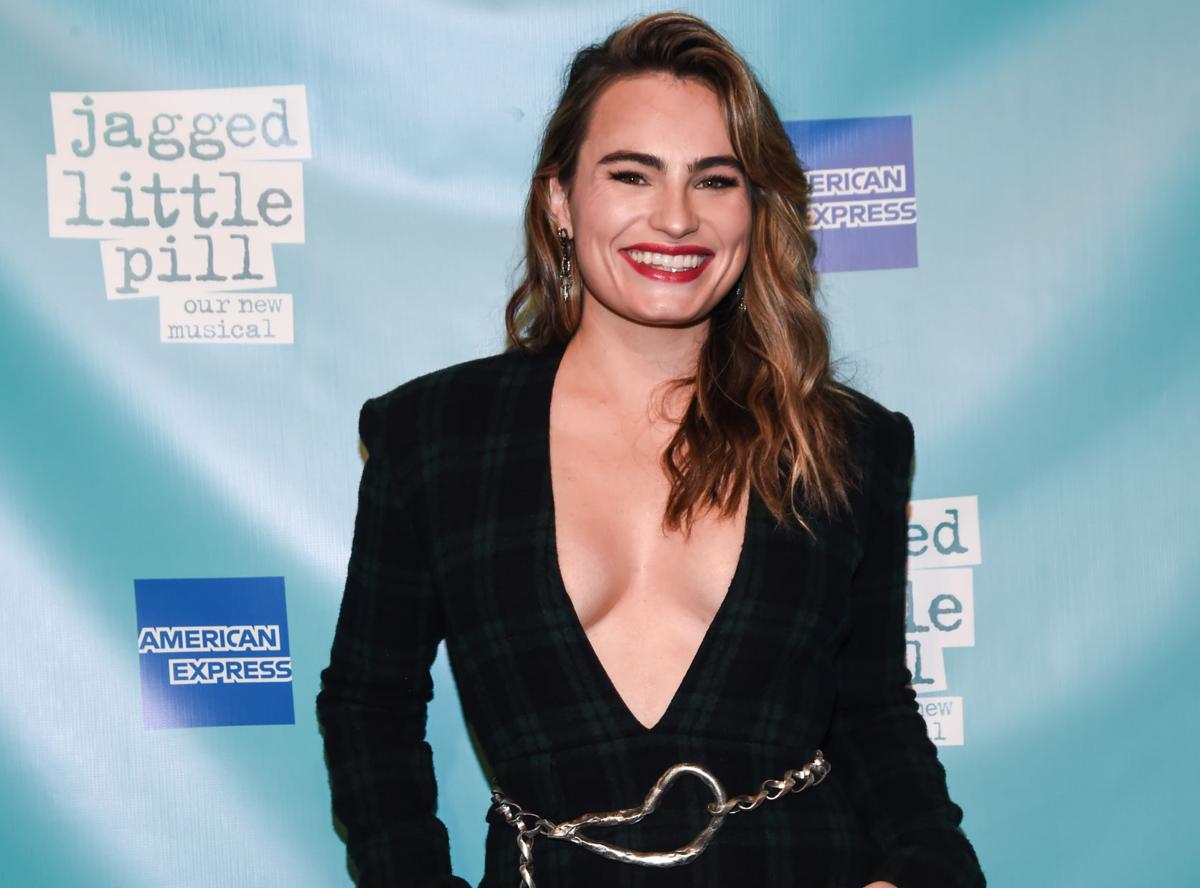 Kathryn Gallagher attends the after party for the opening night of the Broadway show "Jagged Little Pill" at Broadhurst Theatre on Dec. 5, 2019 in New York City.

Andre Jordan was 22 when he booked a touring production of “Legally Blonde.” The actor, then working multiple part-time jobs and not yet signed with an agent, knew this ensemble role would be a valuable step in his career.

There was one caveat, said the casting agent: “The creative team would like you to lose 15 to 20 pounds before you start rehearsals.”

Jordan didn’t wince at the request. During the audition, he and the others were asked to briefly remove their shirts, as a scene in the musical has them onstage without any. “I thought, ‘They’re saying that for my sake, they want me to be sexy and look my best,’” he recalled to the Los Angeles Times. “I’ll just do it.”

After two months of crash dieting and working out, Jordan arrived at the first rehearsal and saw that some of the other actors didn’t have the aforementioned physique. It turns out that Jordan was the only performer specifically asked to alter his body. Though the gig was “a great experience professionally, psychologically it tricked me into falling for a trap: thinking that I have to be thin to do this job.”

Jordan was among the many performers who posted on social media in response to a New York Times story — specifically, a sentence that, while factual, read as fatphobic. The sentence, which has since been reworded, drew attention as numerous Broadway productions are readying to resume performances after over a year of COVID-19 closures.

“As a performer who has struggled forever with eating disorders, things like this hit me in the deepest of my insecurities,” tweeted “Jagged Little Pill” star Kathryn Gallagher. “I hope audiences can understand if their favorite performers may have gone up a pant size.

“New costumes may need to be made or purchased to support these changing bodies that have kept us safe through a global pandemic. Hopefully we will learn we don’t need to uphold the body standards we’ve grown so accustomed to in this business for so long for the art to be impactful.”

As in numerous other sectors of entertainment, body diversity in theater has historically been the exception rather than the industry rule. “It’s not dissimilar to the systemic issues of why the default for characters are usually cis, white, straight and able-bodied, even though that’s not true of the real world,” said Jeffrey Lo, TheatreWorks Silicon Valley’s casting director who is also a playwright and director.

“But it echoes what we as a society have been programmed to think about what ‘beauty’ and ‘normal’ is,” he continued. “Since the writers of a piece do not include body specifications in their character descriptions as often as one might think, it’s up to directors and casting directors to dismantle those perceptions while finding the right performers for the story we’re telling.”

In particular, musical theater’s lack of body diversity “has been one of this industry’s third-rail issues for decades,” said Ryan Donovan, theater scholar and author of an upcoming book on the body politics of casting contemporary Broadway musicals.

“When it comes to iconic lead roles like Cinderella, Eliza Doolittle and Nellie Forbush, for example, they’re rarely ever played by anyone outside a particular body type. It becomes this self-reinforcing thing that says there’s only one way actors can look in order to be successful.”

The infamous ideology of a “Broadway body” — a term that assumes a stage performer’s castability is specifically related to their size — has come to reinforce “the imposed ideals we place on women to be waif-like, or men to be Adonis-figured,” tweeted “Kinky Boots” alum Sean Patrick Doyle.

The phrase has even been touted by theater-adjacent fitness companies as a marketing tool, despite the fact that “many of the performers I’ve seen with the best stamina are the larger individuals on Broadway,” tweeted performer Nora Schell. “I was the heaviest I’ve ever been when I was dancing on Broadway.”

To discourage the need to refit costumes in the middle of a run — performance contracts can include clauses requiring actors to maintain a certain weight, monitored via routine weigh-ins. “I get it — it’s like saying, ‘This is the body that I had when you booked me, so this is the body that I will keep the entire time I’m in the role,’” explained Jordan, whose “Legally Blonde” contract had this provision.

“But there’s no leeway for how stress or other factors can fluctuate body size, or how hard it is to stay healthy on the road when you’re only really stopping at gas stations, and still be able to show up and feel comfortable and confident about the work.”

Like the ongoing fight against the theater’s systemic racism and inequity, the industry’s longstanding sizeism won’t be solved overnight. (Especially as these issues are intersectional; for example, Jordan was also the only Black male actor on that “Legally Blonde” tour.)

But there’s hope: That casting director from 10 years ago has since reached out and apologized to Jordan, who holds no hard feelings.

“We have to give ourselves a little bit of grace to what we did before this — we were complicit because we were under this spell,” said Jordan, who makes his Broadway debut in the musical “Diana” later this year. “Yes, there are people in this industry who are stuck in the spell, maybe because they’ve benefited from it or they’re scared to let go. It’s OK, some people just need a little more time than others.

“But I know that we can all do this together,” he continued. “We’re not holding on to how things went before, and we’re not holding a grudge against it either. We’re using them as examples to learn from and to not go back.”

Watch now: Decatur's Speakeasy Records exhibit is heads above others

Speakeasy Records and Oddities offers amateur artists the opportunity to have their work held above everybody's heads.

Decatur gallery pieced together the next exhibit

Watch now: Perfect weather for the return of Lollapalooza

Protesters march down Broadway during a march against racism and inequality in the theater industry on April 22, 2021 in New York City.

Kathryn Gallagher attends the after party for the opening night of the Broadway show "Jagged Little Pill" at Broadhurst Theatre on Dec. 5, 2019 in New York City.