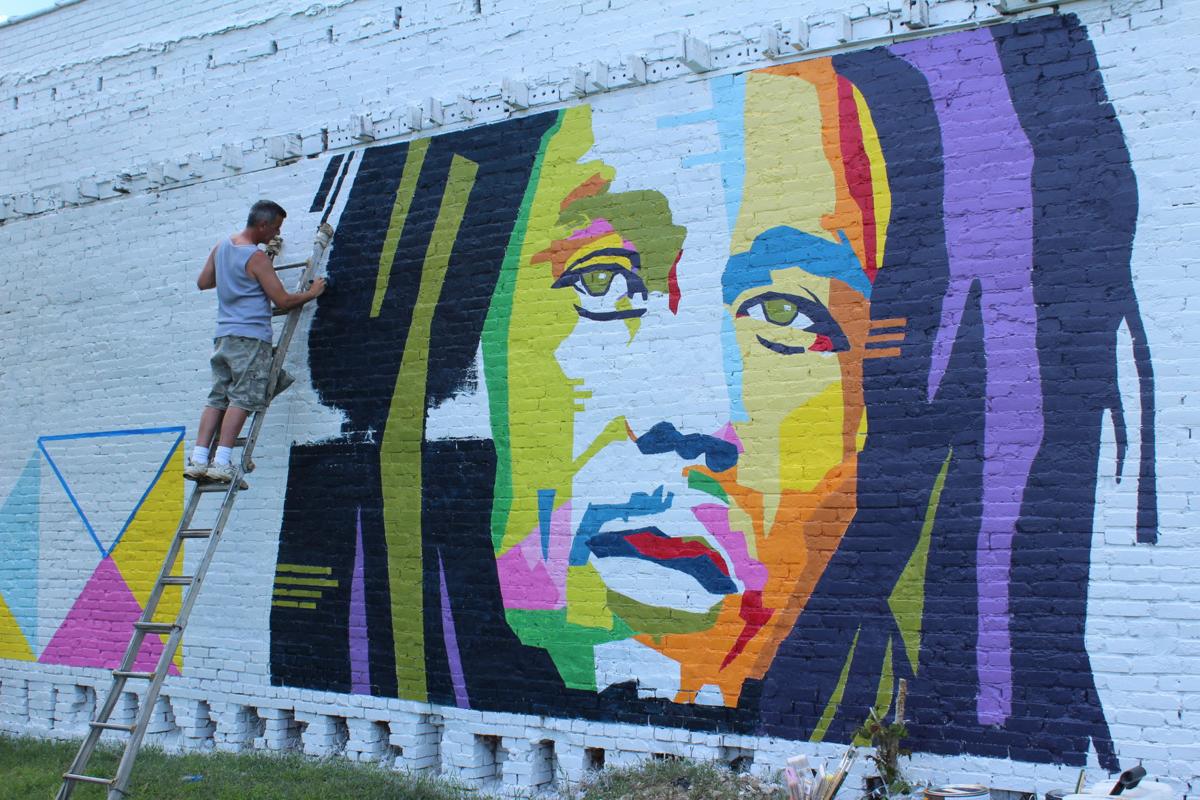 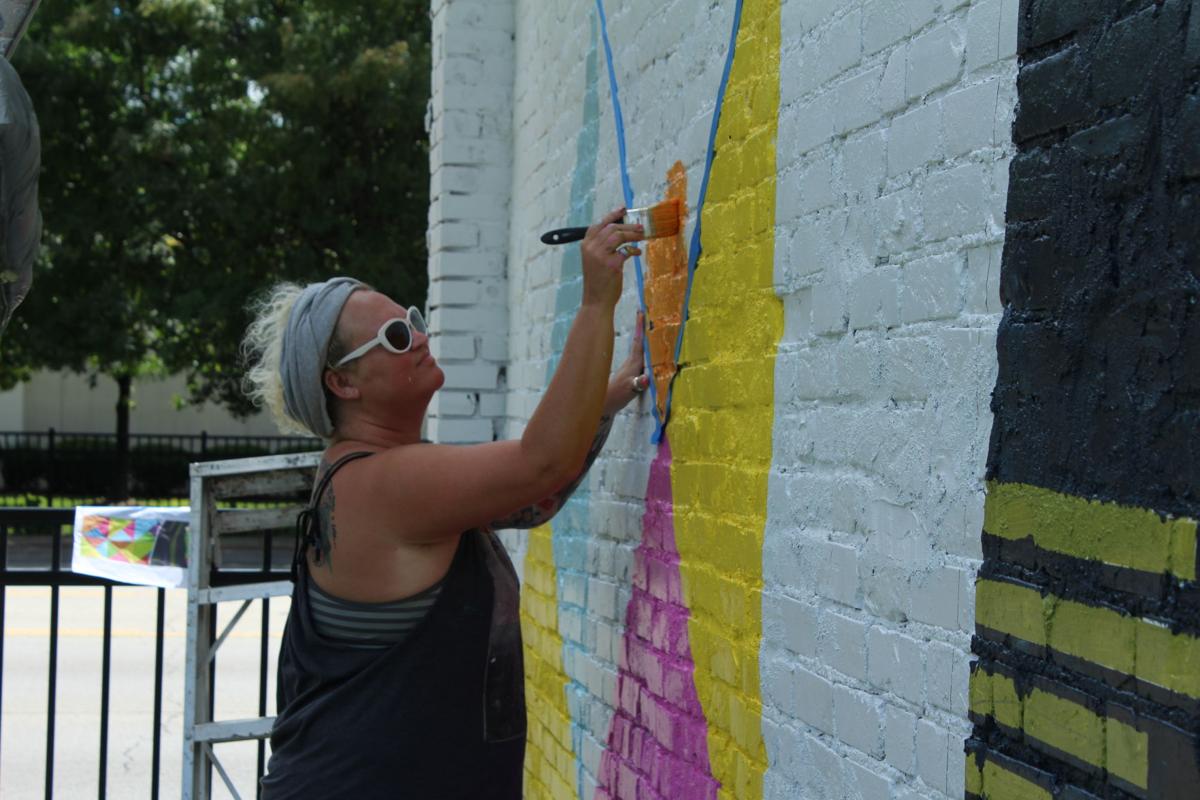 Shani Goss, who designed the mural, paints areas that are closer to the ground, because she doesn't like heights. 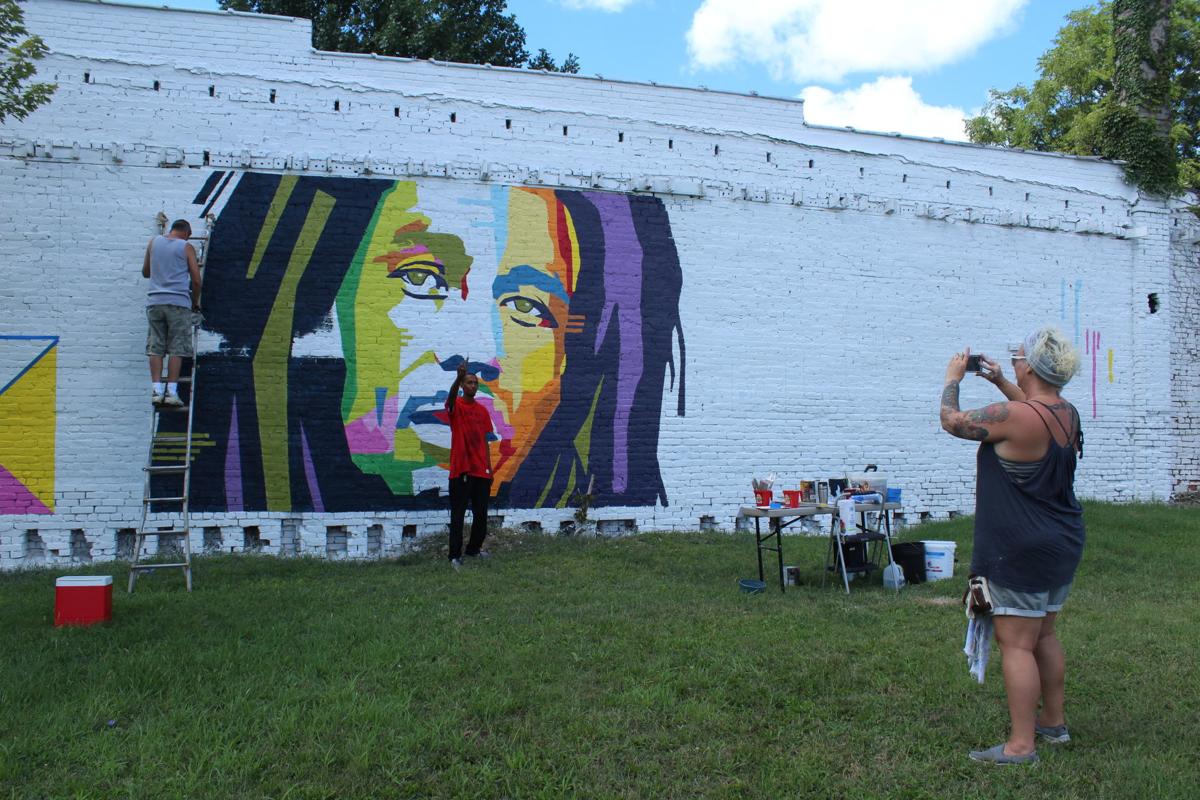 Jamahl Jones of Indianapolis asks artist Shani Goss to take his picture in front of the mural she designed, while Tronnie Goss continues painting. 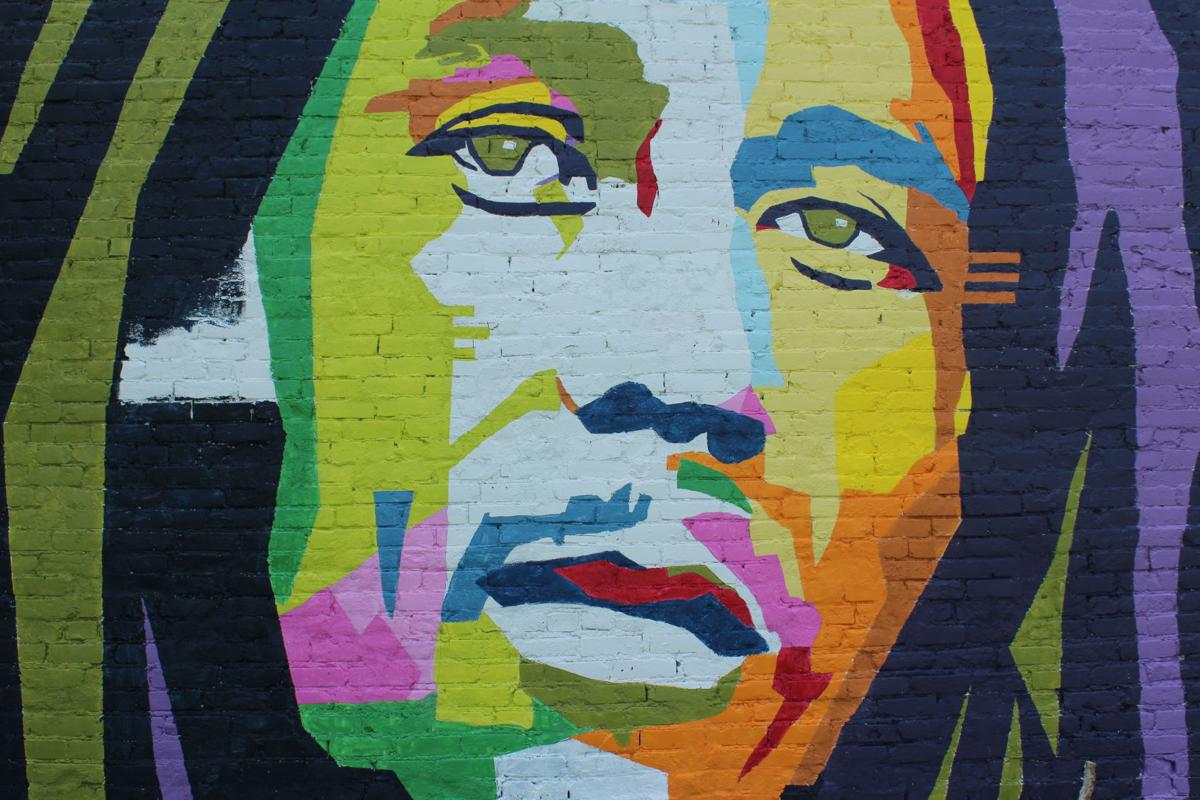 Though not yet complete, the mural was already making a bright impression on Eldorado Street travelers Sunday.

DECATUR – Over the course of the weekend, the latest addition to Decatur’s public art scene became increasingly hard to miss.

By Sunday, the unmistakable likeness of Bob Marley caught the attention of many drivers as it was being painted on the eastern-facing wall of G-B’s CDs DVDs Records at 702 E. Eldorado St.

Plenty of people honked, shouted encouragement or stopped to chat, said Shani Goss, who designed the mural and was painting it with the help of her husband, Tronnie. A family from Bloomington even dropped off some bottled water on Saturday.

As the artist was being interviewed by a reporter, her design lured in yet another admirer.

“I rolled past it two or three times, and it just captured me every single time,” said Jamahl Jones, 30, who finally parked his vehicle and got out to talk to the Gosses.

Jones said he lives in Indianapolis but visits Decatur for work. He asked Shani Goss to take his picture in front of the mural and promptly posted it on Facebook.

“I’m a Bob Marley fan, but I also love murals and artwork,” he said. “That’s one of the nicest things I’ve seen in awhile.”

The design features Marley’s face, resplendent in vivid oranges, yellows, greens, blues and pinks. When complete, he will be surrounded by a bright pattern of diamonds, along with the song title “One Love” and the lyrics, “Let’s get together and feel alright.”

By Sunday afternoon, the couple, who own Goss Advertising, had spent more than 20 hours on the mural. They started on Thursday night, when Jerry Johnson, executive director of the Decatur Area Arts Council, helped them trace the outline on the wall.

As they filled it in, Tronnie spent most of his time on a ladder because Shani isn’t keen on heights. She concentrated on the portions of work closer to the ground.

Shani said she chose Marley for his wide appeal and upbeat themes.

“I wanted to find something that conveyed a positive message, and that appealed to the most broad audience,” she said. “With all the stuff going on right now, something to make people happy.”

Gary and Bob Laskowski, who own the 29-year-old business, are certainly pleased. They said it’s great for Decatur’s morale, and Marley represents positive themes of peace and love.

“I hope they keep doing this on different buildings. It kind of makes you smile,” Gary Laskowski said.

“It cheers up the landscape,” his brother added.

That’s exactly the plan, Johnson said. The arts council’s Public Art Committee identifies sites for murals, then puts out a call for artists to submit designs. A few designs are chosen by the committee and brought to the building owner for consideration.

In this case, the arts council worked with both the Laskowskis and the building’s owner, Rachel LaGala, Johnson said. A sponsor provided funding for materials and a stipend for the artist, and Lowe’s donated paint.

This is the first of Decatur’s murals to be painted outside of downtown.

Johnson designed and painted the mural of Commodore Stephen Decatur at 145 S. Water St. in July 2013.

Last year, a group of private citizens commissioned the mural of former Mayor Mike McElroy that was painted during Decatur Celebration weekend at 240 N. Park St. It was designed by Goss, who painted it along with Johnson.

A few weeks later, Johnson and a group of volunteers painted the mural depicting the Decatur Staleys and birthplace of the Chicago Bears at 111 E. Main St.

Now, Johnson said he’s eager to expand the effort to other parts of the city. The next likely location is in the Oakwood area, where the mural of posters pasted to the wall in 2011 has begun to look worn.

“One of my goals here at the arts council is to grow the mural project outside of the downtown area, and this is Step 1,” Johnson said.

Britney Spears 'flattered' the world is so ‘concerned’ with her life

Britney Spears 'flattered' the world is so ‘concerned’ with her life

Who says an electrical box can’t be beautiful?

DECATUR -- When Bari Tarmon began creating unique photo-based images, he was advised to stick to one kind of picture.

DECATUR – The public art movement in Decatur continues with new sidewalk drawings that have popped up near Central Park.

The Decatur Area Arts Council is accepting proposals for three new murals planned for next year. The future murals will be located at:

DECATUR — In the age of digital music downloads and audio streams, a growing number of audiophiles have gone back to an old format to get thei…

Every day, tens of thousands of people driving through Decatur glance at the vanishing letters painted on the sides of brick buildings throughout the city.

But what do they see?

Shani Goss, who designed the mural, paints areas that are closer to the ground, because she doesn't like heights.

Jamahl Jones of Indianapolis asks artist Shani Goss to take his picture in front of the mural she designed, while Tronnie Goss continues painting.

Though not yet complete, the mural was already making a bright impression on Eldorado Street travelers Sunday.