DECATUR – Renowned Illinois artist Preston Jackson will return to his hometown of Decatur to feature a new exhibit, “A Show of Observation,” throughout April in the Madden Arts Center’s Anne Lloyd Gallery.

Jackson, a professor emeritus at the Art Institute of Chicago, plans to attend the gallery’s First Friday Gallery Walk from 5 to 7:30 p.m. Friday, April 6.

His last visit to the Madden Arts Center was when it opened. “My show was the first,” he said. “This is an anniversary.”

Jackson is a 1998 laureate of the Lincoln Academy of Illinois, the state's highest honor given to individuals. He lives in Peoria and is a founder of that city's Contemporary Art Center.

Sue Powell, gallery director for Decatur Area Arts Council, said she is honored to show Jackson’s work again. “He is a beloved Decatur native who has had a prestigious art career,” she said.

You've probably seen Jackson's work, even if you didn't realize it: He created the downtown sculpture of the African-American Civil War experience and the pastel painting in the lobby of the Decatur Public Library.

His work is also shown throughout the Midwest, including Chicago, St. Louis, Champaign. “And a lot of the river cities,” he said.

His shows often have large-scale, monumental pieces. Decatur’s exhibit will have smaller, but still striking, pieces. Many of his paintings’ subjects were models from Decatur. “These were people that I grew up with,” he said.

Jackson began creating art at 7 years old. At 75, he plans to continue painting and sculpting. The subject matter revolves around his past as well as life lessons.

Many of the exhibit paintings highlight Decatur’s jazz clubs from the 1940s and 1950s. The atmosphere and the music are heavy influences on his art. “The middle of the Harlem Renaissance period, we had such a thing that was happening here in Decatur down on Franklin Street,” Jackson said.

The theme of the local exhibit is to inform, enlighten and reveal the ideas of integration and race relationships.

“It was something that I wanted to do because of where we are today,” Jackson said. “It isn’t too far from where we were yesterday in race matters.”

Jackson’s art is focused on social commentary. The visual narratives emphasize details and personalities of our past. His images challenge viewers to contemplate who we are, where we came from and where we are headed.

“The work is about social awareness, and speaks of my respect for all living things and how closely we are all connected,” he said.

ANNE LLOYD GALLERY. The exhibit featuring the work of Preston Jackson “A Show of Observation” will be featured at the Anne Lloyd Gallery. Jackson’s work, of sculptures and paintings, focuses on social commentaries. A free reception during the First Friday Gallery Walk will be from 5 to 7:30 p.m. Friday, April 6, at the Madden Arts Center. Jackson will speak at 6 p.m. Live music will also be provided.

The Third Floor Gallery will feature Arts in Education, an exhibit of Macon County junior and senior high students, until April 19. A reception will be from 5 to 7 p.m. Friday, April 6. Pieces will be displayed at the Decatur Public Library and Richland Community College Erlanson Art Gallery.

ART FARM. The downtown art store will feature the work photographer of Laura Webb and her exhibit “The Face of the Story.” The black-and-white portrait series tell the story of an impactful or life-changing event in the subjects’ lives. The gallery will be open during First Friday Gallery Walk from 5 to 7:30 p.m. April 6.

BLUE CONNECTION. The Millikin University's student-run art gallery will feature the ceramic pieces of Millikin student Michael Holmberg. He will speak during the First Friday Gallery Walk at 6 p.m.

DECATUR AIRPORT GALLERY. The artwork of Beki Van Meter will be displayed at the Airport Gallery throughout April.

FLOURISHES GALLERY AND STUDIOS. The downtown Shelbyville gallery will feature the late Carol Thompson's collections of fabric postcards and photographs in Studio D.

In the gallery, the works of Kim Hanley will be featured including “16 on 16,” paintings inspired from Route 16.

The recent artwork of Carol Kessler will be in the main hall. The Beaux Arts Ballroom will have the artwork from Shelbyville elementary students. The exhibits will be displayed until May 26.

GALLERY 510. The paintings of Taylorville artist Jane Frey will be featured at the Gallery 510 throughout April. She will be featured during First Friday Gallery Walk, 5 to 7:30 p.m. Friday, April 6. An artist's talk will be at 6:30 p.m.

GIERTZ GALLERY. Beginning April 9, Parkland College Gallery will feature the Parkland College Art and Design Student Juried Exhibition. The exhibit will be displayed until May 5. A reception will be from 5 to 7 p.m. Thursday, April 12, with awards at 6 p.m.

KRANNERT ART MUSEUM. For one week only, the University of Illinois art museum will feature the 2018 School of Art and Design Master of Fine Arts Exhibition in the main level’s east gallery beginning April 21.

The gallery will also display in the main level’s Contemporary Gallery the exhibit “Allan Desouza: Through the Black Country.”

The exhibit “Basel Abbas and Ruanne Abou-Rahme: And Yet My Mask is Powerful” will be featured throughout the main level's west gallery. Both exhibits will be displayed until July 14.

LINCOLN ART INSTITUTE. The Logan County Arts members will feature their artwork inspired by “From the World of Books.” Subject matter ranges from Shakespeare to Martha Stewart. The artist show will be from 5 to 8 p.m. Thursday, April 12. Call (217) 651-8355 for an appointment.

Tracey Maras art exhibit will be featured in the south gallery of the nature center.

Both exhibits will be on display until the end of the April.

TARBLE ARTS CENTER. The Eastern Illinois University will feature the 36th Children’s Art Exhibition in the main gallery. The exhibit will be displayed until April 15.

Other exhibits include “On View: The Way We Were” in the Brainard Gallery until May 20.

UNIVERSITY GALLERIES. Beginning April 12, the Illinois State University art gallery will feature the 2018 Student Annual Exhibition. The exhibit will be displayed until May 13.

UPSTAIRS GALLERY. Artwork of Barbara Dove will be displayed again at the Decatur Public Library’s second floor gallery throughout April. The exhibit will be followed by pieces from the Art in Education Spring Show later in the month.

WILDFLOUR ARTISAN BAKERY AND CAFE. Barbara Dove’s artwork will be featured at the artisan cafe throughout the month.

DECATUR — As the old saying goes, “Eat, drink and be merry.”

DECATUR — Shavon Francis, an accountant at Archer Daniels Midland Co., says she is running for the Decatur City Council in next year's municip…

Chiara Ferragni to star in a new reality show

Phil Collins confirms next Genesis tour will be his last

Phil Collins confirms next Genesis tour will be his last 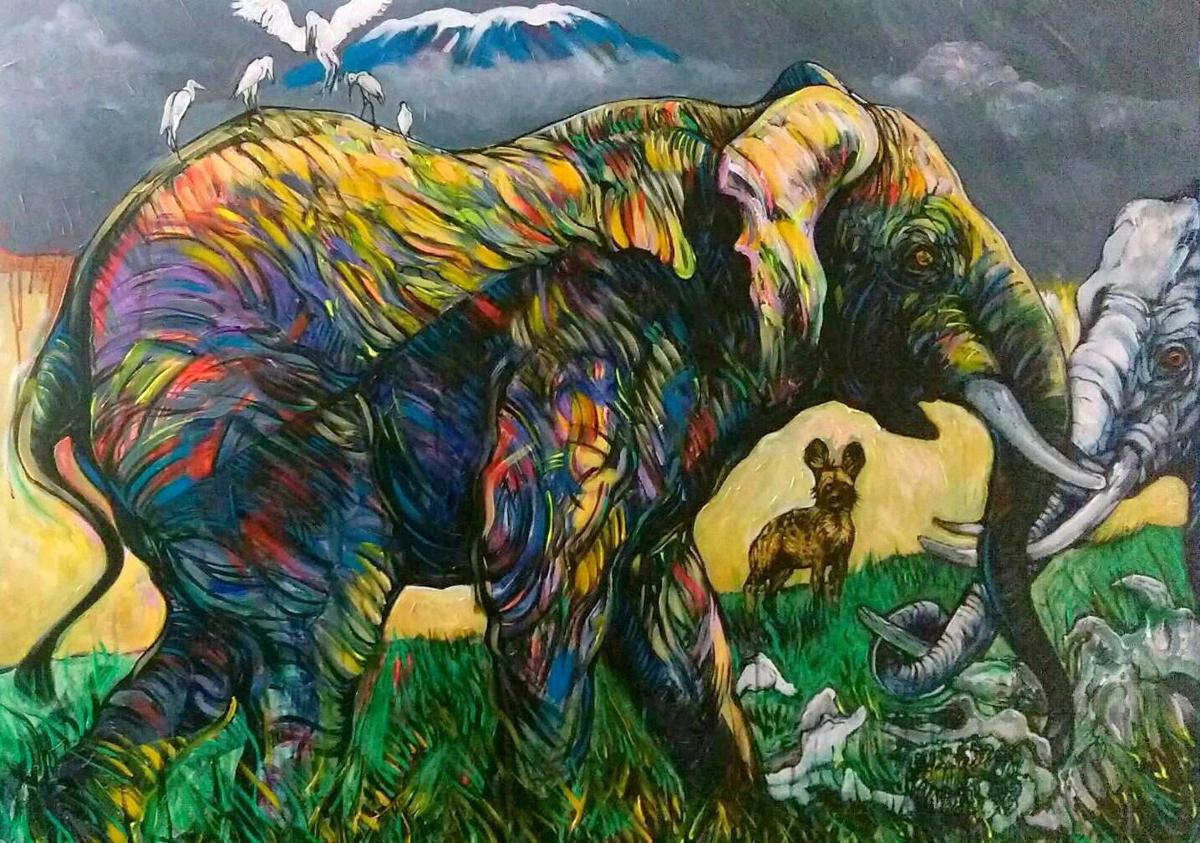 Preston Jackson's painting "Conversations at the Masquerade" will be featured at the Anne Lloyd Gallery during April. 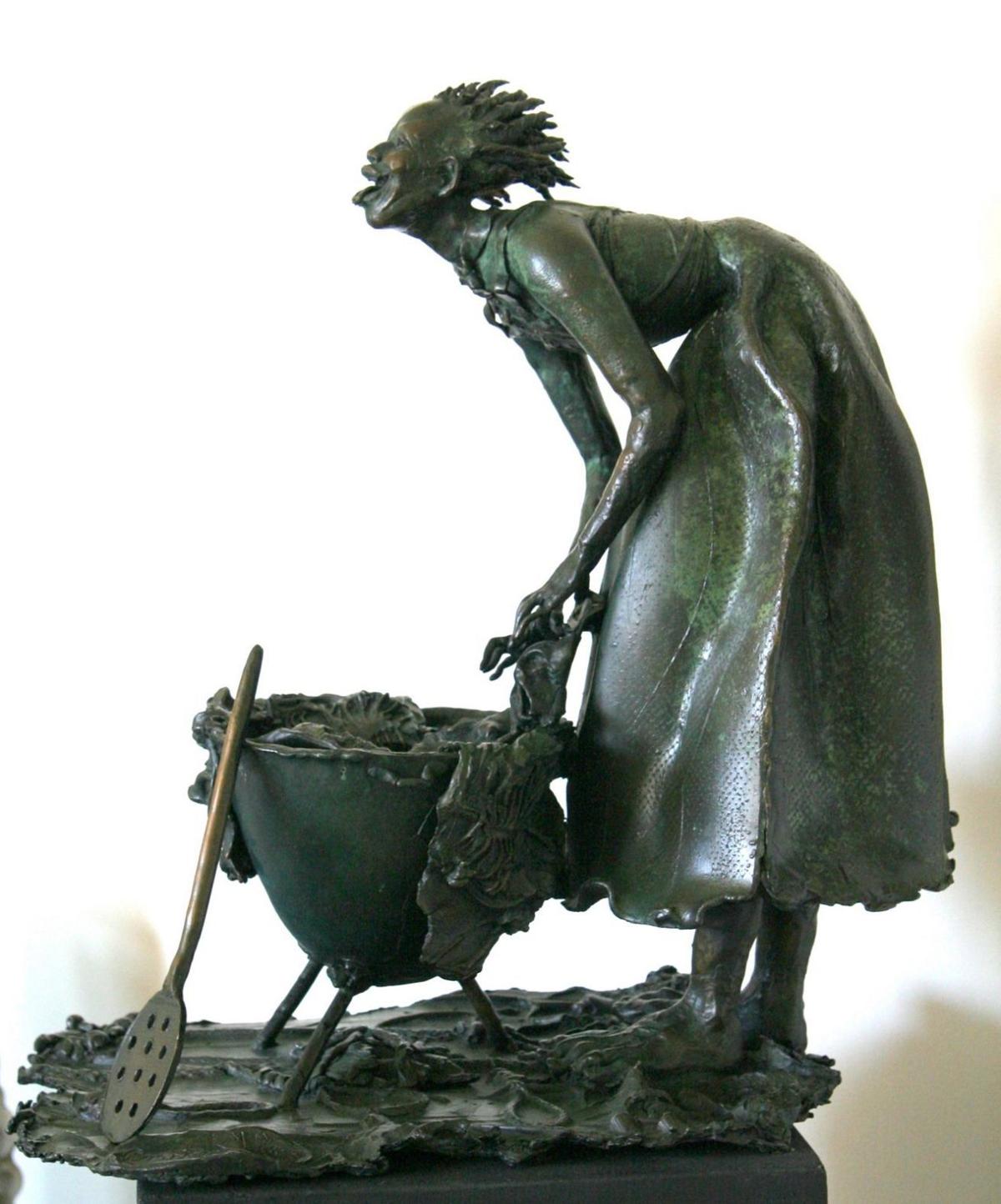 "Inside the Cauldron" will be on display during the April gallery exhibits. 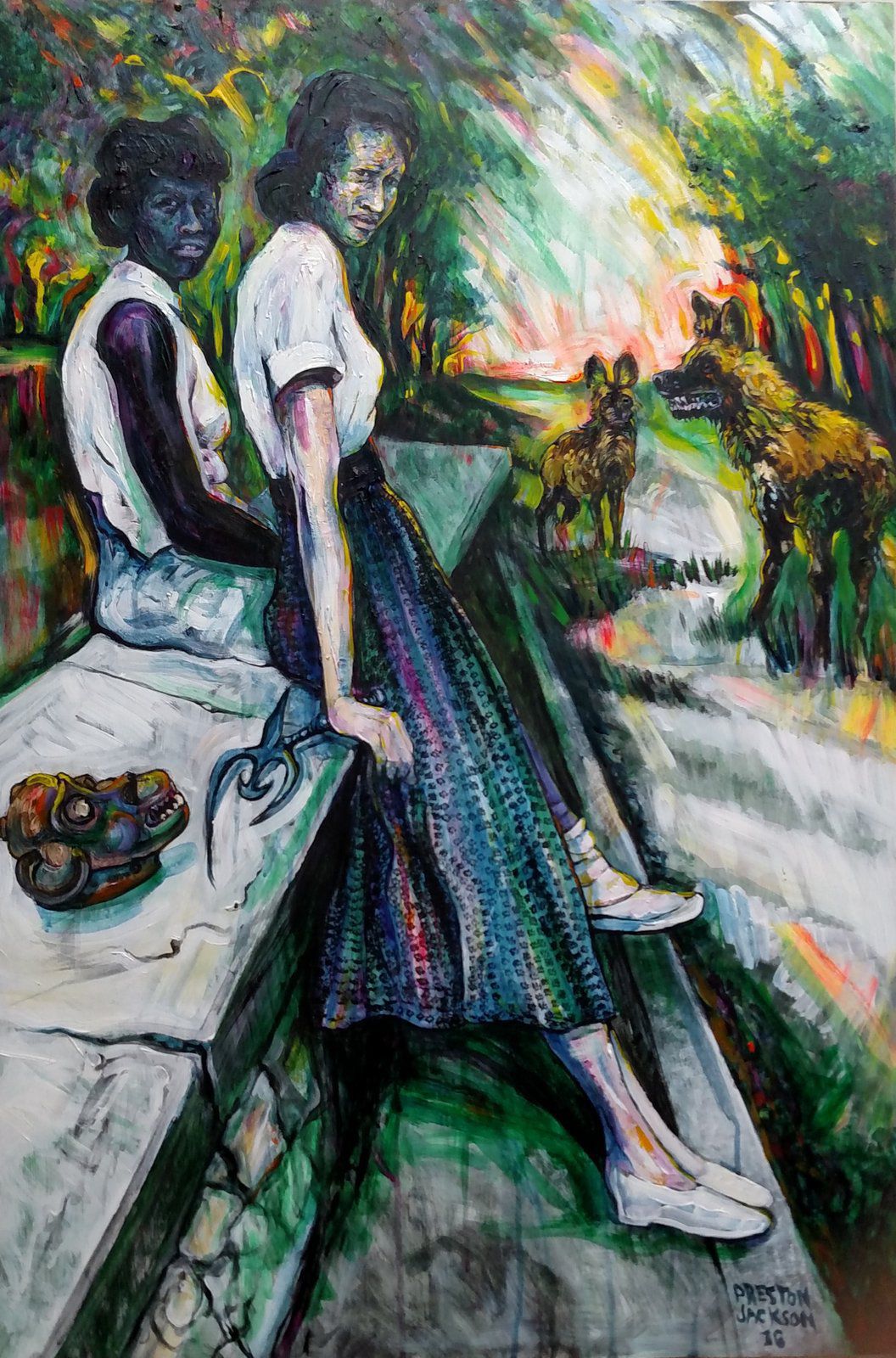 Preston's painting "Karen and Louise" were subjects he painted from his past. 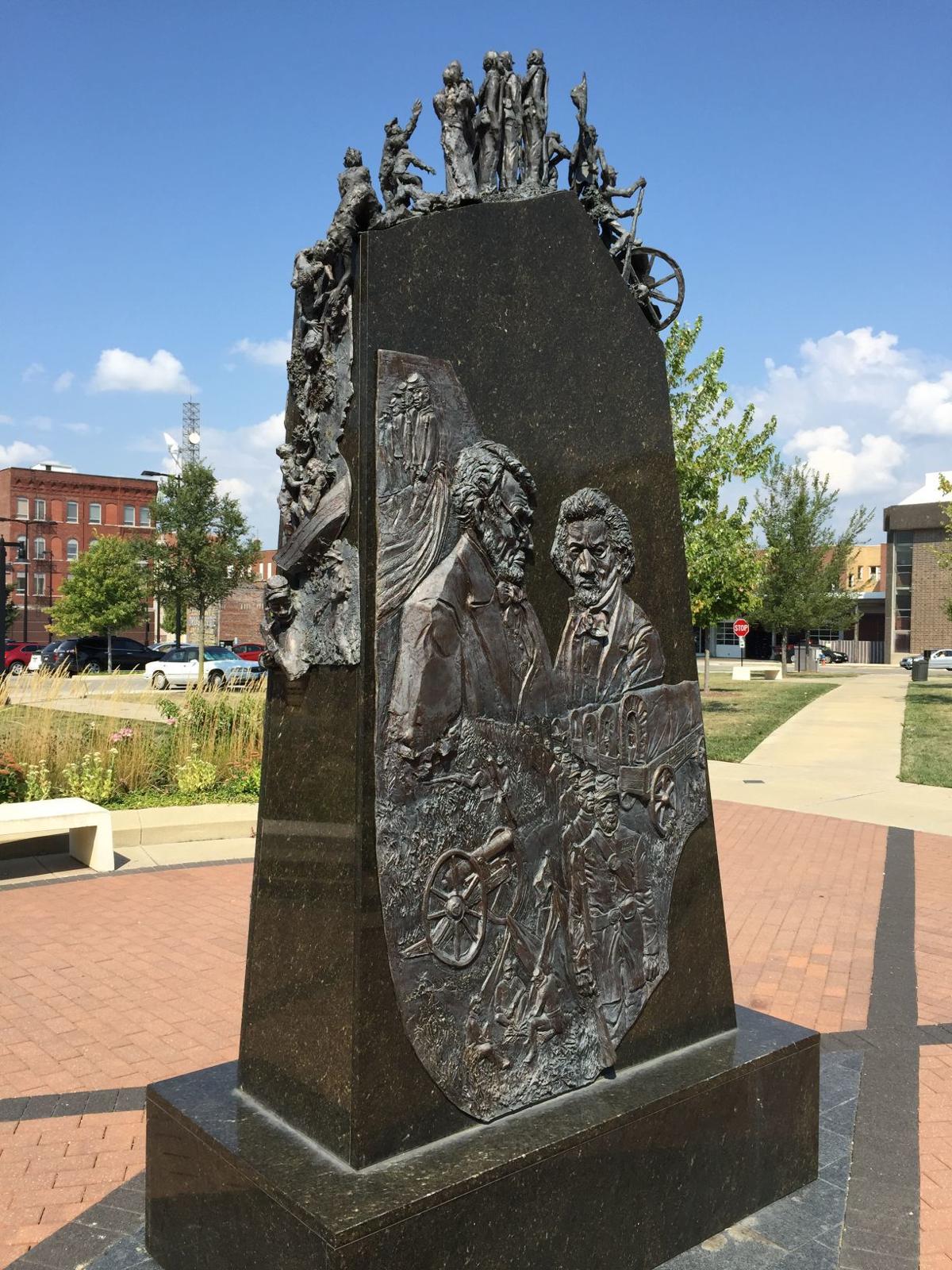 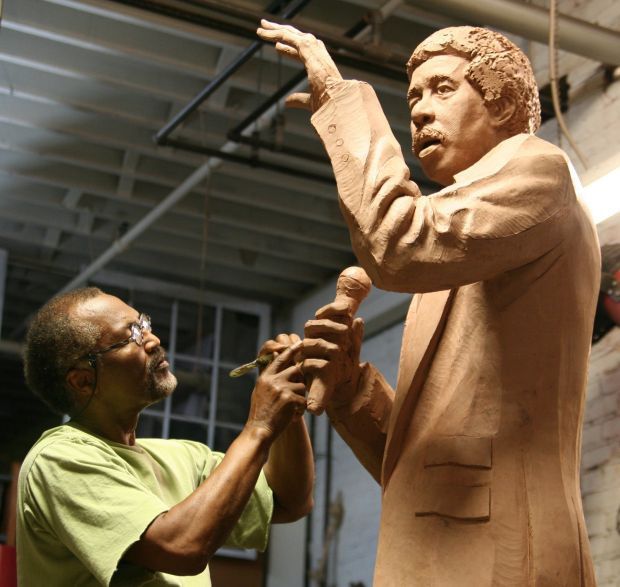 In this 2014 file photo, renowned artist Preston Jackson is shown at work on his 7½-foot clay carving of Richard Pryor. Jackson returns to his hometown of Decatur on Friday for a new exhibit.