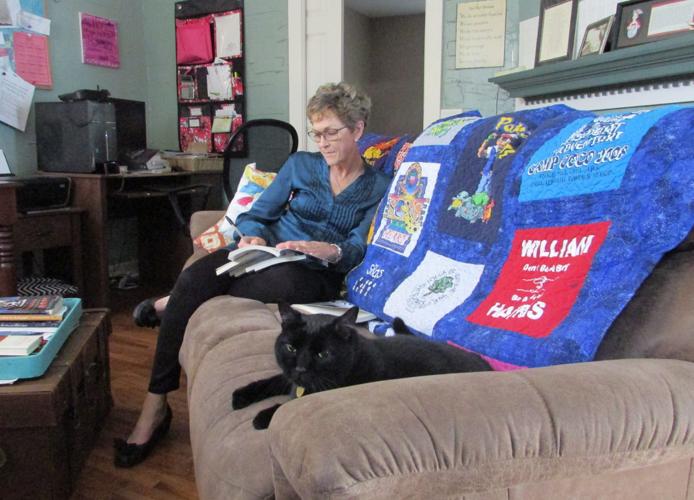 Gloria Martin with copies of her book in her living room, where Silas spent his final days. The quilt was a gift and is made from Silas' T-shirts. 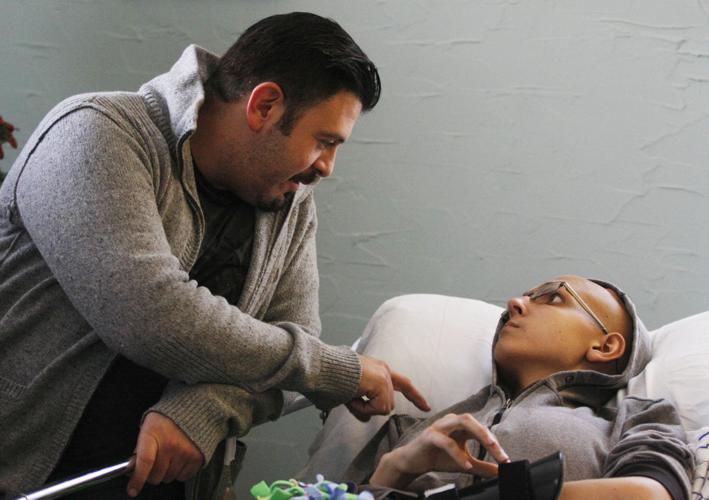 Adam Richman, host of the Man vs. Food television show, tells an anecdote while talking with Silas Martin during a visit at Martin’s home. 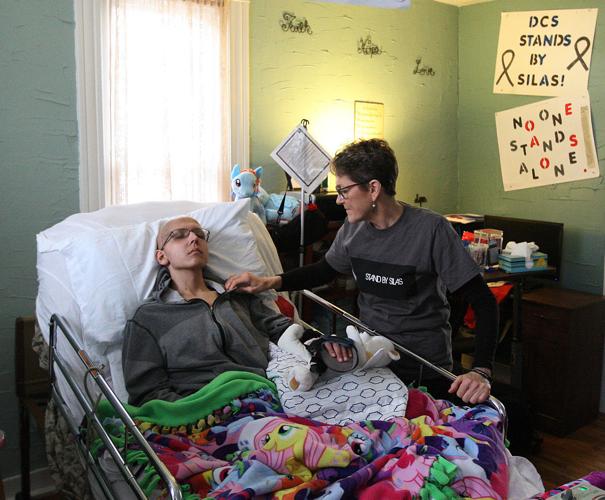 Martin comforts her son Silas as he takes a brief rest while visiting Adam Richman, host of the Man vs. Food television show, at Martin’s home. 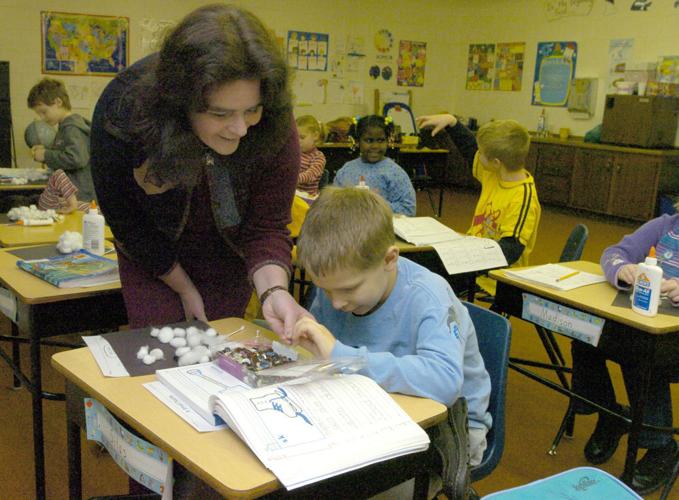 2004: Lynn Spicer, a teacher at the Northwest Christian Academy, works with Silas on a school project. Silas was six years old at the time. 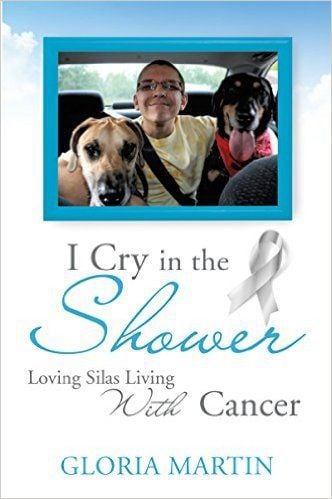 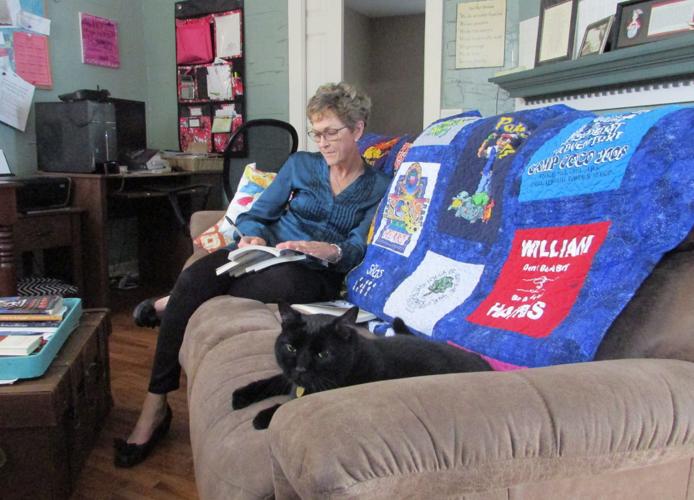 DECATUR – It's the story no parent wants to live through and the diagnosis no one wants to hear.

Your child has cancer.

Gloria Martin first faced this news when her son, Silas, was only 6. He began to show developmental delays at 6 months. He had a genetic disorder, Neurofibromatosis Type I, which his father, Brock, also has in a mild form. The disorder can also cause brain tumors and low vision, all of which Silas had. His circadian rhythms were disrupted and he woke in the middle of the night and fell asleep unexpectedly during the day. His appetite was voracious and insatiable. He had precocious puberty for which he had to receive regular shots. At 6, he was diagnosed with his first brain tumor.

The Martins said goodbye to Silas in December 2014, when he was 16, after he spent the majority of his earthly life fighting brain tumors, but doing it with steadfast faith and good humor.

“Last October, while Silas was in the hospital, I think Silas knew and I knew that his brain tumor was terminal,” Martin said. “We never talked about it and they kept giving hope. I knew I was going to write a book. I started writing daily devotionals after Silas died, but God put the urge in me to write this book, to tell the story of Silas' last 14 months. It was the story of his last brain tumor. It reads like a diary or a journal about the last 14 months of his life, but more so about our relationship.”

That book is “I Cry in the Shower: Loving Silas Living with Cancer” and is available on Amazon, Barnes & Noble and at Xulon Press' online store. Martin will also be at a book signing at Book World in Hickory Point Mall, 1 to 3 p.m. Saturday, Oct. 3.

“I only cried in front of Silas twice,” Martin said. “It upset him too much. That's why I cried in the shower.”

As his mother and primary caregiver, Martin said, she felt she had to be strong for him. She was the one who lived with him in St. Louis during the long weeks of daily treatments. She stayed by his side in the hospital. She drove him to doctors and tests and helped him with personal care when he was too weak or uncoordinated from treatments to do things for himself. It was especially difficult because Silas was “Mr. Independent,” as she called him. He bounced back quickly. He made his own decisions. He did things for himself.

In fact, he planned his own visitation and funeral. He was determined to leave his brain to cancer research. He made his own treatment decisions and always chose the most aggressive treatment, because he hoped doctors would learn from it and be able to help other kids with cancer.

The book also includes flashbacks, memories of earlier times in Silas' life, as he was a small child, moments when he was showing signs of what was ultimately to come but the family did not yet know those were symptoms of the brain tumors.

When he went home on hospice in late 2014, after the doctors had determined there was nothing more they could do, friends and family surrounded them and made memories in the time they had left.

His mother's adjustment since his passing hasn't been easy. “I have to figure out who I am without Silas,” she said. “My life was wrapped up in him for so long.”

Martin also plans to compile her daily Facebook devotionals into a book that she thinks might be out in the spring. Her faith has sustained her, as Silas' faith sustained him. He often said his God was “bigger than the odds,” quoting a favorite song by Matt Vollmar and the Great Romance, but his good humor came out in another favorite saying, “I'm just a bobber on the water; I go with the flow,” which is quoted on the back cover of Martin's book.

After his death, she has kept in touch with the other “cancer kids” and their families she and Silas met at St. Louis Children's Hospital. One of those children said that seeing that Martin is “OK” has relieved his fears of what would happen to his family when he's gone.

It's important to Martin to help other families and she's insistent that the only way to do that is to be transparent. She's a recovering alcoholic and she relapsed during Silas' illness, and she talks freely about that. She had been on medication for depression on and off for some time, and has been diagnosed with bipolar disorder. Now that she has that diagnosis, and medication for it, she said, she is feeling much better and has not had any desire for a drink.

The cover photo for the book was taken when her elder son, Shobi, was having his senior pictures taken. Martin and Silas, and the family dogs Bobby and Posh, tagged along and something made Martin ask if the photographer would take some family pictures, too. Posh was particularly attached to Silas, and she had bone cancer, and Martin said she thought this might be the last chance to get photos with her. Afterward, she realized that it might be the last family photos with Silas as well. The photographer climbed into the car and caught Silas and the two dogs sitting in the back seat, with Silas' trademark ear-to-ear grin in full bloom.

He once told her that he'd let her know if animals go to heaven once he got there himself. Martin said there was nothing in the Bible suggesting he'd be able to do that.

“What? You don't want me to levitate some books?” he said.

Almost a year after her youngest child's passing, Martin can draw on the strength and spirit he was known for.

“I hope that other people that are walking through the difficult days of caretaking, whether it's for a child or another family member, to read (this book) and find hope,” she said.

Our previous stories on Silas Martin

DECATUR – A line from “Star Wars” that makes fans smile is when Han Solo yells, “Never tell me the odds!” while under fire from Imperial force…

DECATUR – One of Silas Martin's favorite things to say was that he was healed, “this side or the other.”

DECATUR – Silas Martin has always been a big fan of food and a favorite pastime is watching The Food Network and other food-related shows.

During his decade-long battle with cancer, Silas Martin was adamant about one thing: doing whatever he could to further research into pediatric brain tumors, especially the rare kind that he had.

DECATUR — The expression goes "cancer touches everyone" and recently the students and faculty at Decatur Christian School have felt that strongly.

Gloria Martin with copies of her book in her living room, where Silas spent his final days. The quilt was a gift and is made from Silas' T-shirts.

Adam Richman, host of the Man vs. Food television show, tells an anecdote while talking with Silas Martin during a visit at Martin’s home.

Martin comforts her son Silas as he takes a brief rest while visiting Adam Richman, host of the Man vs. Food television show, at Martin’s home.

2004: Lynn Spicer, a teacher at the Northwest Christian Academy, works with Silas on a school project. Silas was six years old at the time.