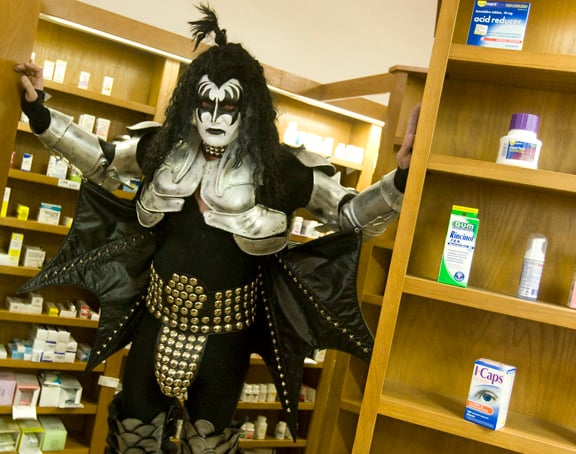 Herald & Review photos/Lisa Morrison Moweaqua pharmacist Terry Traster does not normally look like this when he comes back with your prescription. Traster as Gene Simmons from the band KISS was so intimidating in his costume all other contestants in a look-alike contest disappeared during a recent appearance. 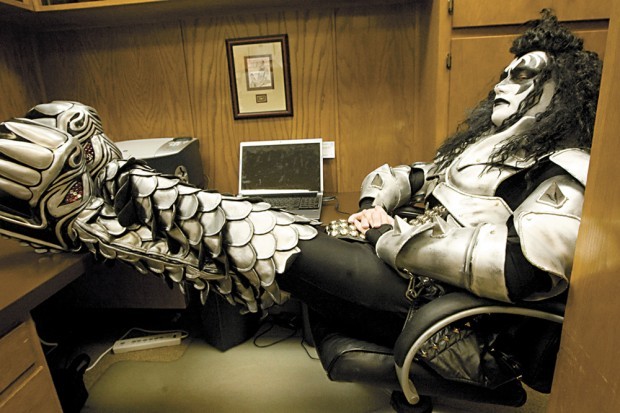 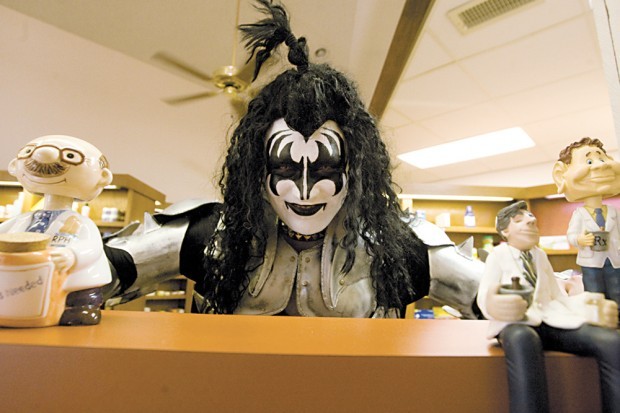 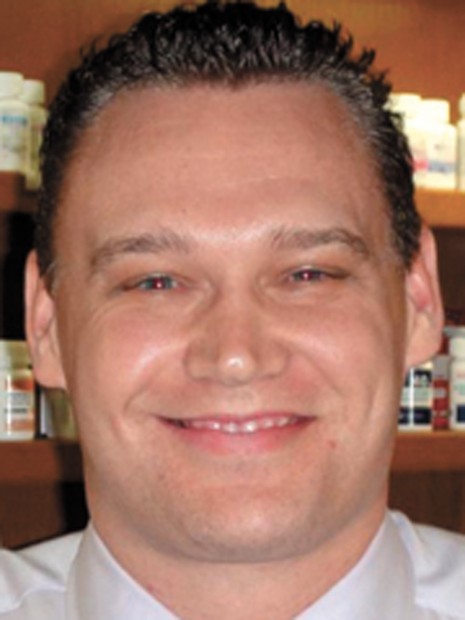 MOWEAQUA - Most days, Terry Traster shows up to work at Moweaqua Pharmacy looking neat, prim and proper, neck tie firmly in place and ready to help his customers. But not today.

Today, he stands 6'5'' in devilish, grinning boots and with eyes the color of blood, face painted black and white, dressed head to foot in armor and leather. Today, the doctor of pharmacy embodies Gene Simmons, bass player for his favorite band, KISS.

Audiences at this year's Decatur Celebration may remember having seen the KISS devotee among the crowd at several Celebration shows. Dressed in costume and towering over nearly everyone, Traster is tough to miss.

In addition to his obvious attendance at the two shows by tribute band KISS Army, he could also be seen in the crowd for performers like Charlie Daniels and The Man in Black tribute to Johnny Cash, singing along to country and rock songs alike. Traster is nothing if not well-rounded. As both a self-made pharmacist in a small town and a KISS superfan, he has to be.

"Some of the people who come in know I'm such a big fan and have the costume, but most don't," Traster said. "I like small towns and the small town lifestyle. I know it sounds weird coming from somebody in a costume like this, but every day on the way to work I pray to God - literally pray - that I will do everything I can for the people of Moweaqua that day and that I don't make any mistakes."

At 32 years old, Traster wasn't around for the height of KISS's popularity in the 1970s. He had always been a fan of their music as a child, but he first got a chance to see the group in concert in 1996 on the KISS reunion tour. It was this show that pushed him over the edge from casual fan to rock disciple.

"They just blew me away," he said. "It was like no other band I've ever seen. During the stage show, they want everybody in the crowd to have a good time. They want to please you so badly. Something they've said is, ‘We wanted to be the band that we never got to see.' They wanted to leave everybody who came to the concert breathless, and they did."

Thus began Traster's quest to assemble his own KISS regalia, and only the most realistic pieces would do. The full outfit now worn by Traster is a replica from the band's "Destroyer" era, and it's as accurate as they come, right down to the hand spikes and studded cod piece, although the blood-red contact lenses are his own addition. Most of the costume is an amalgam of leather, plastic and metal studs, which, although lighter than full plate mail, still weighs quite a bit and can be sweltering on a hot summer day. Even during a quick interview, the complexity of the costume gave Traster some trouble, as the KISS perfectionist jury rigged a tape solution to a broken boot zipper.

"This figures," the slightly frustrated Traster said, attempting to zip up a thigh-high boot covered in metallic scales. "Second time I've ever used these boots, and the zipper breaks."

The first time was at Celebration, where Traster became a mini-celebrity overnight. When spotted in the audience for KISS Army or other shows, people swarmed to Traster to introduce themselves and take photos. Like an amusement park entertainer, he enjoys posing with children and sharing his love of KISS with other fans. More than anything, he tries to pass on an anti-drug message that resonates with him both as a pharmacist and a fan of KISS.

"Gene did everything right in life, and that's why he was an idol of mine," Traster said. "He went to college and graduated and was a teacher in New York public schools before becoming a rock star. He did it the right way. The other thing is this: Gene has never done drugs, and I have never done drugs. He tells kids what I tell everybody: ‘Don't even try them, it leads you nowhere.' That's one of my biggest sticking points-I hate bands that glorify drug use to kids."

Not everyone around the pharmacist can get on board with the KISS fandom. While Traster fiddled with one clasp or another on the complicated costume, his niece Kayla kept an eye on his 5- and 3-year-old sons, Taylor and Titan. She admitted she thought her uncle's fandom and costume were a little silly.

Traster's young sons seemed mostly indifferent to their armor-plated father's hobby. They'd rather play with their toys, at least for now.

"My daddy likes KISS," said 3-year-old Titan. On their father's listening habits, Taylor chipped in, "Sometimes he listens to it lots."

And yet, perhaps more remarkable than Traster's KISS fandom is the way he became a pharmacist in the first place. When he was growing up on a hog farm in Bethany, his father lost the farm after disease wiped out the stock and died of cancer shortly thereafter. Traster was left with his mother and forced to make do.

"All my mother had ever done was work on a hog farm, so she had no way to make a good living, but we did the best we could and got by," Traster said. "I went to pharmacy school at Butler University right out of high school and got my doctorate in six years."

It took "lots and lots of student loans" to accomplish this task, but Traster was able to graduate and find a job working for the former owner of Moweaqua Pharmacy. When the owner decided to sell the business, Traster, only 24, worked out a plan to purchase it.

"I went from being the son of a hog farmer who lost the farm to owning my own pharmacy in only a few years," he said. "I am extremely patriotic, because only in America could I go from where I was to where I am in such a short time."

Operating the pharmacy gave Traster the funding to expand his KISS hobby beyond the everyday - an absolute necessity when purchasing costumes that can cost an arm and a leg. Traster estimates he has spent into the thousands of dollars putting together the costume.

Even Traster's KISS mania, however, could be said to pale next to that of Barry Carr of Farmington, Ky., who created every piece of Traster's outfit. Carr, a former telemarketer, hung up his phone nine years ago to make rock 'n' roll costumes full time. He's made sets of KISS apparel reaching "into the thousands" for KISS fanatics willing to spend thousands of dollars for truly authentic clothing.

"I eat, sleep and drink KISS ever since they came onto the scene," said Carr, who by his count has attended 276 KISS concerts. "KISS was my first-ever concert. I was in first grade."

Carr has even produced KISS pieces for celebrity collectors like Don Johnson and Jack Nicholson, as well as filling the occasional odd order, such as a female Gene Simmons. The average time to create a costume is three weeks to a month, although he is currently working on 14 at once. Even the actual band has used his costumes in their "KISSTORY II" book, which details the history of KISS collectibles. His designs can be viewed at www.kisscostumes.blogspot.com.

Clad in his expertly made replicas, Traster is an odd sight, as a professional equally committed to his job and his intensive hobby. Perhaps surprisingly, he's never been in a band, although he enjoys occasional chances to sing in costume with local groups, and would like to get on stage more often in the future.

"I would like to have it where a local band would have me come on stage for a couple of songs per night in costume and all that," he said. "My favorite karaoke song to do is probably "Calling Dr. Love" - for obvious reasons."

Herald & Review photos/Lisa Morrison Moweaqua pharmacist Terry Traster does not normally look like this when he comes back with your prescription. Traster as Gene Simmons from the band KISS was so intimidating in his costume all other contestants in a look-alike contest disappeared during a recent appearance.