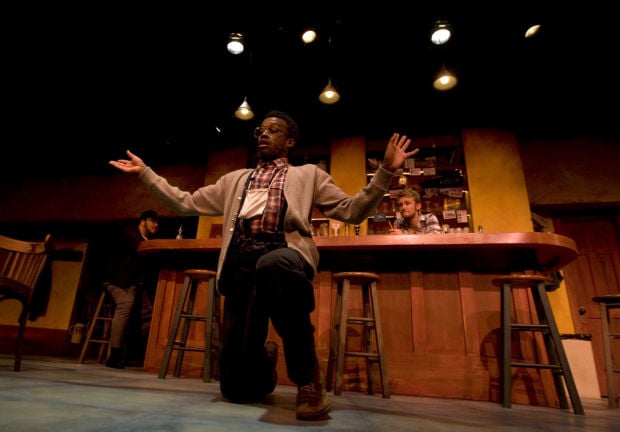 Terrence Hodge, playing Ray, talks about one of his conspiracy theories. 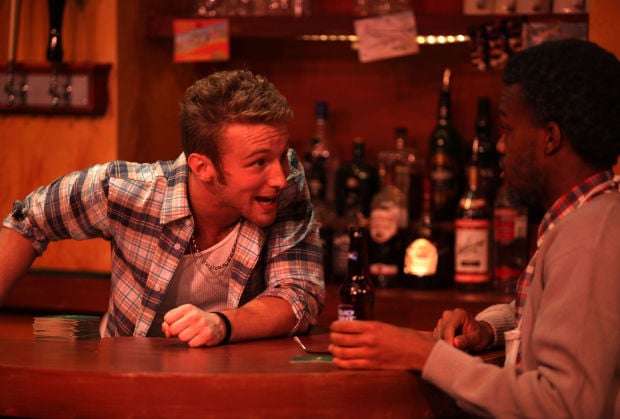 Joseph Bezenek, playing Adam, and Terrence Hodge, playing Ray, argue at the bar during a rehearsal of "Yankee Tavern." 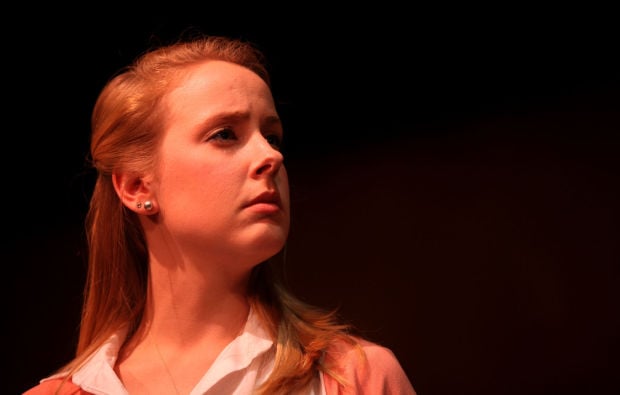 DECATUR — For many professors, teaching in school is as much a tool for their own continuing education as it is for their students. Leading young minds in new activities is often a good excuse to expose oneself to new experiences.

Case in point: Millikin University professor Sean Morrissey’s decision to direct “Yankee Tavern,” the play opening this weekend at Pipe Dreams Studio Theatre. Despite being a theater educator, Morrissey had always focused on directing musicals in particular. He has never directed a regular play until right now.

“Usually when we do a musical we have eight weeks of rehearsal and I’m creating a series of dances out of nowhere,” he said, comparing the two experiences. “Here it’s nicely different, we don’t have rehearsal every hour of every night. It’s also offered me an opportunity to work in the room and not have everything planned in advance.

“I’ve worked really organically and collaboratively with the four actors in the play on everything that will happen. They’ve had a tremendous amount of input into what you’re going to see.”

“Yankee Tavern” is a one-location play perfectly suited to the black box theater space of Pipe Dreams. It takes place in a New York bar room as the name suggests, but how that space is inhabited was a decision left up to Morrissey and his actors. He's never seen the play before, and said he considers that to be an advantage when staging a production.

“If I haven't seen it then I can't be thinking of someone else's design and staging ideas; I can bring my own interpretation to it,” he explained. “When I did 'Sweet Smell of Success' I hadn't seen it before, which was really nice because it gave me complete freedom. It's actually very helpful.”

At its heart, the show revolves around the concept of conspiracy theories and the people who indulge in them. The characters are bar owners, regulars and strangers who debate various conspiracy theories on such topics as the moon landing and the JFK assassination, but the most important subject is the events surrounding the terrorist attacks of Sept. 11, 2001.

“I just think the idea of conspiracy theories area fascinating, it's so easy to get yourself lost in them,” Morrissey said. “What's interesting about them is that they typically either thrill you or infuriate you. The author Steven Dietz did a lot of research and the play contains quite a bit of historical fact. It's a really cool journey to go through and do research on the conspiracy theories for yourself.”

On a meta level, though, Morrissey believes the play itself is meant to be a bit of a mystery. Sitting in the black box space of Pipe Dreams, he intends the audience to feel like it is sitting at a corner table in the bar, watching a confusing and increasingly alarming scene unfold.

“In the course of working on this show we've come to think that Steven Dietz left out a lot of stuff on purpose, so the play is almost a conspiracy unto itself,” he said. “Although it gives us some information, I think there's just enough missing information that it makes you question exactly what is happening in the plot. It leaves a lot of unanswered questions, which makes people crazy, but I think that's the excitement of the show.”

Millikin student Terrence Hodge portrays the play's chief conspiracist, Ray. He was never interested in potential conspiracies before but said the role had made him reconsider his perception of those who devote themselves to unusual or counterintuitive beliefs.

“We've all run into someone who has an 'answer' for everything,” Hodge said. “But with the right information they can shatter your belief system and everything you've known to be true for your whole life can be brought into question. In this play, it's up to the audience to make the decision of how deep they want to go.”

Decatur Christmas Parade to usher in holiday season on Saturday

Decatur Christmas Parade to make its way through downtown Decatur.

Terrence Hodge, playing Ray, talks about one of his conspiracy theories.

Joseph Bezenek, playing Adam, and Terrence Hodge, playing Ray, argue at the bar during a rehearsal of "Yankee Tavern."