Become a Member
Read Today's E-edition
Share This
MARQUEE: Reviews of 'The Conjuring: The Devil Made Me Do It’
0 comments
Share this
1 of 2 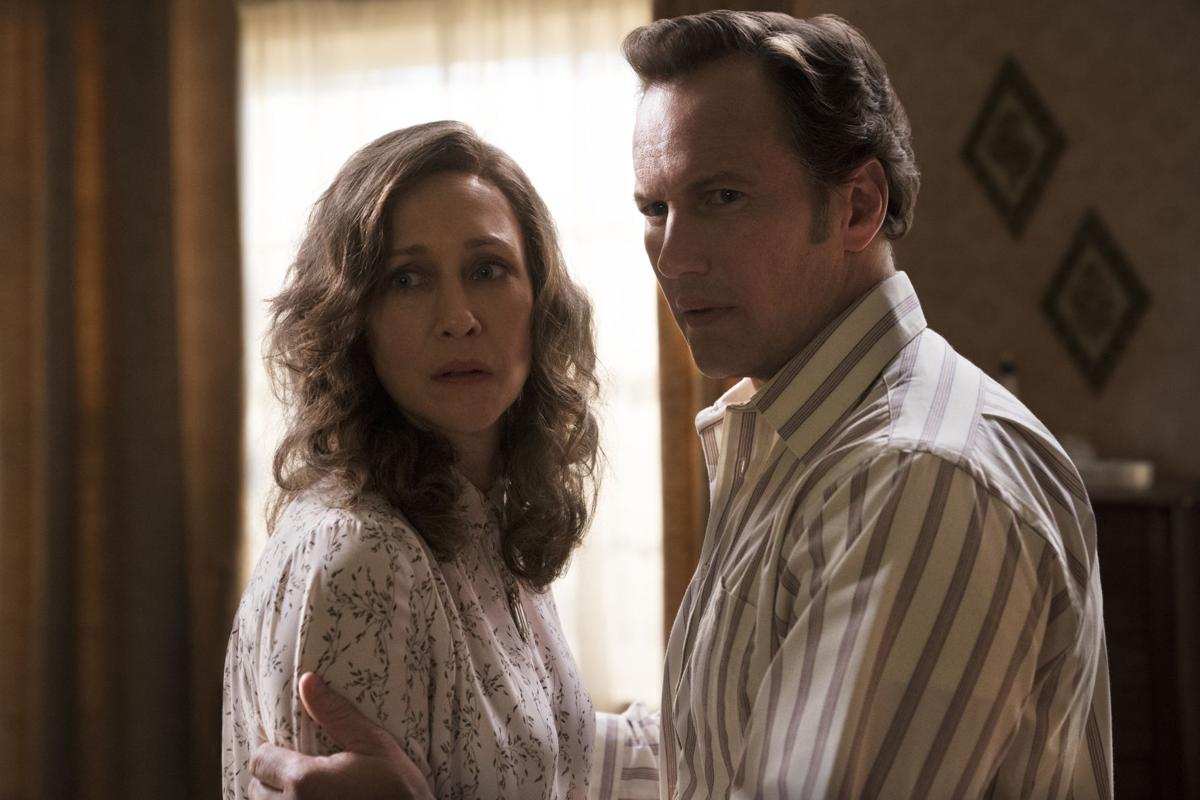 Vera Farmiga as Lorraine Warren and Patrick Wilson as Ed Warren and in New Line Cinema horror film "The Conjuring: The Devil Made Me Do It," a Warner Bros. Pictures release. 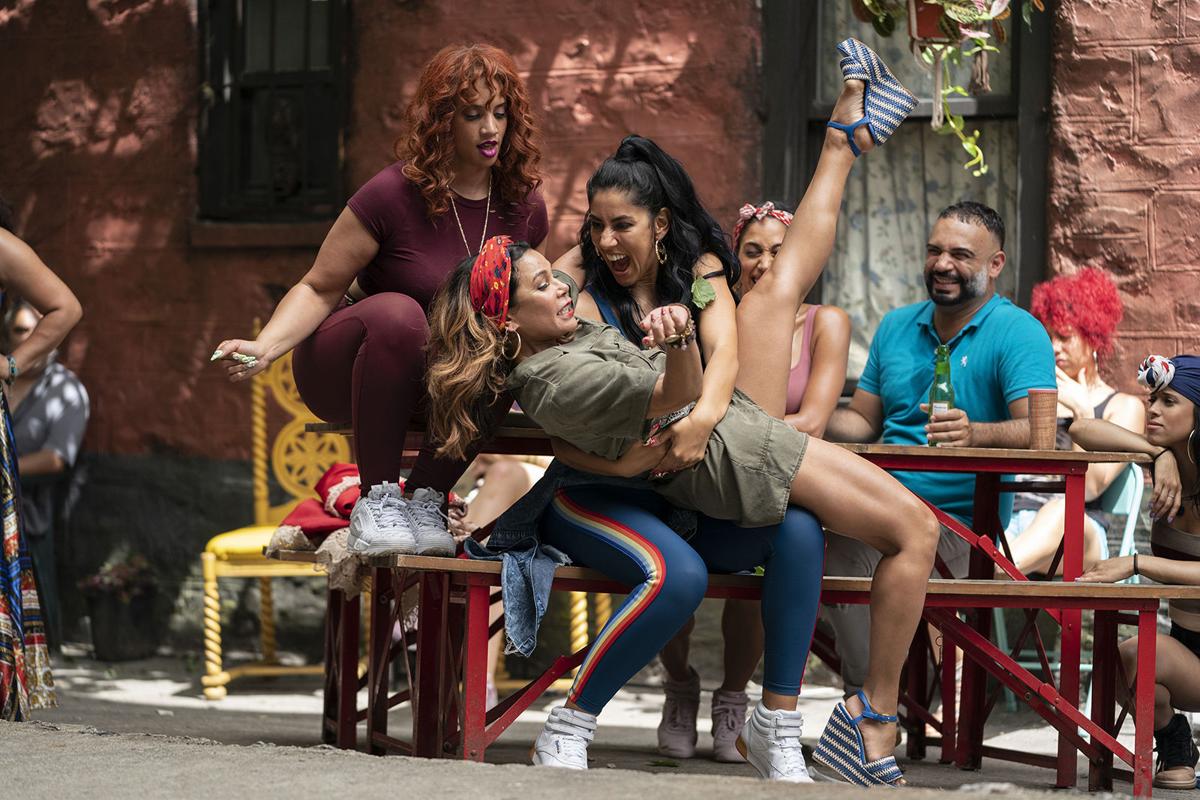 From left to right: Dascha Polanco as Cuca, Daphne Rubin-Vega as Daniela and Stephanie Beatriz as Carla in Warner Bros. Pictures' "In the Heights."

'The Conjuring: The Devil Made Me Do It’

A more accurate subtitle would be "Cupid Made Me Do It."

The actual title might make you think the somber horror series has suddenly gained an ironic sense of humor. It hasn't, but the third in the "Conjuring" series about "paranormal investigators" Lorraine and Ed Warren tantalizes us with hints of the romantic bond that fueled the work of the husband-and-wife team, played again by Vera Farmiga and Patrick Wilson.

"Devil," in which havoc ensues after the wayward exorcism of a possessed child, comes complete with a shot of a fedora-wearing priest, silhouetted from behind as he looks up a staircase to the kid's house, a fairly obvious homage to "The Exorcist." We also get the standard exorcism menu of foaming lips, flailing limbs, holy water and festering boils.

The devil turns out to be working through a never-fully-developed mystery woman, but what's compelling about "Devil" is how the Warrens remain united in faith and love. Their work takes a toll on them, both physically (he has a heart attack) and emotionally (an empath, she empathizes too much for her own good). But Farmiga and Wilson create such a strong sense of teamwork and affection that we understand why the Warrens pick up the phone every time someone calls and says there's a hellmouth in their crawl space. The Warrens answer because they think they can help and they know they can count on each other.

It's hard to know how much of any of the "Conjuring" movies is true but there's an increasing sense in them that what would be most compelling is a sequel where the devil stays busy elsewhere so there's time to focus on the Warrens, both of whom are now deceased. Why, for instance, did they pursue work that apparently cost them so much and what did their daughter, who pops up briefly in "Devil," make of it all?

Before his blockbuster Founding Fathers remix “Hamilton,” Lin-Manuel Miranda burst onto the scene with his Tony-winning ode to his hometown, the musical “In the Heights.” Set in the gentrifying Manhattan neighborhood of Washington Heights, the earnestly ebullient “In the Heights” firmly established the Miranda signature sound, a blend of hip-hop and Latin music with big, bold, brassy Broadway ballads; a style born and bred of New York City. The play is seemingly a direct descendant of “West Side Story,” or at least in conversation with it, but Miranda’s outlook is far sunnier than the Jerome Robbins classic. Now, the cinematic adaptation of “In the Heights” seeks to cement the musical’s place in movie history.

Director Jon M. Chu is behind the camera for “In the Heights,” with Anthony Ramos stepping into the lead role of young Dominican bodega owner Usnavi (Miranda plays a local piragua vendor). Chu’s version allows the musical to soar above Washington Heights, combining magical realism with gritty urban details.

It’s hot, humid and the hormones are racing. Will Usnavi work up the courage to ask out aspiring fashion designer Vanessa (Melissa Barrera) before he departs New York for the Dominican Republic? Will sweethearts Benny (Corey Hawkins) and Nina (Leslie Grace) reunite while she’s back home from Stanford? What does Sonny’s (Gregory Diaz IV) future hold as a young "Dreamer"? Who holds the winning lottery ticket? These dramas play out against the landscape of a tight-knit but quickly changing community, as rents rise and the older generation transitions.

This will no doubt be a deserving breakout performance for the immensely talented and magnetic Ramos, who co-starred in the stage musical, as well as in “Hamilton.” However, it’s Hawkins, who co-starred as Dr. Dre in “Straight Outta Compton,” who stuns in his first screen musical role, as Benny. Who knew he had that voice? Those moves? Grace and Barrera are also superstars in the making. Mexican actress Barrera owns the screen in every moment, especially in a sizzling nightclub number. The entire film is a brilliantly woven tapestry of performances, music and environment, as well as the choreography by Christopher Scott and cinematography by Alice Brooks, two longtime collaborators of Chu’s.

It’s oh-so-easy to give yourself over to the rapid rhythms and heightened emotions of “In the Heights”: the lights are twinkly, the beers are cold, the pants are tight, the hips are loose and the beat is impossibly infectious. Be sure to see it as big and as loud as possible to fully experience all the joy this film has to offer. You’ve earned it.

'In the Heights,' 'The Fast & Furious' franchise, and worst final films, all on the latest 'Just to Be Nominated' podcast!

The hosts of the 'Just to Be Nominated' podcast talk 'In the Heights,' recommend films that 'Fast & Furious' heads would love, take a dip into entertainment news, and more!

All pairs on this list have the same basic plot once you strip away the details.

Vera Farmiga as Lorraine Warren and Patrick Wilson as Ed Warren and in New Line Cinema horror film "The Conjuring: The Devil Made Me Do It," a Warner Bros. Pictures release.

From left to right: Dascha Polanco as Cuca, Daphne Rubin-Vega as Daniela and Stephanie Beatriz as Carla in Warner Bros. Pictures' "In the Heights."