Saturday’s Juneteenth celebration at Central Park was important to the couple.

“It should be recognized,” she said. “You don’t hear about it in the history books.”

Tanikia Williams graduated from St. Teresa High School in 1992. She said she learned about the important date through online research, and the couple returned to Decatur to celebrate the first national Juneteenth holiday on Saturday.

“This is the initial stages of it, and I’m sure it’s going to grow, especially with it being a holiday,” Tanikia Williams said.

David Williams has seen bigger celebrations of the holiday in the southern areas of the United States.

“When you start coming north, you hear about it from the ancestors coming from the south,” he said. “This is necessary for us to come together as a community, to really show the community that this is what we do, we share with one another.”

Evelyn Hood organized the local Juneteenth events more than 25 years ago. “Evelyn was ahead of the game,” said Richard Hansen. “Because now Juneteenth is a federal holiday.”

On Thursday, President Joe Biden signed legislation setting aside Juneteenth, or June 19, as a federal holiday. The date has been recognized as the day in 1865 in which Union troops arrived in Galveston, Texas, and informed the last enslaved Black Americans that the Civil War had ended and they were free.

The local celebrations have changed throughout the years. Hood organized Juneteenth festivities in 1994 at Central Park, and the event later moved to other locations. “And there were just speakers and different stuff,” Hood said.

Organizers decided to return to the park last year during the COVID-19 pandemic with limited activities. This year, more entertainment and vendors were invited, including a favorite of Hood’s, Mr. Taps, whose real name is Ayrie King III.

“I like tap dancing anyway,” Hood said. “You guys have to see him for yourself, he does comedy and imitations.”

This year’s festivities are more special for Hood. “I’m in tears of joy, it’s not of sadness,” she said. “And to see people really enjoying themselves, it does my heart good.”

For nearly 30 years Hood has been trying to educate the community about the importance of Juneteenth.

“Then when they finally made it a holiday — now they are saying, ‘I got it’,” she said. “It’s not just the music and food. Don’t forget the history part of it.”

Before the afternoon activities began Saturday afternoon in Central Park, a group of community members met to learn about local history.

Ada Owens, activity director at the African-American Cultural and Genealogy Society Museum of Illinois, gathered members of the community on the northwest corner of the Macon County Courthouse to lay a wreath in memory of Samuel Bush. Bush was a Black man who was lynched in Decatur in 1893 after being accused of raping two white women. After the ceremony, the group marched to Central Park.

“So many people do not know this story,” Owens said. “And it happened in our neighborhood.”

Bush’s death was not new to the time, according to Owens. “But it was important to have a marker of some type for this person who didn’t get justice,” she said.

A committee is being formed to erect a permanent monument on the corner of the courthouse lawn in honor of Bush.

“It’s not to cause controversy, hate or whatever,” Owens said. “It is to spark conversation. So many people are scared to talk about what happened. It is history.”

Hansen, a Mount Zion High School history teacher, is seeking out committee members to organize the placing of the monument. The lynching of Bush nearly 130 years ago is important to the community, Hansen said. “That story has largely been forgotten over the years,” he said.

According to Hansen, a civil rights memorial center in Montgomery, Alabama, has honored the victims of lynchings throughout the years. The local committee hopes to partner with the national organization to design the monument. “Whatever state you’re in, all the markers look the same,” Hansen said.

Research and a design will be created by the local committee. “We organize it,” Hansen said. “They take care of the cost.”

“This is an important time in history,” Dampeer said. “Every time you have it, it becomes a bigger event.”

Ingram is the principal of MacArthur High School. Dampeer is a retired claims adjuster and works with children as a referee and umpire.

“We have a generation of kids that have missed some parts of the struggle,” Ingram said. “There are a lot of people who have sacrificed and put in a lot of extra time.”

The struggles the youth experienced, marched to and learned about last year still exist, according to Dampeer. But he is hopeful the new national holiday brings awareness.

“Whenever the federal government takes recognition of something this important is a monumental time in history,” Dampeer said. “This is an opportunity to get a history lesson. You can’t change people’s minds until you help them be aware.”

For anyone wanting to be a member of the committee of the Samuel Bush monument, contact the African-American Cultural and Genealogy Society Museum of Illinois.

President Joe Biden on Thursday signed legislation that was passed by Congress to set aside Juneteenth, or June 19, as a federal holiday.

The group gathered Saturday afternoon at VFW Post 99 for their major annual event honoring veterans for their service.

The following days will be used to study safety processes, and the park district will post any new rules on their website and social media by Monday.

M. Night Shyamalan will be the president of the 2022 Berlin Film Festival jury 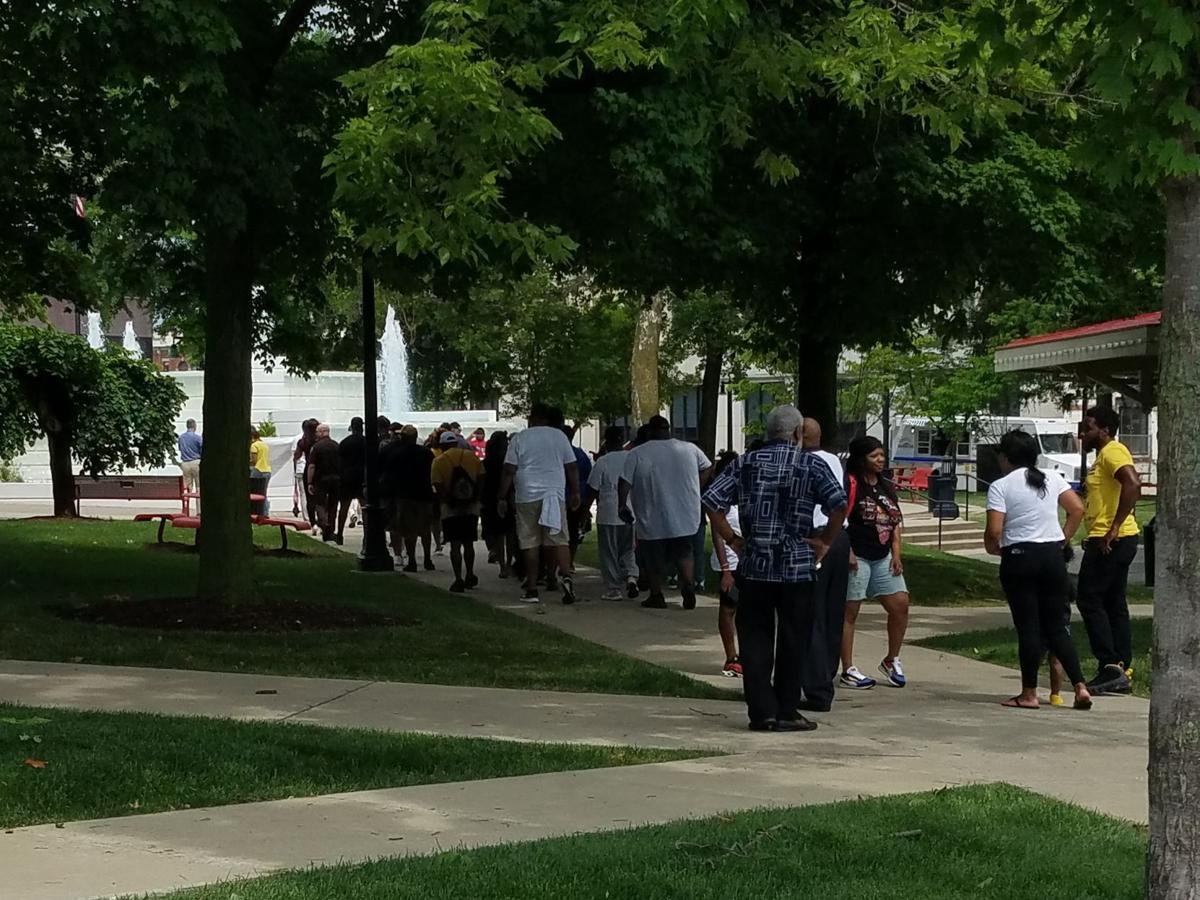 Marchers return to Central Park for the Juneteenth festivities. 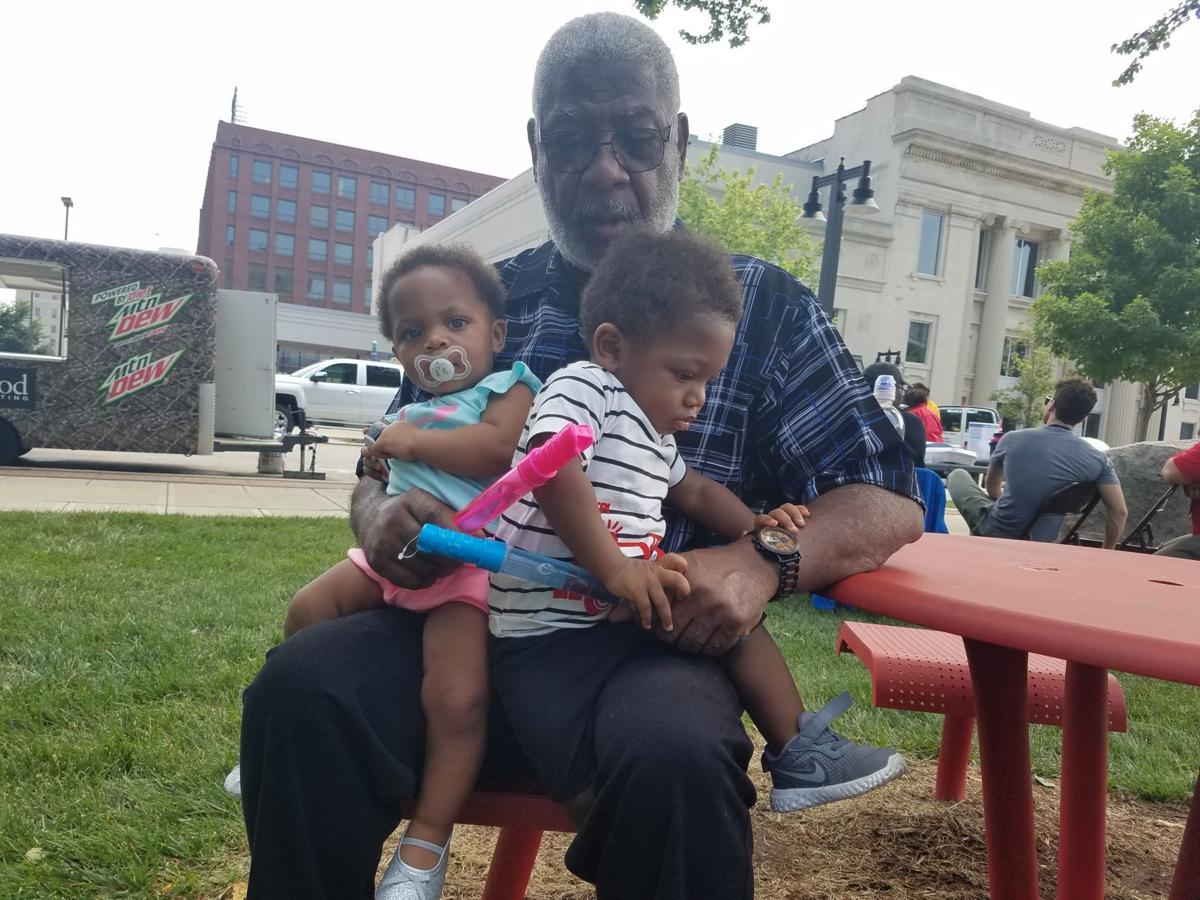 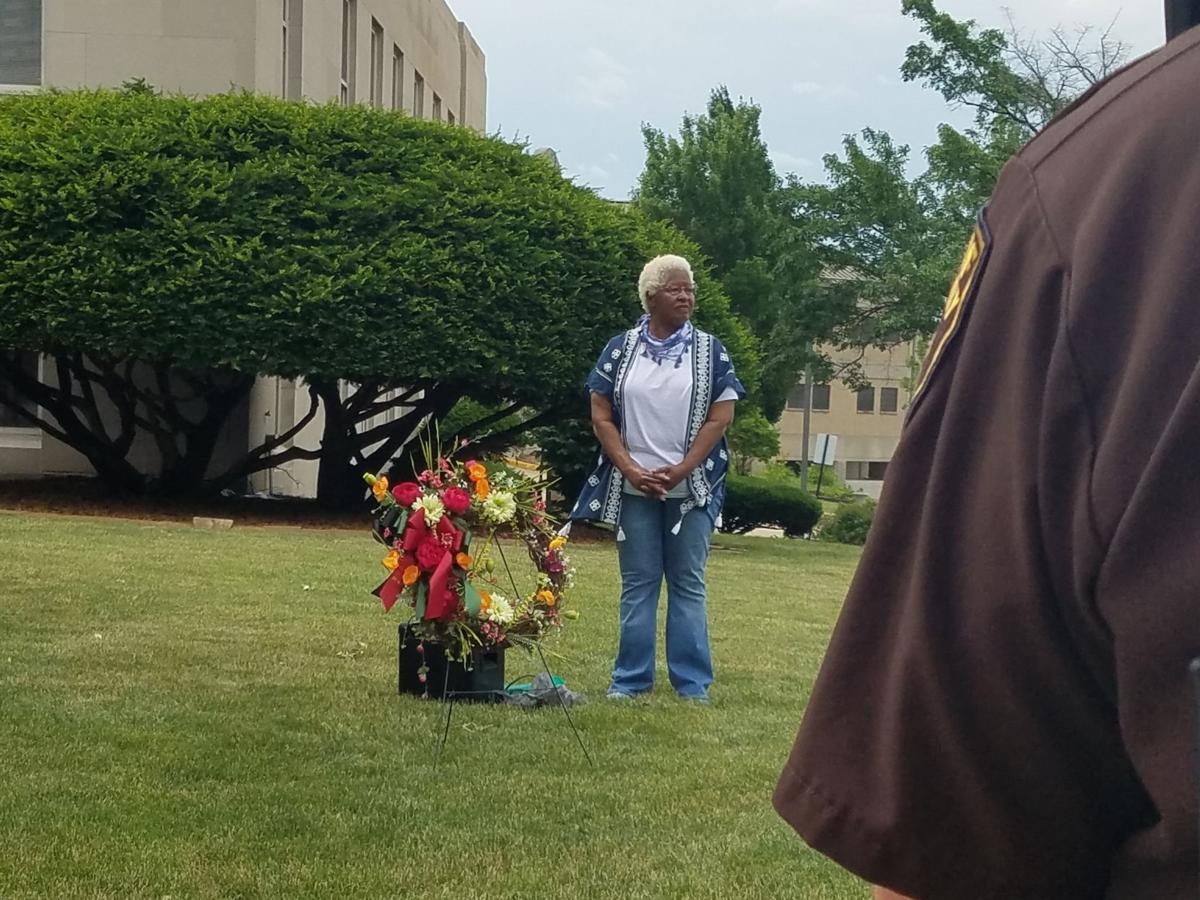 Ada Owens lays a wreath at the Macon County Courthouse in honor of the late Samuel Bush. 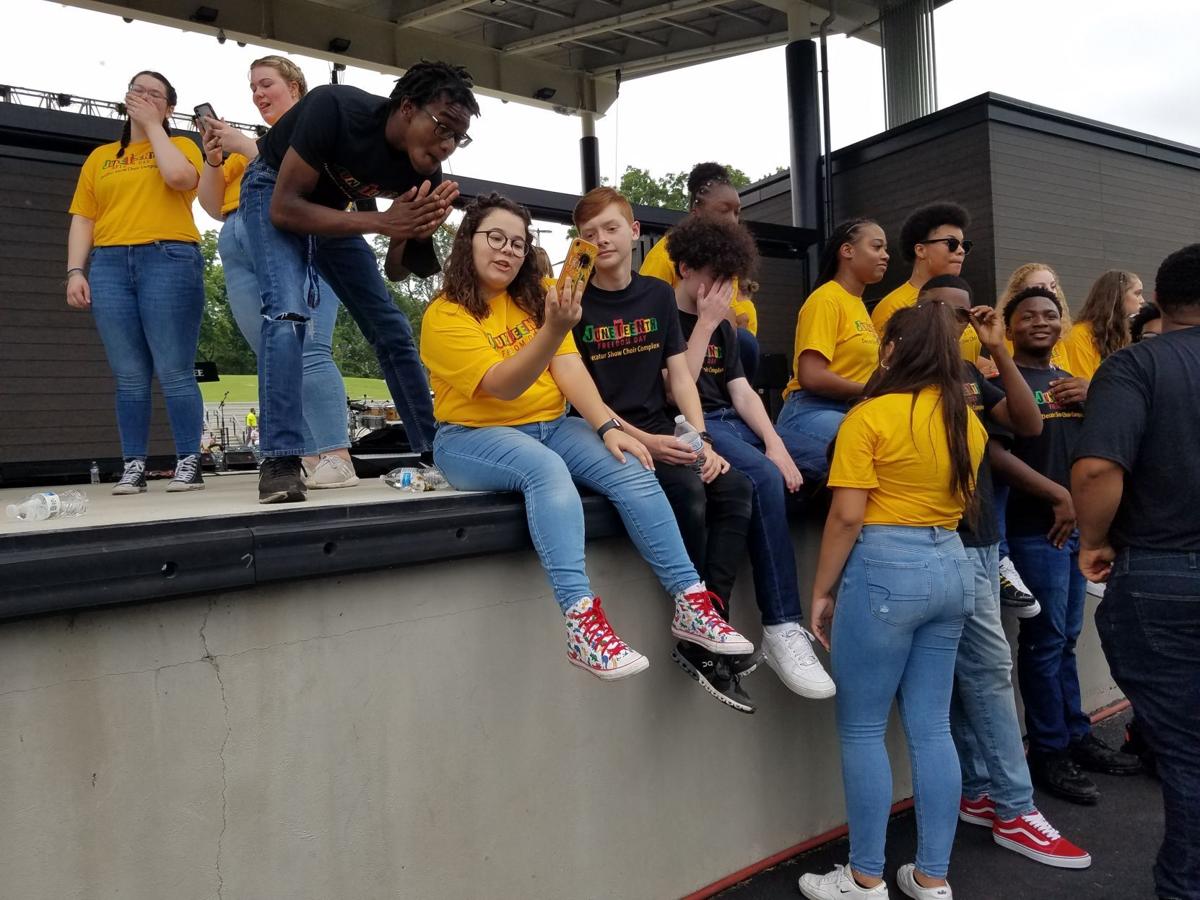 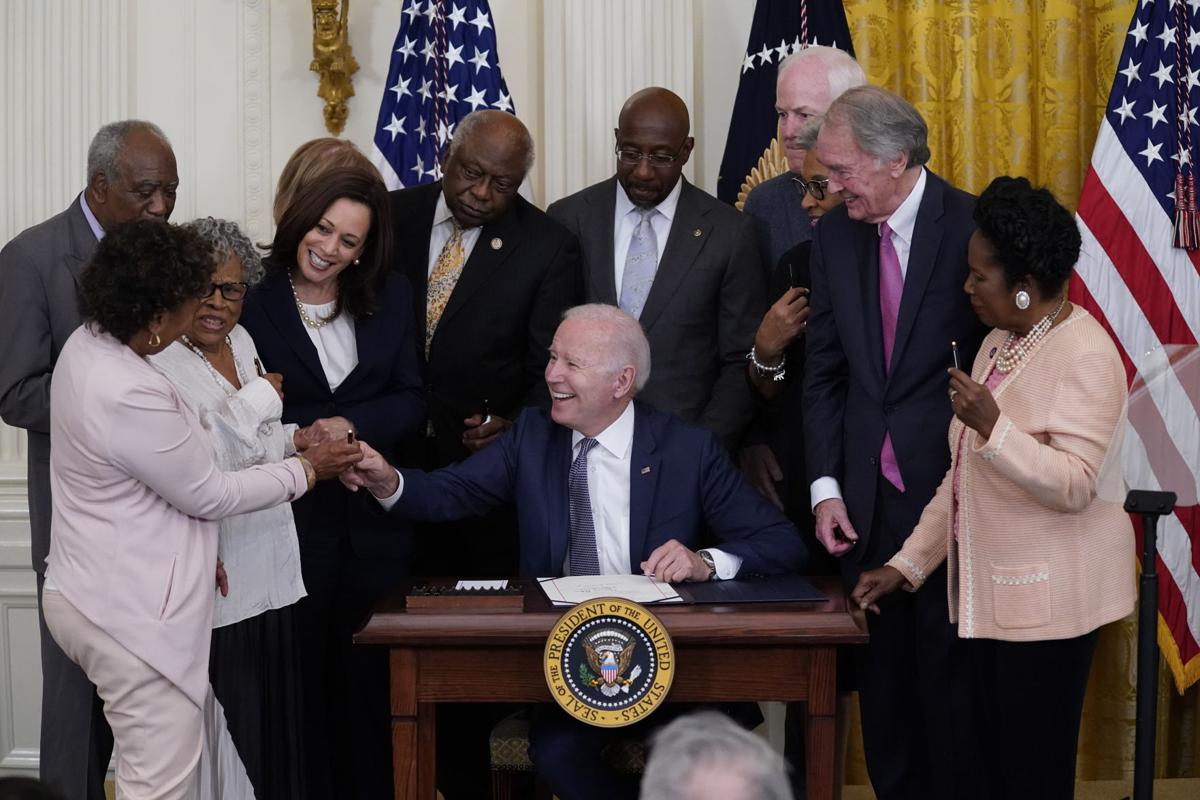 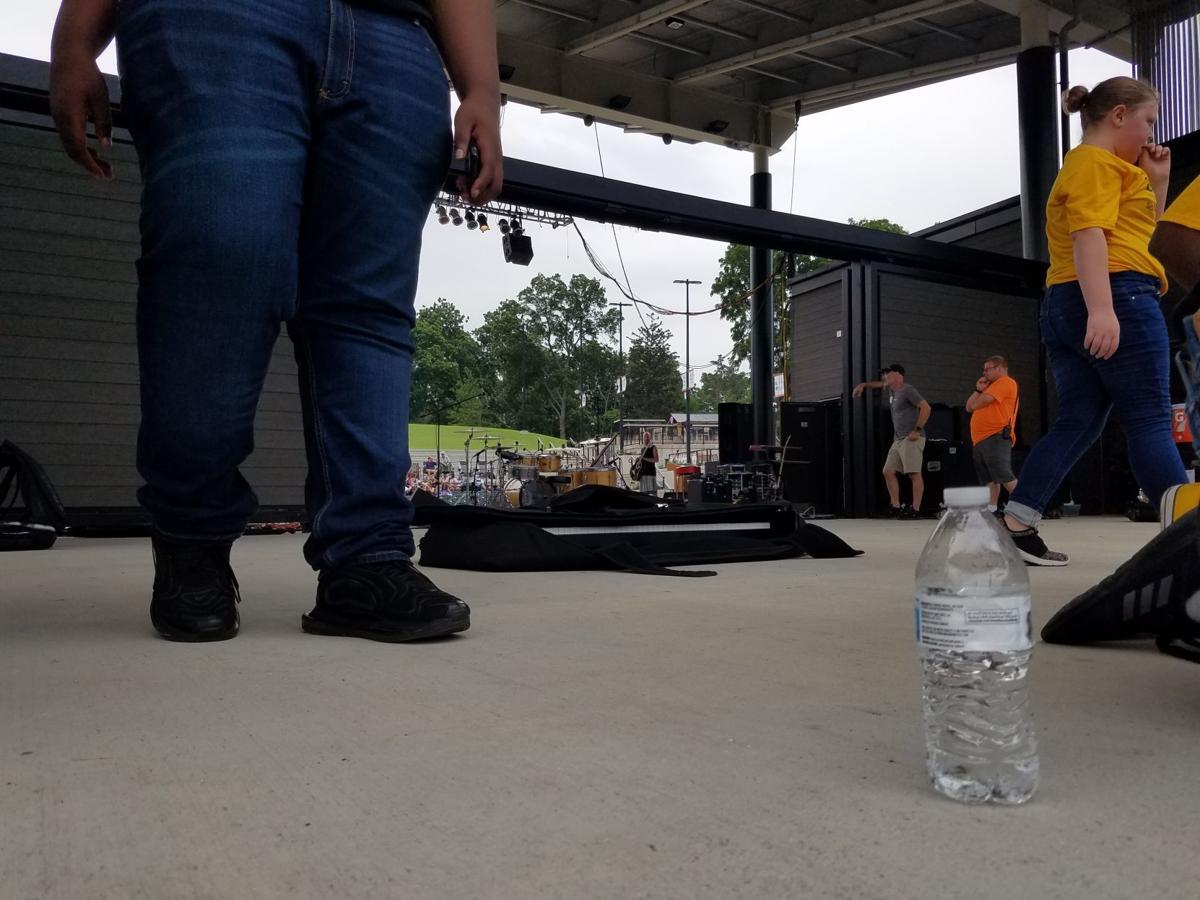 Backstage of the Devon Lakeshore Amphitheater during the 2021 Juneteenth celebrations.