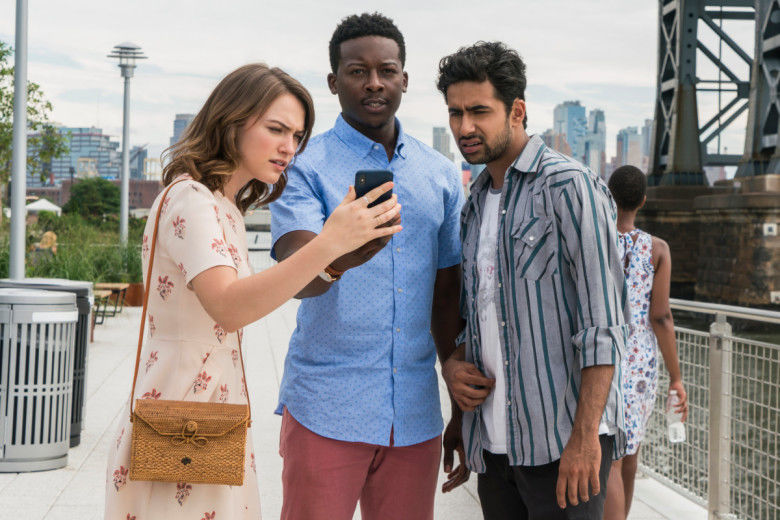 Q: Do you have any info on the actor who plays Aaron Rodgers’/Patrick Mahomes’ “agent” in the State Farm commercials? He’s funny.

A: That’s David Haydn-Jones playing Gabe Gabriel, the sports agent competing with State Farm agents for the attention of Rodgers and Mahomes. The Canadian actor is also known for a recurring role on the series “Supernatural” and for a long list of credits you can find on IMDB.com. If you like his performance in the State Farm TV ads, the company also tweets Haydn-Jones’ in-character commentaries. Or you can just follow him on Twitter, @davidhaydnjones.

Q: I do enjoy all the “NCIS” shows on CBS, but I’m missing “God Friended Me” on Sunday night, which was a refreshing change of pace from many of the others. Can you tell me if it has been moved? Is it still in one of the main time slots?

A: When big events come to television, a couple of things happen. One is that competing networks preempt their regular programming or put on reruns, rather than risk a new episode getting missed while people watch the big event. And, of course, the network with the big event preempts its regular shows to make room.

Sunday — generally the most-watched TV night of the week — is often home to major specials, so both of the things I mentioned have happened to “God Friended Me.” It’s not in CBS’s lineup on Jan. 19, where the NFC Championship was on Fox. It’s not on Jan. 26 because CBS has the Grammys that night, or on Feb. 2, when the Super Bowl is on Fox. And it’s not on Feb. 9, when the competition is the Oscars on ABC. Then, on Feb. 16, CBS has a new episode of “God Friended Me” listed.

Q: Can you please let us know if it’s true that John Thibodeaux, a supporting cast member of CBS’ “The Late Show,” died? The news was suddenly displayed at the end of a recent show.

A: That was a joke that, apparently, not everyone got. In a “Late Show” telecast in December (rerun more recently), staffers from the show asked “Star Wars: The Rise of Skywalker” cast members questions. Thibodeaux asked Billy Dee Williams what he would do if he had the force. Williams, in classic “Star Wars” fashion, made a choking gesture toward Thibodeaux, who began hacking. The choking was repeated, followed at the end of the segment by an “in memoriam” card for Thibodeaux. Enough people wondered about that for Thibodeaux to promptly tweet “Not dead.” To a wide reaction of: not funny.

Q: I love this quirky show “Doc Martin” that ended so suddenly without any indication of its return. Would you know anything about it?

A: Well, it is one of the shows I get asked most about, because of the fervor of its fans and the oddities of its scheduling.

As I have mentioned before, the U.S. rights to “Doc Martin” are owned by Acorn TV, a streaming service, which after a time grants telecast rights to a distributor that sells the program to individual public TV stations. Again, to the stations, not to PBS as a whole. Those stations then schedule it according to their needs. Last year Acorn completed its first run of “Doc”’s ninth season, the most recent one to be completed, and has it available for streaming along with the eight previous seasons. Acorn has not yet decided when to release Season 9 to TV stations, but it is on DVD and Blu-ray.

I should also point out, as you await new telecasts, that the ninth season consists of just eight episodes, in keeping with other recent seasons of the show. So savor them when you find them. There’s no clear word yet about a 10th season.

16 times Decatur was featured in TV and movies

No one expects TV shows to reflect absolute reality. But what if the tropes writers rely on are reinforcing dangerous misperceptions?

Renewed TV shows 2020: Find out which series will return for another season

Get a full rundown of all of the series returning for new seasons this year.

Q: I was wondering why networks don’t show TV shows like “Dynasty,” “Dallas,” “Knots Landing” and “L.A. Law.” They are all great shows.

Ted Danson, Tiffany Haddish, Drew Brees and more A-listers appear as participants. Plus, find out what else is in store!

The star also previews Roman's return to the One Chicago universe in a February 'P.D.' crossover.