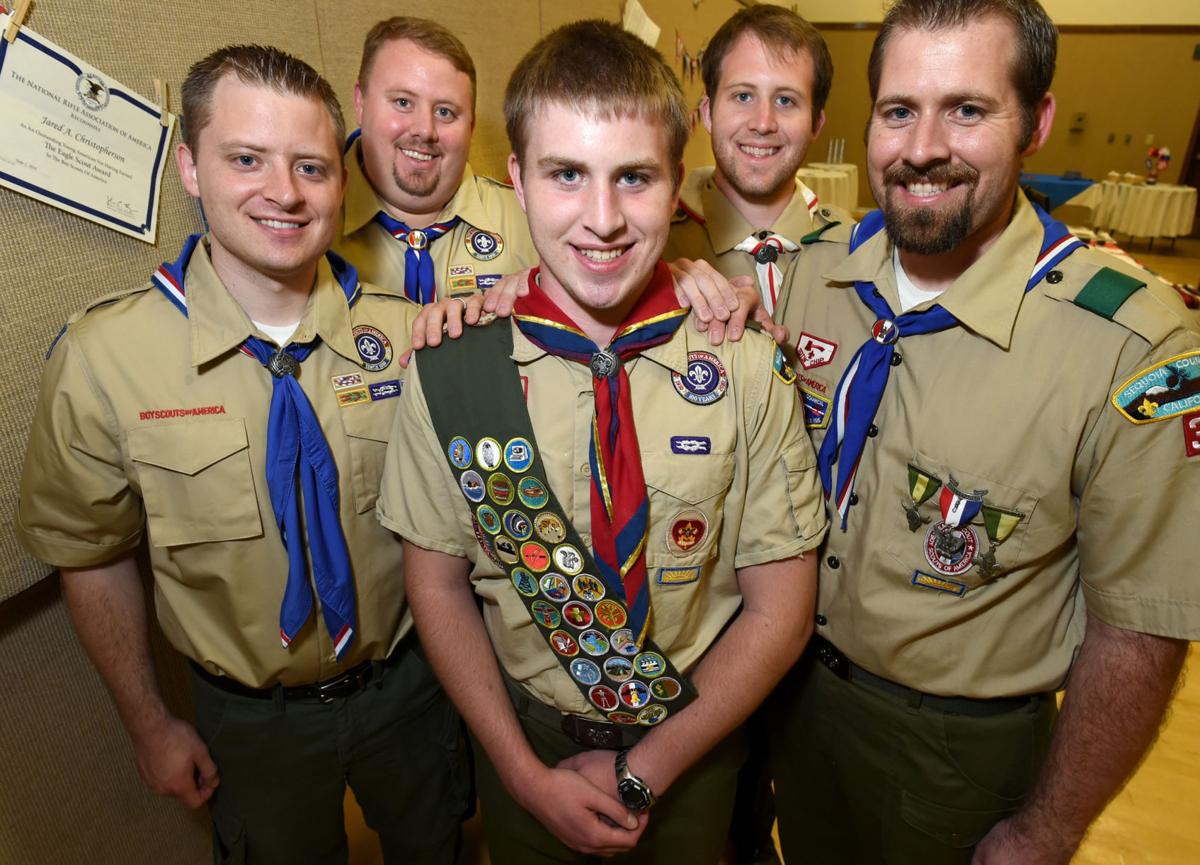 High school junior Jared Christopherson, center, is the youngest of five brothers to earn the rank of Eagle Scout. From left are his brothers Adam, Aaron, David and Jason. They were on hand to welcome Jared into the ranks of Eagle Scout at an honorary ceremony at the Church of Jesus Christ of Latter-Day Saints in Kerman, Calif. 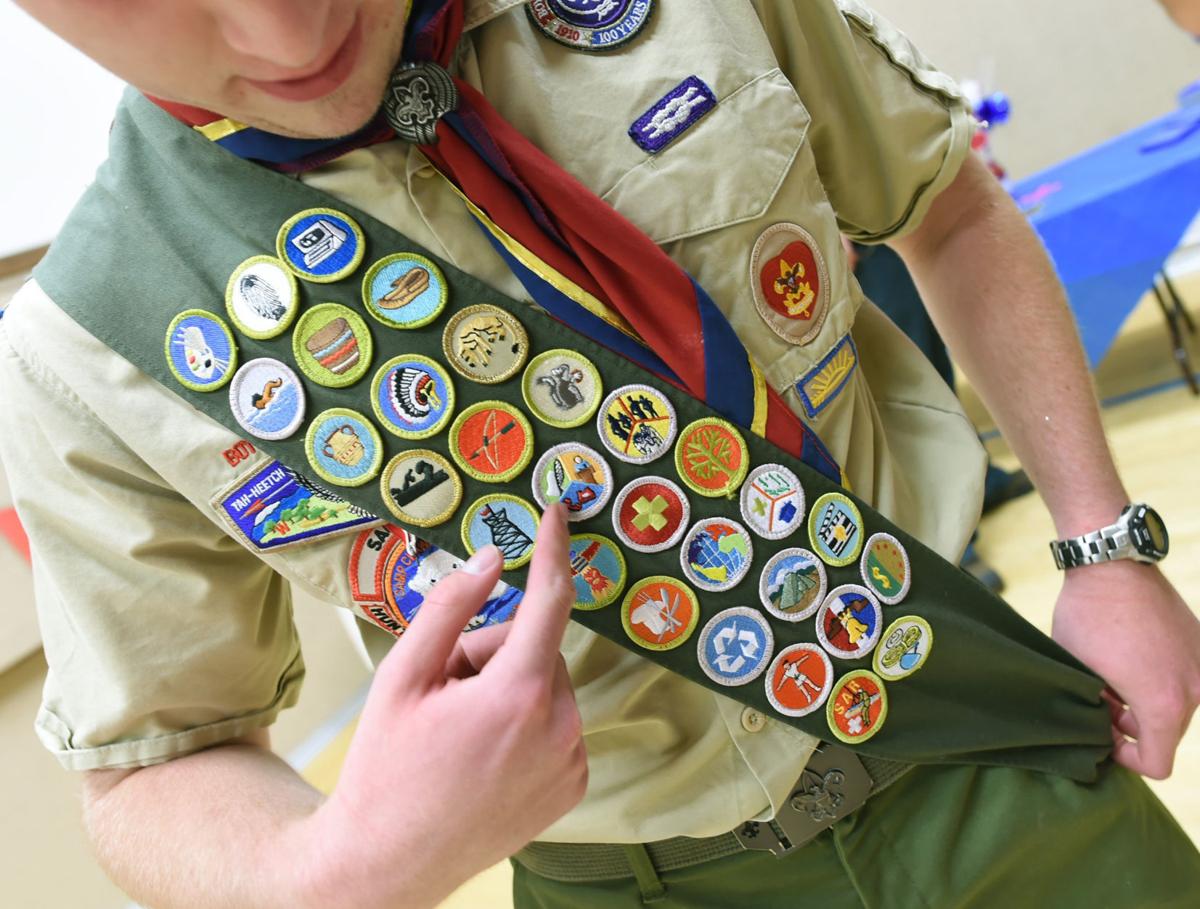 Eagle Scout Jared Christopherson shows his 29 merit badges. He is the youngest of five brothers to attain the rank of Eagle Scout.

KERMAN, Calif. — You could say 17-year-old Jared Christopherson had more than a little bit of pressure on him to become an Eagle Scout, the highest rank a Boy Scout can earn.

Jared’s father was a Scoutmaster, and his four older brothers became Eagle Scouts. The eldest of the brothers, 34-year-old Aaron Christopherson, has no trouble pointing out what Jared’s fate would have been had he failed to reach scouting’s pinnacle.

“Really, if he didn’t, we would have all made fun of him for the rest of his life because he would have been the black sheep,” Aaron teases as the brothers stand in a circle together before Jared’s Eagle Scout Court of Honor at the Church of Jesus Christ of Latter-Day Saints in Kerman, where Jared received his honor. “It’s a tall order to have to meet. I’d like to mention I set the standard for the whole family.”

Becoming an Eagle Scout is no small feat. To become an Eagle Scout, Boy Scouts must earn 21 merit badges, complete a community service project, serve in a position of leadership and attend a leadership conference, among other things. The badges demonstrate proficiency in such subjects as first aid, finance, fitness, citizenship, communication, cooking and wilderness survival. Only about 5 percent of all Boy Scouts earn the rank of Eagle Scout, according to the National Eagle Scout Association.

Even more rare is a family full of Eagle Scouts, like the Christophersons.

The brothers talk about the journey — none more candidly than their eldest son.

Aaron jokes, sort of jokes, that he became an Eagle Scout so his parents would let him get his driver’s license.

Adam Christopherson, 29, a deputy district attorney for the Fresno County District Attorney’s Office, reminds his brother that my tape recorder is on, and Aaron revises his statement. Really, Aaron adds, the driver’s license at the end of the road was not the only, or even the primary, reason he kept at it.

“It teaches young men how to be leaders,” Aaron says, “and instills morals and values that sort of transcend and set the tone for the rest of your life.”

Aaron and Adam both did Eagle Scout projects that helped birds. It’s undecided which was the best. As Adam recalls the number of owl boxes he built, Aaron jabs, “certainly not 500,” referring to the 500 dove cones — supports made of wire for doves to build nests in — that he made for the Department of Fish and Wildlife in Huron, Calif.

But the brothers agree on this: Jared’s project — constructing 150 feet of wooden railing for a wheelchair ramp at Katey’s Kids Park in Kerman — was likely the most time-intensive and involved project of the bunch. Jared logged 332 hours, typically working on the project twice a week for a month and a half. He took on the project after asking the city of Kerman what they could use some help with.

“I hope he’s proud of himself,” says Jason Christopherson, 32, “because he did a lot of work, and it’s very much not an easy thing to do. At some point, you have to discipline yourself and be independent. Your parents can only hold your hand so far. I think getting your Eagle is probably the one stage that separates your parents’ constantly pushing you from (you) having to develop some kind of internal desire and drive and discipline.”

Each brother’s motivation to become an Eagle Scout was a little different, but it’s safe to say the spark came from their father, James. As a boy, the avid fisherman joined Boy Scouts so he could spend more time outdoors.

Their Mormon faith also helped. Boy Scouts is the official boys’ activity program for the Church of Jesus Christ of Latter-day Saints.

“The LDS Church and scouting is so closely knit together, it’s kind of hard to tell the two apart,” Jared says. “It’s literally woven into the youth program.”

The Scout Law, which Jared has memorized, does a good job of explaining the virtues of scouting: “A Scout is trustworthy, loyal, helpful, friendly, courteous, kind, obedient, cheerful, thrifty, brave, clean and reverent.”

These attributes have served Jared’s older brothers well in their adult lives. Aaron is an environmental health and safety manager; Adam is a deputy district attorney; Jason is a pediatric psychologist; and David Christopherson, 25, is a student and research assistant with plans to go to medical school.

“I’m the least educated,” Aaron says. “I have a master’s degree.”

Their parents are also productive members of society. Father James is the technology manager for Producers Dairy in Kerman, and mother Julie is a labor and delivery nurse at Community Regional Medical Center in Fresno and a former Fresno County Women’s Chamber of Commerce Mother of the Year.

Jared, a junior at Central West High School, hasn’t decided what he’ll do after high school, but his family is sure his time as a Boy Scout — and now as an Eagle Scout — will help him tremendously.

David talks more about Boy Scouts during Jared’s Court of Honor ceremony. The hiking and camping was great, he says, but that was a small part of what Boy Scouts is really about.

“It’s about becoming somebody greater than you are,” David says. “The Boy Scouts of America wants to create citizens, people who can do good in the world.”

After Jared received his Eagle Scout rank, he made a promise to his brothers, his parents and about 50 other people who attended his special ceremony: “I will try to be the best person that I can ever be until the day that I die.”

President Joe Biden campaigned on a promise not to raise taxes on middle-class Americans. But a little-known provision in his big social programs bill could do just that. Tucked away in the American Families Plan, is a proposal to change the way capital gains taxes are paid on estates when people pass away. This seemingly […]

A Stock Market Crash May Be Coming: 5 Things to Do Now

History suggests a big decline may be on the horizon. But if you're mentally and financially prepared, it could be a huge moneymaking opportunity.

Here's the tornado damage reported in Central Illinois on Tuesday

The worst damage from a storm system that swept through Central Illinois on Monday occurred in Sangamon County, but Macon County wasn't spared.

Even as the 2018 Macon County sheriff’s election between incumbent Tony Brown and challenger Jim Root remains unsettled, the focus could soon turn to 2022 as another familiar name appears to be eyeing the office.

Damage bill is estimated at $20,000; even a nearby tree was caught on fire.

Murder trial gets underway that will probe the shootout in a restaurant bathroom that left one man badly wounded and another man dead.

Decatur Public Schools celebrated high school seniors who are going into the trades after graduation with a Career Signing Day.

Firefighters arrived to find smoke coming from the structure.

High school junior Jared Christopherson, center, is the youngest of five brothers to earn the rank of Eagle Scout. From left are his brothers Adam, Aaron, David and Jason. They were on hand to welcome Jared into the ranks of Eagle Scout at an honorary ceremony at the Church of Jesus Christ of Latter-Day Saints in Kerman, Calif.

Eagle Scout Jared Christopherson shows his 29 merit badges. He is the youngest of five brothers to attain the rank of Eagle Scout.