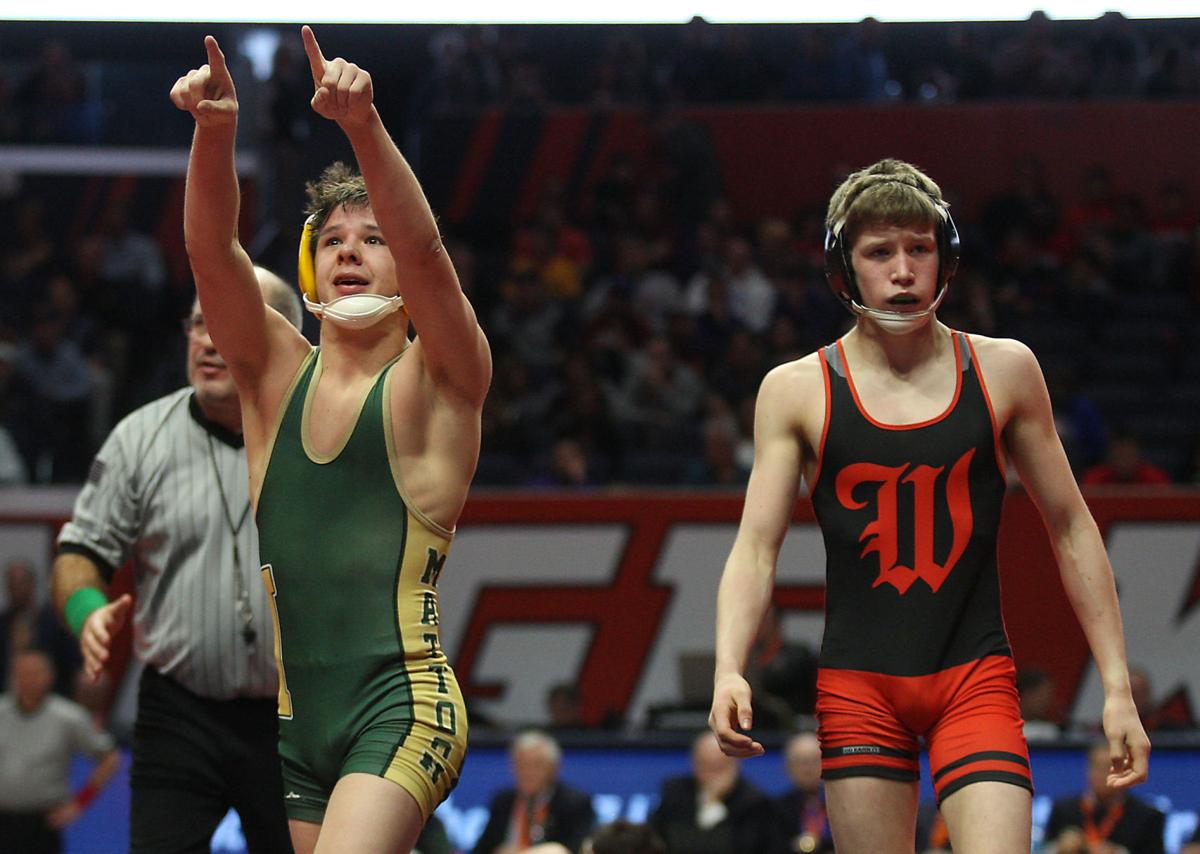 Mattoon’s Trevor Edwards reacts after defeating Washington’s Zeke Hulet in the Class 2A 113-pound semifinal to advance to the state championship match at the State Farm Center on Friday. 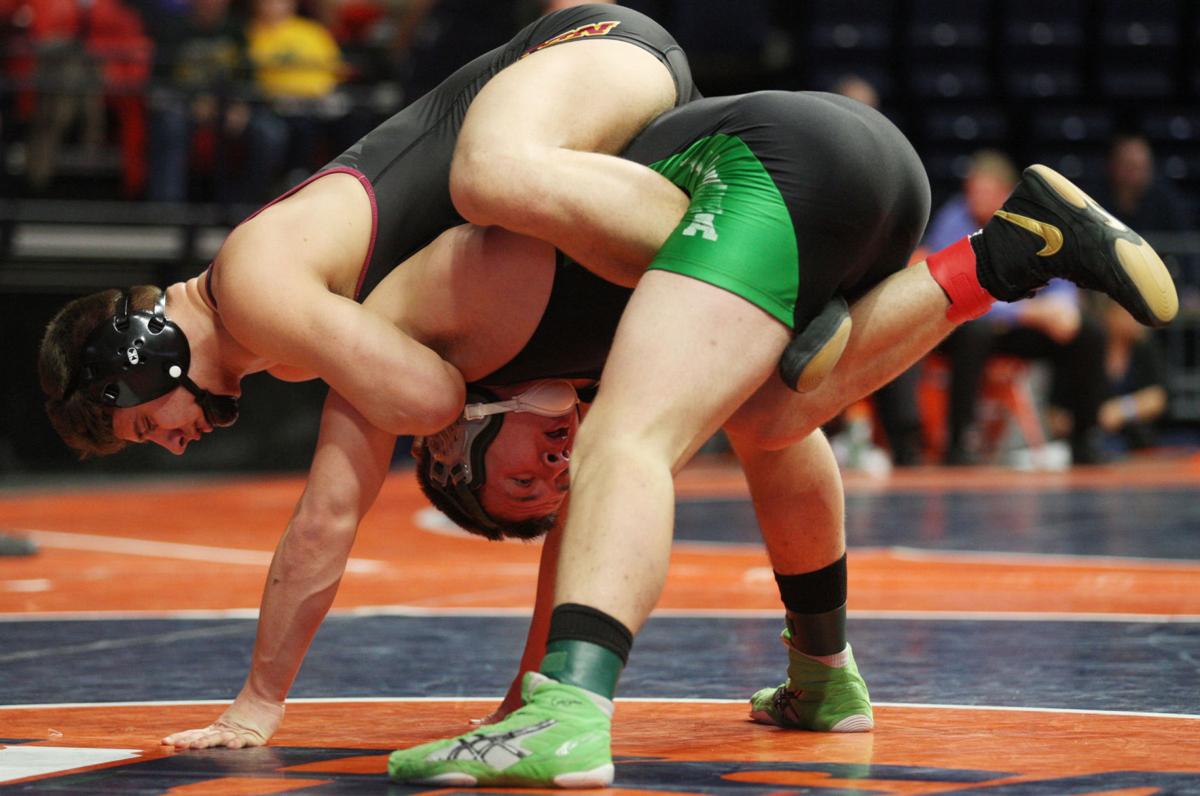 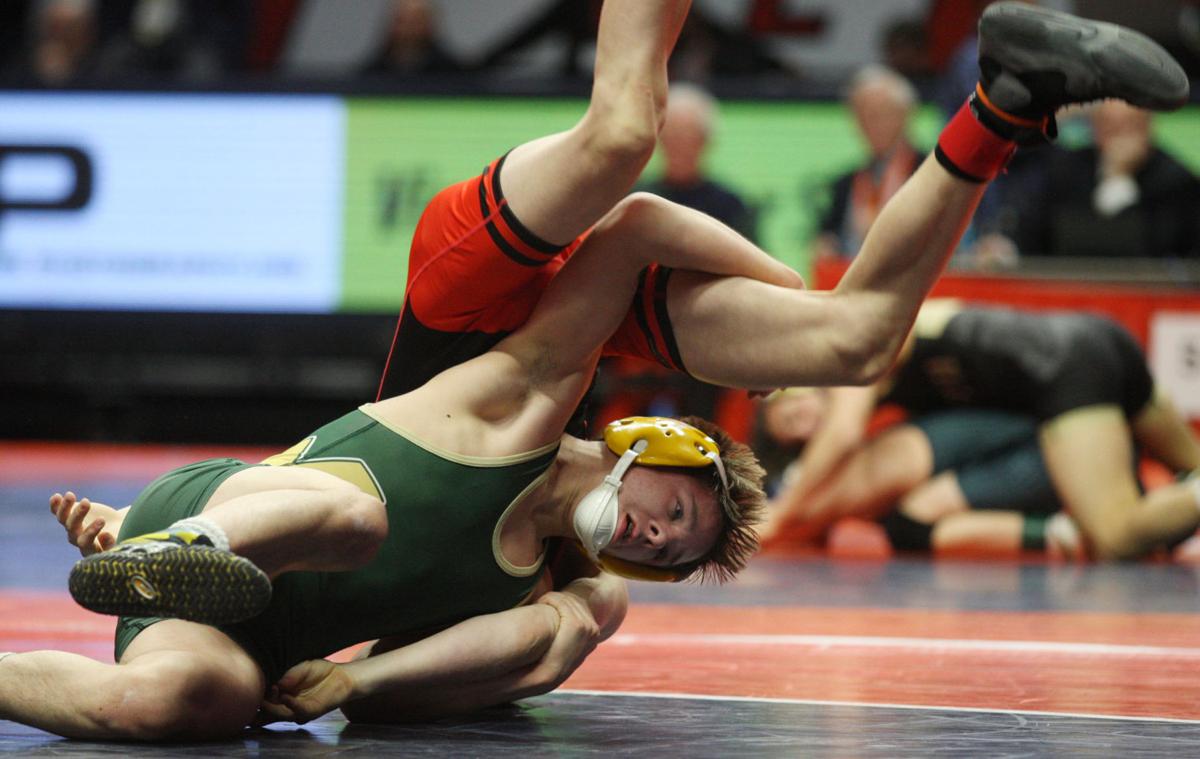 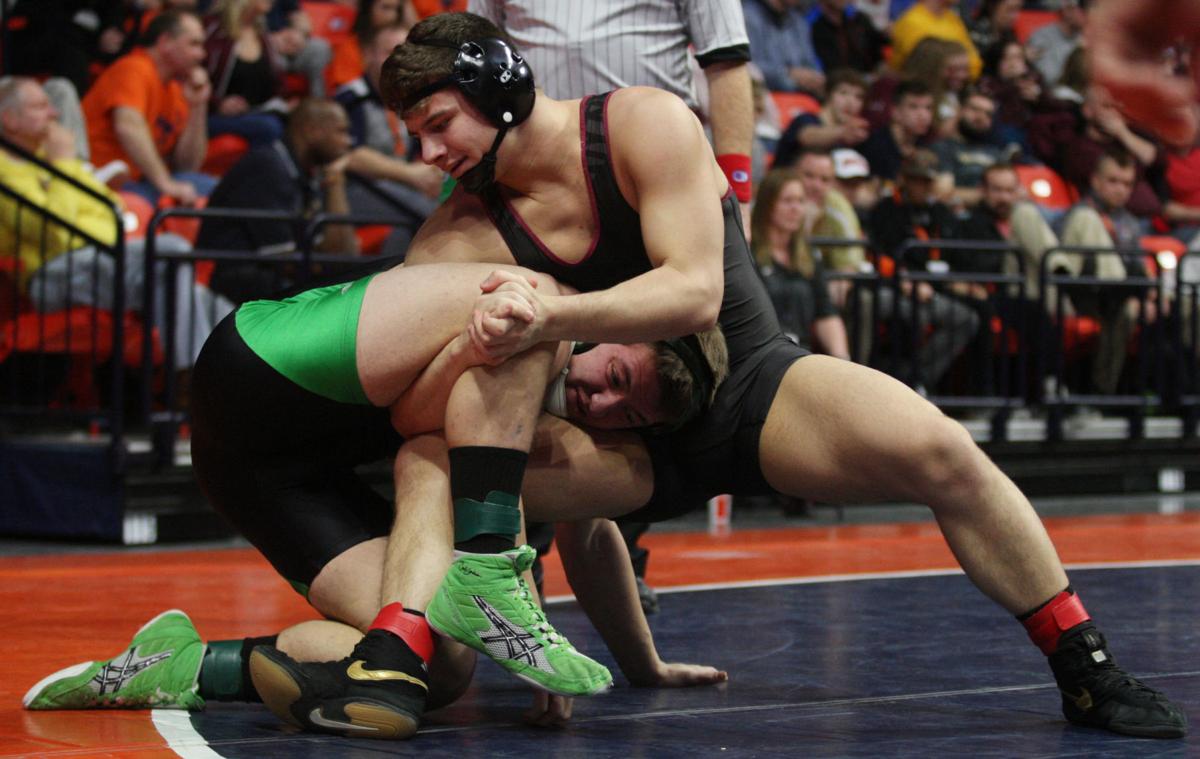 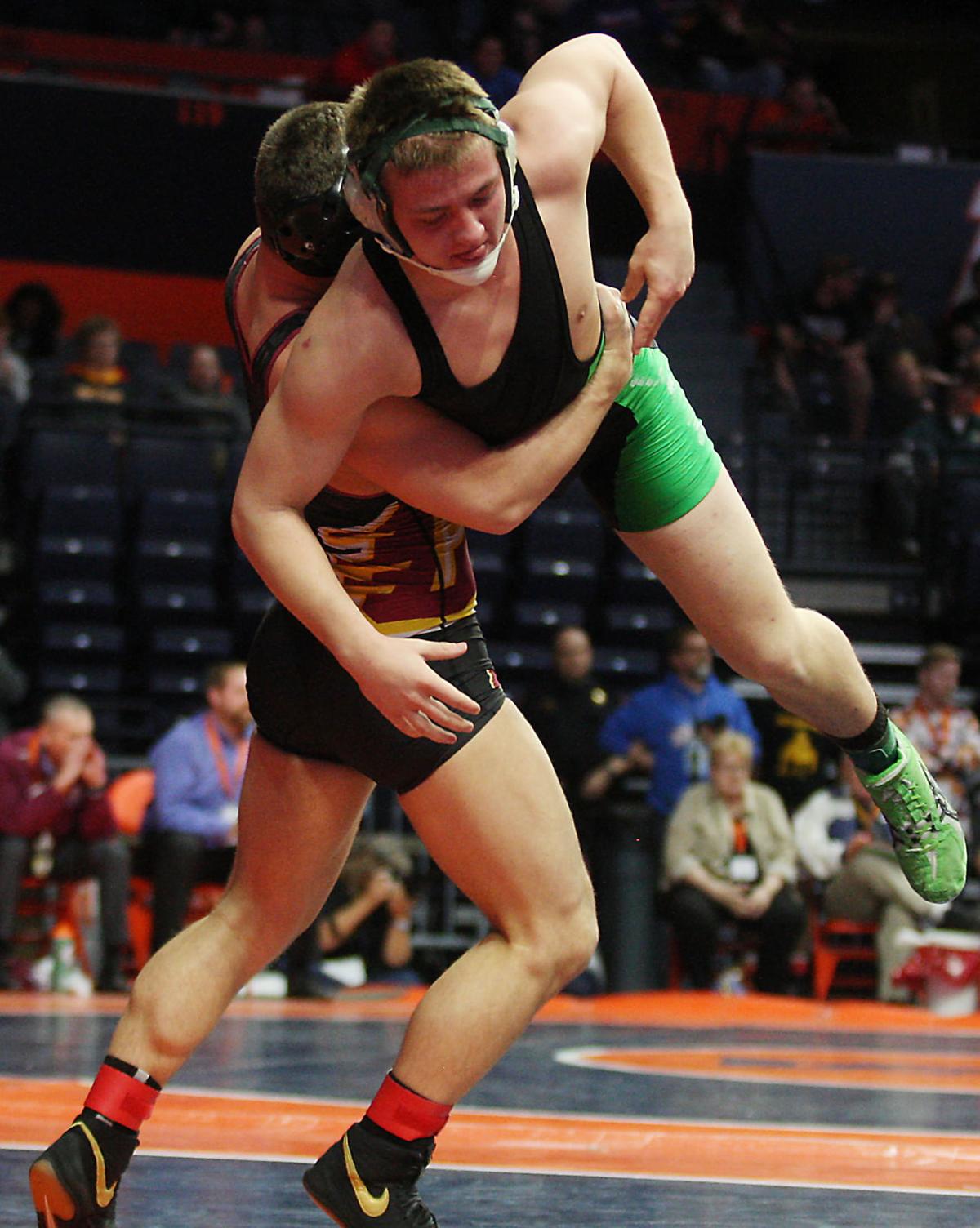 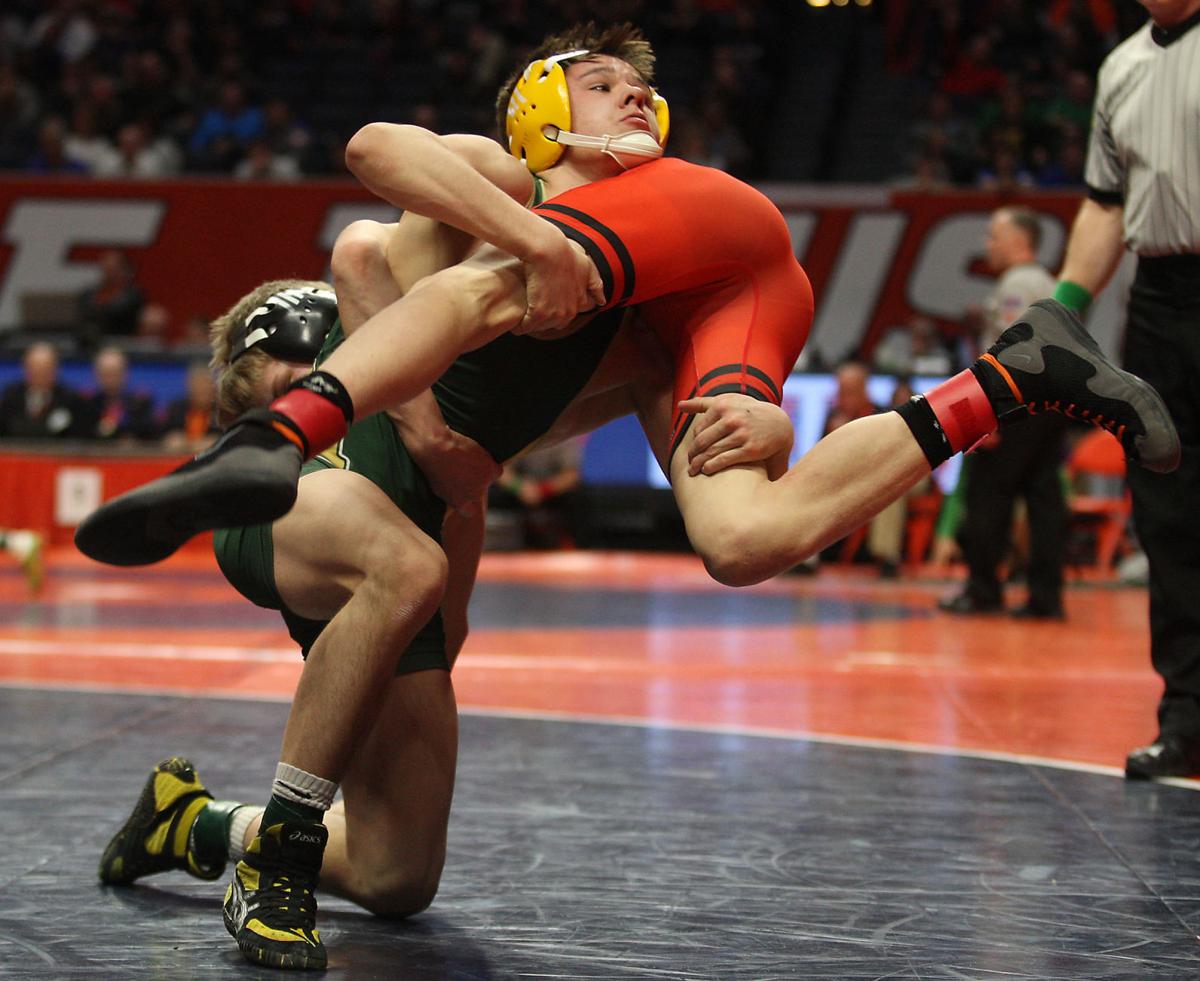 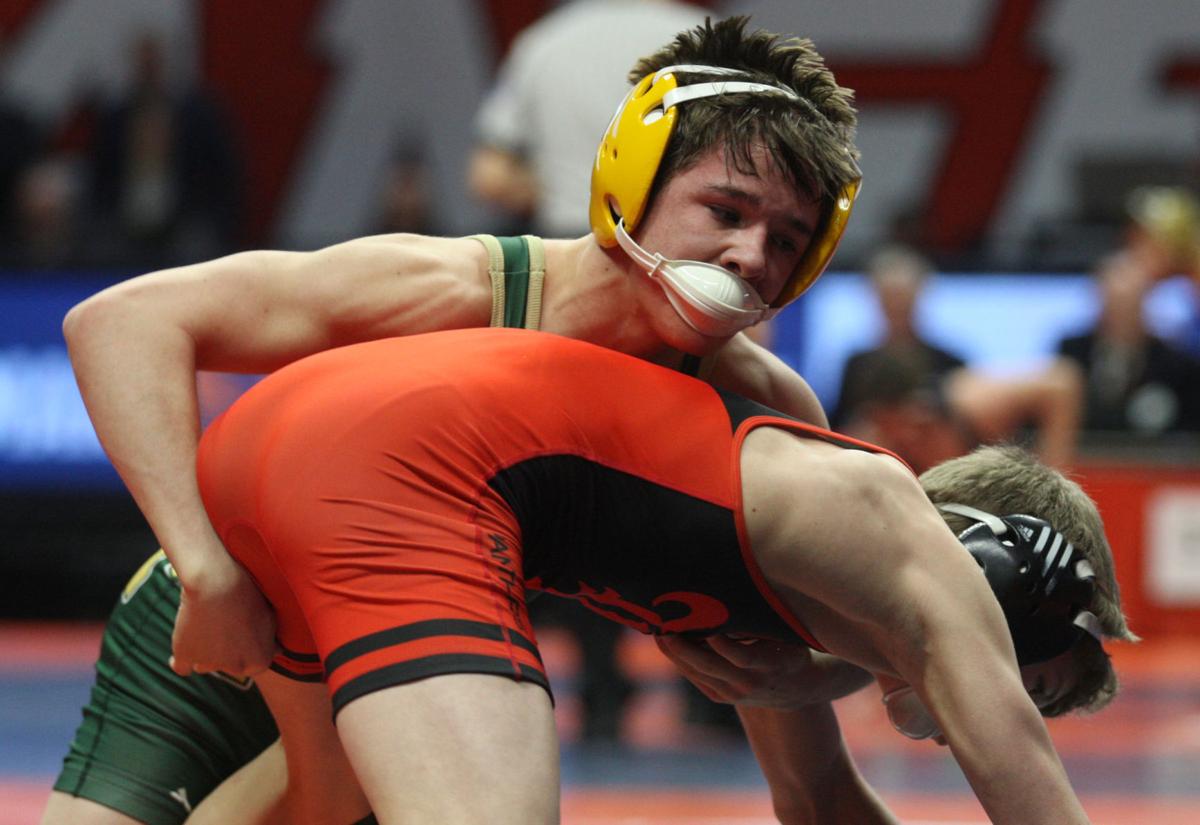 CHAMPAIGN -- Trevor Edwards is clearly on a mission.

Edwards, who is looking to become the first wrestler in Mattoon history to win an individual state title today, blew past his two opponents on Friday in the Class 2A 113-pound weight class at the IHSA state wrestling tournament.

First it was 11th-ranked Rafael Munoz.

Edwards quickly dispatched Munoz with a 17-1 tech fall early in the second period.

He then controlled the semifinal match against sixth-ranked Zack Hulet for a 9-3 decision to become only the second wrestler in Mattoon’s history to reach the state championship bout.

“It’s definitely a big deal for me, I’ve been trying to do this since I was 7 years old,” Edwards said. “This is the dream every wrestler has. I am just happy that I am able to fulfill it this year, especially my senior year. I am really glad I got it done, but I have one more still.”

Mike Stanley is the only other Green Wave wrestler to compete in the state title match. He finished as the runner-up at 125 pounds in the 1998-1999 season.

Edwards faces Joe Arroyo, who is ranked one spot below Edwards, for the state title tonight at the State Farm Center.

“I am extremely confident, always,” Edwards said. “You go into every match thinking you are going to win it. I’m the best, that’s what you have to think in every match. Definitely I am thinking I can win this.”

Winter first ousted Byron's Brandon Elsbury 7-3 and then nudged by Isaac Lyzenga of Lansing Illiana Christian 4-2 after a reversal in the semifinal round.

"It's fun, but not a lot of kids can keep me down, especially when I start scrambling," Winter said. "I am a great scrambler. I love doing it, I have fun doing it."

Clinton hasn't had a wrestler make a championship appearance since Kye Reczek in 2013.

Winter, who took fifth place in 2015 but missed the tournament in 2016, will be the first Maroon to make a championship appearance since Kye Reczek took runner-up in 2013.

"It means so much and my hard work is starting to pay off," he said. "It's not there yet. I still have to work, I still have to focus, but it's so much better to be there and have a whole day to prepare for it."

Mattoon’s Garrette Branson came into the state tournament undefeated and the top-seed at 220 pounds in 2A and faced 10th-ranked Scott Sierzega of Brother Rice in the quarterfinal.

Sierzega, who only had three losses on the season, stayed with Branson throughout regulation as the two were tied at 2-2. Neither one had a decent shot in sudden victory, sending the match to overtime.

Sierzega rode out Branson for 30 seconds in the first overtime and Branson was unable to do the same. Sierzega scored a reversal to upset Branson 7-2.

“With those two kids, it could’ve gone either way at any point in time,” Mattoon coach Brett Porter said. “He fell short; he didn’t get the job done. Now he has to get his act together, win two matches and he’s an All-State wrestler. That’s a step up from what he did last year.”

Branson had a chip on his shoulder in the consolation round and quickly went up 5-0. He went into the second period up 10-0 before getting the pin in 2:42 to stay alive.

Shelbyville junior Clayton Peterson faced third-ranked Zach Haley in the quarterfinals at 138 pounds in Class 1A. He pushed Haley as best as he could, but got knocked into the wrestlebacks with a 5-3 loss.

Last season Peterson bowed out before Saturday, but he controlled his wrestleback against Omar Otero for a 6-1 decision to stay alive in the tournament.

“I am still alive and I knew, going into Haley’s match, he’s a good rider so I knew I had to get the first takedown and that didn’t happen so I just tried to wrestle my best,” Peterson said. “I am here to medal. I am here to do something. I controlled (my wrestleback). Even though it’s less points than I wanted, I controlled it. I am still alive and still here to wrestle.”

Charleston’s Quinten Carver had a tight match against Dominick Murphy in the 2A wrestlebacks at 152 pounds. The two were tied at 2-2 going into the third when Carver scored a reversal to get an advantage. Carver held off Murphy for a 6-4 win.

“He was pretty strong and we were about even, but I just kept moving and circling,” Carver said. “Every wrestler that doesn’t stop moving wins. Since it’s my first year here … it feels pretty great.”

Cumberland’s Konnir Hinz was close to advancing to the 1A 145-pound semifinals with a 3-0 lead going into the third period against Daniel Jezik, but he was called for two stalls in the final period and Jezik scored a takedown and pulled out a 5-4 decision.

Hinz stayed alive with an injury default win in his first wrestleback.

Mattoon’s Trevor Edwards reacts after defeating Washington’s Zeke Hulet in the Class 2A 113-pound semifinal to advance to the state championship match at the State Farm Center on Friday.