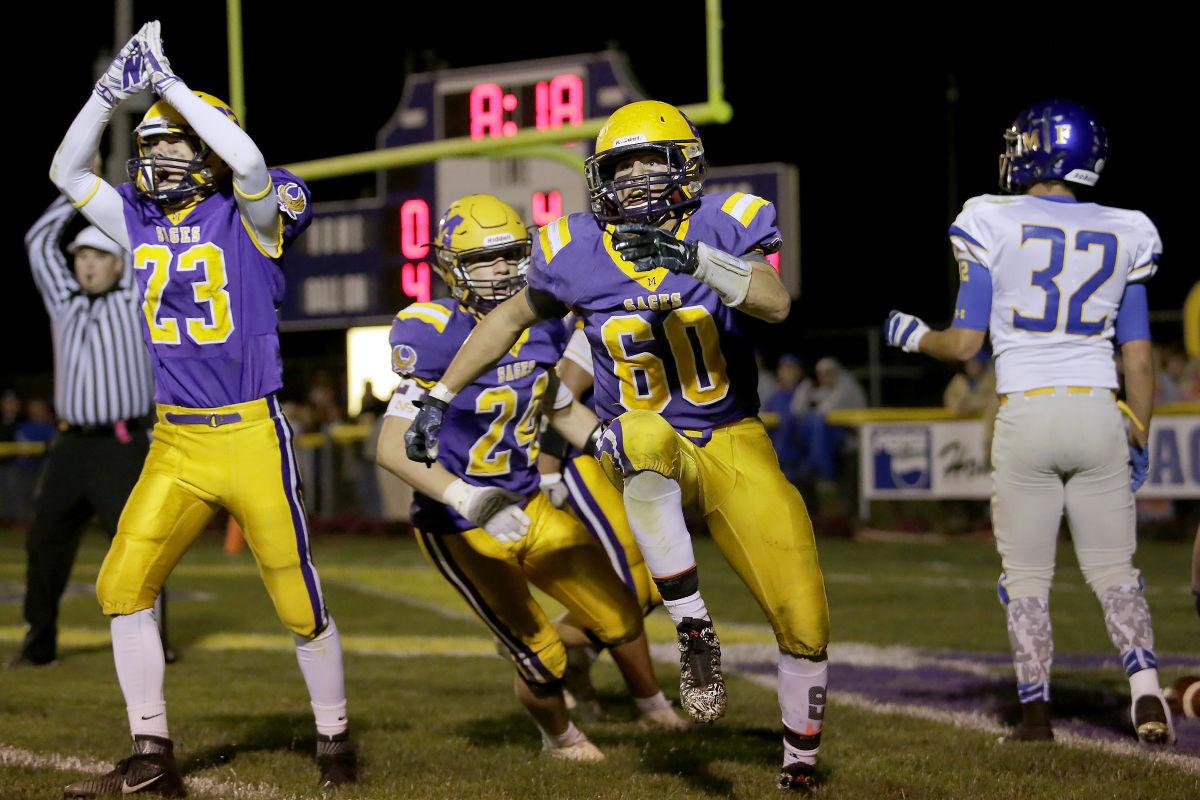 Monticello defenders celebrate after a safety against Maroa-Forsyth during the second half of Friday's game in Monticello. Monticello won the game 9-6. 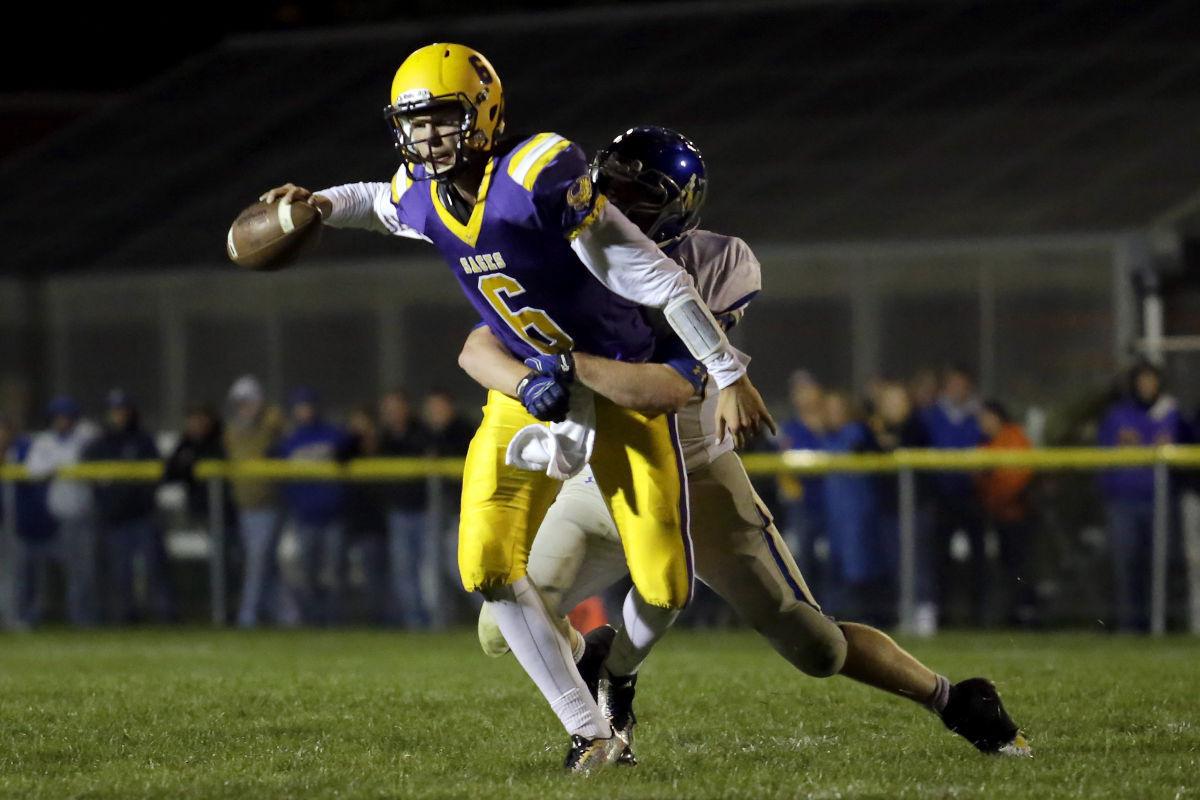 Monticello's Brandon Wildman tries to protect the ball from the reach of Maroa-Forsyth's Logan Allsup during the second half of the homecoming game. 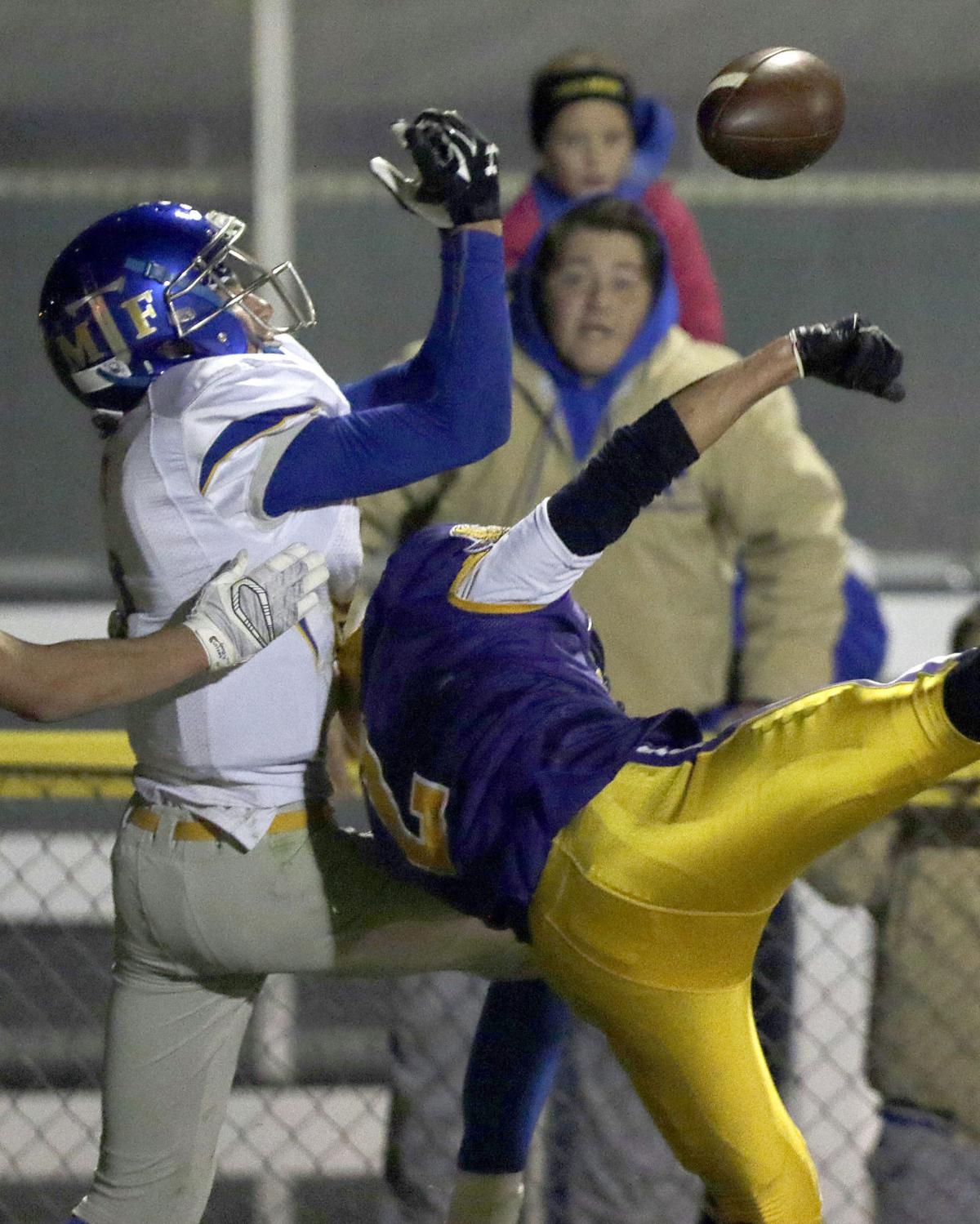 Nathan Harman blitzed untouched through the right side of the Maroa-Forsyth offensive line and sacked Logan Allsup in the end zone for a safety with less than nine minutes to play.

Jacob Burton caught three passes, including a touchdown, on the ensuing drive to give the Sages their first lead, and then their defense had to go back to what it did all night.

The Sages stopped Maroa one more time – Burton intercepting a fourth-down pass by Kameron Boline on the goal line – and they secured a 9-6 win Friday.

A fourth-down offensive play may have set the table for Harman's defensive play.

Trailing 6-0, Monticello started a drive at the 4-yard line with 2:50 to play in the third quarter. The Sages ran 18 plays and faced a 4th-and-goal from the 19-yard line.

Brandon Wildman completed a pass 14 yards to Burton to the 5-yard line. It was a turnover on downs for the Sages, but it pinned the Trojans deep.

Maroa's Deondre Gregory lost a yard on Maroa's first play, and then came the safety.

Logan Allsup lined up at quarterback for the Trojans, although the position was mostly manned by Boline in the absence of Tyler Ray, who will miss the rest of the season with a knee injury.

The Trojans ran a quarterback read play and Allsup kept the ball but was met immediately by Boline.

“It was a slow play, probably a bad call by me,” Maroa coach Josh Jostes said.

“That turned the game around huge,” Burton said. “That was a big momentum swing.”

The Sages took the ensuing kickoff into Maroa territory and knew it was time to break through.

“We knew if we were going to score, we had to do it then,” Burton said.

“It would've been demoralizing at that point if we didn't put that in,” Welter said.

Wildman needed only four plays from the 47-yard line – completions of 22, 6 and 19 yards to Burton – to get into the endzone and put the game back on his defenses shoulders.

The Trojans converted two 3rd-and-long plays and a 4th-and-10 to put them within striking distance.

After a 10-yard completion to Chad Howell extended the drive on fourth down, Boline threw a pass that was a sure interception but dropped by Sutten Winterbottom.

He smacked the ground multiple times after the play, but Burton's pick saved him five plays later.

“They're definitely the catalyst of this team right now,” Wildman said of the defense. “Our offense is getting back to where it needs to be, but that defense is playing great.”

Welter wanted to be patient on offense and run the ball, and his defense afforded him a half to do it.

But after putting up miniscule results in the first half and trailing 6-0, the Sages started throwing the ball around the yard like they've been known to do.

“We thought, last night at practice, the best we looked was when we got in the gun and made quick passes. We thought our best chance was getting it out there before they could get to our quarterback,” Welter said. “We kind of decided we were going to roll with the quick passing game.”

Call of the night

After two rushes by Howell failed to punch it in, Maroa tried a quarterback sneak behind Allsup. Monticello stuffed it, forcing 4th-and-1.

The Trojans were penalized for a false start and had fourth down from the 6 with three seconds left.

Howell started a run out wide to the right, but waited to make a move until Monticello bit on the play. The play called was a halfback pass and Howell found Barrett alone in the endzone for a 6-0 lead.

Monticello tried the same trick on its first play of the game, but Trae Hise batted the pass down.

Monticello defenders celebrate after a safety against Maroa-Forsyth during the second half of Friday's game in Monticello. Monticello won the game 9-6.

Monticello's Brandon Wildman tries to protect the ball from the reach of Maroa-Forsyth's Logan Allsup during the second half of the homecoming game.