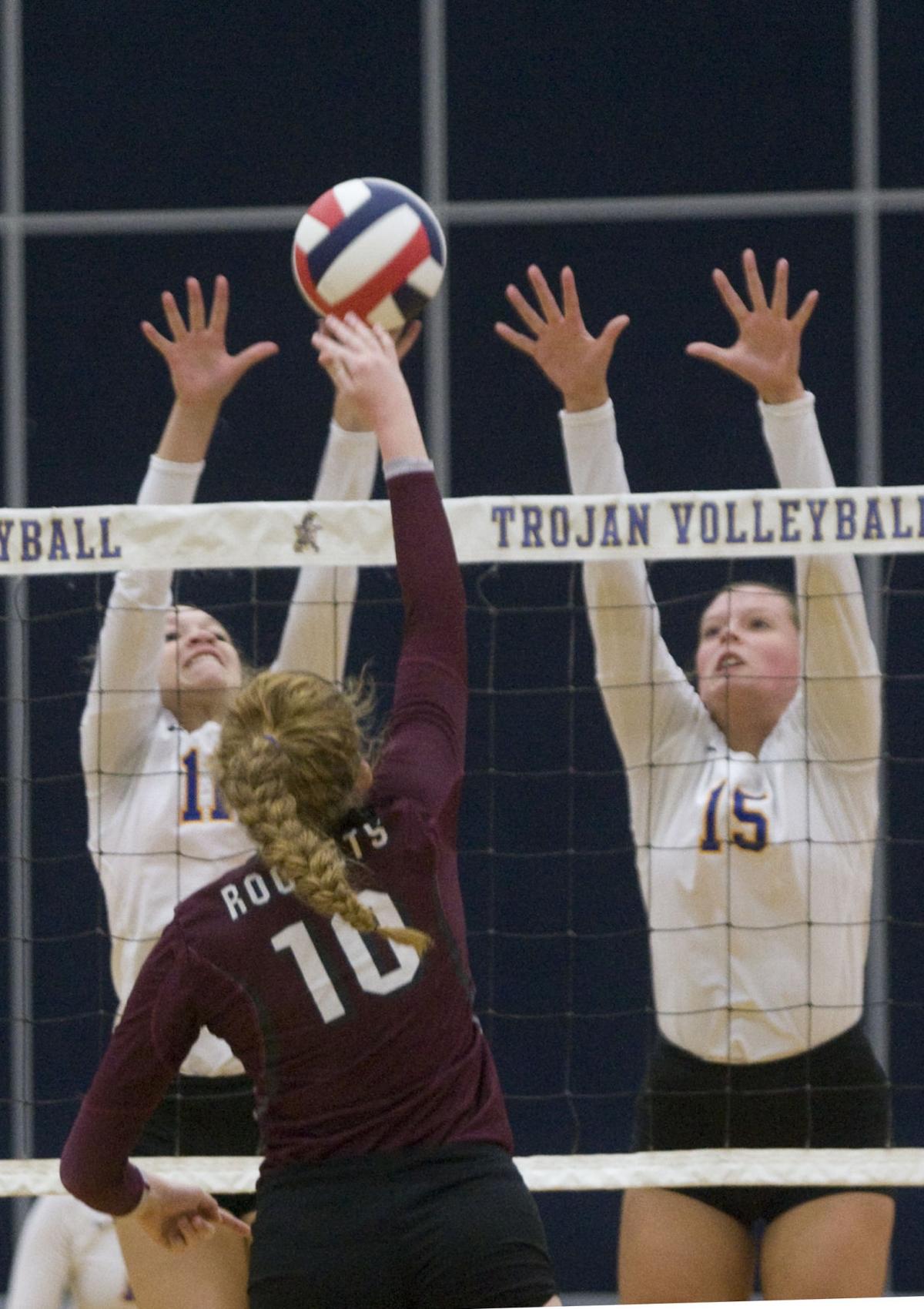 Casey Cooper and Savanah Sparks guard the net for Maroa-Forsyth during Tuesday's match with Tolono Unity. Online gallery at herald-review.com/gallery 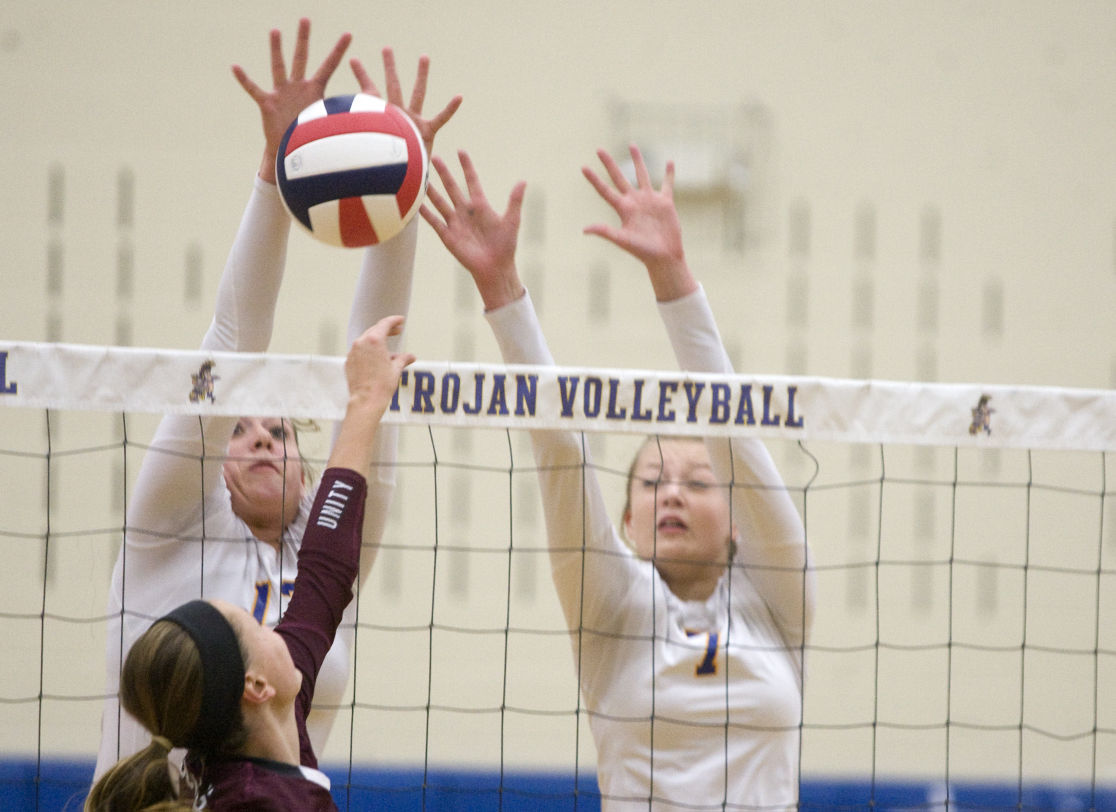 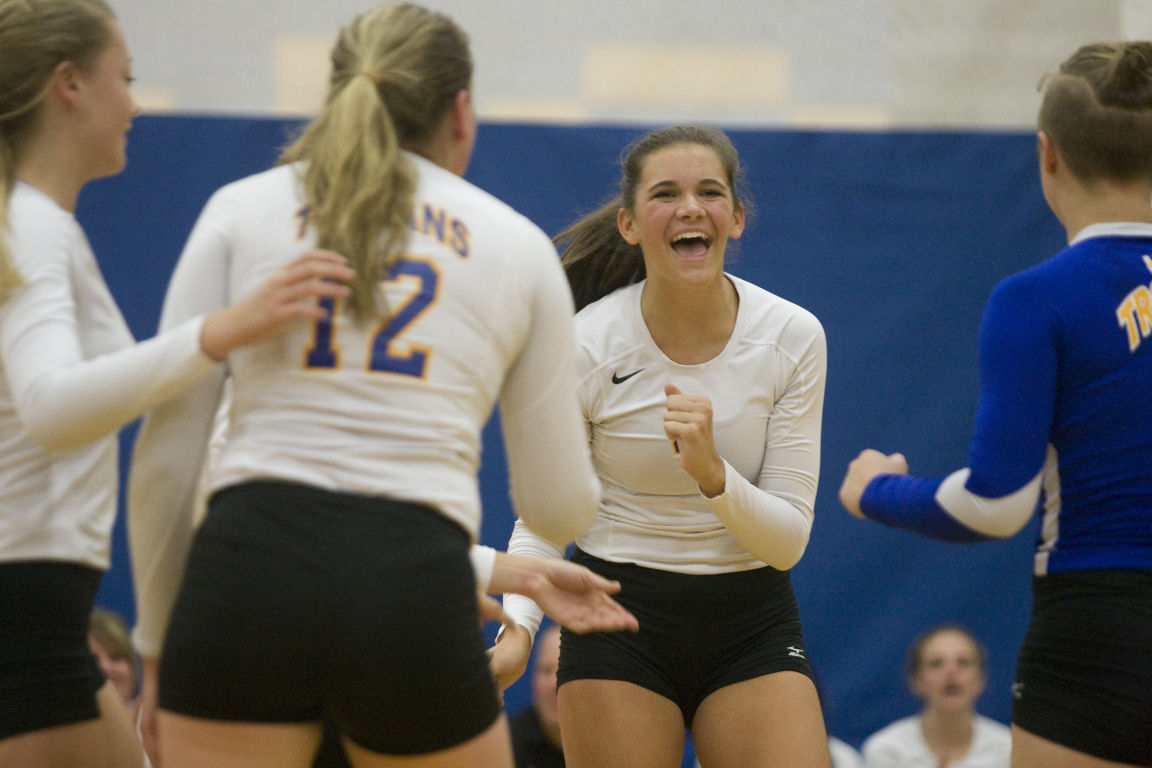 Carly Mason and her teammates celebrate another point on Tuesday night.

MAROA -- Seven different players recorded kills for Maroa-Forsyth in its 25-22, 25-16 win against Tolono Unity on Tuesday.

But whenever the Trojans got into any trouble, the answer was Kylie Rudsinski.

Maroa (11-2, 2-1 Okaw Valley Conference) has spent its first season under coach Sarah Mason trying to put together an offense to go along with Rudsinski, and several players have emerged. Junior Savana Sparks, sophomore Carly Mason, senior transfer Casey Cooper, freshman Reese Bobitt and even three-year starting setter Kira Jackson have pitched in to provide punch at the net.

"She's the type of player who can take over a match," Sarah Mason said. "The only way she can do that is with good passing and good setting, but when Kylie gets that, she can do the things that need done to get the win."

Rudsinski also made her impact at the service line, using an intimidating jump serve to record three aces. It begins with her throwing the ball high in the air, which gives the ball significant top spin.

"You never know where it's going to go and using that top spin makes it fall, so they think it's going out and it drops in," Mason said.

Down 21-20 in the first game, Bobitt had a kill, followed by a Rudsinski kill to give Maroa the lead. Bobitt finished off game one with another of her three kills.

"She's been improving every match," Sarah Mason said of Bobitt. "We've worked a lot in practice on timing with our middles, and you can tell. It's paying off."

Jackson, who had 12 assists, three kills and 10 digs, said it's important for Maroa to have help for Rudsinski going forward.

"It's nice to be able to switch it up when we need to," Jackson said. "We have a lot of good hitters."

Casey Cooper and Savanah Sparks guard the net for Maroa-Forsyth during Tuesday's match with Tolono Unity. Online gallery at herald-review.com/gallery

Carly Mason and her teammates celebrate another point on Tuesday night.