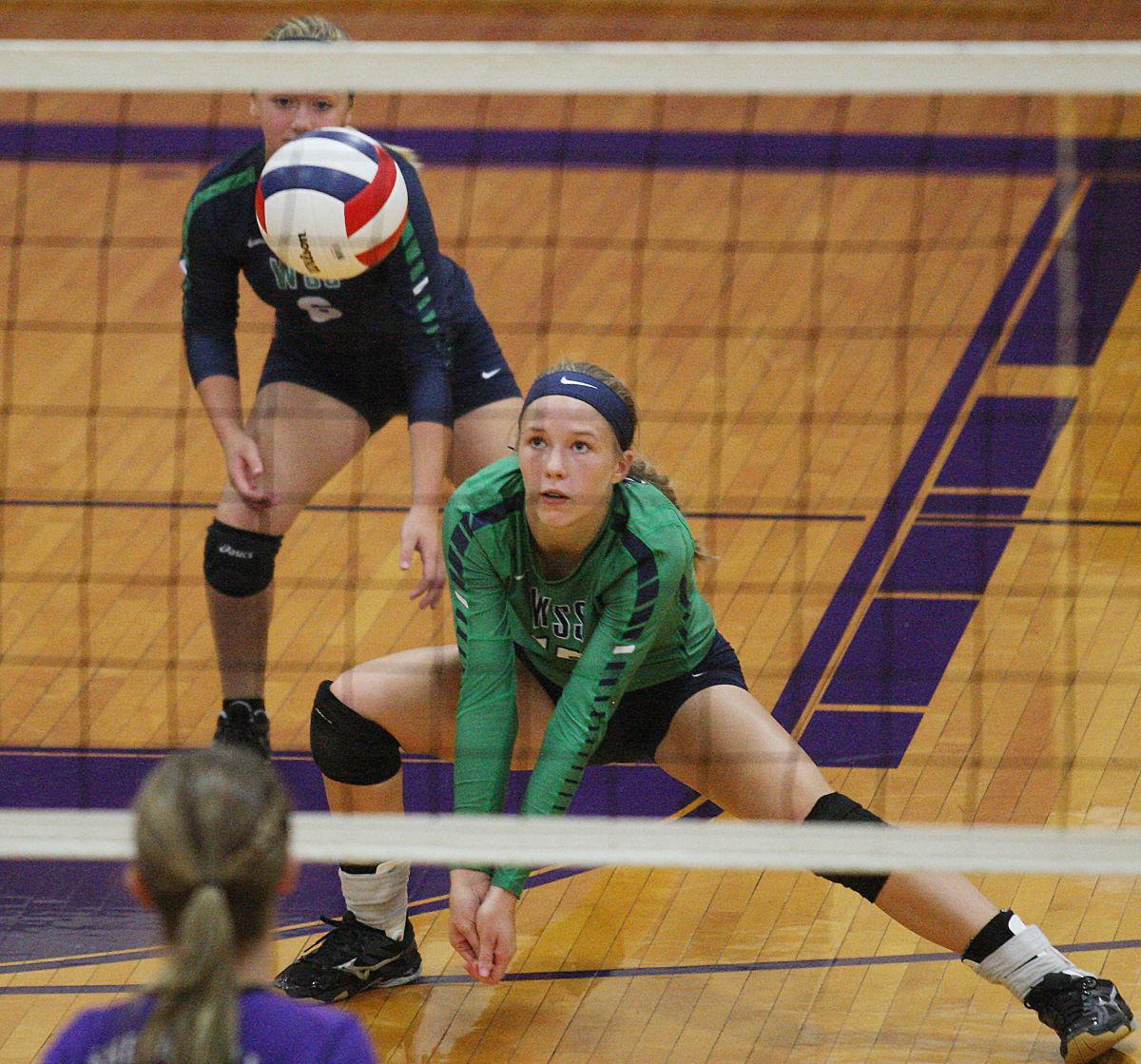 Windsor/Stewardson-Strasburg’s Autumn Bennett prepares for the dig against Shelbyville as teammate Carson Cole backs her up at Shelbyville on Monday. Online gallery at herald-review.com/gallery 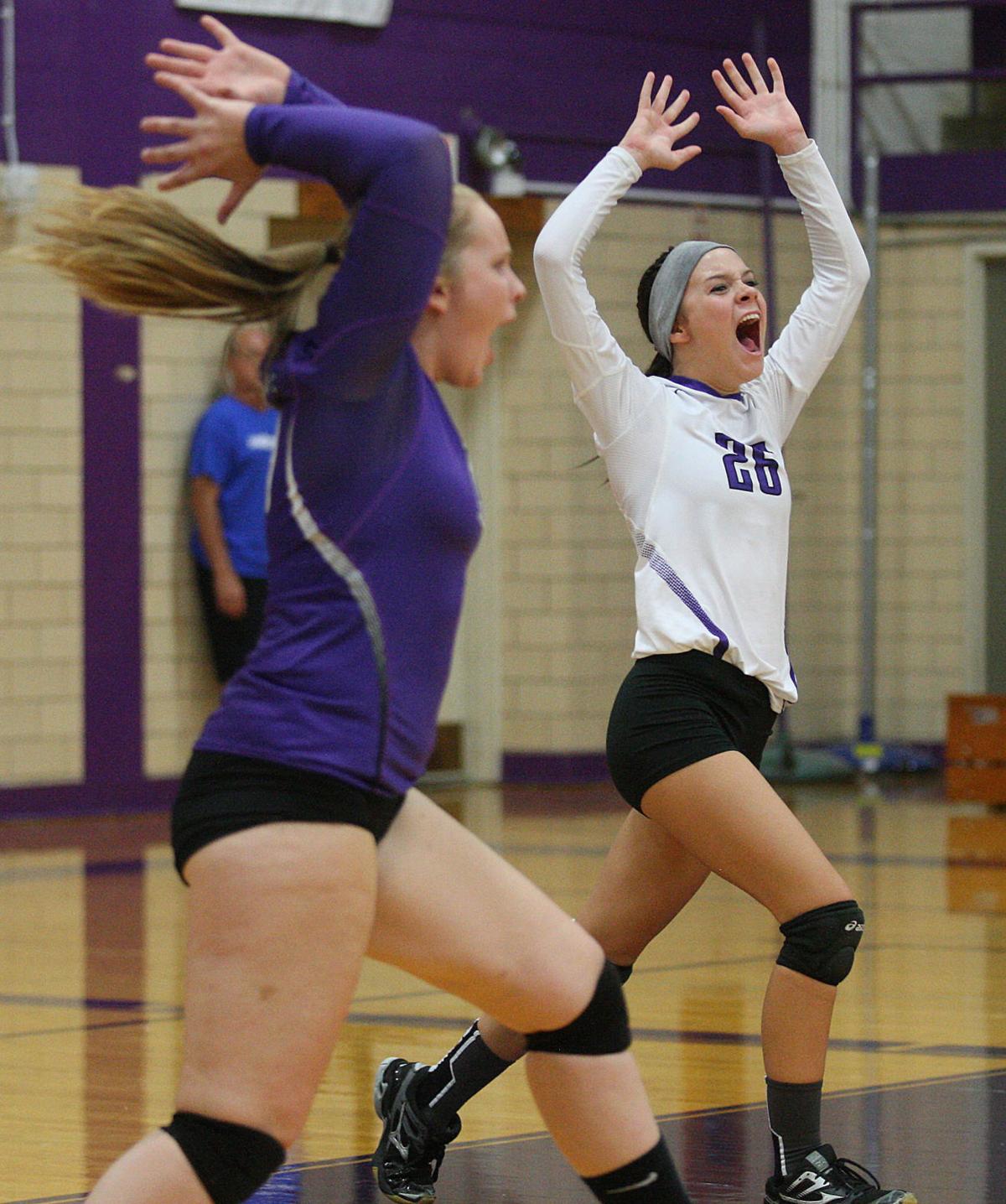 Shelbyville’s Caylee Wheeler, left, and Blair Johnston celebrate the team winning the second game of the match against Windsor/Stewardson-Strasburg on Monday. Online gallery at herald-review.com/gallery

SHELBYVILLE – Maybe they reached the point they were sure the match was theirs. Maybe they really thought the third set only went to 15.

Whatever the reason, Shelbyville celebrated twice.

The Rams rallied from an early deficit in the third set Monday to reach a 7-all tie, then stretched it into a 15-9 lead at which point their bench cleared, they celebrated and started lining up for handshakes.

“That was embarrassing,” Shelbyville senior Courtney Williams said, covering her face with her hands. “We thought since we thought we won at 15, we might as well win at 25.

“Because it'd be pretty embarrassing if we didn't.”

The Rams (19-0) avoided the let down and stayed undefeated this season, surviving what looked and felt like their biggest game to date. Both Shelby County schools brought student sections.

“I had no idea what they were thinking,” Peifer said of the early celebration. “They were so excited I guess. There were a lot of people here – by far the most we've had.”

Williams said Monday was the first time the student section sounded really excited to be there.

“We're getting too much attention,” Williams quipped.

“Everyone was talking about it, and so we were like, 'This is really big. Really big.' ” Rams senior Hannah Koonce said. “Too much pressure.”

In the first set, Shelbyville looked rattled by the pressure.

W/SS served deep, which neutralized the Rams' power hitters and kept them from getting into a comfort zone on offense. The Hatchets took the set 25-20.

But the Rams served to start the second set and got rolling. They jumped out to a 10-1 lead and won 25-12. W/SS only won three points on its own serve.

“I had a different team out there on set two,” Schlechte said. “It just goes to show we have a lot of young ones on the floor. We just seemed out of sorts in two and three. If we could've played like we did the first set the entire night ...”

The Hatchets (10-4) continued to be without junior setter Becca Schlechte, who's recovering from a concussion.

Although they didn't miss a beat without Schlechte in the first set, Shelbyville started to take advantage of the Hatchets' missing star in the next two sets. The Rams benefited from the Hatchets' inconsistent setting and lapses in communication – mostly, self-inflicted wounds.

Schlechte said there's no timetable for Becca's return, only that she needs to go two-to-three days without headaches.

Sydney Miller and Ryann Ambrose had seven kills apiece for the Rams, Maddie Holland added six kills and five blocks, and the Rams's offense imposed its will as the team got more comfortable.

Even facing a third-set deficit, the Rams stayed composed and rallied back.

“The biggest difference was the experience us versus them,” Peifer said. “They're so young – so young.

“They're going to just be killing everybody around here before too much longer, but we had the experience and took them out of their element a little bit.”

Windsor/Stewardson-Strasburg’s Autumn Bennett prepares for the dig against Shelbyville as teammate Carson Cole backs her up at Shelbyville on Monday. Online gallery at herald-review.com/gallery

Shelbyville’s Caylee Wheeler, left, and Blair Johnston celebrate the team winning the second game of the match against Windsor/Stewardson-Strasburg on Monday. Online gallery at herald-review.com/gallery