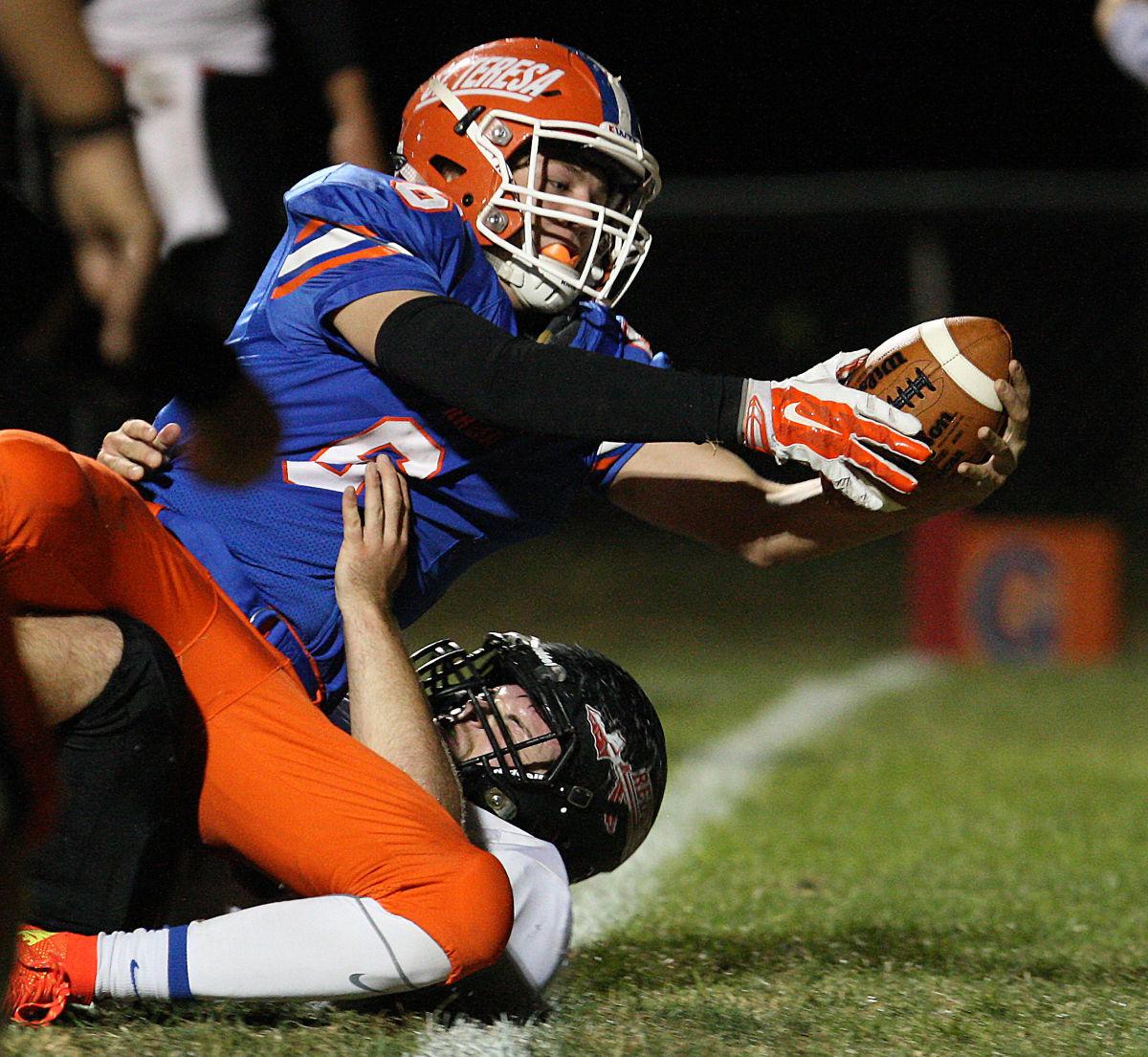 St Teresa quarterback Ryan Fyke stretches over the goal line for a touchdown in the second quarter against Sullivan-Okaw Valley on Friday night. Online gallery at herald-review.com/gallery 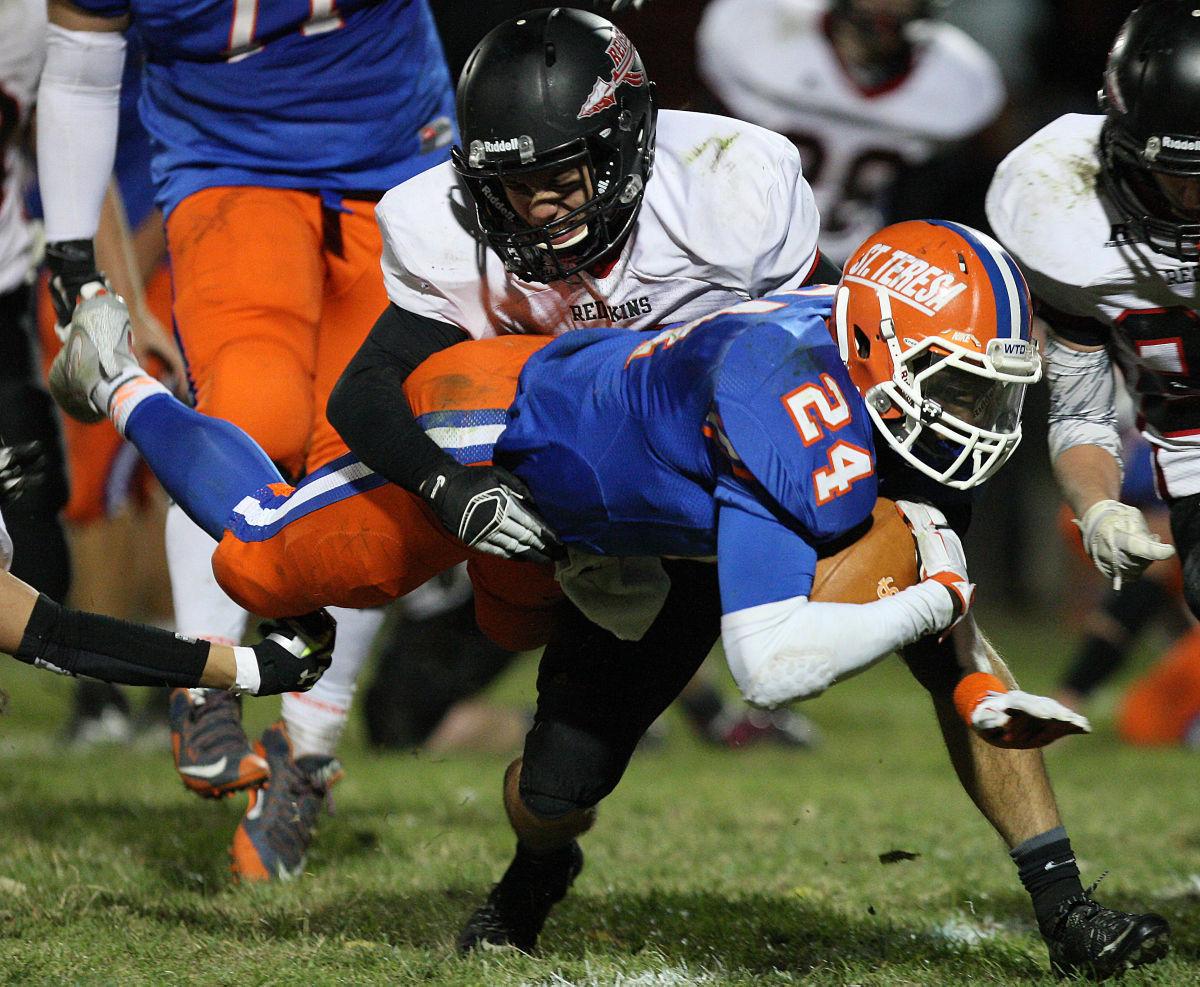 But as the team has grown up, the rise has also coincided with the emergence of Decatur's youngest star -- freshman running back Jacardia Wright.

The St. Teresa sensation rushed for 244 yards and two touchdowns on 24 carries as the Bulldogs beat Sullivan-Okaw Valley 42-14 for their fourth straight win.

It's the most prolific performance from Wright, and it's his fourth straight game with 100-plus yards rushing.

"He's a talented player and it's hard to get yards on this team," Brilley said. "You have to earn everything that you get. Our O-line did a good job. He did a great job making some plays, he's just a very talented kid who's learning."

Wright had seven carries for more than 10 yards and smashed through arm tackle after arm tackle.

And as he's continued to rise to the top of defensive coordinator's gameplans, he's made an accurate passing game from Fyke that much more dangerous.

On the Bulldogs' (4-2) opening drive, they started with eight straight runs before Fyke capped off the drive with a play-action pass that all of SOV (4-2) bit on, leaving Seth Greenwell wide open in the end zone. It was a play that Fyke ran multiple times, including on another score to Chris Hein.

It's becoming an almost impossible puzzle to solve -- do you load the box against a 190-pound freshman sensation or do you pull back your linebackers to stop an accurate Fyke?

"Teams see us running and try to stop the run game by pulling linebackers -- that leaves the flat open, and it's wide open," Hein said. "We just connect on it."

That passing game kept improving as Fyke finished with 11-for-14 for 141 yards and two touchdowns. While Fyke didn't show the deep ball as much as last year, he doesn't need to with the leads St. T has held.

"No. 1, he's just really, really accurate, honestly, and our kids are catching the ball consistently," Brilley said. "I think the thing is, he's really focusing on the details and the fundamentals, and he's understanding those are really important."

After St. T built an early lead, though, SOV nearly erased it all in the second quarter. Jake Eaton took in a score with eight minutes left in the half and Alec Ballinger took back a 95-yard punt return two minutes later. In the half's final moments, they forced they way down to the 7-yard line before they missing a field goal try.

Coming out of the half, SOV took its first drive down to the 6-yard line before a fake field goal attempt was chased away.

St. Teresa responded by driving 97 yards the opposite direction.

"I'm very, very proud of how we immediately responded and went right back down and scored," Brilley said. "That says a lot about the character of our team. You know a year ago, we had a lot of immaturity, and a lot of adversity would hold us back. But we went right after it."

After all the excitement of being in 1A, St. T looked like a shaky contender after three weeks.

But now with big wins against Clinton and SOV, the Bulldogs are starting to look like that preseason ranked team. Wright certainly has helped steady the offense, but the defense has allowed just 28 points in the past three games.

Maybe, losing those two out of the gate might have been a good thing,

"Honestly, if we would have started the season like this, we should be 6-0. The team's really grown up really, we're more ready to play," Fyke said. "And everybody wants it a lot more. Everybody's pretty upset after we went 0-2, because we were supposed to have a great season."

"It sparked us to play harder, and with more energy," Hein added.

SOV's been able to put up similar numbers to last year's playoff team, even after a large senior class left. But against Tuscola and now St. Teresa, a lack of depth has started to show.

"They controlled the ball on us all night," Sullivan coach Gerald Temples said. "Offensively, the took the ball and crammed it down our throat. We got maybe, what, two stops all night?

"Physically, we just got whipped."

There's plenty of hype around Wright, and that'll only heighten after Friday night. But he let a fumble slip out of his grip late in the fourth quarter, and that didn't escape Fyke's eyes.

"I just want to remind everybody, he's still a freshman. And he did make a freshman mistake," Fyke said. "He's still learning, but I'm hard on him. I'm hard on everybody. We just keep on him so he doesn't ever give up."

St Teresa quarterback Ryan Fyke stretches over the goal line for a touchdown in the second quarter against Sullivan-Okaw Valley on Friday night. Online gallery at herald-review.com/gallery