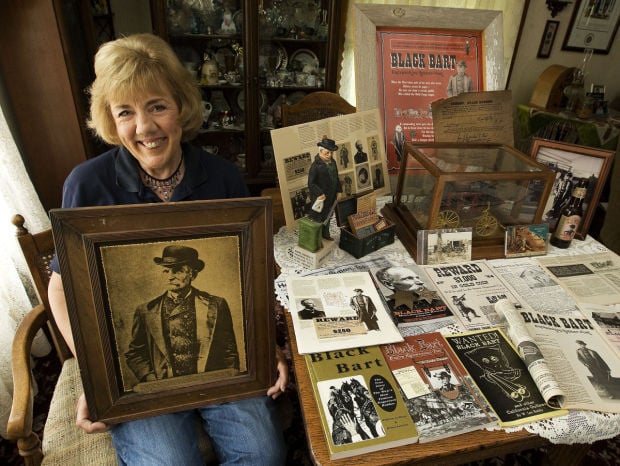 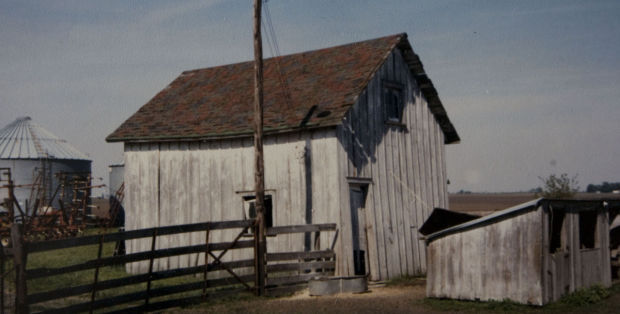 Black Bart lived in the pictured building on Lynch’s property. The building has since been torn down. 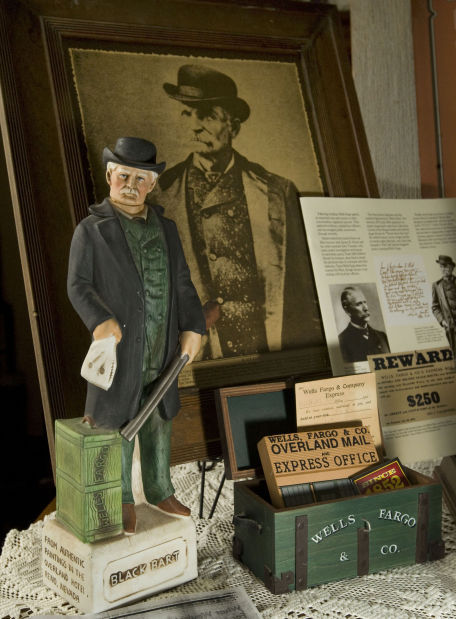 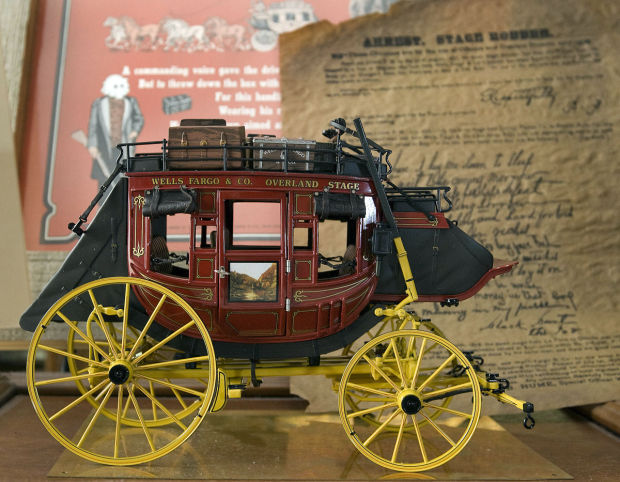 FORSYTH — Nowadays the words Black Bart are associated with a pumpkin patch near Warrensburg. Did you know Black Bart was an infamous Old West outlaw from Hickory Point Township?

There are many collectors of Black Bart memorabilia, including Sandra Lynch. Her Lynch Farm, one-half mile north of Forsyth, is located where Black Bart lived the longest in Macon County.

She has five books, magazine articles, posters, pictures of this fascinating fellow, some of which she collected during visits to the Wells Fargo Museum in San Francisco. Original Black Bart items are rare. Two signatures from Civil War documents have been offered on eBay for $10,000.

Born in England in 1829 in a family of 10 children, Black Bart came to the United States at age 2. He went to California in 1849 to hunt for gold. He went again in 1852 with two of his brothers, both of whom died. It was said Black Bart had wanderlust, he was always on the move, eventually to Macon County.

Settling down at last, he married Mary Elizabeth Johnson in 1854 and became a farmer. He lived in three different locations in Macon County, two near Forsyth and also at the site of the Lewis Disbrow farm, the original Black Bart Pumpkin Patch.

From the Lynch Farm location he departed with the Illinois 116th Volunteer Infantry Regiment during the Civil War to fight for the North. He was wounded four times, surviving an often fatal stomach wound.

His name, Charles E. Boles, is listed on the Civil War Monument in Fairview Park, Decatur, and on the Veterans Memorial in Forsyth Park. Each of the houses he lived in during his Macon County days has been torn down.

After the war, afraid of horses and smitten with the lust for gold, he again became a prospector in Idaho and Montana and it was said he had a working mine. There was a dispute with a prospective buyer and with Wells Fargo and Black Bart wrote a letter to his family saying he was going to “get even.”

And, as the story goes, he became a robber, known as the “Gentleman Bandit.”

He pulled off his first robbery on July 28, 1875, in Calaveras County, northern California, dressed in a duster and with a flour sack over his head. He stood in the road with a rifle, stopped the stage coach and grabbed the strong box of money.

He didn’t take money from the passengers, he never did. He sometimes left a bit of homespun poetry in the strong box.

Afraid of horses, he walked to the site of each robbery. Wells Fargo assigned a detective, James Hume, to catch him. He didn’t.

Black Bart’s last robbery was at the same site as the first. A teenage boy, Johnny Rolleri, had hitched a ride with the Sonora-Milton stage coach in order to go hunting. He had a rifle and took a shot at Black Bart.

In his haste to escape, Black Bart dropped a hankerchief, The laundry nark was traced to a San Francisco Chinese laundry and Black Bart was captured.

His arrest report identified him as 5 feet 5, in excellent health, several scars, including abdomen. He was sentenced to San Quentin prison in California for six years.

He disappeared. What happened to him? Nobody knows. There were reports that he robbed again, that he had fled to Montana, Nevada, even Japan.

A 1917 New York obituary reported the death of Charles Boles, age 88. Was it Black Bart?

Watch now: At Mount Zion breakfast, a lesson in keeping the faith

Mount Zion Chamber of Commerce's annual prayer breakfast on Wednesday featured keynote speaker Becky Anderson, who spoke of her daughter Shoni's battle with leukemia and how faith has helped them.

DEAR DR. ROACH: About 15 years ago I was diagnosed with Type 2 diabetes, and began years of increasing numbers of medications and higher doses…

I have a treat for you today: A recipe for classic butternut squash soup that is ridiculously quick and easy. Easy on the wallet, too. Thick, …

Doctor turns patient: For years he helped people recover from strokes, then he had one.

Coming in as a patient through the doors he’d so often entered as chief medical officer "was a completely different perspective" for this Illinois doctor.

Dear Abby: I recently attended a funeral with my mother's family. While I was visiting, one of my aunts confided that my mother cheated on my …

DEAR DR ROACH: I am a 70-year-old man in good health. I have had regular colonoscopies since my 50s, but I wonder about the wisdom of a colono…

Dear Abby: My son and daughter-in-law went through a lot to have a baby, but she had a miracle child in her 40s. The boy is now 12. The proble…

Question: I usually get my benefit payment on the third of the month. But what if the third falls on a Saturday, Sunday, or holiday? Will my p…

Keeping your jack-o’-lantern fresh through Halloween

Drinking habits to avoid for a healthier heart

Drinking habits to avoid for a healthier heart

Times when it's best to use a debit card

Times when it's best to use a debit card

Black Bart lived in the pictured building on Lynch’s property. The building has since been torn down.