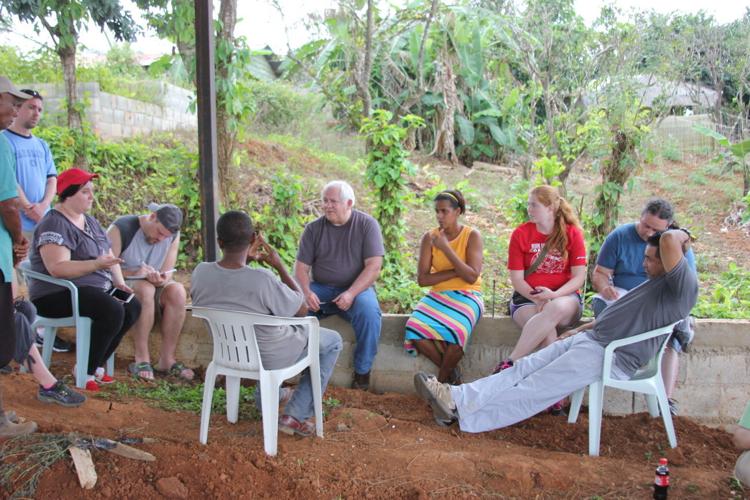 Millikin University representatives interview officials of El Mango Limpio in January. At left is Jason Tolly (standing and wearing blue) and others seated on the low wall from left are Heath Goad, Larry Stapleton, the local pastor's wife, Kayla Buchen and Jason Frazier. 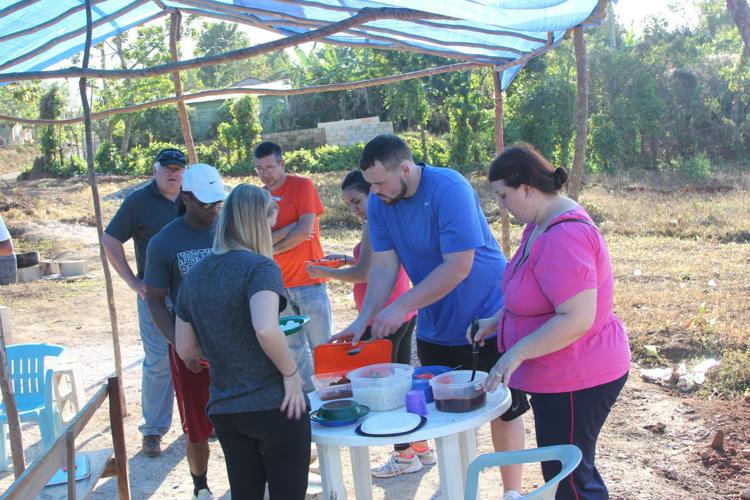 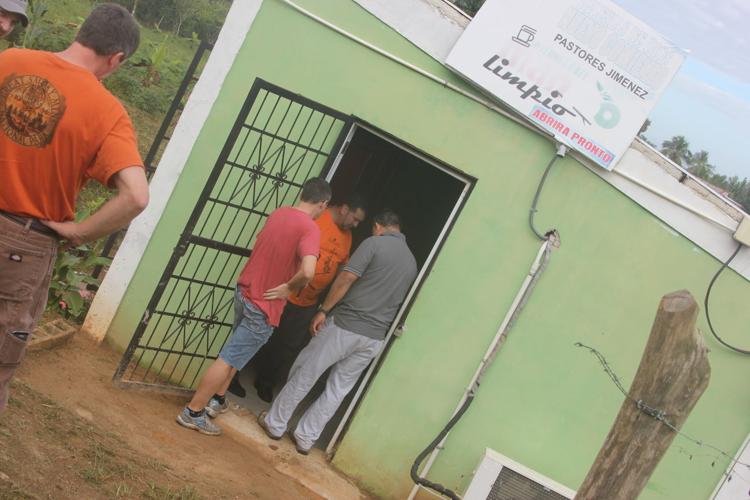 The exterior of the village's internet cafe as it appeared while the building was being wired.

DECATUR – People who do mission work mean well, but sometimes lack the expertise to do a project right.

A partnership between New Beginnings Church of God and students of Larry Stapleton, associate professor of business at Millikin University, should eliminate that possibility as the church continues efforts it began in 2012 to make the tiny village of El Mango Limpio in the Domican Republic a better place to live.

After planting a church, New Beginnings decided to erect an Internet Cafe about 50 yards away and relied on Stapleton's students from his Doing Business in the Dominican Republic Class in the fall of 2014 to come up with a way to make it work.

Stapleton has been teaching the class and taking students to the Dominican Republic to work on projects since the 2010-11 academic year.

The Rev. Dan Watkins, a 1989 graduate of Millikin and associate pastor of New Beginnings, said before the cafe began operating in March, schoolchildren had to take a bus down the mountain to Hato Mayor del Rey 15 kilometers away to do their homework. “They were spending hours on this every day,”he said.

In January, four of the 14 students who came with Stapleton to the Dominican Republic as part of the fall 2015 class went to the village to study how water, education and health care might be improved.

Jason Frazier of Decatur, now a graduate student at Millikin, concluded that the village's well water could initially be cleaned and sold to cover the cost of a filtration system and that down the road another well could be dug.

“We did not tell the people of the village what to do,” he said. “We worked with them on what they wanted to do.”

Kayla Buchen, a senior business management major from Decatur, worked on a healthcare plan by interviewing two women from the village who are studying to become nurses and getting their input.

“We'd like to start out with health and hygiene classes and eventually have an herb garden, but more water is needed for that,” she said.

Buchen added that she loved the chance to go to the Dominican Republic and work on something that would provide real benefits.

“It took us out of the everyday college experience,” she said. “This was so much more than just a class.”

Stapleton said this semester students in his Project Management class have been making the business plans developed by the two earlier classes more definitive with detailed timelines and costs.

“At Millikin, we like to get students out of their comfort zone and solving real-world problems,” he said.

Watkins, who has a degree in business, is impressed with their work.

“Most churches don't have the funds to investigate a project and do a business plan,” he said. “We don't want to just throw dollars at Third-World problems; we want to change the course of people's lives.”

DECATUR – Lydia Burke has experienced the perks of fame.

DECATUR – Mary Jane Linton wore a wool cape like nursing students would have once thrown on to walk across campus from the former William C. J…

Recovering from lack of sleep takes longer than you think

Recovering from lack of sleep takes longer than you think

Millikin University representatives interview officials of El Mango Limpio in January. At left is Jason Tolly (standing and wearing blue) and others seated on the low wall from left are Heath Goad, Larry Stapleton, the local pastor's wife, Kayla Buchen and Jason Frazier.

The exterior of the village's internet cafe as it appeared while the building was being wired.