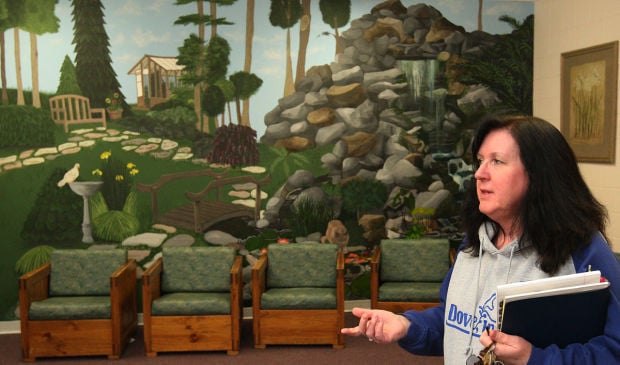 Director of Volunteers and Community Relations Barb Blakey shows a lounge where volunteers sometimes interact with clients at Dove Inc. 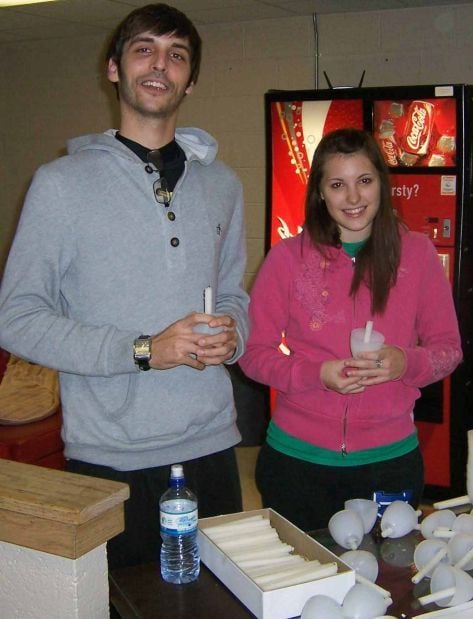 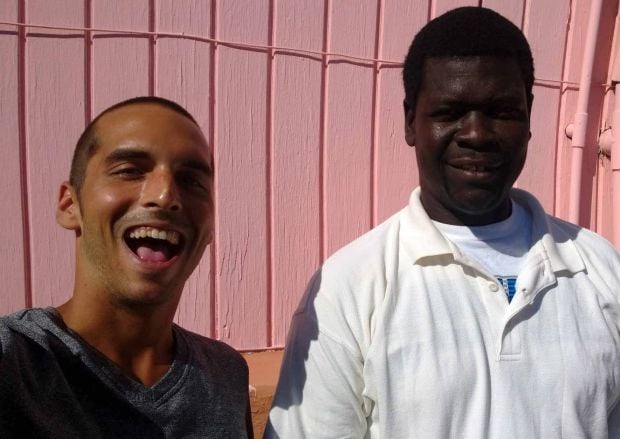 While living in the Virgin Islands in St. Thomas, Kyle McCalister had been working with his new friend 'Buddy,' a victim of abuse, with tools he learned while volunteering at Dove.

DECATUR – After graduating from Millikin University and interning with the Dove Domestic Violence Program, Kyle McAllister was ready for a break. So he left the states for warmer weather.

“I decided to take an extended vacation to St. Thomas,” he said.

McAllister also had family on the island with a new business developing and shipping biodiesel oil. “And it was a great opportunity to learn the workings of a start-up company.” he said.

But with his experiences and education, he couldn't avoid helping people. McAllister received his degree in 2012 with a double major in sociology and philosophy. He knew how to interact with people, even those in a different culture.

Shortly after arriving on the island, McAllister began to use what he had learned while studying in Decatur. “There were individuals who were working on the buildings in my area,” he explained. “One of the individuals, who I'll call Buddy, was intrigued by how friendly I was to the workers.”

Buddy and McAllister began to learn more about each during the next couple of days. After spending several hours together discussing life on the island and personal histories, Buddy learned of McAllister's work with children and domestic abuse.

And McAllister learned of Buddy's history of abuse as a child.

The abuse caused Buddy to struggle throughout his life. “He was always afraid of being judged and made fun of for the pain that he still felt,” McAllister said.

To add to his pain, Buddy was unable to read or write, because he had not been allowed to attend school regularly. After spending time with McAllister, Buddy knew it was OK to tell his story.

“He wanted desperately for someone to understand him,” McAllister said. “He asked me to write his story for him to help give him the comfort that he had been searching decades for.”

But tackling a sensitive subject, like child abuse, can be emotionally challenging for anyone. Even those who are trained in the subject.

McAllister gained most of his experience through his volunteer work at Dove. But before volunteers are allowed to work with the victims and children, they are required to attend Dove's certification program. “To work directly with our clients, they have to go through the 40-hour domestic violence training,” said Teri Ducy, Dove's domestic violence program director.

Although training is mandatory for volunteers, their personality plays a role in the success for both the client and the volunteer. “You can't teach compassion,” said Vivian Reed, Dove's domestic violence program legal advocate supervisor. “You can't train it.”

McAllister demonstrated that compassion throughout his year with the organization. He began his work at Dove by providing legal advocacy for clients and counseling children. His work required him to provide legal documents, court visits and follow-ups for order of protections. “He would be with the client from beginning to end throughout the entire court process,” Ducy said.

The staff soon learned McAllister could be useful throughout organization. Shortly after arriving at Dove, he was offered a position on staff as a third-shift night shelter specialist.

Although he was a man and many of Dove's clients are women, McAllister proved to be a good example, especially for the children.

“It's hard to find a male who does this kind of work,” Ducy said. “To have that positive role model with the kids is huge.”

As Dove's domestic violence program children's specialist, Freda Mathews sees how important those role models can be. “A young guy being in here really helps the teen boys,” she said. “So they can see from a male's prospective that not all males are bad guys.”

To work with children, volunteers need show empathy, “and not appear shocked,” McAllister said. “If you can remain calm, then the story will continue to flow.”

Mathew's volunteers must show an interest in their clients. “A lot of kids come in and they feel like nobody's listening to them,” she said. But she reminds them to stay strong for the children. “You can't cry every time you hear their story.”

It is McAllister's listening ability that has begun to help his friend, Buddy. After watching a television show of adult men confessing their own child abuse, Buddy thought his story should be told. McAllister and Buddy have begun working on his book.

McAllister's experiences have not only helped his friend, but also himself. His plans are to return to Illinois to begin law school so that he can assist Dove in a legal capacity.

“Sometimes the violence I was shown would emotionally cripple me for a few hours, or even a few days in extreme cases,” he said. “But it's hard to remain emotionally crippled when I remember all the people that were safe because of my decision to help.”

Macon Resources Inc. is looking for Secret Santas to provide Christmas gifts for the individuals in their 10 group homes.

Everyday cheapskate: Why you may or may not need an air fryer

Air fryers are sweeping the nation. But what is an air fryer? How does it work? And, most importantly, do you need one? Here's the lowdown.

Everyday Cheapskate: Proven strategies to cut the cost of Christmas

Can you feel the tug? It's the strong pull of the culture that works hard to get the best of us this time of year, to get us to spend more tha…

Bread has a certain shelf life, beyond which it can go stale, become moldy and, in a short time, inedible. It is possible to extend its delici…

Everyday cheapskate: One big, fat, wadded-up mess and how to fix it

5 Tesla Products You Won't Find on the Road

Don't buy these items at the dollar store

Don't buy these items at the dollar store

Director of Volunteers and Community Relations Barb Blakey shows a lounge where volunteers sometimes interact with clients at Dove Inc.

While living in the Virgin Islands in St. Thomas, Kyle McCalister had been working with his new friend 'Buddy,' a victim of abuse, with tools he learned while volunteering at Dove.