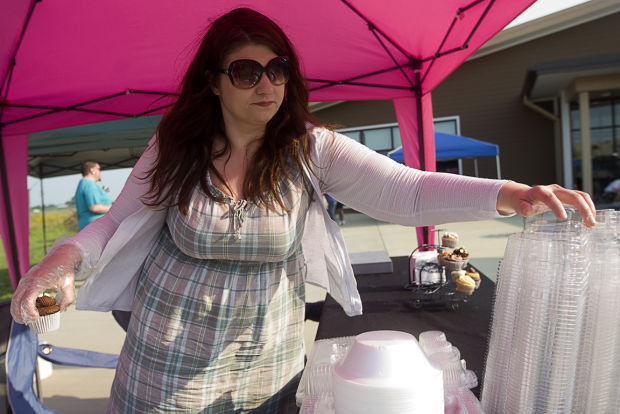 Hannah Medley sells her Lady Pines Cupcakes during the Richland Farmers Market and out of her home via the Internet. 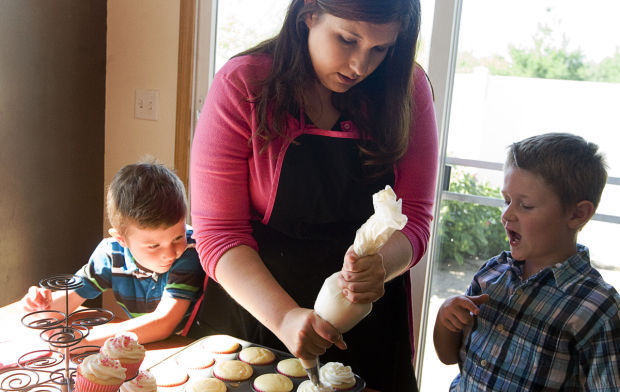 Medley works on icing cupcakes for a shower in her Mount Zion home. The mother of two, Joss and Dexter enjoys being able to work close to her kids from her home kitchen. 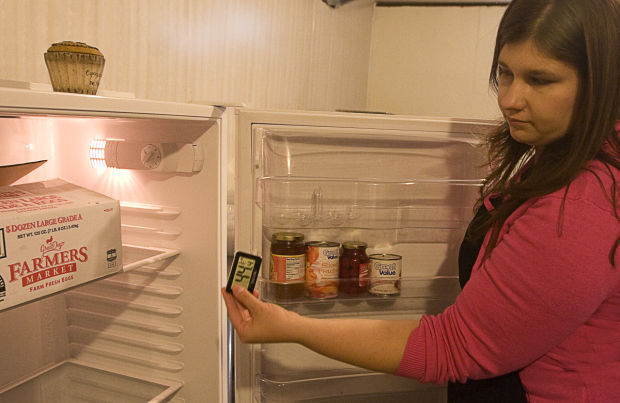 Medley keeps a eye on the temperature of her ingredients at her home-based cupcake business. 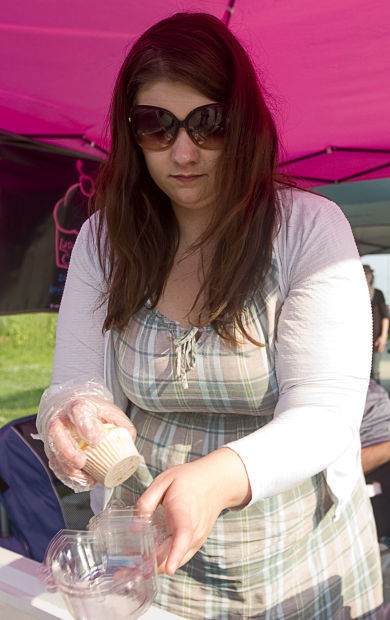 Richland's Farmers Market is one of the places you might find Hannah Medley selling her homemade cupcakes. A new bill signed by Gov. Pat Quinn made changes for those selling baked goods.

DECATUR – Snuggled up next to the traditional booths of lush broccoli and bright tomatoes at farmers markets are their newer, sugary cousins: cookies, breads, jams and jellies.

Since 2011, the Illinois Cottage Food Operation Act has allowed for some foods baked at home to be sold at farmers markets. These foods can be prepared without investing in a license and expense of a commercial home kitchen.

There's a catch though.

The law only applies in counties that chose to adopt it and Macon County has not. So any entrepreneurial youth are technically out of luck if they want to sell cookies made at home.

Kathy Wade helps food people navigate what can be a sticky mess of state and local food licensing rules.

“There are so many different laws and acts that effect a farmers market it can get very confusing to vendors,” said Wade, the director of environmental health for the Macon County health department.

She said outside cottage food, local ordinance does not allow for direct sale from home kitchens and doesn't expect that to change any time soon.

“The one thing as a consumer to remember is the people who have these home bakeries, there’s no requirements,” Wade said.

That also means no guarantees on quality.

Cottage foods include a long list of baked goods such as breads, cookies, cake, pies and pastries. That list also excludes some foods that may be potentially hazardous if they're not refrigerated.

There are some exceptions to the rules.

Churches and nonprofits can get temporary permits for dinner fundraisers if they are prepared in a kitchen with commercial equipment. But bake sales can't be licensed at all in Macon County because the items are from home kitchens.

“I’ve been here 10 years and I don’t think I’ve ever received a phone call about a problem with a bake sale,” Wade said.

Wade said when it comes to home kitchens there are two sides to it: supporting start-ups and following regulations that ensure safety. And there are a lot of people not following rules.

“We have how many other bakeries who have done 100 percent the right channels to do a commercial kitchen?” Wade said.

She points to a Facebook post on the Decatur Anonymous page where people regularly advertise unlicensed bakeries. The baker is at liability if anything went wrong.

“That person that bought that birthday cake,” Wade said. “They’d be able to turn around and sue you,” Wade said.

While cottage food is considered a steppingstone to getting the more expensive food license, Hannah Medley of Mount Zion decided to take her chances on the licensed route first.

Since March, her business, Lady Pines Cupcakes, has been based out of her home. Her two sons, Dexter, 5, and Joss, 6, play in the next room as she works in her commercial kitchen in the basement of their home.

“I went in knowing nothing,” Medley said. “The people at the health department were wonderful to work with.”

She and husband Paul invested in a new oven, fridge and sink to meet code. She takes individual orders and also sells at events like Richland Community College farmers market and Chill on the Hill.

Although it was a long, expensive process, with regular phone calls to the city, health department and state, Medley said they wanted to do it once and do it right the first time.

“If it's not something you truly want, it might not be worth it,” Medley said.

Nutrition and wellness educator Caitlin Huth will be one of program instructors for an upcoming U of I Extension Office cottage food workshop.

“We will cover multiple aspects of the cottage food laws, which includes the foods that are allowed to be sold at Illinois farmers markets those that are excluded and some of the details,” Huth said.

The health department is still the go-to for information on selling cottage foods, but Huth said the class is a good introduction to the details.

“It is a little bit daunting the first time you might think about it,” Huth said.

Details such as knowing how to design a cottage food label so the consumer knows it's made in a home kitchen or that honey doesn't fall under the law.

The first time they hosted the workshop, most of the audience was food growers looking to expand on other ways to sell their produce. The workshop also covers kitchen safety and clean product preparation. Those registering as cottage vendors must also be certified as food service sanitation managers.

“This is going to be a more entrepreneurial person who really has that initiative,” Huth said.

For more information on creating a Cottage Food business, contact the Macon County Health Department at (217) 423-6988.

The University of Illinois Macon County Extension is offering a “From Garden Gates to Dinner Plates” program from 6 to 8:30 p.m. Wednesday, Sept. 17. To learn more about Illinois' cottage food regulations, register online at web.extension.illinois.edu/dmp or call (217) 877-6042.

Perhaps you've noticed that it's not easy to get out of the typical American supermarket with exactly what you went in to purchase. Believe it…

Just as I was wondering what on earth I would do with all of the basil, oregano and chives in my garden, here came a note from Ginny M. of Min…

Everyday cheapskate: 6 ways to give yourself a tax-free raise

These days, with the cost of just about everything going up, who isn't looking for ways to increase their income? If you're hoping the boss wi…

Everyday cheapskate: Ask Me Anything: Help! My White Laundry Is coming out Dingy and Gray, and Which Size Instant Pot?

Dear Mary: How can I whiten my whites? I have well water, and I use homemade laundry detergent. But my whites -- especially my white uniforms …

Everyday cheapskate: A guide for how to be a gracious houseguest

It was shocking, if not surreal. The email was from a woman I'd never met and whose name I recognized only because a few months earlier, she'd…

AT HOME WITH MARNI JAMESON: The upside of rightsizing

Moving is no fun. Neither is getting rid of stuff. And both jobs get harder as we get older. So when seniors are looking to downsize and move …

It's been a number of years since I moved into a college dorm room. My memories of college life are both vivid and precious.

Five foods you should never give your dog

How to pick your pumpkin 101

How to pick your pumpkin 101

Hannah Medley sells her Lady Pines Cupcakes during the Richland Farmers Market and out of her home via the Internet.

Medley works on icing cupcakes for a shower in her Mount Zion home. The mother of two, Joss and Dexter enjoys being able to work close to her kids from her home kitchen.

Medley keeps a eye on the temperature of her ingredients at her home-based cupcake business.

Richland's Farmers Market is one of the places you might find Hannah Medley selling her homemade cupcakes. A new bill signed by Gov. Pat Quinn made changes for those selling baked goods.