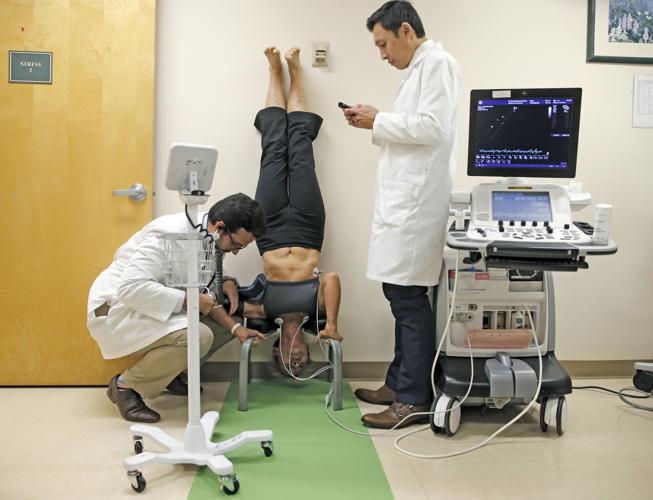 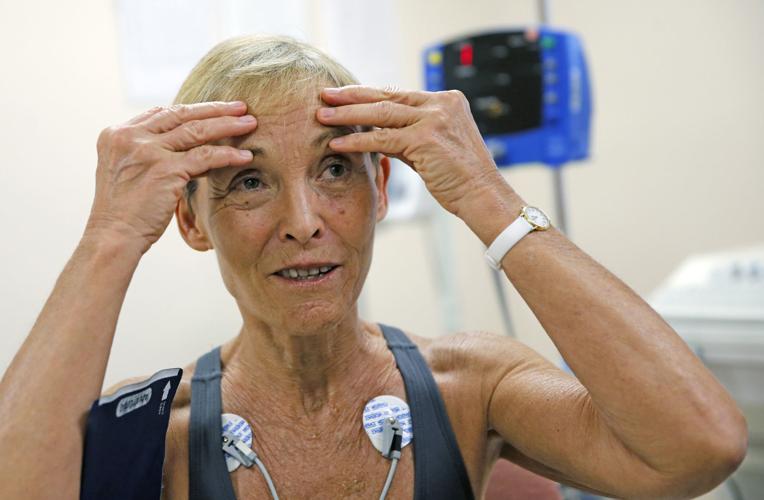 Sally Mertens, 74, has done yoga for a long while, but was recently diagnosed with a cardiovascular condition. She wants to continue practicing yoga but doctors don't know whether upside down poses might put stress on her aneurysm.

MIAMI BEACH, Fla. — The room was buzzing with doctors, an ultrasound technologist and a yoga instructor. The two cardiologists were huddled in the center checking the heart rate and blood pressure. And there, against the wall near the door, the patient, Sally Mertens quietly stood on her head.

The hope: Mertens’ headstands would deliver promising medical clues about the effects inversion yoga poses have on cardiovascular patients.

Mertens, 74, a devoted yogi the last 15 years, has been diagnosed with a thoracic aortic aneurysm — a weakening in the aorta, the major artery that carries blood from the heart to the body. A rupture can be life-threatening.

But with little research available, Mertens’ doctors didn’t know whether inverted or upside-down moves pose a risk. That could soon change.

“The major complication we worry about is tears in the walls of the aorta, which could lead to a medical emergency called an aortic dissection. We are hoping to get information including blood pressure when she goes into a pose, what happens to her heart rate and also what happens to the size of her aorta,” said Dr. Jeffrey Lin, a board-certified cardiologist specializing in sports cardiology at Mount Sinai Medical Center in Miami Beach. “The hope is to get more information so we can come to a good decision about how we can maintain her quality of life in terms of her doing yoga, but at the same time protect her from a cardiovascular perspective.”

And that’s how Mertens came to be in the hospital’s Echo Lab, in a modified headstand one afternoon late last week. She was hooked up to an echocardiogram, blood pressure cuff on her arm, yoga instructor Edwin Bergman by her side.

Mertens retired 14 years ago as an economic development executive, then embraced the practice. “I was always interested in yoga but when I was working, I simply could not arrange my worklife around a disciplined yoga schedule,” she said. “I retired early at 60, and yoga was No. 1 one on my list. Seriously, in the first week, I found a class in Miami.’’

Mertens was instantly drawn to its simplicity. The way it made her feel. The people it attracted.

“I love the breathing in the room,” she said. “After 10 or 15 minutes, the group becomes an organic experience.”

She had just moved to Santa Barbara, Calif., seven years ago when she was diagnosed with a thoracic aortic aneurysm. She returned to Miami four years later, still regularly practicing yoga. In 2014, she discovered Iyengar yoga, a form focusing on precision and body alignment. Headstands are among the poses.

“My doctor knew I was doing yoga, and he just said no inversions,” said Mertens, who lives in Miami. “… so I avoided putting my foot over my head because they were afraid that there will be a rupture of this weak spot in my aorta.”

Now, doctors are using her as a case study, for herself and others facing similar circumstances. Mertens stood on her head while the doctors recorded the effects on her blood pressure and heart rate. They also performed an ultrasound, capturing images of the throat area.

The initial results showed mostly showed moderate increases in her blood pressure and heart rate. The first time, the rates were higher but later stabilized. They also did not see any discernible changes in aortic size.

In the next couple of weeks, Mertens will return for more tests determine if the aneurysm has grown since last checked.

“I think upon review of the data, the risk is relatively low, especially since her condition has been relatively stable over the years,” said Lin, a graduate of Harvard Medical School. “The way her blood pressure and heart rate responded was similar if you were putting someone on a treadmill.”

It's not all in the genes: Clean living can cut heart risks

NEW ORLEANS (AP) — Clean living can slash your risk for heart disease even if your genes are heavily stacked against you. A large study finds …

How to respond when your child is lying

Two ways to stop condensation from forming on your windows

Two ways to stop condensation from forming on your windows

The right way to transport a Christmas Tree on your car

The right way to transport a Christmas Tree on your car

Study: The effectiveness of the COVID-19 vaccine can increase with added exercise

Study: The effectiveness of the COVID-19 vaccine can increase with added exercise

Sally Mertens, 74, has done yoga for a long while, but was recently diagnosed with a cardiovascular condition. She wants to continue practicing yoga but doctors don't know whether upside down poses might put stress on her aneurysm.