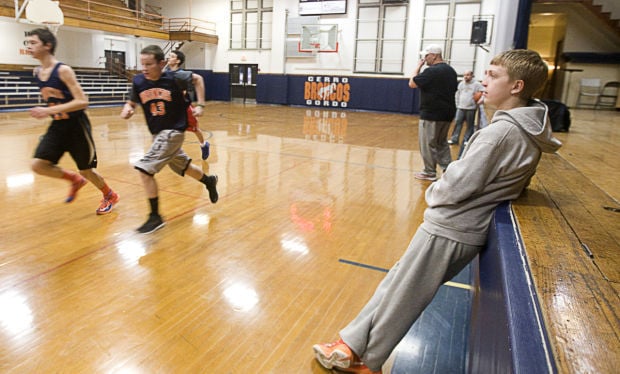 Seth O'Neal is on the sidelines this basketball season but hopes to return next year. His coaches saved his life when they used one of the Cerro Gordo schools AED devices on him early in December. 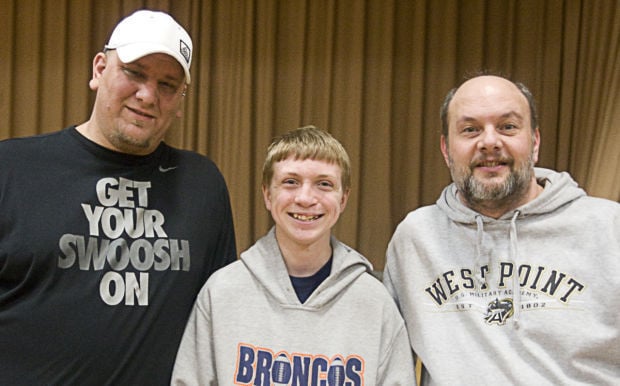 Seth stands between his coaches Jason Navratil, left and Jason Jacobs who helped to save his life with one of Cerro Gordo's AED devices. 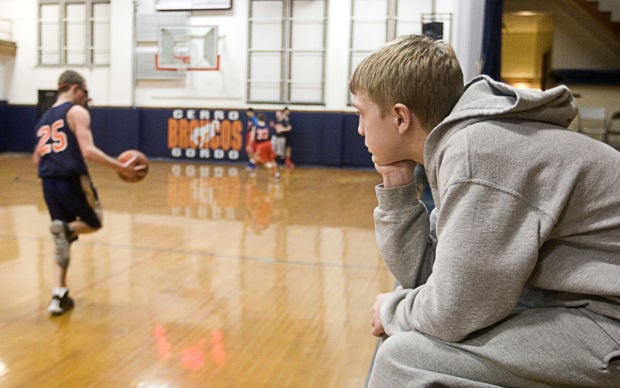 Seth is on medication to control his heart rate and is on the bench for at least six months.

CERRO GORDO – Every school has emergency plans that they hope to never use.

Cerro Gordo Elementary School's automated external defibrillator was put to the test for the first time in December when it and the actions of two quick-thinking coaches saved the life of a 13-year-old.

It was the end of practice for the eighth-grade basketball team. Seth O'Neill and his teammates were doing conditioning running when his coaches and teachers Jason Jacobs and Jason Navratil thought they saw him trip. However, the multisport athlete never put his hands out to break his fall.

“I turned around and started getting really dizzy,” Seth said. After that, his memory is fuzzy.

Seth had passed out and hit the wall as he fell to the ground face-first. By the time Jacobs reached him, the teen didn't have a pulse and was turning blue. With no time to think, their training kicked in.

Navratil called 911, cleared the other boys from the gym and grabbed the nearby AED, while Jacobs began giving rescue breaths and started CPR. The AED analyzed Seth's failing heart and determined it needed an electric shock to restore the rhythm.

"Who would have thought we would have used one on a 13-year-old at basketball practice?" Jacobs said.

By the time Susan and Mike O'Neill arrived, their son was on a stretcher, but conscious. On the ride to St. Mary's Hospital, Susan O'Neill remembers the EMTs asking if the now-alert boy had really been shocked. Susan, who works as a nurse, had to check under her son's shirt for the tell-tale burn marks from the jolt that got his heart pumping again.

They were transferred to Springfield and then to St. Louis Children's Hospital in a helicopter ride that Seth still talks about. There, the O'Neill's learned that the well-placed AED had done more than save Seth's life, it also took a picture of his heart's rhythm.

“(Jacobs) said get me a fax number we’ve got the (heart) rhythm,” Susan O'Neill said.

In a moment where the stars aligned perfectly, she showed the image to Seth's pediatric cardiologist who was standing nearby and confirmed it was an undiagnosed, irregular heart rhythm that would have killed the teen.

"At the children’s hospital, almost every nurse and doctor said 'do you know what the coaches did for you?' " Susan said. "This is a miracle.”

One of Seth's doctors called Jacobs and Navratil, who until that moment were worried they'd done something wrong or that the machine malfunctioned.

"Him saying 'you did the right thing' took a lot of stress off us," Jacobs said.

The school district recognized the coaches at its December board meeting, commending them for their quick actions.

"Most of us can only imagine being faced with such a circumstance and hope we would react in a like manner," read the letter from Robinson and board President Todd Henricks.

Under Illinois law, any school with a physical fitness facility must have at least one AED and trained staff member on site during activities. The state started providing matching grants in 2008 for schools and other public agencies to purchase the device through the Heartsaver AED Fund.

Cerro Gordo started phasing in one AED yearly for their three school buildings through that program. They also created a required emergency response plan. Seth's situation was the first time they've needed to use either, said Cerro Gordo School Superintendent Brett Robinson.

"Thank goodness we've only had to use it once," Robinson said.

The O'Neill family knows all too well the importance of the life-saving machines now. Mike is working to improve AED placement at his work and Susan said she keeps an eye out for the machines wherever she goes.

Seth's chest scar from the surgery – or a shark bite if you ask him – for an implanted defibrillator is the only physical reminder of the short time he spent in the hospital. Besides family, Jacobs and Navratil were the first people to visit Seth when he returned home and welcome him back to school less than two weeks after he'd left on a stretcher.

Seth is on medication to control his heart rate and is on the bench for at least six months, a miracle the family still struggles to understand.

DECATUR -- July 11 began like any other summer day for 16-year-old Hannah Bean. She got up, attended an acting summer camp, posted photos to F…

'Stop the Bleed' movement trains bystanders to save lives

SEATTLE — Dr. Eileen Bulger wants you to know that CPR is not enough.

'It's good to be alive' for heart walkers

DECATUR -- Just over a year ago, Mia Jarrett was lying in bed with a back ache that just wouldn’t go away.

DECATUR — Any parent of a child with a heart disease never feels completely at ease when their child is out of their sight.

John King: It's a horrific time to become president

Biden urges states to open up vaccinations for more Americans

Biden urges states to open up vaccinations for more Americans

Seth O'Neal is on the sidelines this basketball season but hopes to return next year. His coaches saved his life when they used one of the Cerro Gordo schools AED devices on him early in December.

Seth stands between his coaches Jason Navratil, left and Jason Jacobs who helped to save his life with one of Cerro Gordo's AED devices.

Seth is on medication to control his heart rate and is on the bench for at least six months.