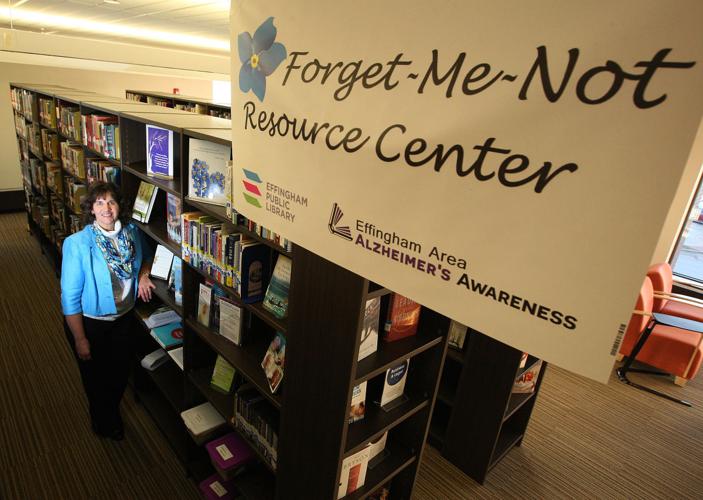 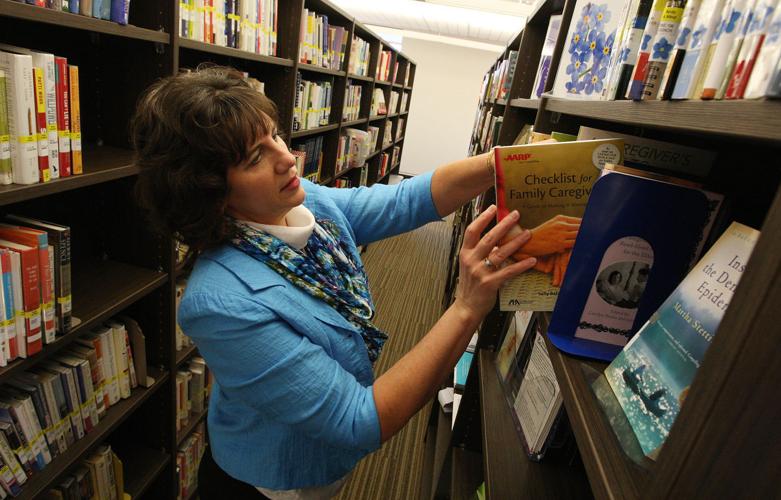 Nosbisch returns a book to the Forget-Me-Not Resource Center in the Effingham Public Library. 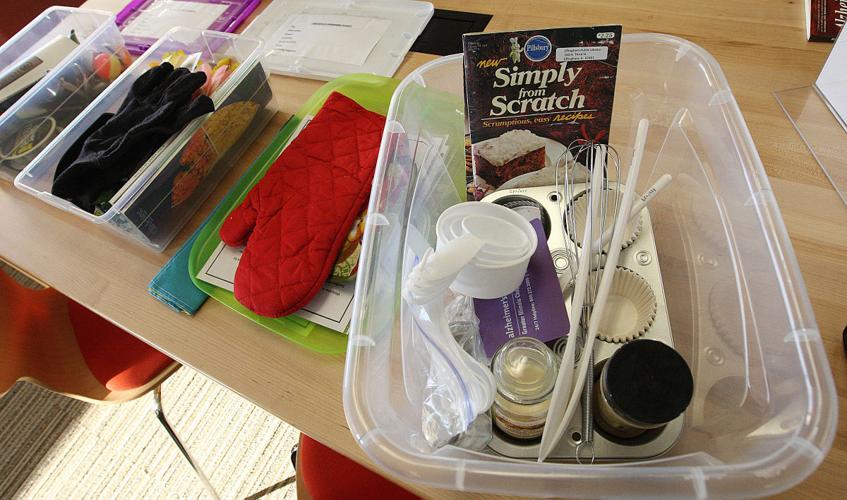 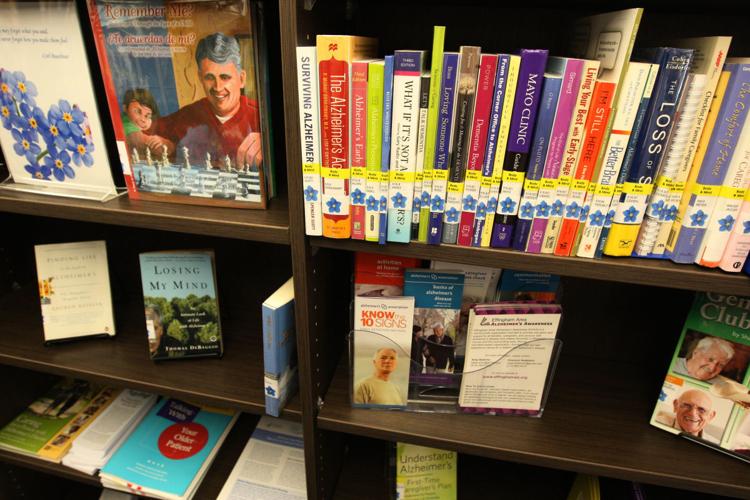 The Forget-Me-Not Resource Center currently has over 120 resources for Alzheimer’s disease and is continuing to grow.

Amy Sobrino attended a Walk to End Alzheimer's event in Edwardsville her first year of college and had an epiphany.

Sobrino had grown up with a grandmother with Alzheimer's, and joined the rest of her family as a caregiver when she was old enough. At the time, she thought being a teenage caregiver for an Alzheimer's patient was normal. But the more people she talked to, the more she realized it wasn't.

When she attended the gathering in Edwardsville during her first semester as a student at Southern Illinois University-Edwardsville, she realized how important it was for Alzheimer's caregivers to connect with others in a similar situation.

"The emcee started talking about how many people were touched by Alzheimer's and there were all these people there and I remember thinking, 'This is amazing that so many people are here supporting each other and being champions for each other,'" Sobrino said. "I had never felt like that before in my journey as a caregiver.

"After that, I started thinking, 'If this is out here, I wonder what else is?'" Sobrino said. "So I started diving into everything I could."

Sobrino went on to earn her bachelor's and master's degrees in social work. And, along the way, formulated the idea for Effingham Area Alzheimer's Awareness (EAAA).

The EAAA has been in existence for a little more than a year now. It's a not-for-profit organization founded to provide education and support to all families, caregivers and people with Alzheimer's disease and related dementia in Effingham County and the surrounding area.

"I'd been volunteering with the Alzheimer's Association and had gotten certified as a trained speaker, I'd given some presentations at the library," Sobrino said. "I approached the Greater Illinois Chapter of the Alzheimer's Association about some special projects and fundraisers in the area, but they weren't really set up for that, so I started looking at what it would be like to start a not-for-profit. It's funny how life works, when I started out in this, I would never have thought I'd be part of running a not-for-profit."

Sobrino was 9 when her grandmother, Anna Mae Nosbisch, her dad Ken Nosbisch's mom, was diagnosed with Alzheimer's. Ken and his brother Linus run a farm together and Anna Mae lived at the main farm with Linus, about a mile from Ken, his wife Shannon and their children.

At first, Anna Mae didn't need a lot of extra help. But soon, as the disease progressed, she needed constant care. Two days a week, Shannon would go to the house to cook, clean and take care of Anna Mae. They hired a nurse to come in a day a week and two of Anna Mae's daughters that live in Illinois helped when they could. Soon, Ken and Shannon's children, particularly Amy, the oldest, were helping out, too. But most of the care fell to Linus.

"Amy always grew up with the question, 'Who is going to take care of grandma?'" Shannon said.

Anna Mae died in June of 2014, and in November the EAAA was officially formed. In the last year-plus, the EAAA, led by Shannon and Sobrino, has held a series of community education presentations, opened the Forget-Me-Not Resource Center at the Effingham Public Library, helped form the Forget-Me-Not Cafe and began an initiative to make Effingham a dementia- and aging-friendly community.

Sobrino lives in Glen Carbon and works as VOYCE Regional Ombudsman Coordinator. Her job is to be an advocate for those living in the long term care community. While Sobrino does what she can remotely, it's Shannon whose boots are on the ground in Effingham.

While Shannon doesn't have the formal education Sobrino does, she's jumped into her role with the EAAA.

"I've kind of trained myself, I guess," Shannon said.

Sobrino has been amazed at the way her mom has embraced the organization.

"She's just an amazing individual," Sobrino said. "Whenever I'd be studying something in school, we'd always talk about it. She'd seen it firsthand like me and, like me, her passion started to ignite.

"It's been incredible. We did a presentation together for the first time on Nov. 12 and it was such a cool experience. I'm really grateful for her. We created this organization because of our experience as a family, and now we're carrying it out as a family."

Sobrino said her dad and aunts are all involved, and Linus is a member of the EAAA board. But it's far from a mom and pop operation – Johnna Schultz from the library is on the leadership council, and the board includes several Effingham residents working in the field of nursing, senior care and human services.

"We're trying to get everyone involved," Shannon said. "And as more people become aware, more people are getting involved.

"There are so many ways to help people with Alzheimer's and their caregivers. It's a stressful, emotionally exhausting job to be a caregiver. We just want to give them as much help as we can."

URBANA – Professor Fred Kummerow needs money. The biochemist at the University of Illinois wants to study the link between diet and Alzheimer’…

Alzheimer's Walk carries memories for all who suffer

Watch Now: 10 tips for traveling with a large group

Watch Now: How much to spend on a wedding present?

Watch Now: How much to spend on a wedding present?

Nosbisch returns a book to the Forget-Me-Not Resource Center in the Effingham Public Library.

The Forget-Me-Not Resource Center currently has over 120 resources for Alzheimer’s disease and is continuing to grow.