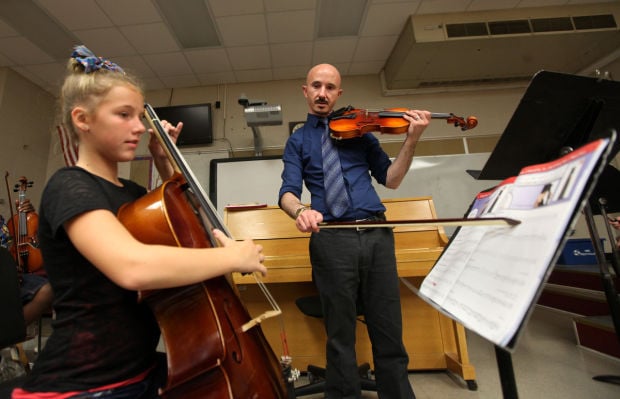 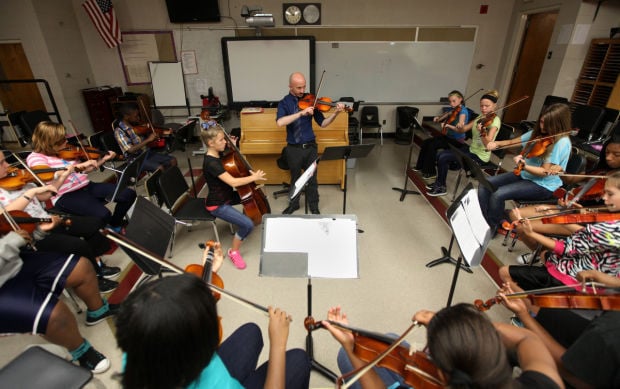 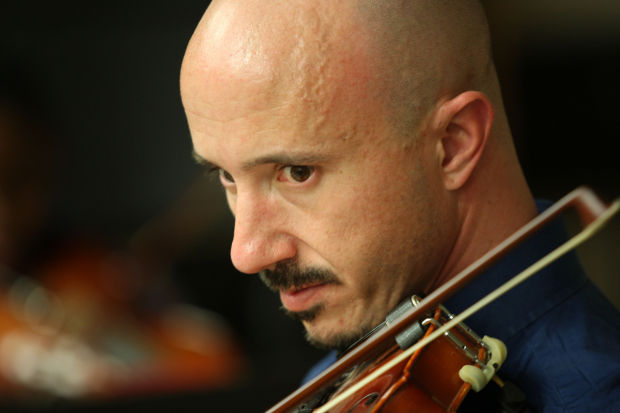 Garold Fowler keeps an eye on his students as they practice during his orchestra class at Thomas Jefferson Middle School. 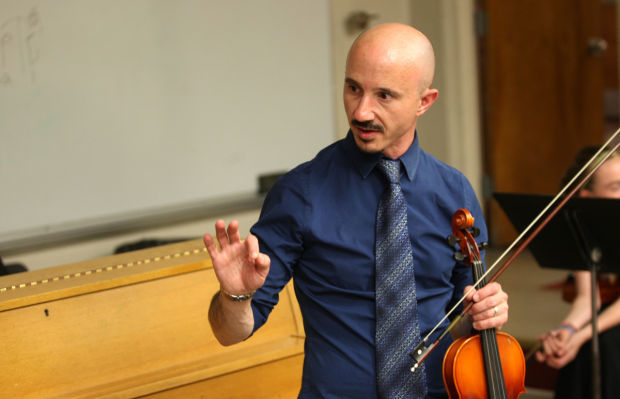 DECATUR — Leaning against the wall in the Durfee Magnet School office is a tall instrument case containing what is variously known as a stand-up bass, a double bass and occasionally a doghouse bass.

It belongs to Garold Fowler, who is new to Decatur schools this year and teaches orchestra to students at Thomas Jefferson Middle School as well as Durfee, Stevenson, Harris and South Shores schools. He holds a doctorate from the University of Illinois-Urbana and his specialty is tango.

That’s why when his friend Alaric Rocha, formerly of Decatur and now of Chicago, was looking for someone to score his film, “Deadly Embrace,” which is all about tango, it only made sense to ask Fowler.

“It’s a movie about Argentine tango,” Rocha said, “and to me the actual embrace, the way the tango partners hold each other, is important in the dance. The story is kind of a thriller and I just tied the two together.”

Rocha took up tango after seeing it in the film, “Scent of a Woman,” and the couple who taught him also taught Fowler.

There’s a lot more to tango music and dancing than casual observers realize. In Champaign alone, Fowler said, there are several groups who meet regularly for dance parties. There’s a professional performing group, Tango Espejo, also based in Champaign.

“My doctoral research was based on the music of Astor Piazzolla,” Fowler said. “I took 13 of his pieces and did performable editions, because most of the published scores aren’t performable; there are too many mistakes.”

The reason is that somewhere between the composer and the publisher, someone wrote the music down wrong, so Fowler sat down with recordings by the composer himself and transcribed the proper parts. His tango music was written for bandoneon (a squeezebox), violin, electric guitar, bass and piano.

That background allowed him to choose traditional tangos for the score of “Deadly Embrace,” as well as write two original compositions for the film: “Quando Penso a Te” (Italian for “When I think of you”) and “Ber’s Theme,” named for the female lead character. Both songs, he said, were inspired by his daughter Noella.

Rocha has entered “Deadly Embrace” in several independent film competitions, including some like Sundance, which could garner widespread attention if it’s accepted and does well. Fowler’s two original compositions have been entered into an international songwriters’ competition as well, and judges for that include Tom Waits, members of The Cure and Duran Duran.

So far, the film has been shown in Chicago and Buenos Aires, Argentina, where it was well-received. The soundtrack is available on Amazon and iTunes.

Garold Fowler, orchestra teacher for Decatur Public Schools, was asked to score a noir film about tango. The film, "Deadly Embrace," was writt…

Garold Fowler keeps an eye on his students as they practice during his orchestra class at Thomas Jefferson Middle School.