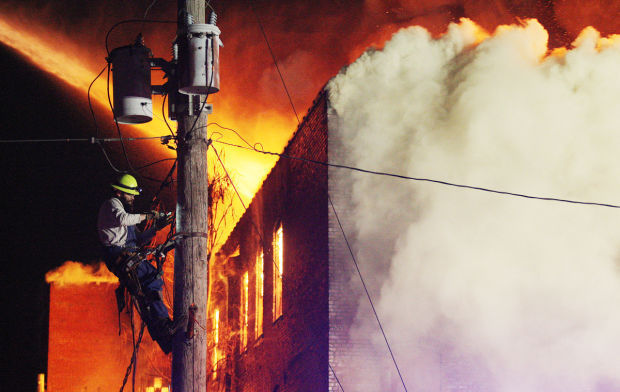 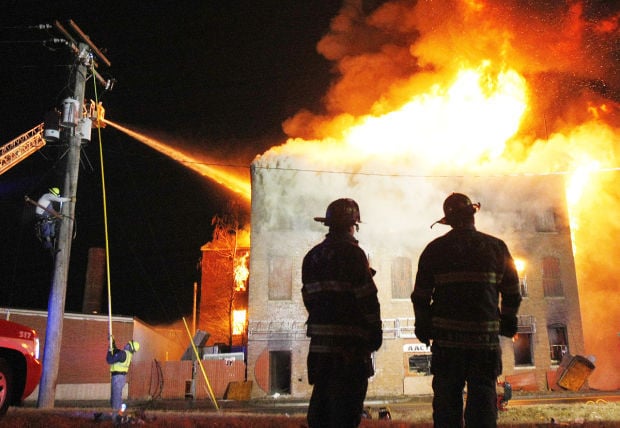 Maxheimer and Mike Fair, on the ground, of Ameren Illinois shut off electrical lines for Decatur firefighters' safety. 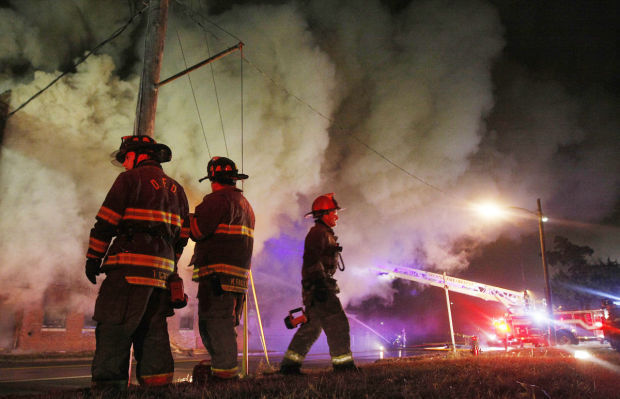 Decatur firefighters work around electrical and utility lines next to the Aaction Equipment warehouse fire Jan. 21. 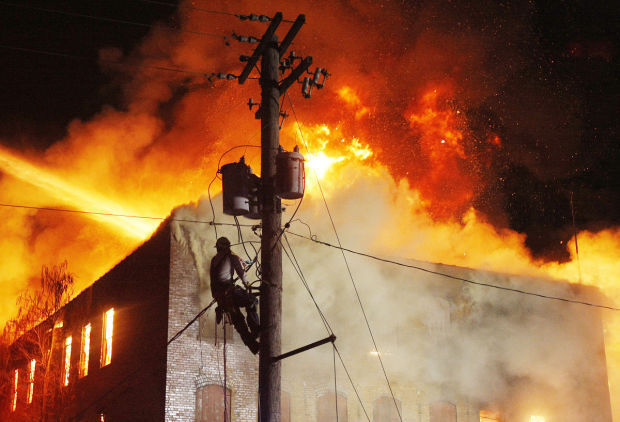 Ameren Illinois journeyman lineman Chad Maxheimer disconnects power to the Aaction Equipment warehouse as flames rapidly expand across the street from him during the January 21st blaze.

DECATUR – Silhouetted by a blazing warehouse and working fast under pressure to disconnect 240-volt power lines to keep teams of firefighters safe, Ameren Illinois lineman Chad Maxheimer was having a rewarding day at the office.

Not that he's oblivious to the dangers of a job where the wages of error are instant death, but for those who like work that can take them down to the wire in a rush of adrenalin, being a lineman has got the high-voltage goods.

“Now, safety is always first: One mess-up, that's it,” said Maxheimer, 33. “But yes, I do enjoy it. I like the action. I like to be doing the job when it really matters, when it's really important.”

And it doesn't get much more important than the evening of Jan. 21 when the Aaction Equipment building, a vast turn-of-the century warehouse filling most of the block at North Illinois Street and East Grand Avenue, went up in flames.

Maxheimer and lineman colleague Mike Fair were Ameren Illinois' “trouble men” on call that night for emergencies that might range from a single downed line to the biggest fire Decatur has seen in years.

The first call of duty was to cut the power to the warehouse so firemen, while they're swinging around giant metal ladders and spraying tons of water all over the place, won't be in danger of being electrocuted.

The fire crews asked the linemen to stick around, however, because it was clear this fire wasn't going down without a fight, and surging flames began to threaten nearby homes. It wasn't long before the linemen were in action again, shutting off more nearby power lines as wind-driven flames surged out of the warehouse and began to melt the siding off facing houses.

Maxheimer said there were too many vehicles to maneuver the bucket truck in place, his preferred method of going aloft, so he had to shin up poles the old-fashioned way, which was where he was when the Herald & Review snapped the dramatic picture of him in action.

And it was hot up there. Maxheimer, who has a luxuriant beard, could feel the heat trying to toast it as he sweated and worked.

“Power poles were smoking, everything was smoking,” he said. “Mike and I knew we had to get that power off. We ended up killing power to that whole block, and then we could tell the firemen, 'Hey, don't worry. It's all shut off.'”

An Air Force veteran who maintained helicopters in frontline war zones from Iraq to Afghanistan, Maxheimer said the dangers of this job have to be kept in perspective: After all, no one is trying to kill you.

But now he's got a family's sensibilities to worry about – wife Shelly and children Briar, 6, Kep, 5 and 3-year-old Ashton at home in Latham – and he gets nervous about them switching on the news and seeing husband and daddy backlit by an inferno.

“I told Shelly that you probably don't want to watch the TV news,” he said with a smile. “But she always knows anyway. She also knows we're safe here at Ameren, and we do whatever we can to make sure we get to go home every night.”

Finding recruits with the aptitude to handle the technical and safety training and the willingness to go out in all weathers and circumstances to do the work is a constant job for the utility's managers. The money is really good, about $35 an hour for fully qualified lineman, plus overtime, but you're going to earn it.

“Yes, the rewards are good,” said Ron Pate, Ameren Illinois senior vice president of operations and technical services. “But not everybody wants to go out and climb a pole at 2 a.m when its 20 below zero or when a fire is breathing down your neck. It takes a certain type of person, and I couldn't be more proud of guys like Chad and the pride they take in serving our customers.”

DECATUR – Starting in pole position takes on a whole new meaning when you are an Ameren Illinois lineman heading out to the rodeo.

Ameren Illinois recently spent $300,000 installing automated external defibrillators on crew trucks across Central and Southern Illinois after workers banded together to request them.

Maxheimer and Mike Fair, on the ground, of Ameren Illinois shut off electrical lines for Decatur firefighters' safety.

Decatur firefighters work around electrical and utility lines next to the Aaction Equipment warehouse fire Jan. 21.

Ameren Illinois journeyman lineman Chad Maxheimer disconnects power to the Aaction Equipment warehouse as flames rapidly expand across the street from him during the January 21st blaze.