News about your community. Support the Herald & Review. 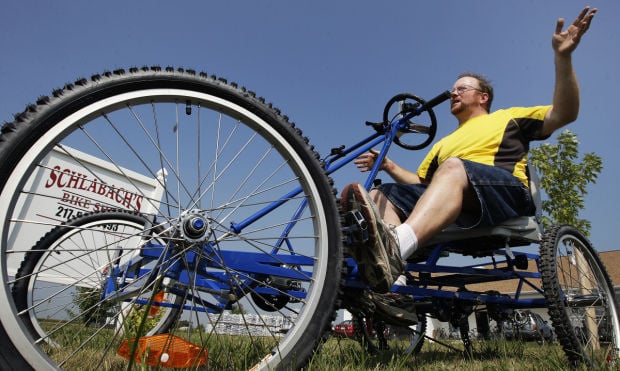 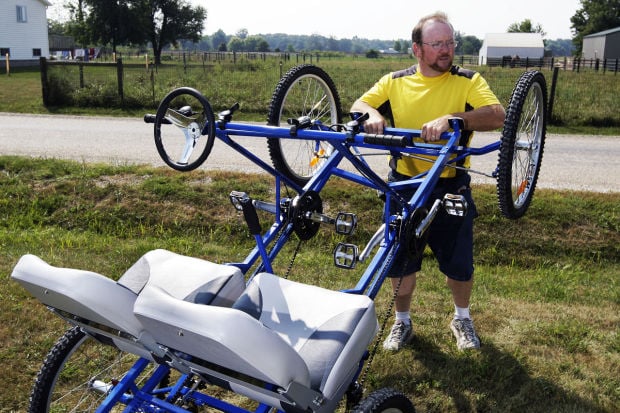 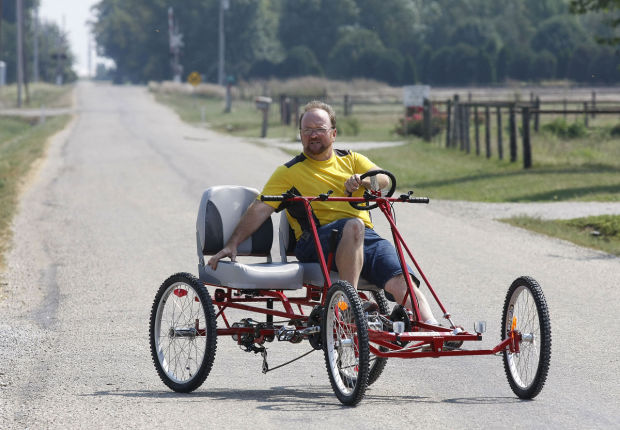 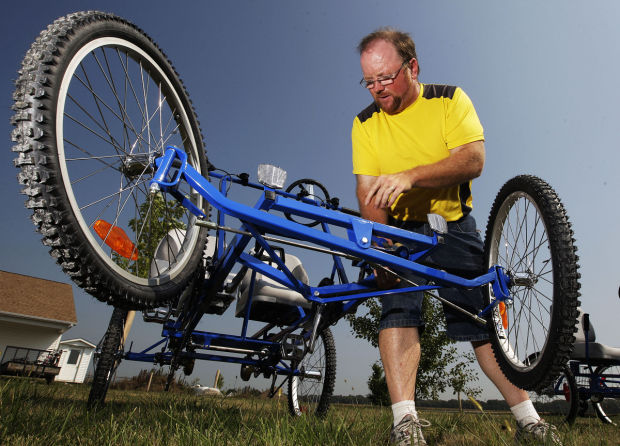 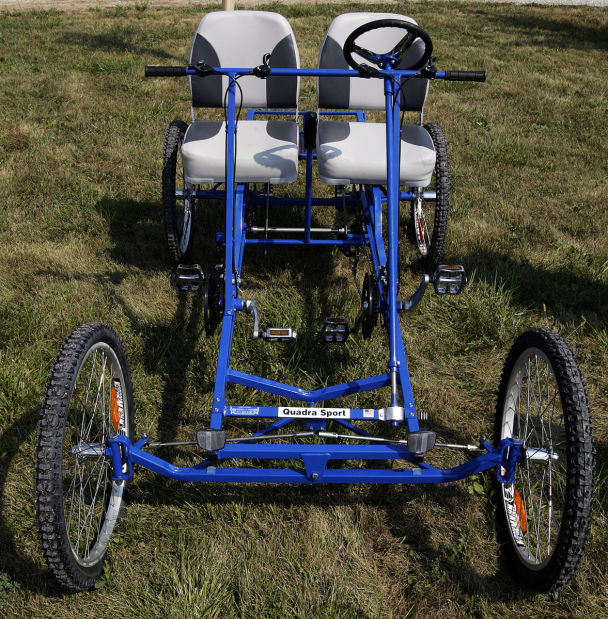 TUSCOLA — In the old song about a financially challenged beau lusting after a sweetheart called Daisy, he tells her: “It won’t be a stylish marriage/I can’t afford a carriage/but you’ll look sweet upon the seat of a bicycle built for two.”

Well, ditch that old-fashioned tandem and wait until Daisy gets a load of this: introducing the Quadracycle, the 21st-century answer to heading out on the highway in search of romance or whatever comes your way.

Born to be mild rather than wild, the Quadracycle is a two-seater bicycle with the seats side by side and the bike has four wheels rather than just two. Only one person steers, but both parties pedal, and they motivate themselves via a 21-speed shifting system on each side so you could argue the Quadracycle actually has 42 speeds. But a clever gearing system blends the power so you basically move at the speed of whoever is pedaling fastest.

This four-wheeled chariot is more about comfort than velocity, however. Assembled at the Amish-owned Schlabach’s Bike Shop near Tuscola, it’s crafted with the cruising class in mind.

The cushy seats, with their padded backrests, are normally found on boats, and the bike is steered with a steering wheel rather than handlebars, the smooth mechanism working through a rack-and-pinion system just like in your car. The front axle also pivots up and down to smooth out the way ahead, and the overall effect is a far cry from the shock and awe of regular cycling on Illinois’ less than bike-friendly road surfaces.

“Nice, isn’t it?” asks Quadracycle sales representative Rich Flavin as he takes a visitor out for a test drive. Flavin, 48, is a non-Amish four-wheel bike believer from Peoria who runs a sales website for the Quadracycle.

On this fine day, the September sun beats down out of an azure blue sky, but that doesn’t have to be a problem for long: The Amish, having access to just about every skill set available in God’s green creation, Schlabach’s has contracted with a specialist shop called Otto’s Canvas to build brightly striped canopies that shelter the seats and are available as an option, along with chrome chain guards and fenders, dual mirrors and a horn.

Daisy would no doubt be impressed.

“This is what you would call a more sociable tandem,” Flavin adds.

It’s not cheap, but you are getting made-in-America quality that is built to last. Schlabach’s is owned by Eli Mast, 31, and his cousin John Mast owns Okaw Machine LLC, which handles the steel frame welding and custom powder coating paintwork in either red, blue, yellow, green, white or black. A standard basic two-seater called a “Sport” costs about $2,200, while a single-seat version for those who just want to be alone — the “Sprint” — goes for $1,650 in base trim.

If you really want to put the pedal to the metal and go for the ultimate multipassenger bike experience, there is the Quadracycle “Metraquad Deluxe” package at $2,000 that adds another two seats and two wheels to the Sport to seat one driver and three Daisys at the same time. “We’ve previously sold one, and we’ve got a second guy just picked his up the other day, and there is a third guy in the wings looking at one,” said Flavin.

Mast, who owns Schlabach’s, says sales are going well across all Quadracycle categories as America embraces a bike with a wheel on each corner. “We’re selling them all over the United States, shipping them to Washington state, the state of Texas, New York and Florida,” explains Mast. “We’ve been to all four corners now.”

Mast has been producing and refining Quadracycles since 2010, after buying out the original Indiana company that developed them. He describes it as a specialist niche market that appeals to his bike sensibilities and is on an upward cycle in customer demand.

“It’s a good way to go riding together,” he says of the multiseaters. “And you can carry on a conversation much easier if you are sitting side by side.”

Flavin says one grandfather customer he knows is getting his two-seater Quadracycle upgraded to a Metraquad so he and grandma can go for a spin with the grandchildren. “He tells me he is hoping to put the grandkids on the front and him and his wife at the back,” Flavin said. “And then the grandkids won’t know if he is pedaling or not.”

The incident on the grounds of the Decatur Masonic Temple is the latest in a series of violent confrontations at that location.

Officers say son's gun was stolen and they also seized cannabis from the house.

She says he became angry when she refused to discuss their relationship.

Decatur man who made $300 a week selling meth gets arrested, police report

Police said they seized the drug, cash, plastic baggies and an electronic scale.

Firefighters report two people were taken to a hospital late Sunday morning after a collision between two pickup trucks at the intersection of West Grand and Fairview avenues in Decatur.

Police said he was found to be carrying Ecstasy pills.

Authorities said the driver lost control on 1000E near 1800N in Shelby County.

He apologized after he was arrested.

He was also arrested on DUI and drug charges.

WH: Omicron variant found in 20 countries, not US

WH: Omicron variant found in 20 countries, not US