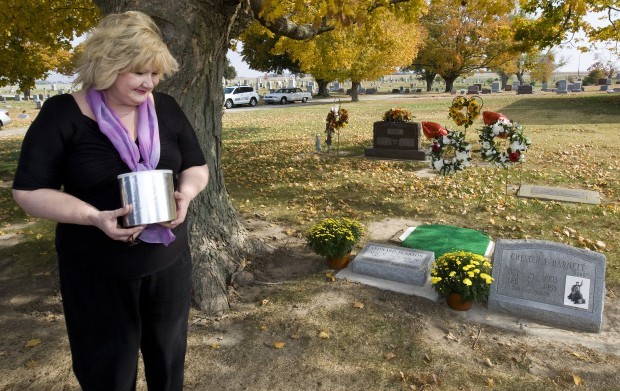 Herald & Review/Kelly J. Huff Bonnie Barnett, daughter of the late Chester E. Barnett also known as Bobo the clown, prepares to lay the remains of Bobo's circus sidekick, Leonard Pearson, next to her father in Keller Cemetery near Lovington, in order to reunite the duo. 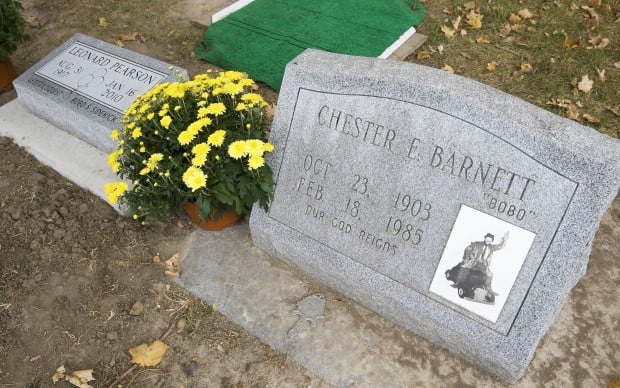 LOVINGTON - After a long separation, circus clown Chester "Bobo" Barnett and his sidekick, Leonard Pearson have finally been reunited.

Bobo died 25 years ago while Pearson died in January.

It marked an end to an emotional journey for Barnett who had been in Decatur on Saturday for a book signing at Haines & Essick. The book is "Bobo's Daughter," one woman's journey to find hope, healing and the father behind the face paint.

Bobo and his wife, Dottie, Bonnie's mother, divorced early. Bonnie first met her father at the circus in Los Angeles when she was four. Bobo was one of the world's most famous clowns, performing with the Shrine Circus, Pollack Brothers Circus and on the Ed Sullivan Show.

Raised by her mother, who was the first circus girl clown, Bonnie grew up in Glendale, Calif., feeling abandoned, lonely and unwanted. She resolved to find him in her quest for love and belonging.

She continued the search. She went to Baraboo, Wis., a circus center, and checked library clippings. She discovered that Bobo had been married three times. She discovered she had a half-brother named Delbert. At last, a relative said he heard Bobo might be going to the Mayo Clinic in Rochester, Minn.

For a year, she periodically called the Mayo Clinic and asked if Bobo was there.

One day the telephone operator asked: 'You mean Chester Barnett from Lovington, Illinois?'

Yes, he was in Lovington. Barnett took a train to Decatur, rented a car and drove though the snow to Lovington, 20 miles away.

Leonard Pearson opened the door. Bobo, who was 6 feet 3 and 240 pounds in his prime, had been worn away by time.

For Bonnie, it was a moment etched in memory. "I knew it was not too late," she said. He was 76. He walked with two canes.

During the next two years, they exchanged telephone calls. Bobo told Bonnie: "I do love you, I do care for you." Bonnie received letters and two packages with personal memorabilia.

Bobo died Feb. 18, 1985, sitting in his favorite chair, holding a Bible that Bonnie had sent him. The cemetery headstone has a photo of Bobo.

He said he chose to live in Lovington because his manager once lived there and he got a place to stay between shows. He also explained his connection to Leonard Pearson,

"Leonard is with me because I had him in my act for a while," Bobo told he. "His mom asked me if I would look after him when she died and I promised."

Bonnie lives in Durham, N.C. She has a daughter, Christiana, who came with her on this trip, and a son, Michael. She has an outpatient therapy practice and helps at-risk children and families living below the poverty level.

Before this trip, Bonnie went to Baraboo on Oct. 1 to see her father inducted into the International Clown Hall of Fame. Following the ceremony, people took turns attempting to fit into Bobo's small clown car. Bobo would squeeze into the car, along with seven dogs, a skunk, a horn and a collapsible suitcase. Bobo also had a famous dog trick, balancing a dog on his finger.

This is the second printing of Bonnie's book, She had it self-published and sold 900 copies. Then, in a house fire, the books were destroyed and the printers had destroyed the manuscript.

But she found a new publisher and carried on.

The Thursday announcement from the Macon County Health Department continued a streak of double-digit case counts this week.

Decatur police said a 3-month-old child was in the vehicle that was hit head-on Friday.

A house and car were hit by gunfire, but there were no reports of injuries; police say there was no obvious connection between the incidents.

Here's the tornado damage reported in Central Illinois on Tuesday

The worst damage from a storm system that swept through Central Illinois on Monday occurred in Sangamon County, but Macon County wasn't spared.

Police say a driver in a bar parking lot who failed sobriety tests had been convicted of previous DUI just a few months ago.

Even as the 2018 Macon County sheriff’s election between incumbent Tony Brown and challenger Jim Root remains unsettled, the focus could soon turn to 2022 as another familiar name appears to be eyeing the office.

Police said a Decatur woman, faced with her husband pleading with her not to take the car without him, ran him over with it instead.

Damage bill is estimated at $20,000; even a nearby tree was caught on fire.

A suspect was last seen fleeing south from the area of the James Millikin Homestead, authorities said.

Herald & Review/Kelly J. Huff Bonnie Barnett, daughter of the late Chester E. Barnett also known as Bobo the clown, prepares to lay the remains of Bobo's circus sidekick, Leonard Pearson, next to her father in Keller Cemetery near Lovington, in order to reunite the duo.