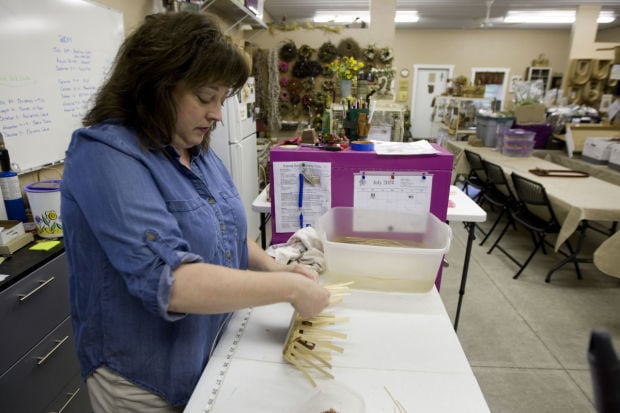 Bonnie Rideout of Bonnie's Baskets weaves a candle holder in her workshop. TOP: Rideout weaves one of the first layers of reed along the base of a candle holder. 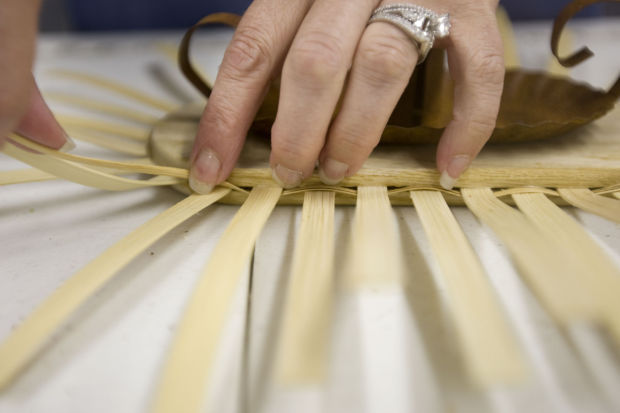 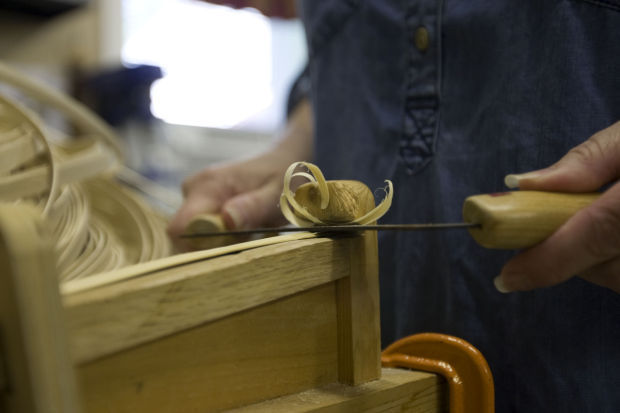 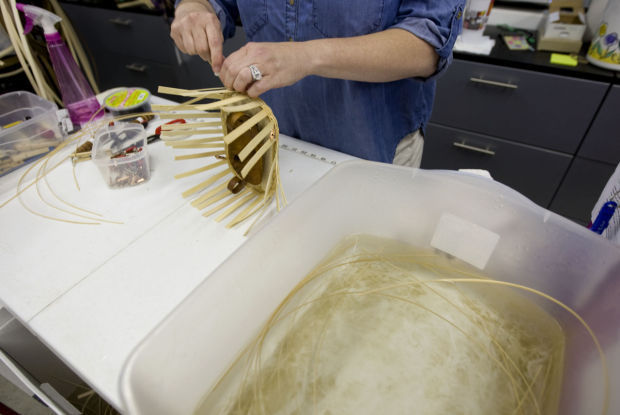 Reed soaks in a tub of warm water before Bonnie Rideout uses it to make a candle holder. Rideout soaks the reed before using it so it isn't as stiff. 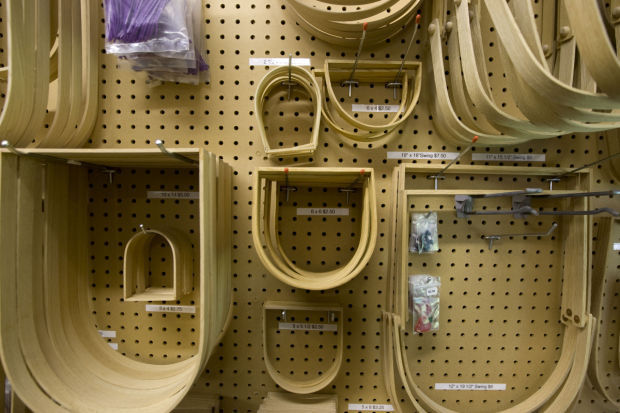 DECATUR – When trying to pinpoint the moment when a hobby becomes more than simply a hobby, erecting a new building on one's property just to hold arts and crafts supplies probably qualifies.

So it was for Decatur resident Bonnie Rideout last fall when she moved all of her basket-weaving supplies from her basement to the newly constructed pole barn out back.

Rideout's passion for basketry has kept her busy for almost 20 years now, and for eight of those years it's been a full-time job, as the titular founder of Bonnie's Baskets.

“When the baskets completely took over my house, then I knew it was time to build this space,” said Rideout, gesturing around the building, which contains a retail shop, work space and shelf after shelf of crafting materials. “The basement looked like this, just a mess and with a constant threat of flooding. The water was a total nightmare. I lost almost everything one year, and I thought 'never again.' ”

Rideout's family contains a history of artists, as she recalls her grandmother, a commercial artist who provided airbrushed movie posters for the Lincoln Square Theatre. The now master basket weaver said she dabbled in “nearly every form of art” at some point before finding her passion in weaving. Now she lives for it: At one point, she even owned a Volkswagen Beetle with the license plate “BSKTBUG.”

“I just love grabbing a pile of something and creating, whether it's out of leather, yarn, ribbons or reeds,” she said. “I like when someone purchases a piece, and it's clear they can really see and appreciate the artwork of weaving. It's the art shows where people really appreciate it the most, which is why Arts in Central Park here is one of my favorites.”

Indeed, Rideout is just one member of a larger weaving community, although few have access to her wealth of materials or have a dedicated building. The local “basket guild” averages 45 members and meets every other month in her studio space, which has also been built to act as a hobby shop and training space for new weavers. To local weaving enthusiasts, the physical Bonnie's Baskets location is one of the only places they can shop for such materials in Central Illinois.

“Most people don't realize this exists at all, or that the community is here,” she said. “My current husband was shocked there were other weavers out there like me, but now he comes to the conventions. Believe it or not, there is such a thing as basket conventions.”

Like most experts, Rideout eventually moved into teaching, despite initial anxiety. Starting out with teaching common and popular designs, she now focuses entirely on her own, self-created designs and kits with students. No longer shy about helping others learn, she called teaching one of the most satisfying aspects of the hobby.

“It's fun, especially with the new weavers, because there are people who don't think they could ever do this sort of craft in a million years,” she said. “And they're so shocked when they class is over and they've got a basket in their hands.”

Connie Shively is one of those crafters, a relative newcomer who started learning to weave baskets with Rideout in the fall. She was particularly surprised by how fast one can make progress, which helps with motivation.

“You get to see what you're accomplishing right away,” Shively said. “It's not like knitting or crocheting where it can take months. I expected it would take three or four trips at least, but most of the time you come out of a workshop with a finished product. For me, the weaving is just very relaxing and enjoyable.”

Likewise for Decatur resident Jill Koehler, who started attending the weaving classes around the same time. She now enjoys giving baskets to friends and family as gifts, and spoke highly of Rideout's skills as a teacher.

“She's very patient, kind and informative, and of course, knowledgeable,” she said. “Her workshop is wonderful. You go there and say, 'Wow, this is really nice; this woman really loves to weave baskets.'”

That is undoubtedly an understatement. Rideout regrets that she never kept a running tally on all the pieces she's created since the 1990s, but they would number into the thousands. In the one year she did keep track, she created 300 baskets from scratch, not to mention selling basket kits, accompaniments and various knick-knacks. Today she continues to take orders via the Bonnie's Basket Facebook page and by in-person visits to the shop at meetings and workshops. One has to wonder what would happen if she ever seriously took up a second hobby.

“I need to win the lottery so I can build a second building for crafts out here,” she joked. “I swear I didn't build this one big enough, but no matter how big it was I probably would have filled it up with baskets.”

City officials are seeking to regulate how residents can grow native prairie grasses on their properties, aiming to allow those plantings without bringing unwanted wildlife and other problems into neighborhoods.

Lieutenants Kenesa and Shanell Debela were confronted by a very unpleasant sight as they arrived at Decatur’s downtown Salvation Army Headquarters Sunday morning: a 7-foot-tall window by the front door had been smashed to pieces, and it was no accident.

“I’ve lived here 47 years and I’ve never seen anything like the fireworks going off Saturday night. Just the sheer volume: I don’t know if it was because of the pandemic and everyone was just ready to get out and celebrate or an increase in fireworks availability," said Wade Watson, a battalion chief with the Decatur Fire Department.

“I’m trying to be a tough old bird,” he said. “I’m hanging in there,” said 77-year-old Terry Lidy, one of the 39 Fair Havens Senior Living residents who tested positive for coronavirus.

Police said a Decatur man needed hospital treatment early Saturday after a bottle was broken over his head during a fight on the grounds of the downtown Masonic Temple.

Fireworks possible cause of fire that destroyed vacant Decatur home

Decatur firefighters arrived to find building engulfed in flames and extending to a neighboring home, prompting additional firefighters being called to the scene, the release states.

Police said he also is suspected of hurling a brick through the front doors of the Decatur Civic Center Saturday night.

These Macon County highways are getting work starting Monday

Decatur Fire Department were called to a residential fire Wednesday afternoon in the 1000 block of W. Mound Road

A recount of the Macon County sheriff's race starts tomorrow. Here's what to expect.

Nearly two years after voters went to the polls, a recount is set to begin Tuesday on ballots cast during the 2018 Macon County race for sheriff.

Bonnie Rideout of Bonnie's Baskets weaves a candle holder in her workshop. TOP: Rideout weaves one of the first layers of reed along the base of a candle holder.

Reed soaks in a tub of warm water before Bonnie Rideout uses it to make a candle holder. Rideout soaks the reed before using it so it isn't as stiff.