The U.S. attorney general’s office asked a federal court to undo the state’s Thursday venue change in Xenia Rep. Darren Bailey’s case from downstate Clay County to the federal district courthouse in East St. Louis. Or, if the court declines to do that, federal authorities urged it to rule in favor of Bailey.

Hours before the attorneys were due to respond to Bailey’s request for Clay County Circuit Court Judge Michael McHaney to rule on his case, and one day before a hearing was set, the Illinois attorney general’s office moved the case.

Thomas Verticchio, senior attorney general, wrote in the office’s notice that Bailey alleged Pritzker’s stay-at-home and disaster proclamations violated his rights to religion, due process, interstate travel and “a Republican form of government” which are guaranteed by the U.S. Constitution. 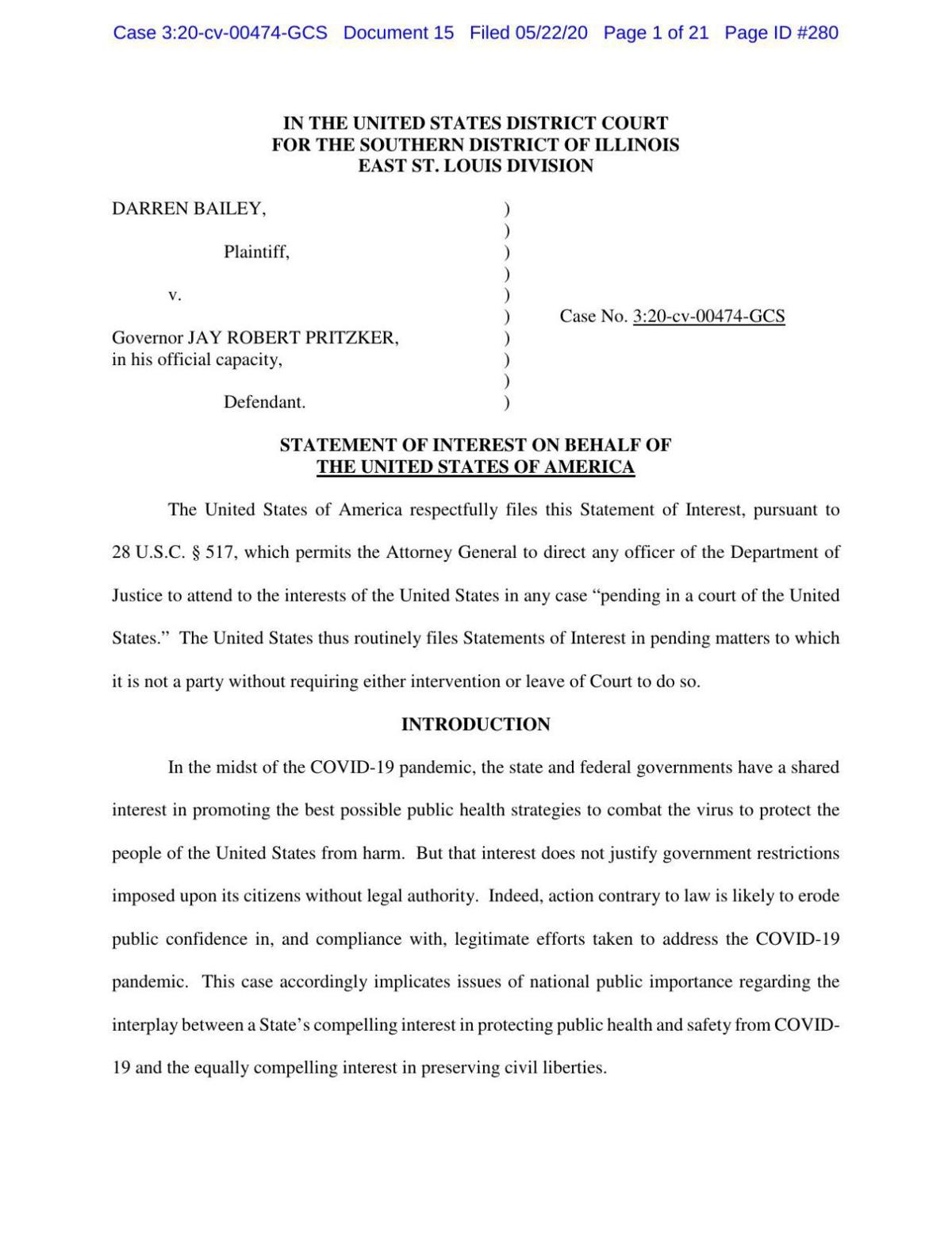 Bailey’s attorneys called that action an effort to “judge shop.”

Five U.S. lawyers wrote in a 21-page filing Friday that the federal government does not “typically” get involved in cases challenging abuse of state law. But Bailey’s representatives, they continued, argued “a strong case” that Pritzker’s COVID-19 executive orders overstepped the emergency powers granted to him by the Illinois Emergency Management Agency Act.

“The orders at issue are not only of critical importance to the people of Illinois, they implicate a broader national issue about constitutional rights in the time of a pandemic,” they wrote in the document.

That overtone is not enough to warrant a federal court weighing in on Bailey’s case, though, the U.S. attorneys wrote. While the state “may conceive” of arguments that Pritzker’s actions violated the U.S. constitution, the lawsuit does not make any such allegations, they added, and Bailey “seems surprised to learn he might be implying” that.

Thomas DeVore, the representative’s lawyer, long alleged the IEMA Act defines a disaster as existing only if there is a threat that requires emergency action to avoid. According to multiple court filings, the law does not allow a governor to issue successful 30-day disaster proclamations.

The U.S. attorneys agreed, adding in their statement of interest that “it is not clear from the face of the act from where the governor derived his authority” to do so.

“The (U.S.) Constitution does not hobble states from taking necessary, temporary measures to meet a genuine emergency,” they wrote in the document. “...A pandemic does not excuse a state from following its own law governing procedures to protect the public health.”

If a court — federal or county — finds that Pritzker overstepped his authority, “real questions” must be asked “about whether the people of Illinois have been deprived of their liberties with (a) constitutionally adequate process,” the lawyers asserted in the document.

Any claims the governor violated the U.S. Constitution “likely” would be filed in a new lawsuit, not included in Bailey’s current case, they added.

A spokesperson for the Illinois attorney general’s office did not return a request for comment.

Bailey, in a text message, said he is “very pleased” the U.S. attorney general’s office took an interest in his case. He added, “justice is coming.”

Depending on whom you ask, salons that offer hair extensions can open in Illinois despite Gov. J.B. Pritzker’s stay-at-home order. Those that …

Cerro Gordo bar reopens; owner does not plan to close

DeWitt-Piatt Bi-County Health Department officials said they are looking into the matter.

The state has stopped providing total numbers of novel coronavirus cases and deaths linked to long-term care facilities in Illinois, instead d…

5 updates: The latest on coronavirus and Illinois for Saturday

Here's a look at what's happening with coronavirus developments in Illinois for today, Friday, May 15.