Updated 6:45 p.m. DECATUR — Charles B. Palmer, 62, was arrested 18 years, two months and one day ago for the murder of 32-year-old Decatur attorney William Helmbacher in his westside apartment.

He has been in custody since then, first in the Macon County Jail while awaiting trial, followed by 16½ years in the Illinois Department of Corrections.

During all of that time, Palmer knew that he was innocent.

His family members also believed he was innocent, including Deborah Palmer, 63, who married him while he was in prison, lawyers and students with the Illinois Innocence Project and Fonda Robbins, a paralegal who fought for him for 13 years.

They were all in Circuit Judge Timothy Steadman's courtroom Wednesday afternoon. A rumor had it that Palmer might be set free.

As Charles Palmer stood at the defense table Wednesday afternoon, dressed in a navy blue sweatshirt over a white T-shirt, his hands in front of his face as in prayer, he did not know how the judge would rule.

“The defendant will be released from custody,” Steadman said, at the end of a short hearing.

Sitting in the front row of the packed gallery, Deborah Palmer shouted out an expression of joy and relief when she heard Steadman's pronouncement. Someone exclaimed “Praise Jesus,” as other relatives and supporters sobbed and hugged.

“It's just wonderful. Look at my family and my extended family,” Palmer said, shortly after Steadman said the words Palmer had been dreaming of hearing since his wrongful arrest in 1998 and subsequent conviction. “I'm way up there right now. Just give me a chance to come down.”

Deborah Palmer, who has been acquainted with Charles since the early 1990s, enlisted the help of Robbins in 2003, who subsequently persuaded lawyers at the Springfield-based Innocence Project to take his case.

“I hollered because I was so excited,” said Deborah Palmer, a Bloomington resident who hadn't seen her husband for about a year, because of financial challenges in traveling to the Galesburg prison. “All I could do was cry. It's been a long, long time.”

After the Illinois Innocence Project had evidence tested that showed Palmer was not the man whose DNA was found beneath the murder victim's fingernails and in hair found in his hands, Palmer's conviction was vacated Nov. 16. A new trial was granted.

A hearing had been slated for 1:15 p.m. Wednesday to determine whether Palmer's bond would be reduced, in order for him to be released before standing trial once again on the murder charge.

But the state's attorney's office heard Tuesday that a Decatur police detective investigating the case again finally tracked down Ray Taylor, 53, the main prosecution witness at Palmer's 2000 trial. Taylor told the detective he would not testify against his cousin again.

State's Attorney Jay Scott and his assistants decided they no longer had sufficient evidence for a retrial.

At the hearing, Assistant State's Attorney Jane Foster told the court that because the state could no longer meet its burden of proof for a conviction, she was asking for the case to be dismissed. Foster, who was hired in Decatur office Sept. 1, has been working on this case since she settled into her job.

“The court will allow the motion,” Steadman said. “The remaining issue is notifying the Department of Corrections that the sentence will be vacated.”

The original prosecutors on the case were Scott Rueter and Tammara Wagoner, then both assistant state's attorneys. Rueter went on to win election as state attorney later in 2000, served one term, and is now an assistant public defender. Wagoner remained on the case until she resigned from the state's attorney's office in July. Foster, a former first assistant in the McLean County State's Attorney's Office, replaced Wagoner in September.

Palmer's trial defense attorneys were James Coryell, now an associate Macon County judge, and Brad Rau, a private attorney who was hired to help Palmer with his capital murder case.

The state's case in 2000 was based largely Taylor's testimony. He told the jurors that Palmer had told him, “I had to beat that dude to death.” The other incriminating evidence was drops of blood found on Palmer's tennis shoes. A crime lab concluded that was the victim's blood. Palmer had prior convictions for dealing and possessing narcotics, as well as retail theft.

Palmer testified that he was elsewhere at the time of the murder and had not ever been in Helmbacher's apartment. He said someone might have borrowed his shoes.

It is now believed by prosecutors that Taylor used Palmer as a scapegoat, after he was charged with burglarizing Helmbacher's apartment the day before the murder. Taylor's fingerprints were found on a bag that contained Helmbacher's belongings, including his business cards, on the grounds of James Millikin Homestead. Taylor, who had multiple prior felony convictions, had the burglary charge dismissed after testifying against Palmer.

Taylor was also excluded by DNA evidence as the man whose skin cells and hair were found on the victim.

“The totality of the evidence in this case shows that another person was involved in the physical attack upon William Helmbacher, which led to his death,” Jay Scott said in a news release. “For that reason, justice demands that the case against Charles B. Palmer be dismissed.”

Wednesday afternoon Palmer walked out of the Macon County Law Enforcement Center, bent down and kissed the rain-soaked sidewalk, walked halfway across Franklin Street, then got down on his hands and knees and kissed the pavement.

As his family members and supporters walked out onto the sidewalk behind him, they sang softly a hymn with the repeating line, “I'm free.”

The brutal slaying of Helmbacher occurred on Aug. 27, 1998, in his apartment at 351 W. Macon St. He was struck at least 13 times in the head and neck with a claw hammer, according to police records.

Helmbacher, a Decatur attorney with roots in Effingham county, was partly employed collecting rents from tenants in the building he occupied, as well as other buildings owned by the same landlord. Taylor lived in the same building.

Palmer was arrested Sept. 22, 1998. He was transferred to the Illinois Department of Corrections after his conviction by a jury on April 27, 2000.

He was eligible for the death penalty, but Circuit Judge Jerry L. Patton ruled at his sentence hearing on May 8, 2000, that he would not sentence him to death. He did not give an explanation for his decision, according to a news article.

In a brief interview at his sister's northside house following his release, Charles Palmer said he is not bitter toward anyone.

Deborah Palmer said her husband will live with her at her residence in Bloomington.

“This is a wonderful day for us, for the family. It's the best Thanksgiving I've ever had in my life,” she said. “He's finally coming home, and I thank God for that.”

Original story 1:20 p.m. DECATUR — Charles B. Palmer, 62, was convicted of murdering Decatur attorney William Helmbacher in 2000 and sentenced to life in prison.

Palmer was released from custody Wednesday afternoon, after prosecutors received DNA evidence that excluded him as the male whose hair was found in Helmbacher's hand and skin cells beneath his fingernails.

A Decatur police investigation showed that the key witness in the original case, Ray Taylor, 53, is no longer willing to testify against Palmer.

Palmer was arrested on Sept. 22, 1998 and has been held in custody since then. He was transferred to the Illinois Department of Corrections after his conviction by a jury on April 27, 2000.

A motion for a new trial was filed Oct. 11, 2016, by John J. Hanlon of the Illinois Innocence Project. A new trial was being considered by prosecutors up until the time the police investigation showed that Taylor wouldn't testify again.

Palmer has had an exemplary disciplinary record since his incarceration in prison. He recently has been housed in the Hill Correctional Center, a medium security prison, which is unusual for someone convicted of first-degree murder.

Helmbacher was the victim of a burglary the night before he was slain. Taylor, who had multiple prior felony convictions and lived in the same building, was arrested and charged with the burglary. After he gave testimony against Palmer, his cousin, the case was dismissed against him.

Taylor's testimony, that Palmer confessed to killing Helmbacher, was the most significant evidence against Palmer.

In addition, drops of blood connected to Helmbacher by DNA testing were found on Palmer's shoe. Palmer testified that someone might have borrowed his shoe.

Palmer was eligible for the death penalty, but Circuit Judge Jerry L. Patton ruled at his sentencing hearing on May 8, 2000, that he would not sentence him to death. He did not give an explanation for his decision, according to a news article.

2016's most read stories on Herald-Review.com

Millikin University football, Illini hoops and a missing girl are just a few topics of our ten most read stories on 2016.

DECATUR – Angel Gonzalez, 41, released from Dixon Correctional Center in March, is the eighth person the Illinois Innocence Project has helped…

DECATUR – Jane Foster spent the first 11 years of her career as a prosecutor, but after she lost an election for state's attorney, she spent f… 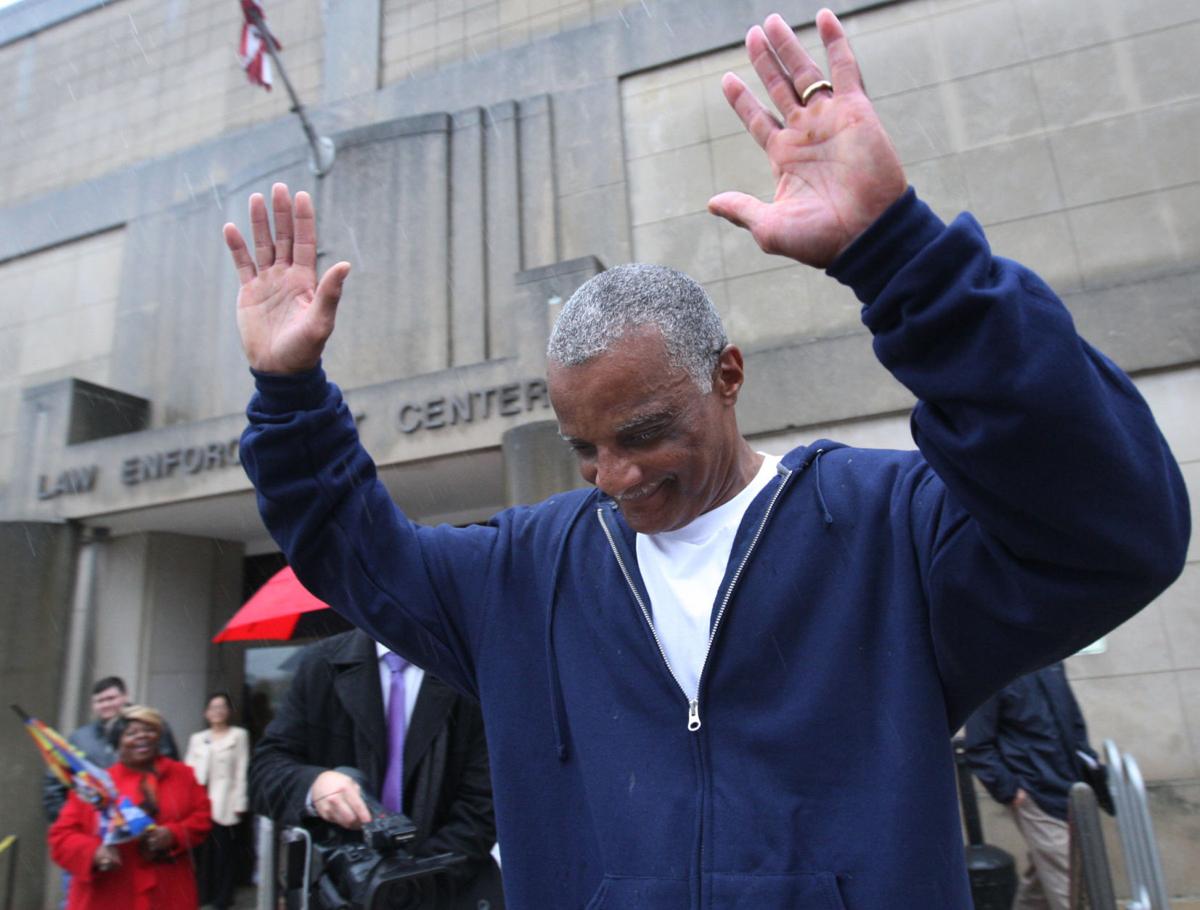 Charles Palmer raises his hands while taking his first steps outside of the Macon County Law Enforcement Center after being released after 18 years in prison following a wrongful murder conviction. 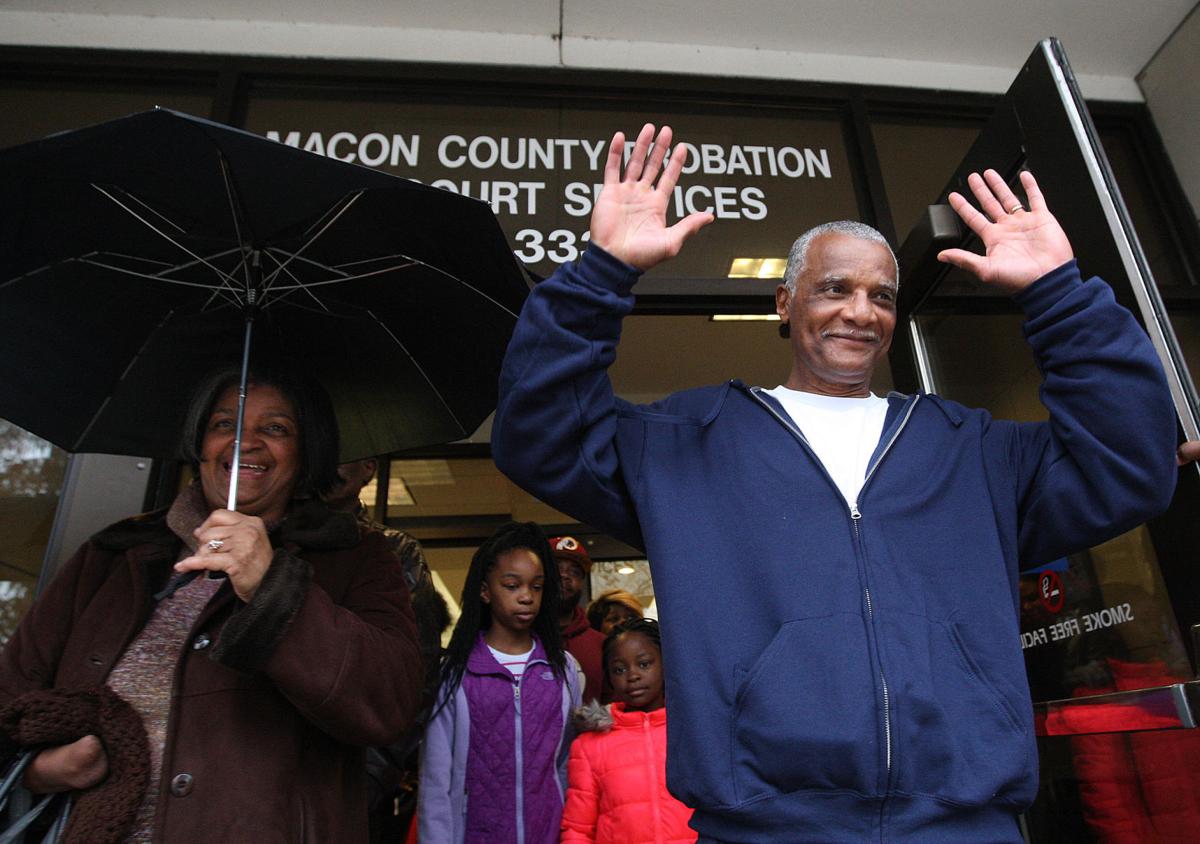 Charles Palmer, right, celebrates after being released from custody Wednesday. He was accompanied by his wife, Deborah, grandchildren and other family and supporters. 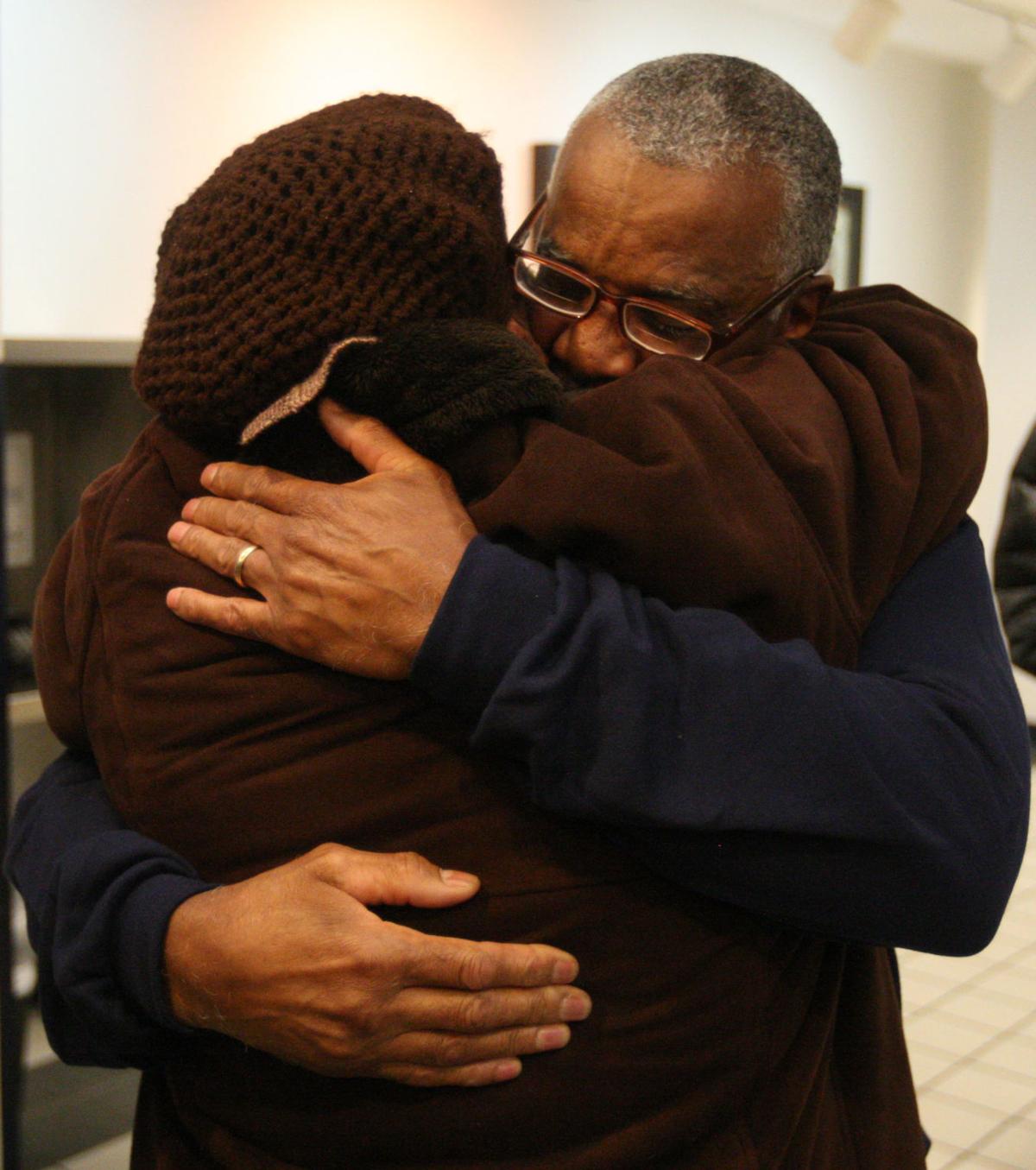 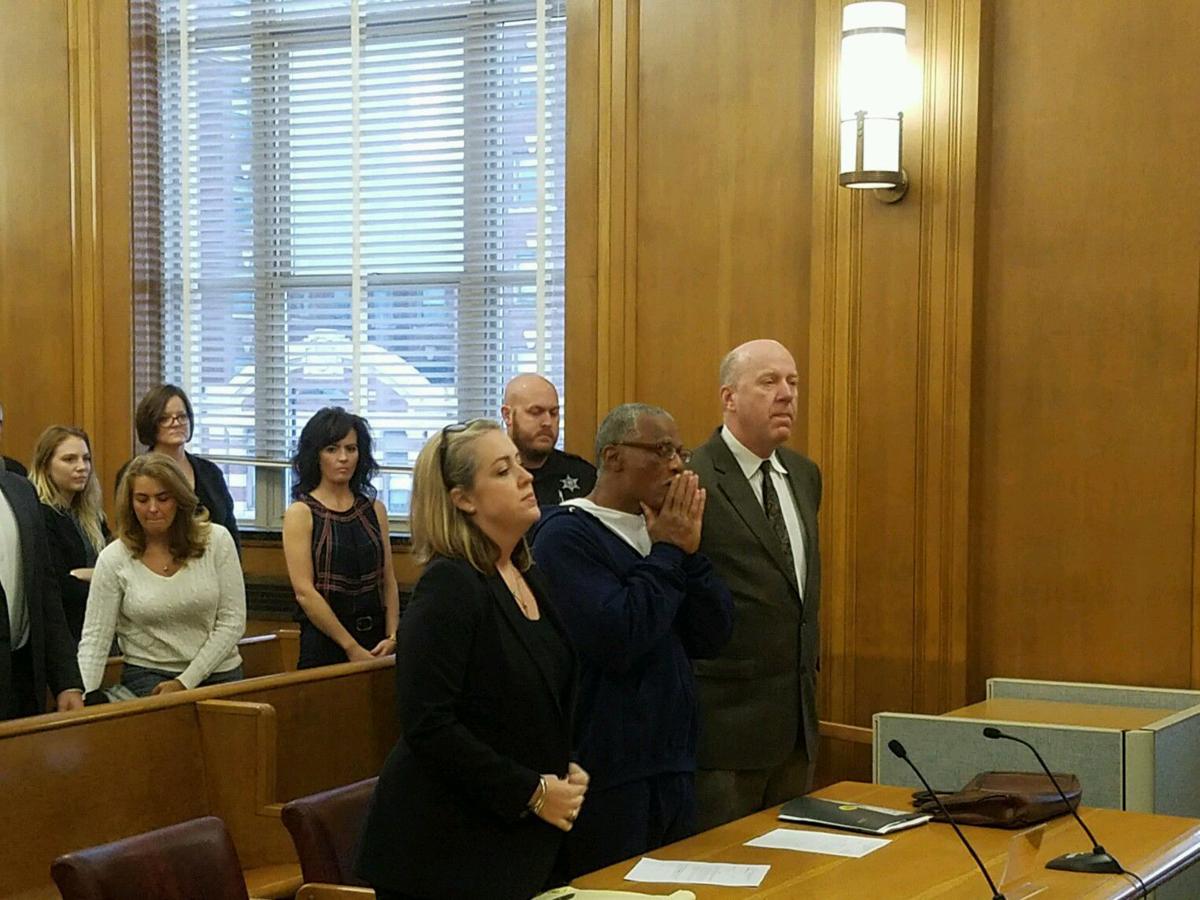 Charles Palmer awaits nervously in Macon County Circuit Court before the judge pronounces that his charges are dismissed. He is flanked by attorneys Lauren Kaeseberg and John Hanlon of the Illinois Innocence Project. 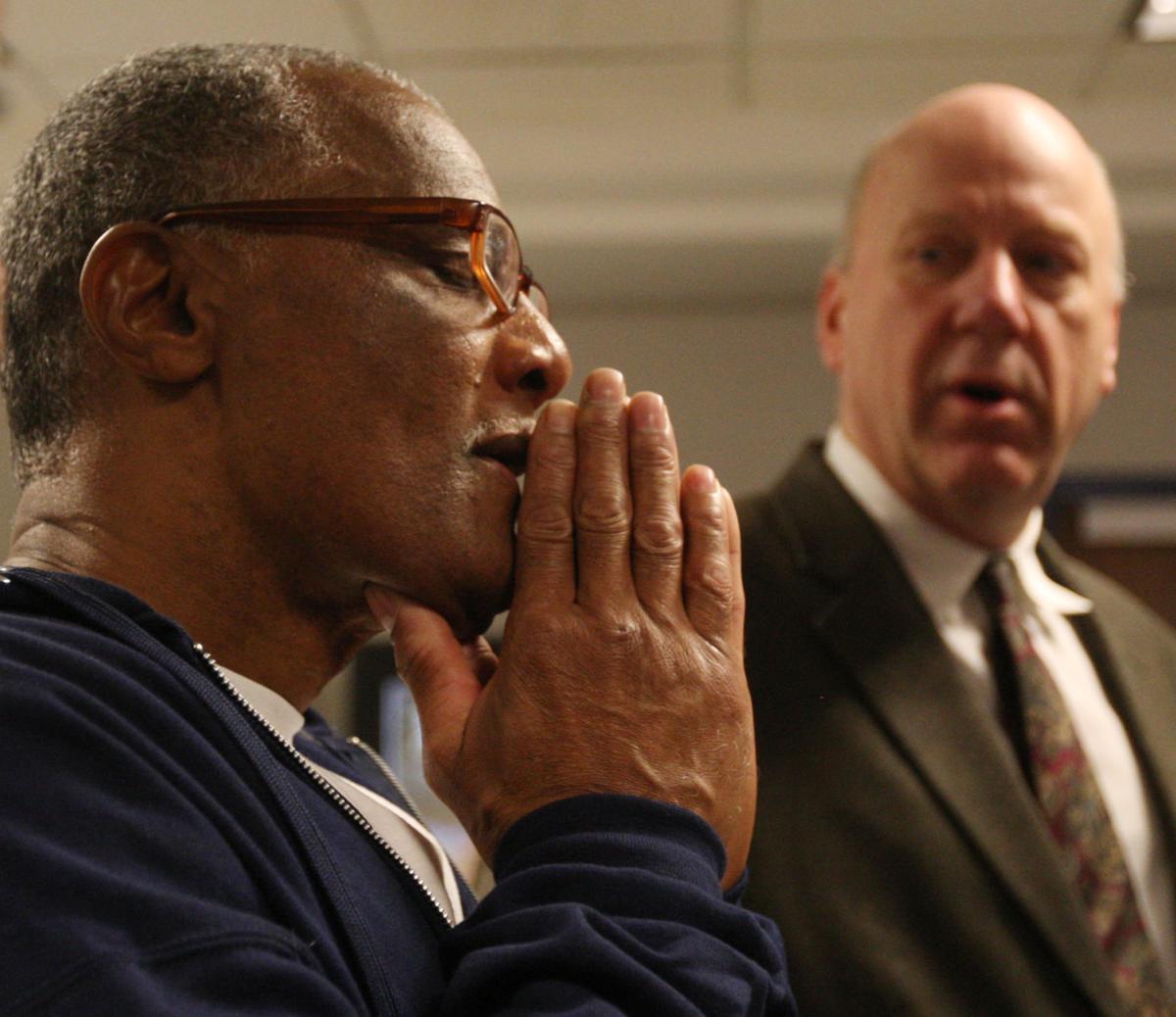 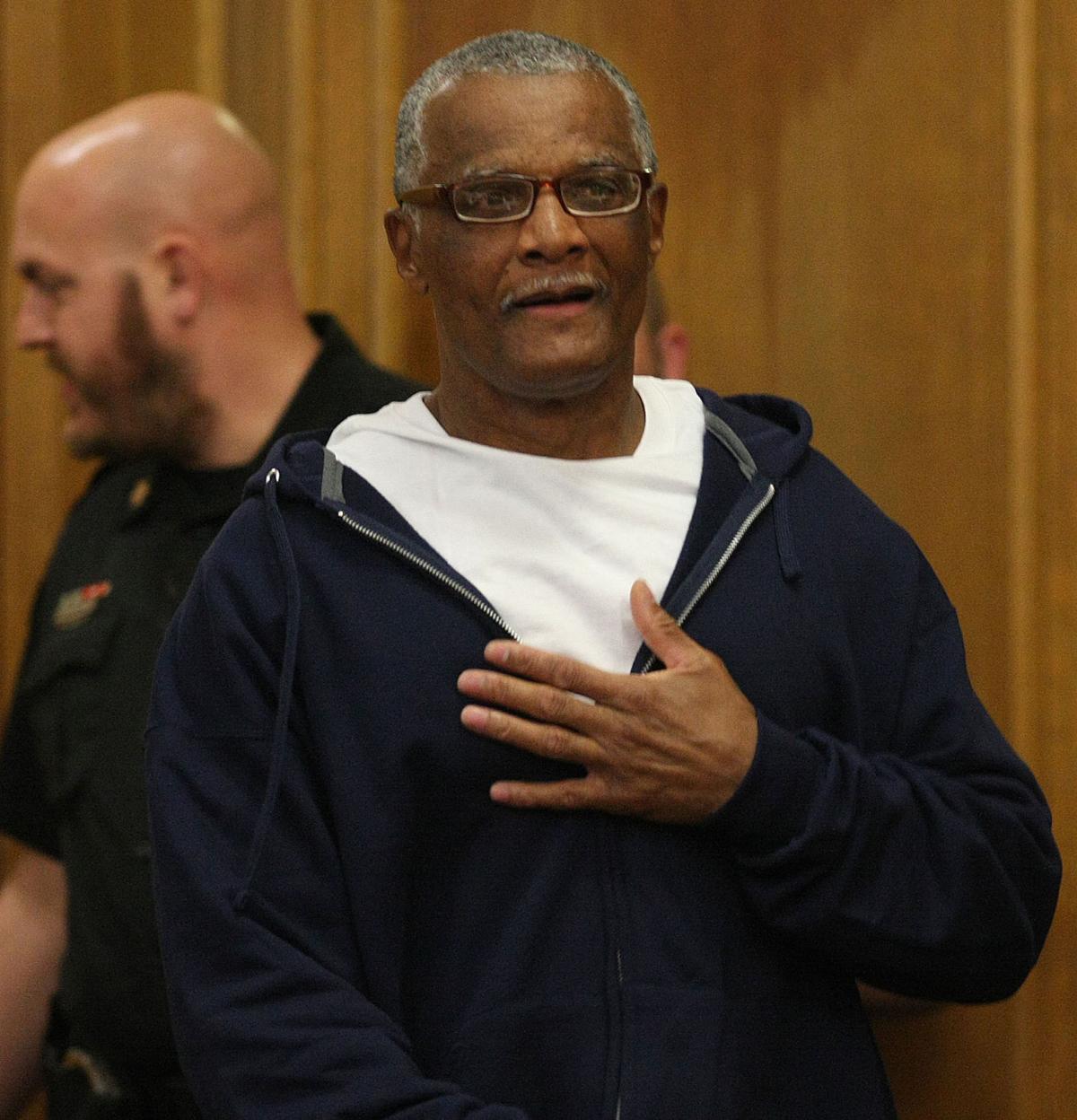 Charles Palmer enters a courtroom at the Macon County Courts Facility to be released after serving 18 years in custody for a wrongful murder conviction. 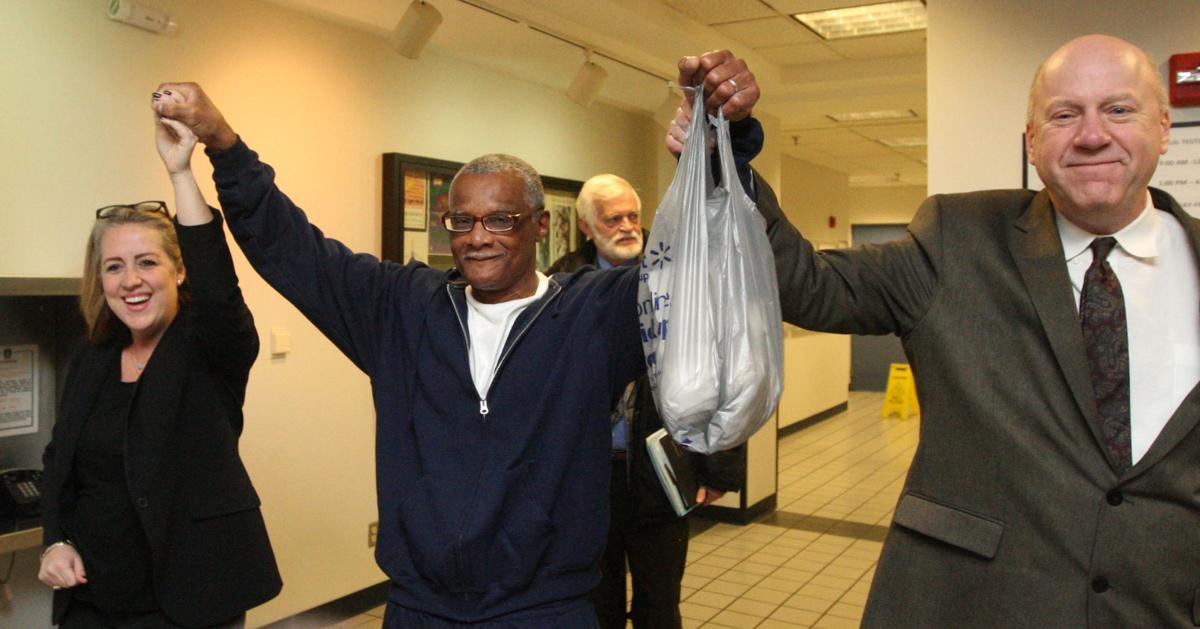