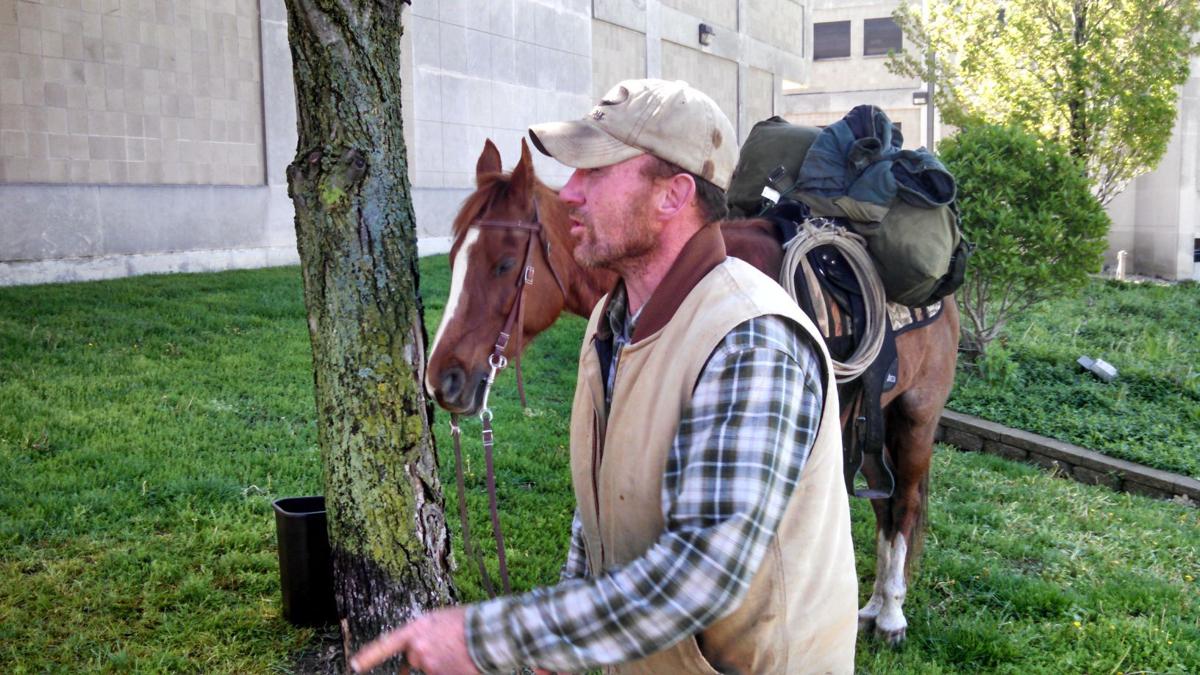 Ronald Blalock II traveled on horseback from LeRoy to Decatur to attend a morning hearing at the Macon County Courts Facility. 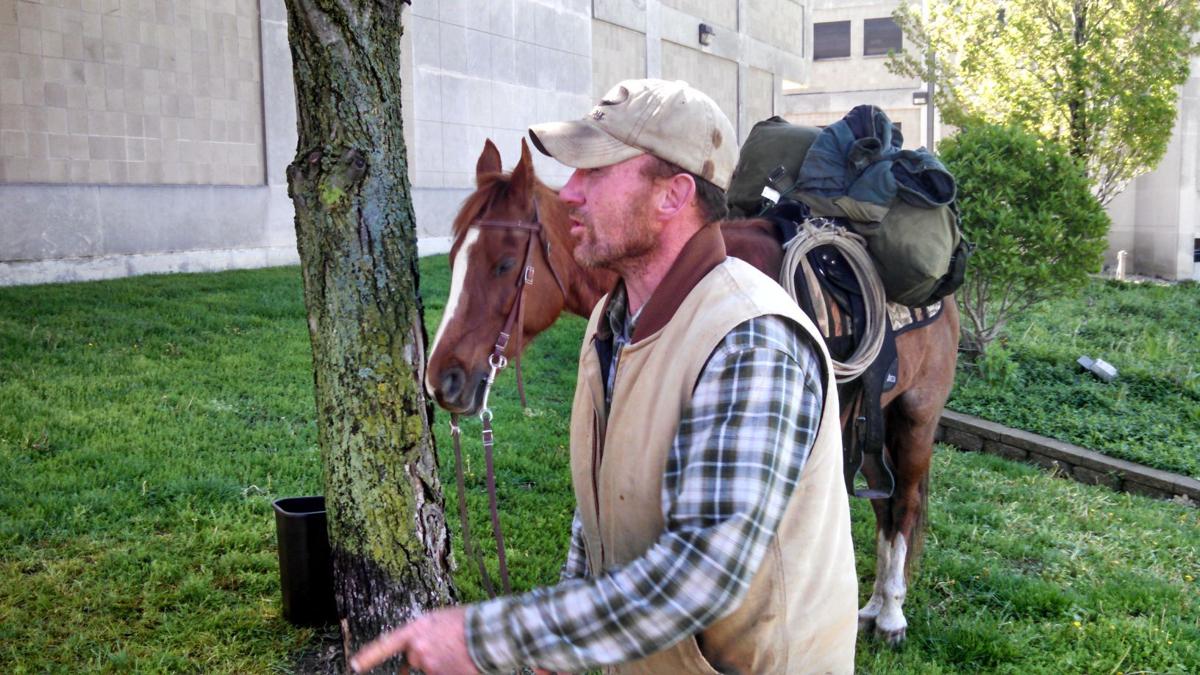 Ronald Blalock II leaves his horse, Rooster, on the grounds of the the Macon County Courts Complex in Decatur on Thursday to attend a court hearing. Having a suspended driver's license, Blalock rode Rooster to make the court date.

DECATUR — After missing a series of previously scheduled court appearances in Decatur, a Normal man came up with an old-fashioned way to make sure he was there Thursday for his latest one.

Ronald Blalock II rode horseback from LeRoy to arrive with plenty of time to spare for a morning hearing at the Macon County Courts Facility.

The horse waited on the lawn outside while Blalock, 38, went inside for a bond hearing stemming from charges of driving on a suspended driver's license.

Blalock didn't think he would receive a welcome reception while in Decatur with the horse, which is named Rooster, based on a character in a John Wayne movie. However, Blalock said everyone he encountered, from security officers to the judge and assistant state's attorney, were friendly.

“I thought I'd be in trouble,” Blalock said. “Now I know they won't be so hard if you show up.”

With family living out of state and friends from the area at work, Blalock didn't have anyone who could drive him to Decatur. Blalock, who has worked as a truck driver, has been without his driver's license for nearly four months, he said.

So he decided to make the trip from a farm near LeRoy with Rooster, who only has one good eye, which Blalock said raises his other senses, such as hearing.

They set out about 11:30 a.m. Wednesday, arriving in Forsyth about 9:45 p.m. for a stop at McDonald's and to rest overnight. While there, Blalock ate a quarter-pounder and Rooster enjoyed munching on the lawn along with some sliced apples from the restaurant.

The journey didn't go entirely smoothly, as the pair encountered heavy rain and lightning. Blalock brought a sack with supplies to protect them from the elements, but he still got wet while pitching a tarp. The Tennessee Walking Horse didn't seem to mind, though, as Blalock said Rooster lay on the ground, tired from the long walk.

Making it through the night and remaining determined to resolve his legal matters, Blalock left Forsyth about 6 a.m. Thursday and walked alongside the horse through town, thinking he needed to be at the courthouse by 8:30 a.m. He found out he was early, as the hearing wasn't supposed to happen until 10 a.m. but it was able to proceed ahead of schedule.

Meanwhile, Rooster was drawing attention while tied to a tree on the lawn outside and enjoying a shady spot to eat some of the grass and weeds. Curious courthouse staff and visitors entering the building took photos, with some starting to catch attention on Facebook.

Michael Tarczan, an investigator with the Macon County Public Defender's Office, watched from his office window, waiting for Blalock to return outside. Tarczan told him that the innovative approach to appearing for a court date should be an inspiration to others.

“It can be a lesson,” Tarczan said. “Some guys can't seem to make it, and they live two blocks away.”

Blalock decided to do what was necessary as he tries to get his driver's license back. He still needs to take care of issues in McLean County before he will be able to do so, but he was relieved to have the matter resolved in Macon County.

Blalock was ordered to pay a fine, plus court costs, as the case was closed.

Blalock didn't mind spending the time with Rooster, who he's been riding for three years.

The pair planned to return to LeRoy by today, likely spending another night camping out. Blalock looked up at the clearing sky, hopeful that the weather will be better for the return trip.

20 of the strangest, and most popular, crime stories from the archives

Here are 20 of the "weirdest" crime stories from the Herald & Review. The list is generated from audience response (pageviews) on herald-r…

DECATUR – For a champion with high-octane pedigree blood coursing through his veins, “Finn” the Bichon Frise is one pretty laid-back dog.

DECATUR — Bill Faber is looking back with fond memories of Senorita, a horse that became known to the community through promotions for his law…

Ronald Blalock II traveled on horseback from LeRoy to Decatur to attend a morning hearing at the Macon County Courts Facility.

Ronald Blalock II leaves his horse, Rooster, on the grounds of the the Macon County Courts Complex in Decatur on Thursday to attend a court hearing. Having a suspended driver's license, Blalock rode Rooster to make the court date.