DECATUR — Police said they are seeking Cody M. Burries, 29, on a warrant charging him with first-degree murder in connection with the shooting death of Marcel Whitfield, 32, of Decatur, who died April 7 after being shot twice in the parking lot of a Decatur bar.

Whitfield was shot in the chest and thigh in the early hours of April 7 and died at 7:45 p.m. at Decatur Memorial Hospital, Macon County Coroner Michael E. Day said. Whitfield had surgery and was moved to the cardiovascular unit where he suddenly went into full arrest and was pronounced dead after lengthy resuscitation efforts, Day said. 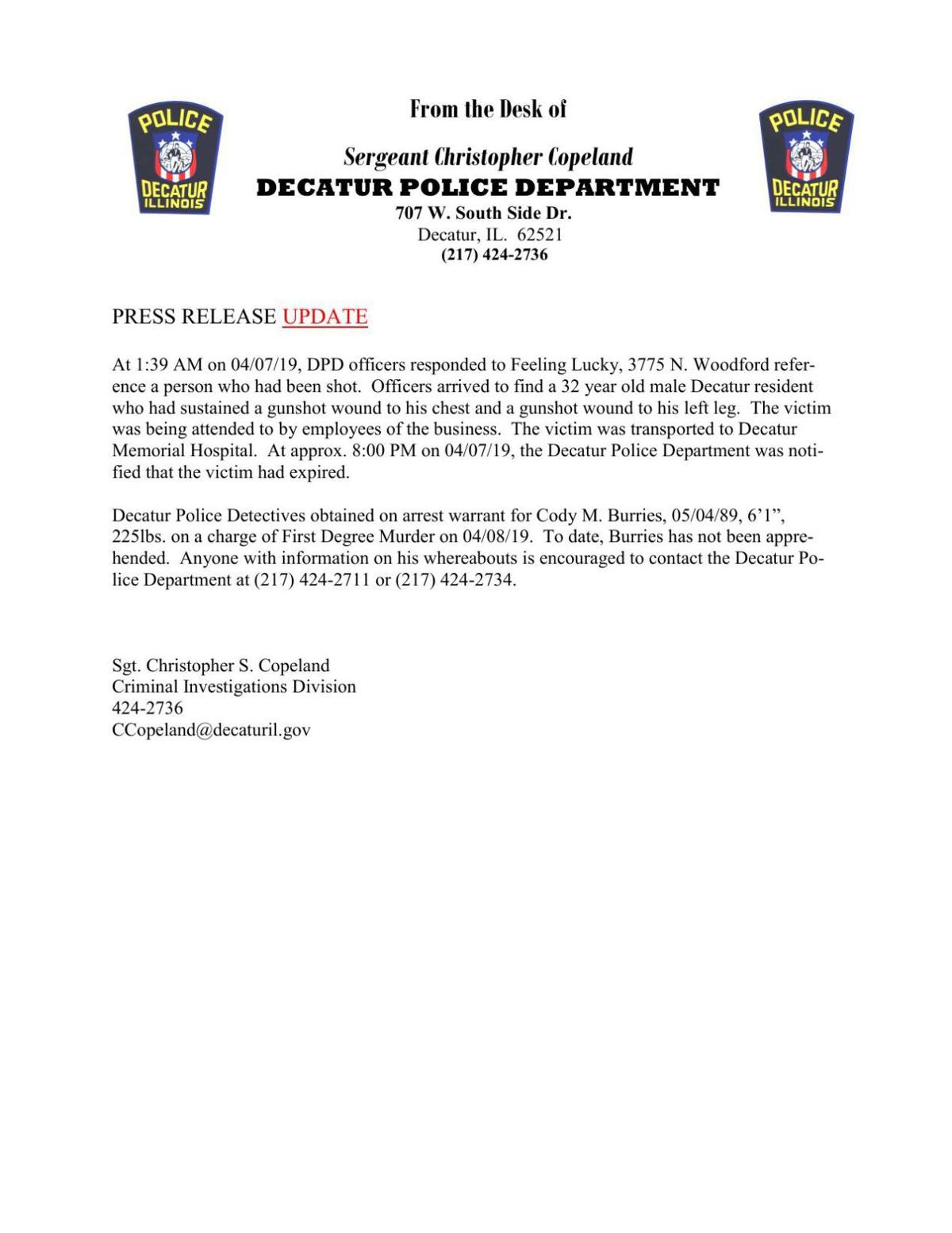 TOWER HILL— A 34-year-old Edgewood woman was killed in a two-vehicle collision in Shelby County at 7:46 p.m. Sunday, the Illinois State Police said.

Police: Woman steals more than $1,100 in goods from Walmart, flees in Mercedes

DECATUR — Police are searching for a woman they say stole more than $1,100 worth of merchandise Sunday afternoon from the Walmart Supercenter …

DECATUR — Police are investigating after two Decatur vehicles were damaged by vandalism in two days.

For 17th year, Decatur couple rises to the challenge of helping the needy at Easter

DECATUR — There’s still no place like home but, for those without one of their own, food with the taste of a good home-cooked meal can go a lo…

DECATUR — A pair of burglars who targeted rural Decatur properties and stole $11,000 worth of tools and other items have been arrested, the Ma…

DECATUR — A 34-year-old man who police say was found with a stolen, loaded 9 mm handgun was arrested around 1 a.m. Monday during a traffic sto…

DECATUR — Police on Tuesday said an arrest has been made in the shooting of two men April 18 in Decatur.

DECATUR — Police said a man who had a stolen TV in the back of his impounded car now faces a residential burglary charge after being arrested Monday.

Man arrested after police find crack, pistol inside his home with unattended child

DECATUR — A 32-year-old man was arrested after he left his 2-year-old child at home alone while 40 grams of crack cocaine, digital scales and …

DECATUR — Cody M. Burries, 29, was arrested in Tiptonville, Tennessee, on Wednesday on a warrant accusing him of first-degree murder in the Ap…

DECATUR — The Feeling Lucky Lounge & Package in Decatur believes its name has been coming up snake eyes for too long.

Cody M. Burries admitted to inflicting the fatal gunshot wound on a victim in the parking lot of a Decatur bar more than a year ago.