Biden: Budget talks hit 'stalemate,' $3.5T may take a while

DECATUR — In the aftermath of a shooting that killed a 12-year-old Decatur boy, police Chief Jim Getz on Tuesday challenged gun owners to take responsibility for firearms in their homes.

“Not addressing one of your family members who is involved in this type of activity is inexcusable,” Getz wrote in a statement on the department’s Facebook page. “There has been numerous arrest of juveniles with guns, but we still have some parents or guardians who will not check to make sure their kid is not involved in this activity or they just turn a blind eye to what their child is doing.

“You can be friends with your kids when they are grown but being a parent must come first.” 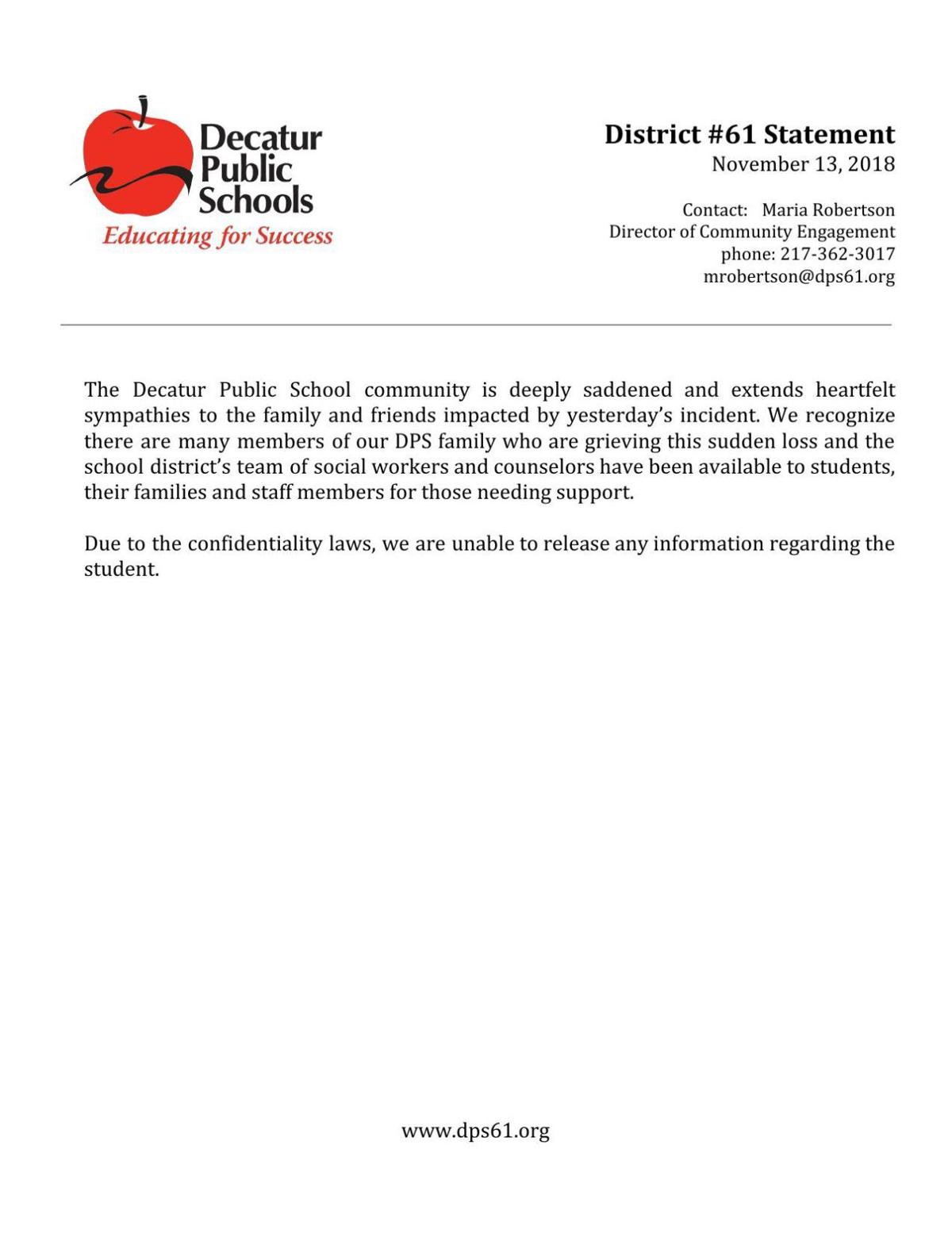 The remarks came shortly after police released details in the shooting that killed 12-year-old Marqueius N. Gray. He was pronounced dead at 7:12 p.m. Monday in the surgery unit at Decatur Memorial Hospital, where he was undergoing surgery after being shot, Macon County Coroner Michael Day said in a statement.

Arrested in the shooting was 20-year-old Avante Flesch, who told police that the shooting was an accident, according to a sworn affidavit released Tuesday. Flesch was arrested Monday and booked into the Macon County Jail on a preliminary charge of involuntary manslaughter in the shooting, which took place around 5 p.m. Monday at a residence in the 1100 block of North Main Street. Preliminary charges are subject to review by the Macon County State's Attorney's Office.

Police interviewed several witnesses, including relatives of Marqueius and one juvenile, who had been present at the time and identified Flesch as the shooter. The juvenile also told police that Flesch accidentally fired the gun, according to the affidavit.

Detectives later interviewed Flesch at the police department. He told police that he had been with Marqueius and the relatives in the living room of the residence, and he found a black .380 handgun lying on a couch, according to the affidavit.

Flesch said he picked up the gun, removed its magazine and began to play with it, when it accidentally discharged and shot Marqueius. Flesch fled the scene because he was scared, he told police, according to the affidavit.

In the statement posted Tuesday, Getz did not directly mention Marqueius or the shooting, but said it was “time for our community to step up.”

“As the Chief of Police, I speak for my officers when I say we are tired of dealing with the senseless gun violence and the loss that comes with it,” said Getz, who did not respond to phone messages seeking further comment Tuesday afternoon. “I am not calling out any individual, but am challenging each and every one of you moving forward to do your part in stopping these senseless tragedies.”

In a statement, Decatur Public Schools spokeswoman Maria Robertson said the district had made resources available to those affected by the shooting.

"The Decatur Public School community is deeply saddened and extends heartfelt sympathies to the family and friends impacted by yesterday’s incident," she said. "We recognize there are many members of our DPS family who are grieving this sudden loss and the school district’s team of social workers and counselors have been available to students, their families and staff members for those needing support."

Robertson said the district could not release any information about Marqueius because of confidentiality laws.

As reports of the incident reverberated through Decatur communities since the night of the incident, calls were growing on social media for something to be done to prevent violence.

"It's something that may not have an impact right now, but it may have an impact 10, 15 years down the line," Walker said. "These kids need more outlets."

Alida Graham, board president of the Old King's Orchard Community Center, said no plans were in place yet for a community event related to the tragedy, but that calls for community action were swirling.

"I do sense that there's a growing frustration, especially when a young child, a 12-year-old loses his life," Graham said. "That sometimes can be a tipping point. I hope it is."

As of Tuesday, Graham said the OKO Center was looking at holding a forum on finding solutions to violence in the community at their next planned meeting in December.

This is Decatur's third homicide this month. Tobby J. Buhs, 22, of Decatur died after being stabbed in a parking lot at North Woodford Street and East Mound Road on Nov. 4. Marcqui Apholon, 25, was shot to death Nov. 8 in the 2100 block of East Whitmer Street.

Jaylyn Cook and Tony Reid of the Herald & Review contributed to this story.

Charges dismissed against Decatur man accused of robbing bar patrons, but might be refiled

Police: Arrest made after 12-year-old boy shot to death in Decatur on Monday evening

DECATUR — A 20-year-old man was arrested Monday evening in the shooting death of a 12-year-old boy near downtown Decatur, police said.

DECATUR — A Decatur man who police said fed a woman cocaine and used her as a sex slave for profit has been sentenced to 18 months in prison.

DECATUR — Police are investigating an armed robbery at a business near the 1500 block of East Eldorado Street, Sgt. Erik Ethell confirmed Mond…

SPRINGFIELD — A federal judge has ordered state corrections officers to undergo training on transgender issues, stemming from a lawsuit filed …

Lighting a candle and seeking peace in the streets of Decatur

DECATUR — A Decatur woman and her son escaped injury Wednesday evening when their home was struck by a bullet.

DECATUR — Avante M. Flesch pleaded not guilty Wednesday to the involuntary manslaughter of a 12-year-old Decatur boy who was killed, prosecuto…

DECATUR — A 22-year-old woman has been arrested in the New Year's Day stabbing death of a 38-year-old man in Decatur, police said in a news release.

DECATUR — Community leaders, shocked and saddened by a shooting death and critical wounding in a Decatur restaurant, said the city must take a…

DECATUR — A 12-year-old from Decatur is part of a project by student journalists who sought to memorialize the 1,200 children killed by gun vi…

DECATUR — Avante M. Flesch will be sentenced Aug. 14 and faces up to 10 years in prison after pleading guilty to accidentally shooting to deat…