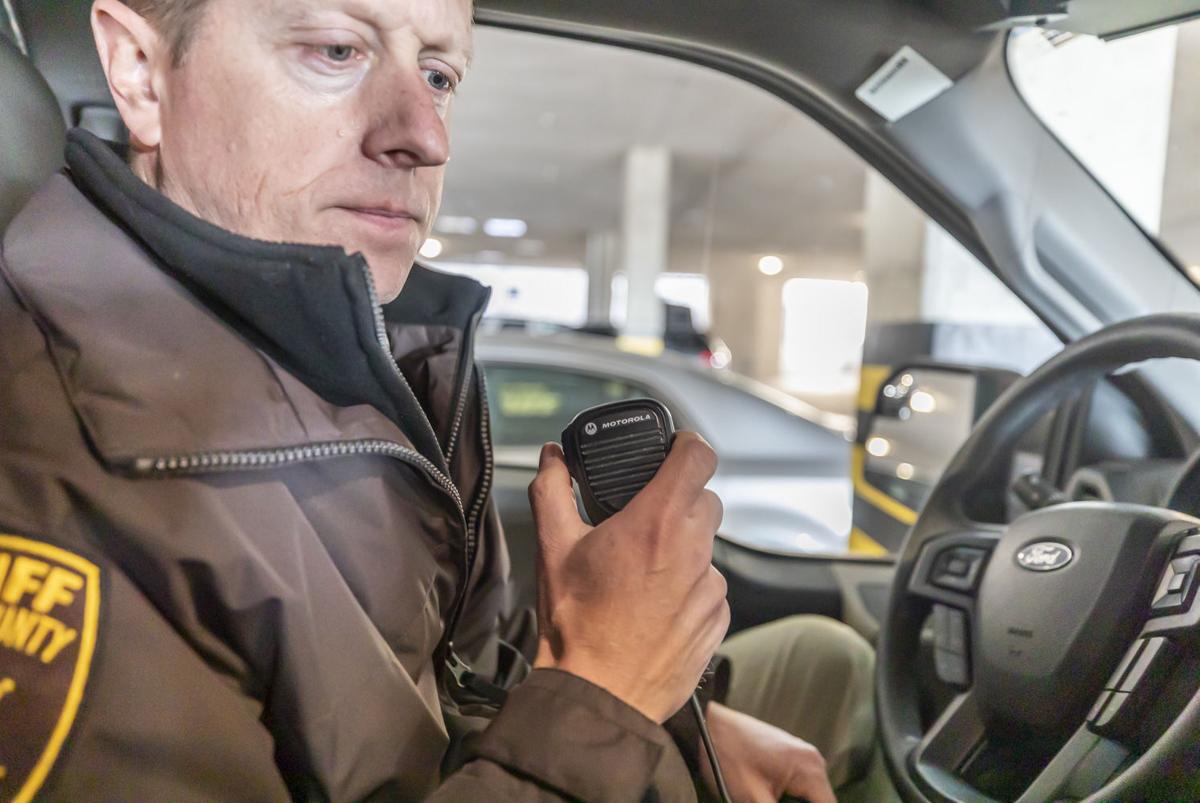 Sgt. Jason Brown uses a radio in a Macon County Sheriff's Department vehicle. The sheriff's department and Decatur police recently adopted a digital and encrypted radio system that prevents anyone without authorization from listening in on police communication. 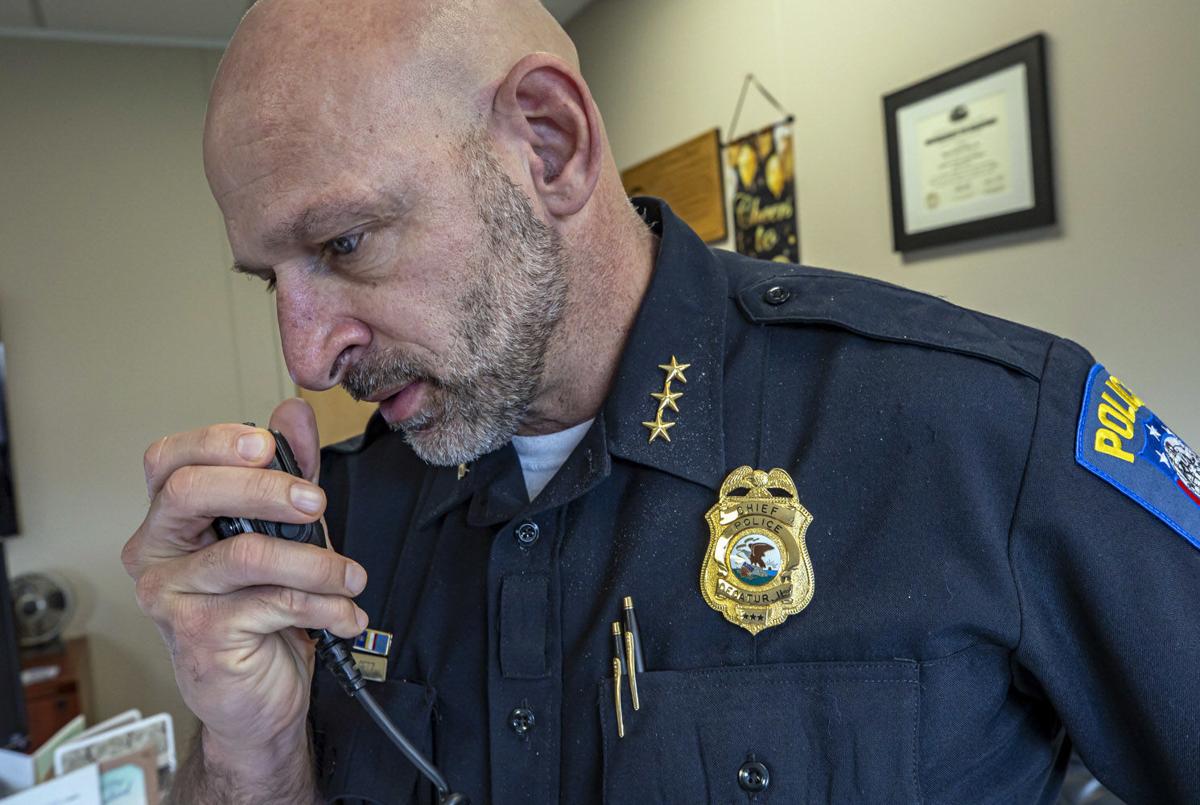 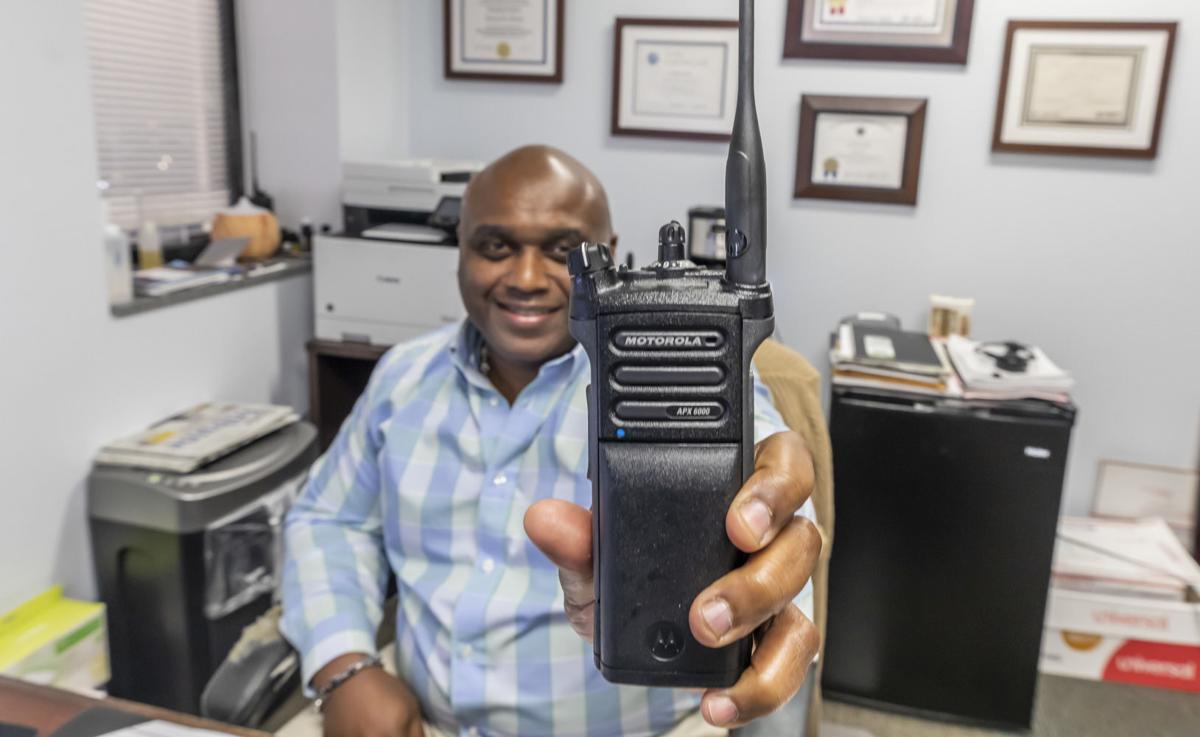 DECATUR — Police trying to deal with civil unrest last summer fired up their radios to call for help and instead were blasted with hip-hop group N.W.A.’s 1988 song “(Expletive) tha Police,” effectively drowning out their communications.

That was in the Windy City, when hackers managed to penetrate the air waves reserved for Chicago police communications. Not all the incoming messages were hostile — the Chicago Sun-Times reported some air wave trespassers cried out “Blue lives matter most” — but it was all frustrating and potentially dangerous for officers on the front lines of maintaining law and order.

And it got noticed. Decatur Police Chief Jim Getz said such incidents helped prompt him to pull the plug on regular police radio and opt for a digital and encrypted radio system that can't be heard or hacked by the public. It fired up several months ago, with the Macon County Sheriff’s Office following suit at the same time, and all those scanners and scanner apps citizens purchased to listen in on what the police were up to can now only eavesdrop on an earful of static.

But is encrypting police radio talk the right thing to do? No one will argue that Joe Citizen has a right to butt in on police radio traffic, but does he have a right to passively listen to what those sworn to protect and serve are doing to meet those goals?

The Reporters Committee for Freedom of the Press, an advocacy group for First Amendment issues, said encryption is a trend showing up across the country. Police departments from Baltimore to Denver have gone the encryption route, citing officer safety concerns. Many departments offer exceptions for news media who get a “decryption license” and buy a listen-only radio so they can stay ahead of the news. But radios can be expensive and, in Denver, for example, such a license costs $4,000 and is subject to expensive and extensive insurance requirements, according to The Reporters Committee.

Getz said he is having the City of Decatur legal department draw up an agreement that news organizations can sign to get listen-only access to the new encrypted system. One sticking point there might be is who qualifies as a bona fide member of the media, at least based on research done by the Reporters Committee. https://www.rcfp.org/tech-press-freedom-oct-4-2020/

Deputy Decatur City Manager Jon Kindseth said the city will not charge for such media listen-only licenses, and the only upfront expense he sees is the cost of obtaining the listen-only radios.

Media can still listen in

Both Kindseth and Getz said the city has no issue with legitimate news organizations listening to what the police are doing.

“I think some in the media believed we were trying to withhold or hide things from them, but I have no problem with the media knowing where we are at so they can do their job,” Getz added.

But he restated his concerns about officer safety, especially in the wake of incidents elsewhere where he said police officers have been attacked. And there have been tense moments in Decatur where officers trying to make an arrest suddenly found themselves surrounded by a hostile crowd. Getz said such crowds can swell in size quickly when fed with information learned from police radio calls and then disseminated in the tap of a thumb via social media.

There are privacy concerns, too. The modern means for rapid transmission of intercepted information poses both investigative and privacy issues when police are broadcasting personal details over the air, according to the chief.

“We give out the addresses of victims, the addresses of witnesses, dates of birth and other information like that,” said Getz. “We have to be concerned for the privacy and safety of citizens as well.”

But others, observing the trend toward encryption from outside law enforcement, don’t see what has changed so dramatically to justify shielding everyday police communications.

Lambert believes encrypted radio is a sign of the police circling the wagons in a world they feel is increasingly hostile to them. “It’s part of a long chain of where police feel like everybody is out to get them,” he added. “They’re kind of closing ranks, and they want to make sure they don’t have anything out there that can look bad or sound bad.”

Lambert said closing off radio communication to regular citizens who like to listen is also depriving them of knowledge and understanding of their local community and what’s happening in it.

Getz, on the other hand, did point out that requests through the Freedom of Information Act can obtain everything from police radio traffic to body camera footage, so lots of information on law enforcement activities is still available, just not necessarily at the time it's happening.

Lambert said that’s fair enough, but navigating the FOIA system for non-journalists is not always easy. “And you are making people take extra steps,” he added. “If you are just a regular Joe Citizen, a lot of times you don't know how to go about FOIA and, if you don’t know, it's easy for something to be hidden.”

The professor isn’t sure that some kind of licensing system to give bona fide journalists encrypted radio access is all that healthy, either. He said making members of the media buy special equipment or obtain licenses invites them to step over a line of independence from law enforcement. “The police are co-opting the media into their own circle,” said Lambert. “It’s not the media’s job to be co-opted with the police or embedded, or (their) friend.”

Not all seek encryption

But not all law enforcement is ready to embrace all encryption all the time. The Illinois State Police still use open radio channels for “normal field operations,” according to an emailed statement from Beth Hundsdorfer, chief public information officer for the troopers.

“Encrypted channels are reserved for certain high-risk operations where officer safety is impacted, as well as circumstances where reciprocal agreements with law enforcement partners require encryption to achieve interoperability,” she added.

Macon County Sheriff Tony Brown, however, is happy to have gone the encrypted route and shares Getz’s concerns about officer safety and privacy issues. He said his deputies have to operate in a world where miscommunication and rumors spread over social media like digital brush fires, as we saw after a hot 2020 summer of protests and street riots.

He said cutting down on the sparks that can cause big conflagrations, like overheard or misheard radio traffic, keeps his officers, and his community, safer.

“If we show up on scene and all of a sudden you have a lot of people in the neighborhood on that scene as well, a lot of time a lot of things can kind of get lost in translation,” he said. “You can end up with officers feeling threatened — and/or the public — and now you have a situation that can get out of control. And after what we’ve seen happen nationally, the last thing we want to have is that situation happening here.”

One public figure with a rather unique perspective on all this is Decatur Mayor Julie Moore Wolfe, a former TV journalist and nightly news anchor well-schooled in the relationship between the press and law enforcement. She also knows how important monitoring police radio traffic is in the media’s constant quest to know, and know now.

“When this happened (Decatur police switching to encrypted radios), I got a call from a media outlet immediately,” said Moore Wolfe. “TV was saying, ‘What’s happened here? You know how we work.’”

Moore Wolfe said she is happy that police radio monitoring access will be granted to accredited media. But she said she also understands the dangers of what can happen if eavesdropped police communications traffic is fed into a world of Facebook and Twitter and becomes fuel for twisted narratives and wild rumors.

“Newspapers, television and radio stations are not going to do something that gets them into trouble, is irresponsible or gets them sued,” she said. “And while journalists have a code of ethics, the world of social media has altered everything. You know, I can think of a time when a doctor died and the coroner and police were at her home and it was all over social media before her family had been notified.”

Moore Wolfe said freedom of speech is crucial, but with freedom comes responsibility, and the dangers of information snatched off the airwaves that can put the police or citizens in danger, or fuel a riot, has to be taken into consideration, and mitigated.

Do you think the public should have unhindered access to monitor police transmissions. Join the conversation at herald-review.com/letters.

Police said the man who ran from them also left behind a live .380 bullet on the floor of the car he was riding in.

Describing a recent spike in Decatur gun violence and murder as “unacceptable,” the city’s police chief told council members what he intends to do about it while also safeguarding the lives and civil rights of those who find themselves confronted by police.

Widespread body camera use is set to bring police work in Decatur into a much sharper focus.

Back the Blue, a rally held at Mound Road and U.S. 51 on Saturday, was a Facebook event that asked those attending to bring signs in support of law enforcement and wear red, white and especially blue.

Police are asking for public help identifying two suspects believed to be tied in a recent neighborhood shootings.

Residents wait for word to return home after Chemtool fire

Residents wait for word to return home after Chemtool fire

Sgt. Jason Brown uses a radio in a Macon County Sheriff's Department vehicle. The sheriff's department and Decatur police recently adopted a digital and encrypted radio system that prevents anyone without authorization from listening in on police communication. 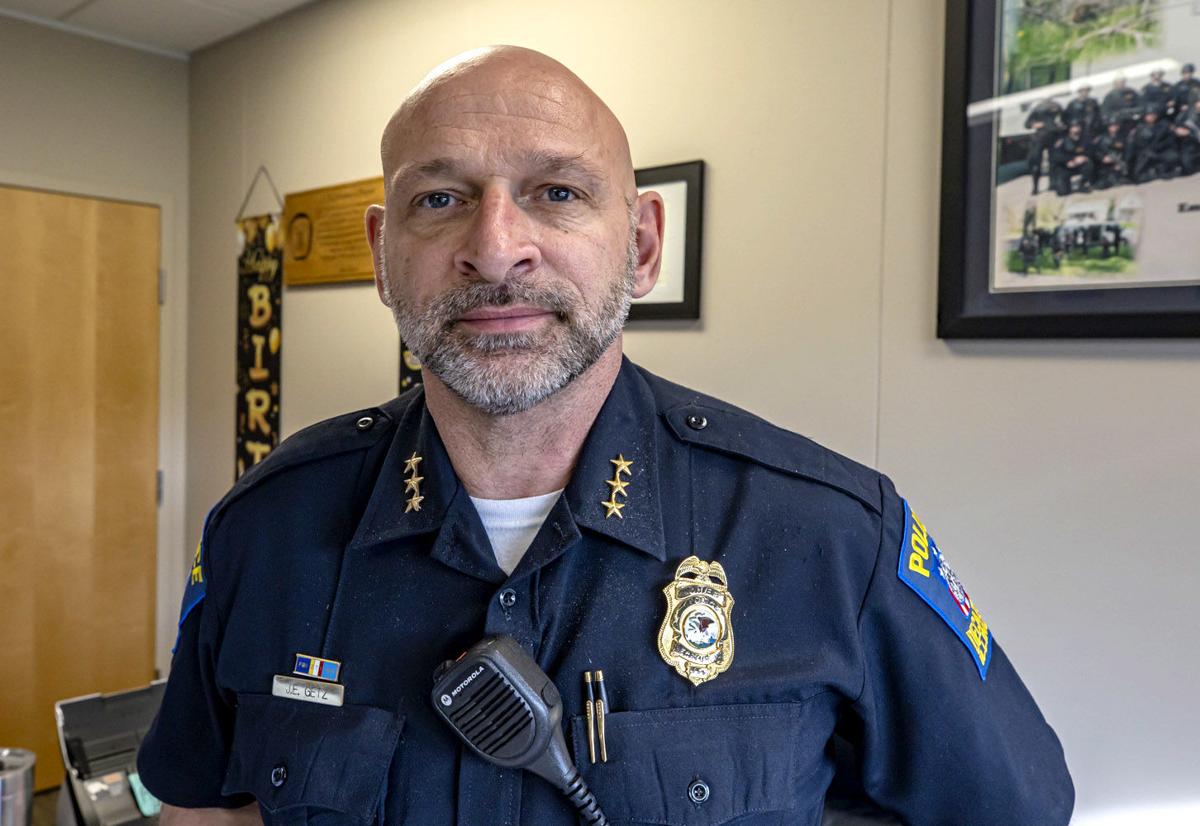 In addition to the officer safety aspect of limiting access to police radio transmissions, Decatur Police Chief Jim Getz said privacy issues regarding victims and suspects also are part of the equation. 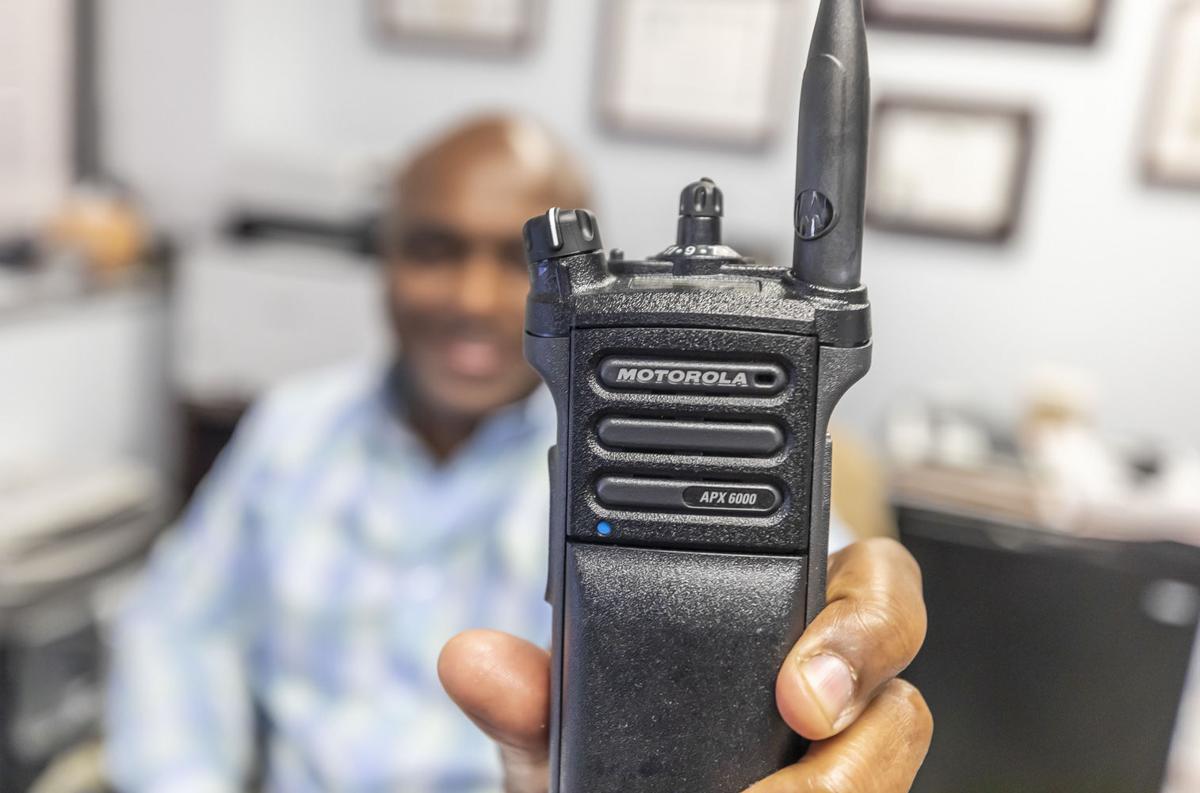 Macon County Sheriff Tony Brown shows a hand-held radio carried by members of his department. Brown cites officer safety as the primary reason for the switch to encrypted radio transmissions. 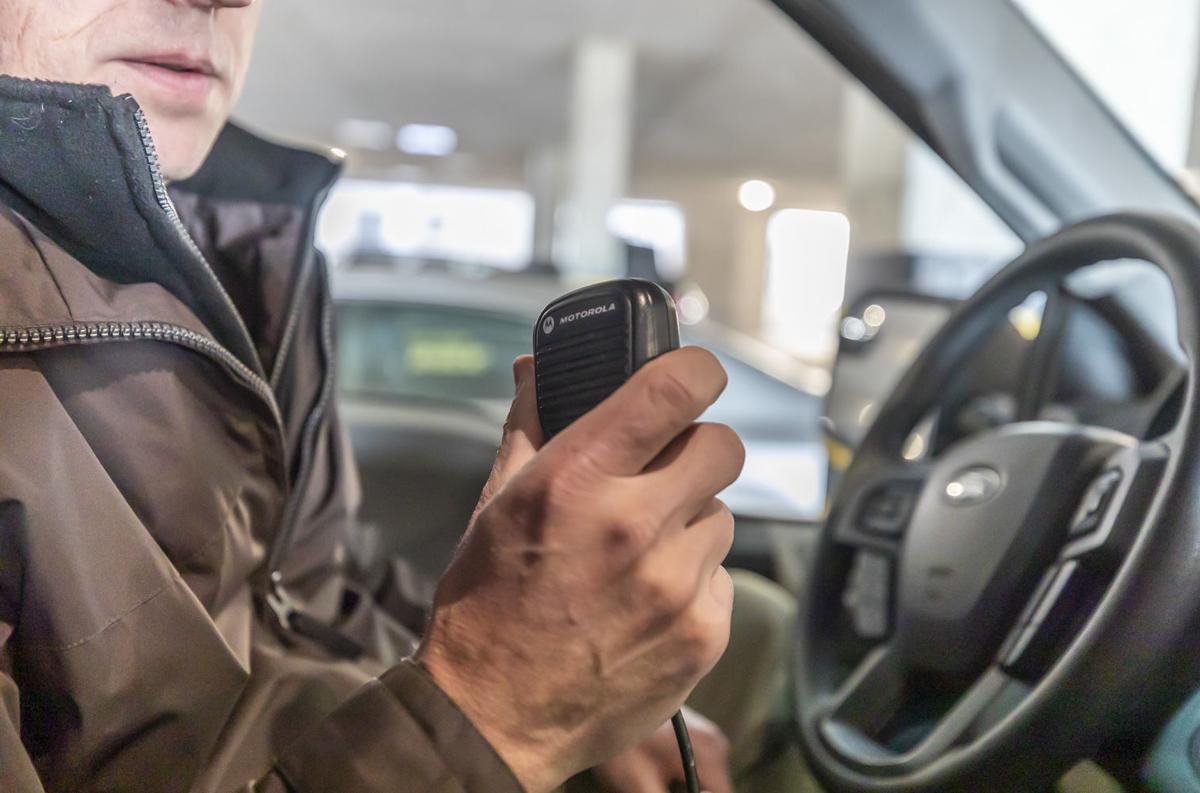