CLINTON — The wind energy company constructing DeWitt County’s first wind farm is suing the county and its zoning administrator over accusations of "withholding” of building permits.

Alta Farms said in court documents that DeWitt County has “no legal or factual basis … to refuse to issue the building permits for these wind turbines.”

A defendants’ answer filed Tuesday by Northbrook defense lawyer Lance Neylan admitted the county has not yet issued additional permits, but denied wrongdoing. The lawsuit was filed nearly three weeks after the DeWitt County Board voted to suspend issuance of building permits for the wind farm. 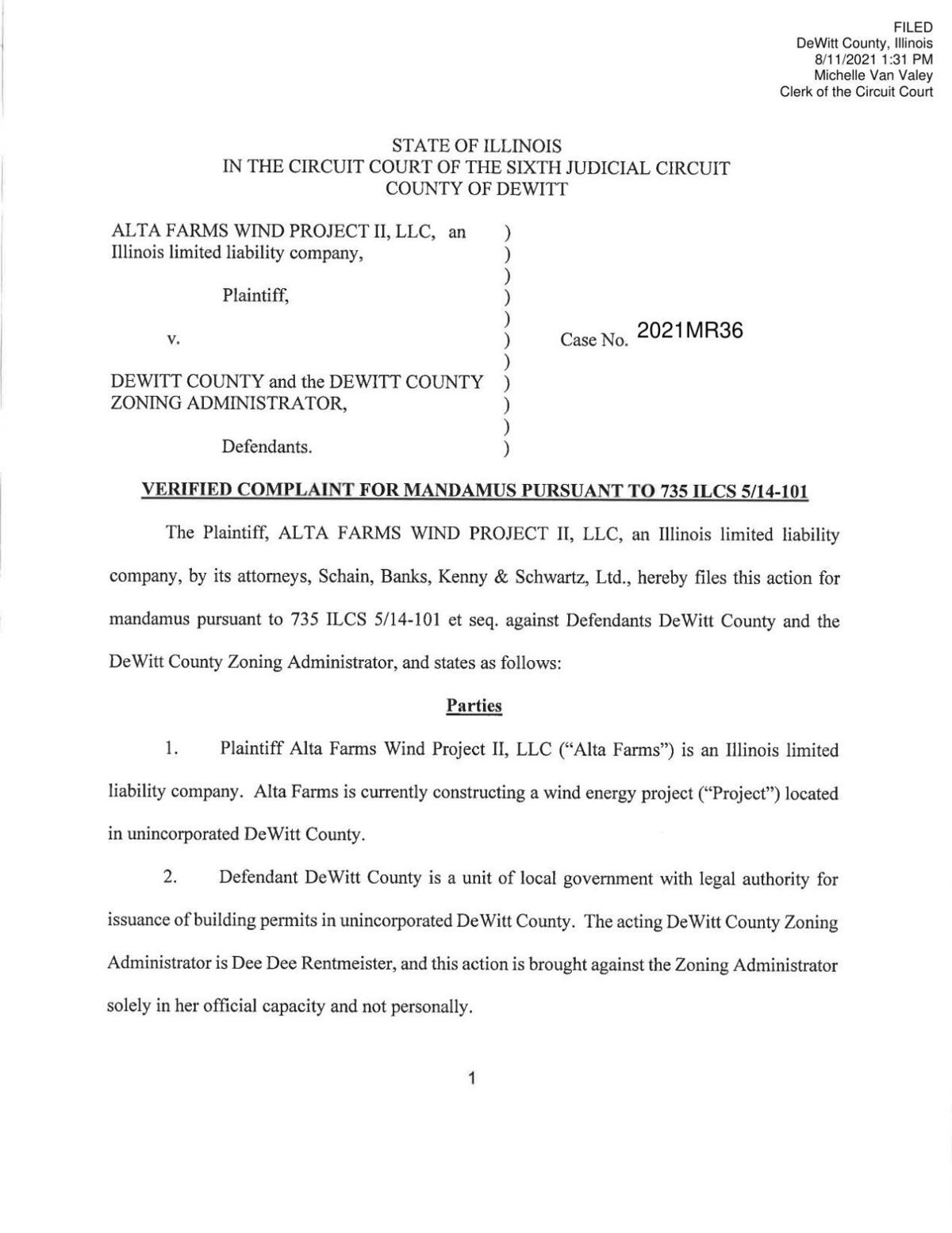 The DeWitt County Board approved the 200-megawatt wind farm project July 14, 2020 on a 6-5 vote in front of about 250 people, including many who opposed the project. The plan called for constructing 66 turbines in three northwestern townships near Waynesville and Wapella.

Alta Farms applied for building permits for 57 turbines Nov. 5, of which 30 permits were issued.

The lawsuit requests 15 additional permits to be issued.

The DeWitt County Board narrowly voted July 22 to suspend issuance of building permits until Alta Farms’ parent company Enel Green Power shows the board its permission from power companies to automatically slow or stop the turbines during severe weather.

Curtailing the turbines could reduce interference with Doppler radar during thunderstorms and tornadoes.

Alta Farms said in the lawsuit that it will continue to “suffer each day until such permits are issued” and the “refusal to issue” permits has caused substantial damages resulting from construction delays.

The defendants denied that it has caused suffering, damages and delays, and also denied that Alta Farms “has a clear right to the issuance” of the permits, according to their written response to the lawsuit.

Alta Farms’ filing this month comes as the project has already looped through legal battles.

About five months ago, two lawsuits against Enel Green Power North America were dismissed by a DeWitt County judge. 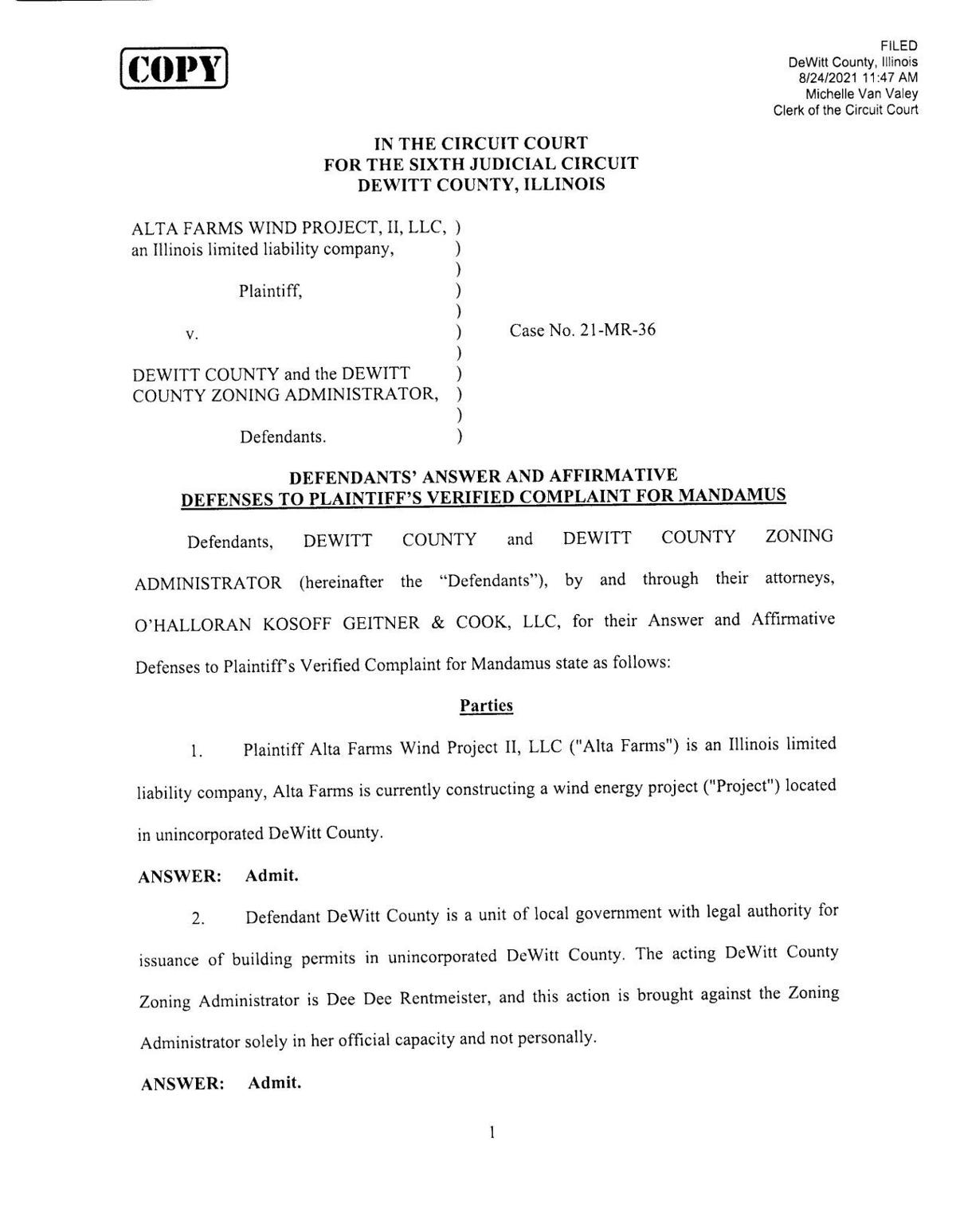 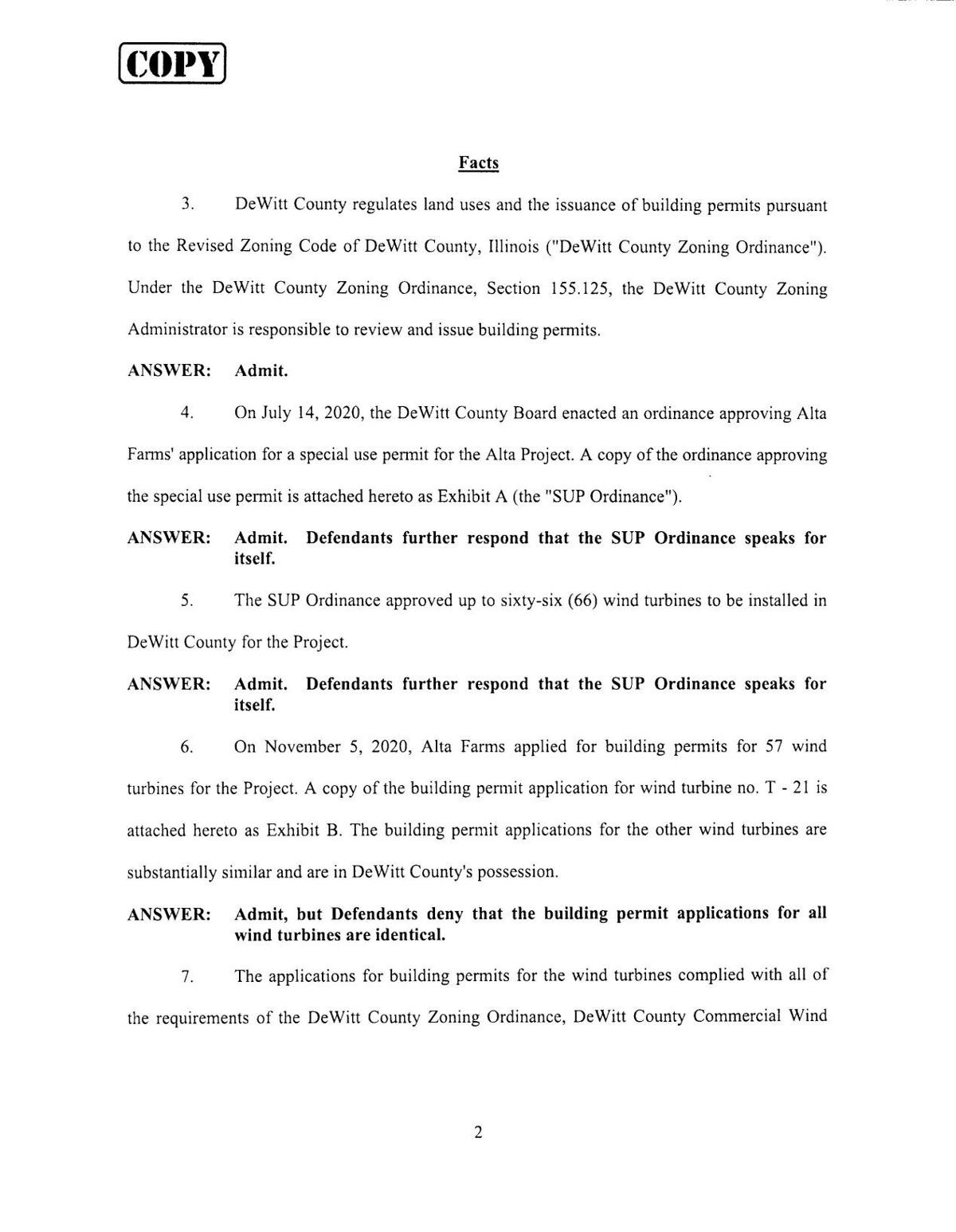 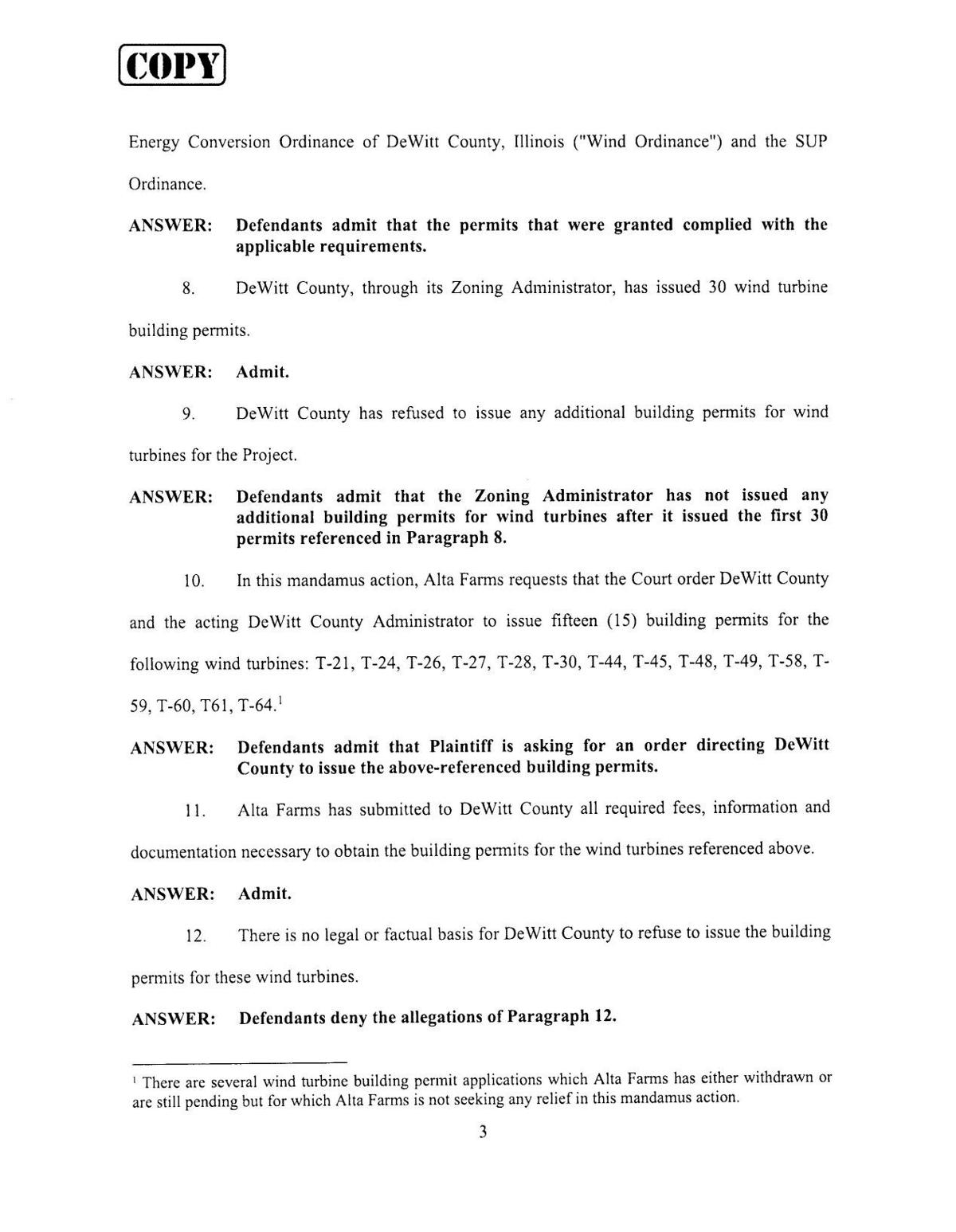 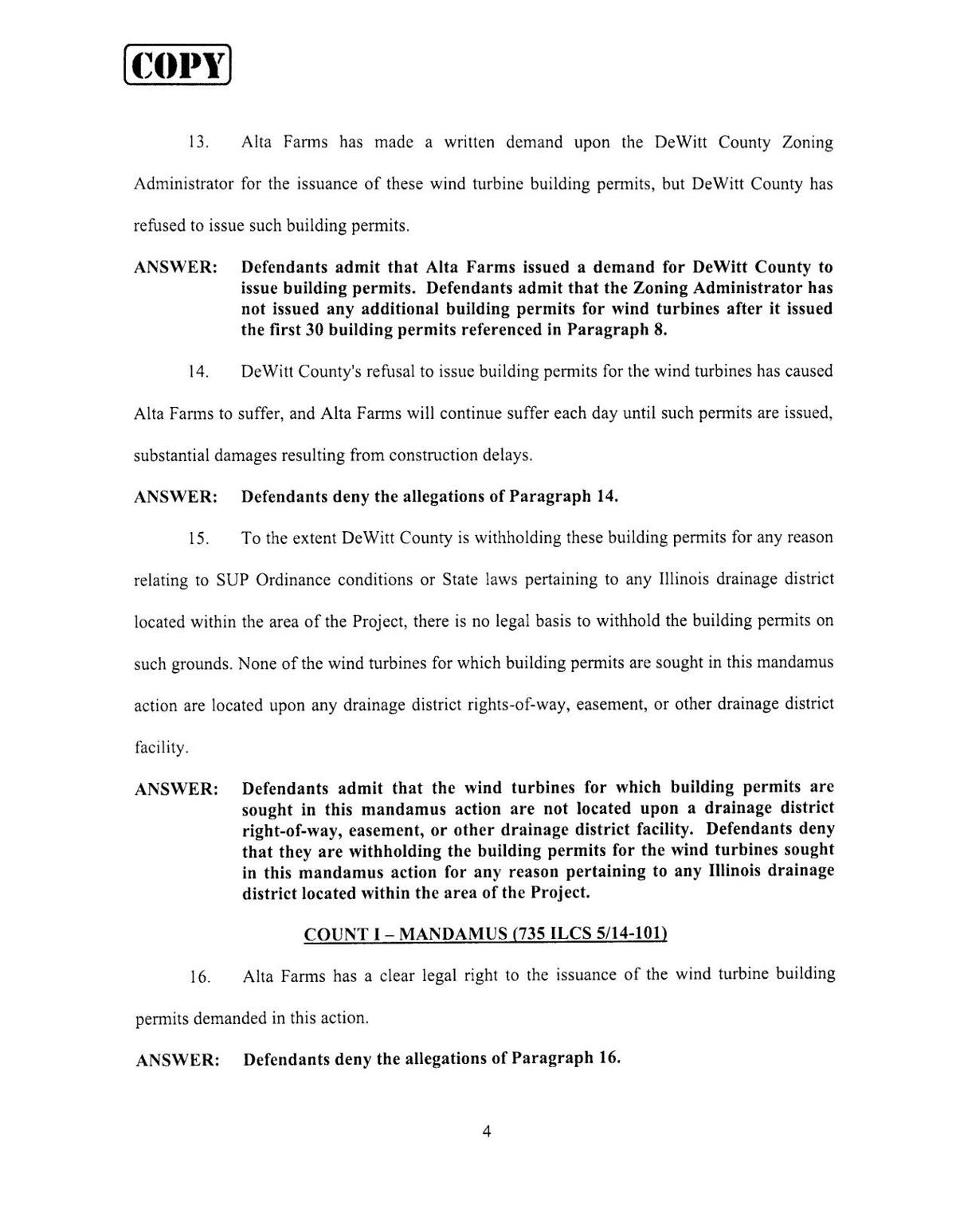 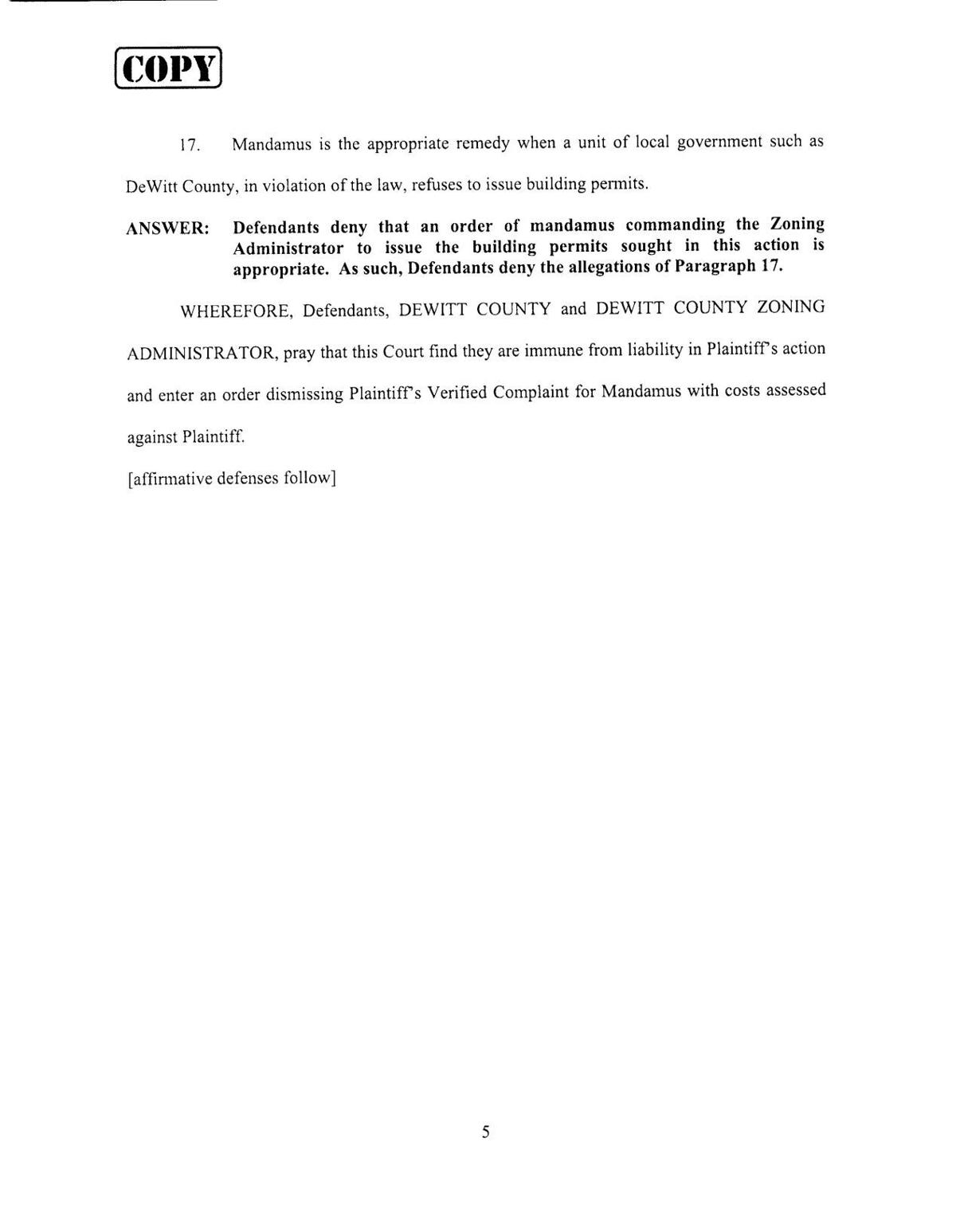 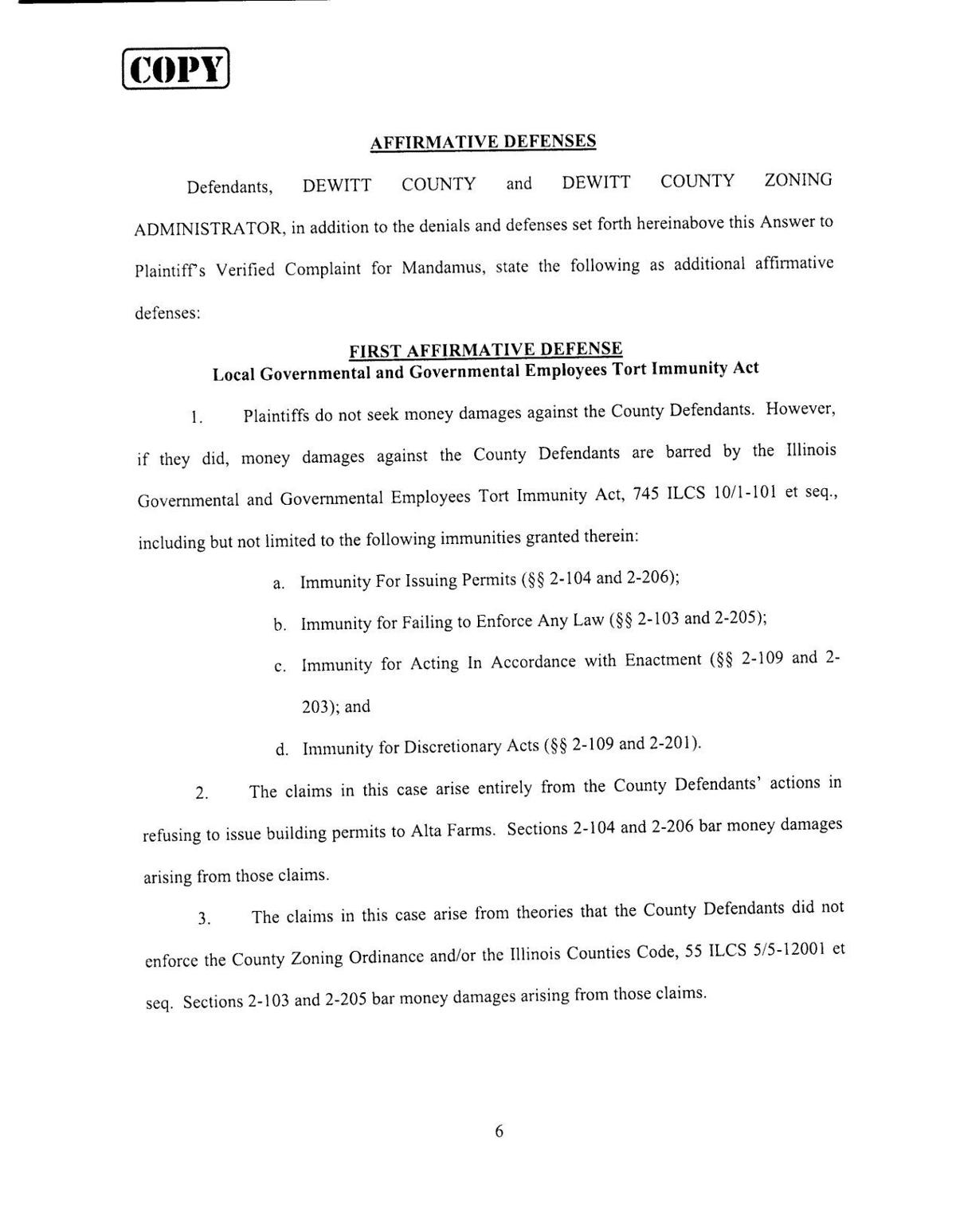 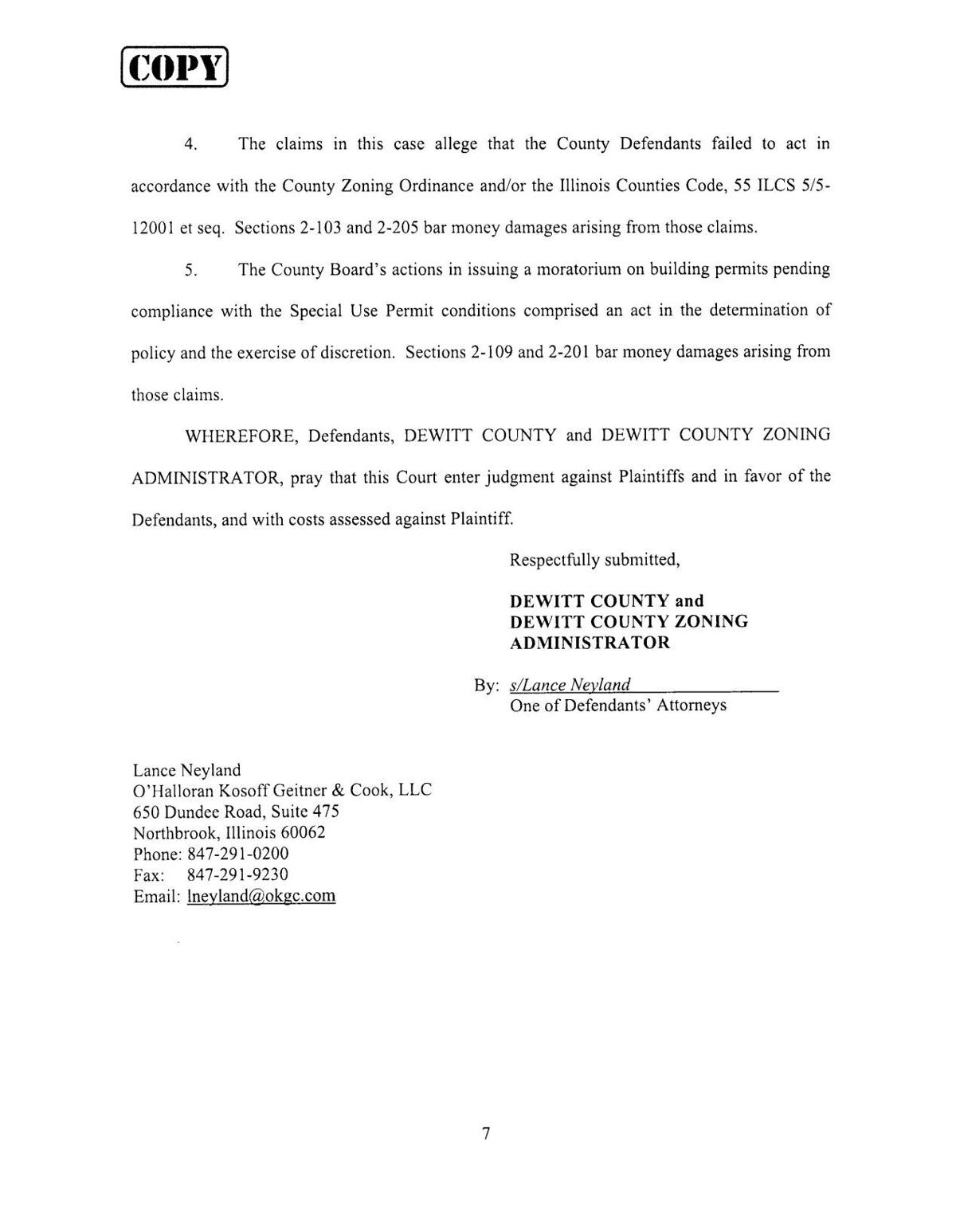 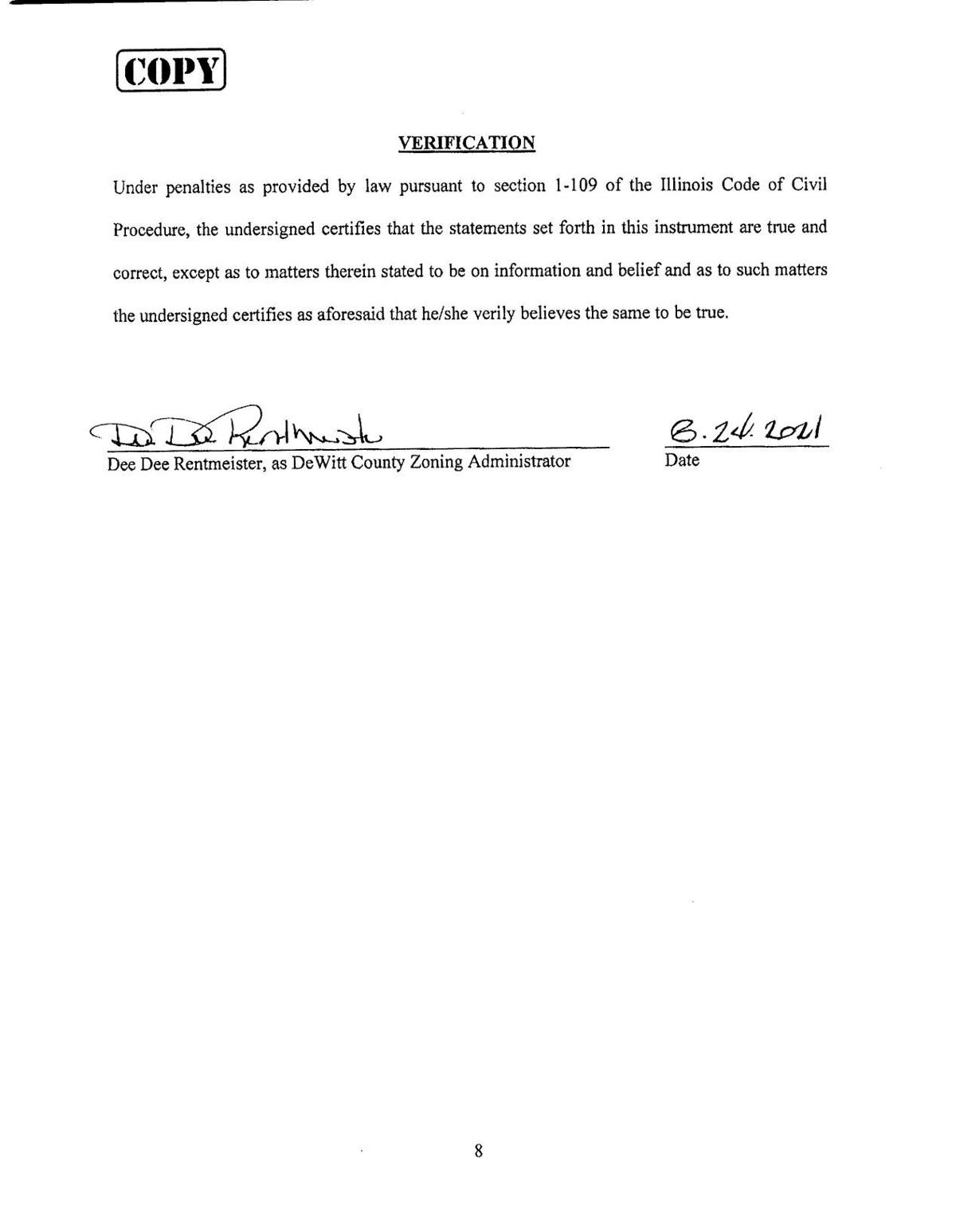 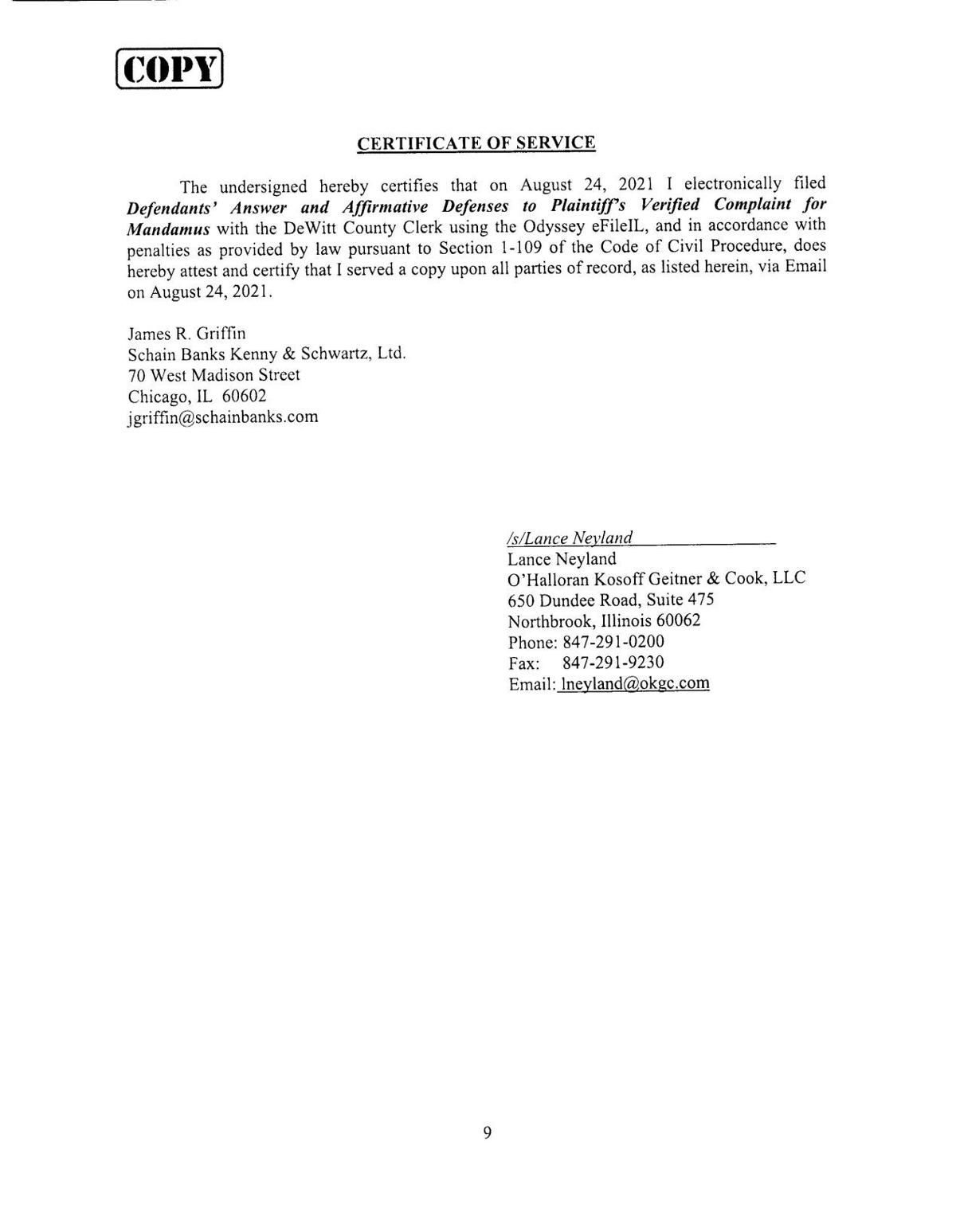 Take a look at this year's special Farm Focus section, which showcases Central Illinois agricultural producers. Have a story idea for our next edition? Email scott.perry@lee.net.

Watch now: Pennycress evolution could be game-changer for agriculture, climate

A weed that Central Illinoisans see along roadways, at the edges of fields or at construction sites has been domesticated in Central Illinois into a crop that researchers say has the potential to help combat climate change and provide additional income to farmers.

Sales from dispensaries across the state totaled nearly $128 million last month, a 10 percent jump from a record-setting $116.4 million in May.

The face of FFA continues to change with the times

“It’s very different than it was 30 years ago, whereas every kid was from a farming background or grew up on a farm,” said Jaton Shaffer. “It’s definitely transitioned from that.”

Richland Community College's agriculture and horticulture programs have grown and expanded in the last few years and offer transfer to a four-year university.

Ahead of his first Farm Progress Show, Costello sat down with Lee Enterprises for an interview about Illinois agriculture and its place in the world.

Other felony charges also dismissed, but could be refiled.

The inspector general’s office found that Buffett was granted a certification despite not meeting the state-mandated qualifications.