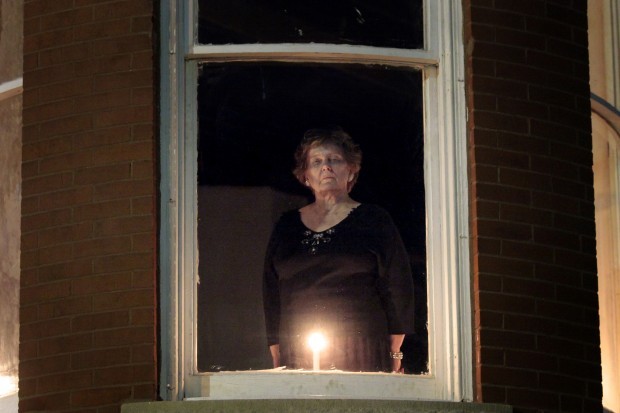 Herald & Review/Stephen Haas Lynn Potter, a volunteer with the Historic Properties Foundation, poses for a photo through the parlor window at the historic Culver House in Decatur. Potter will tell the story of Florence Culver to visitors this weekend during tours at the house. 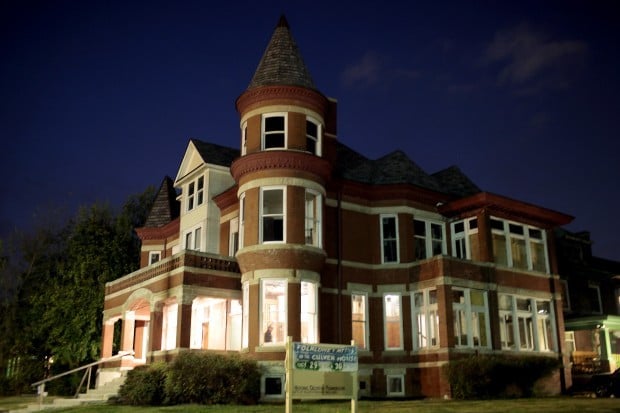 Herald & Review/Stephen Haas A view of the exterior of the historic Culver House in Decatur. 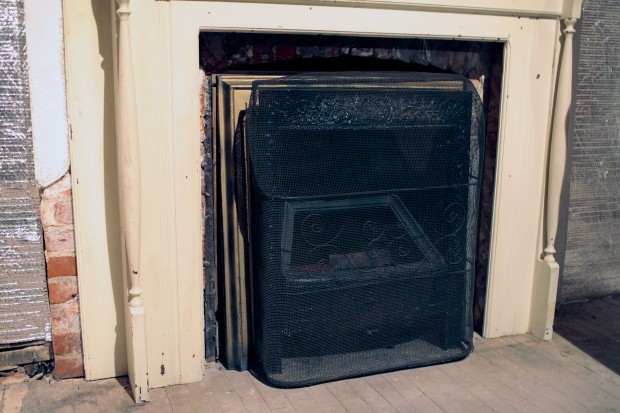 Herald & Review/Stephen Haas The fireplace in the dining room at the historic Culver House has been opened up.
{{featured_button_text}}
By TONY REID - H&R Staff Writer

DECATUR - There's a new address for terror in Decatur this Halloween: The Culver House.

Except that this massive red brick mansion at 412 W. Prairie Ave. isn't really a new location to go for a good fright out. It's more a case of a nightmare revisited as the twin-turreted home, which looms like a set in search of a horror movie, has seen more than its fair share of scary stuff in a history stretching back 129 years.

Brave visitors can find out all about if they take the "Folklore and Myths of the Culver House" tours on Friday evening and Saturday afternoon. The tours are being organized by the Historic Properties Preservation Foundation, the group of courageous volunteers who are painstakingly restoring the once empty and condemned mansion.

Among the spooky delights awaiting visitors will be enthusiastic Culver House supporter Lynn Potter dressed as the spirit of Florence Culver, the terrified wife of homeowner John Culver. Potter will tell how the lady of the house was once scared out of her wits by some sort of apparition that flew at her out of the dining room fireplace. Culver had the fireplace covered up and now the restorers have got it uncovered again, a waiting portal to the spirit world.

"They say this house is so haunted because of the land here," said Potter, who believes the place was doomed from the get-go. "The builders had found lots of bones and skulls when they were digging the basement because this land was an Indian burial ground."

And it turns out the Culvers only bought the house later from the original family who had it built and then promptly fled in terror, refusing to ever go back.

The Culver family had stuck it out until John Culver's death in 1943 and the house was later converted into apartments, so beginning the acquisition of some dark new chapters in its history. Halloween visitors will hear harrowing details of the two well-documented suicides, at least one murder and a major fire as tenants translated their sad and unhappy lives into tragedy.

Then terror tourists can take a break for some nice seasonal refreshments like apple cider and munchies that include banana-nut bread and Halloween-themed cookies. Their guides will take time to explain some of the Queen Anne-style home's intriguing architectural features and update their goose-pimpled guests on the remarkable progress of the restoration project.

In many ways, the real horror story of the Culver House is how close it came to being exterminated by the wrecking ball in 1999 after being left empty for years to rot and molder away. Now the exterior is all fixed up and looking good and work is beginning on the resurrection of the interior back to a semblance of its Victorian glory.

"We want people to have a chance to see inside, to see what we've done and what we're doing," said volunteer Claudia Williams. "You know, we've had several people say they've walked by this place and seen ghosts through the window; now they can inside for themselves."

The "Folklore and Myths of the Culver House" tours will be held from 6 p.m. to 8 p.m. Friday, Oct. 29, and from 2 p.m. to 4 p.m. Saturday. Oct. 30. Admission is a $10 donation which the Historic Properties Preservation Foundation will use to pay for the printing of an old book it has updated called "Places and People of Old Decatur." Sales of the book will benefit the continuing restoration of Culver House.

"These types of rumors are dangerous and can shatter lives and reputations, and potentially jeopardize the investigation," Deputy Chief Shane Brandel said.

Police who responded to the 400 block of East William Street on Sunday night said they were dealing with a man who had threatened to harm himself.

A Decatur mother used pepper spray to repel her adult son after he kicked the front door off its hinges and tried to invade her home, police say.

Police are investigating after a vehicle's windshield was smashed by an object hurled from the top of the overpass in the 2600 block of North Oakland Avenue.

A check of the Macon County Jail Sunday said the man remained in custody in lieu of bail set at $20,000, meaning he must post $2,000 to bond out.

A Decatur police spokesman said the incident was unrelated to an earlier shooting in which a 17-year-old was wounded.

Teacher and staff shortages are still an issue for Illinois schools, with more than 4,000 openings statewide.

Herald & Review/Stephen Haas Lynn Potter, a volunteer with the Historic Properties Foundation, poses for a photo through the parlor window at the historic Culver House in Decatur. Potter will tell the story of Florence Culver to visitors this weekend during tours at the house.

Herald & Review/Stephen Haas A view of the exterior of the historic Culver House in Decatur.

Herald & Review/Stephen Haas The fireplace in the dining room at the historic Culver House has been opened up.
© Copyright 2021 Herald & Review, 601 East William Street Decatur,IL | Terms of Use | Privacy Policy | Do Not Sell My Info
Powered by BLOX Content Management System from TownNews.com.
You don't have any notifications.