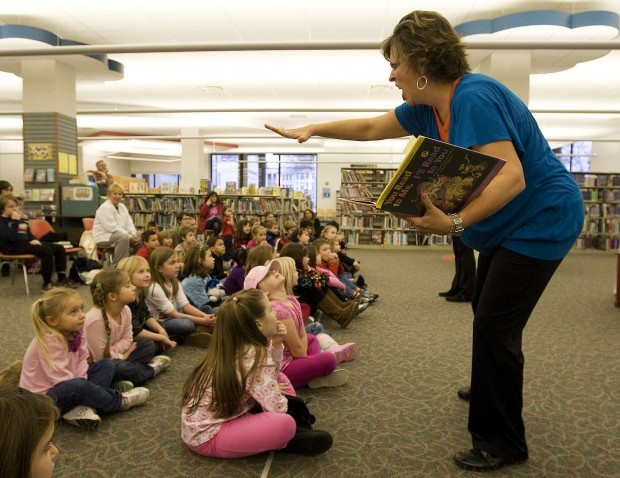 Susan Bishop performs a scary character during the READiculous presentation in which Bishop and fellow librarian Alissa Henkel acted out characters from childrens books at the Decatur Public Library on Friday afternoon. The duo hope to bring their show to all of the local elementary schools to encourage children to read. 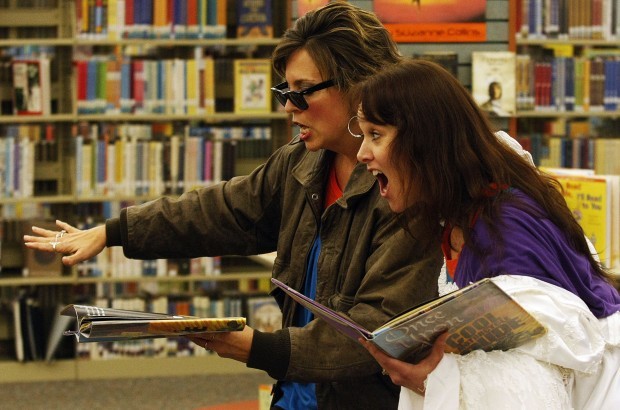 Susan Bishop, left, and Alissa Henkel act out a book about two opposite characters during the show.

DECATUR - The thing about performing for children is, you never quite know what they'll do.

Alissa Henkel and Susan Bishop found that out on Friday when they put on their READiculous show for kids at the Decatur Public Library, where they read aloud and act out a series of children's books.

Henkel was a little girl who'd lost her bear and couldn't find it anywhere. Her mother, father and sister were all too busy to help her look and besides, she was always losing things. She had to find it herself.

Except she didn't, because 5-year-old Graham Fay, visiting grandma Paulette Fay for Christmas from Michigan, called out several times, "I see your bear!" and finally got up and went to show her where it was.

"We practice in the back room," Henkel said after the show. "We don't know how the kids are going to react, so it was a surprise."

The two women both enjoy acting and have a flair for it, but with part-time jobs as children's librarians, and families of their own, they don't have time to get involved with typical community theater activities. They cooked up the idea of a readers theater that they would perform for area schools, dramatizing children's books.

People often ask for activities to be held during the school break at Christmas, so it was a good fit to put on their show at the library, and a lot of children approached them afterward to ask where they could find the books used in the show.

A favorite series of books for the two women is Piggy and Elephant. Some 16 books are already in print and more keep coming, Henkel said. She wears a pig hat and Bishop the elephant, and they act out the simple stories with a lot of gusto because by now, they know the characters very well.

Another series of books is called "That's Good; That's Bad." In the story performed on Friday, a little boy has several adventures swinging on a vine that turns out to be a snake and accidentally waking up a lion, and each time one of the women said "That's good!" the other would counter with, "No, that's bad." It didn't take long for the kids to pick up on the rhythm and chant the words along with them.

It's fun to do the shows, Henkel said, not only because they never know what might happen, but because it gives both a chance to be kids again themselves.

"Some of the books we thought were bad (choices) were the best ones," she said.

A video making the rounds on Facebook shows a 15-year-old student at MacArthur High School being attacked and beaten by a group of other boys.

The board also named Kent Newton to fill the vacancy left by the resignation of Dave Brandon last month.

A felon was caught leaving a stolen firearm from 2005 on a store’s shelf after witnessing a police K-9  conducting a free air sniff around his vehicle.

The man's Decatur home was also at the center of a bomb scare.

A fisherman at the Clinton Lake Valley Mill Fishing access reported seeing a vehicle on the edge of the lake and then saw a body in the water, authorities said.

Couple have breathtaking close encounter with group of humpback whales

Susan Bishop performs a scary character during the READiculous presentation in which Bishop and fellow librarian Alissa Henkel acted out characters from childrens books at the Decatur Public Library on Friday afternoon. The duo hope to bring their show to all of the local elementary schools to encourage children to read.

Susan Bishop, left, and Alissa Henkel act out a book about two opposite characters during the show.