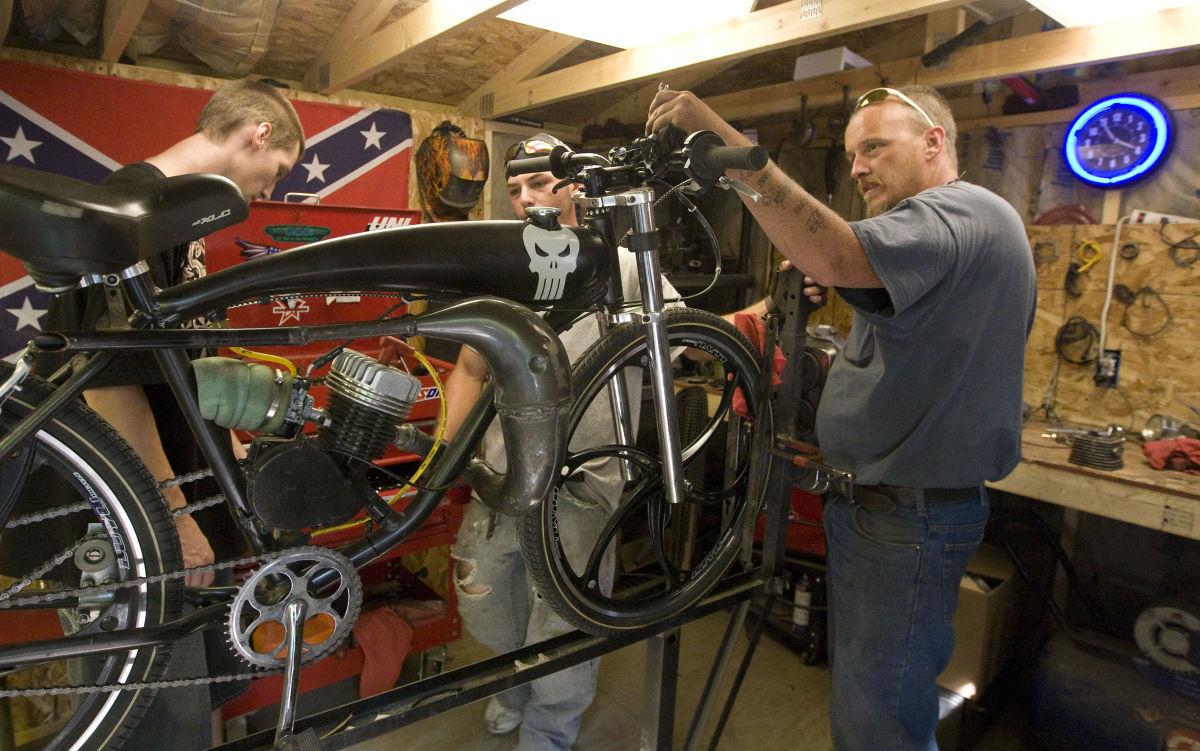 Jim Irvin, right, spends his free time creating motorized bicycles. Some his creations are gaining a reputation for speed on the race tracks. He is assisted in the building process by friends Dillon Astransky, left, and Jeremy Flynn, middle. 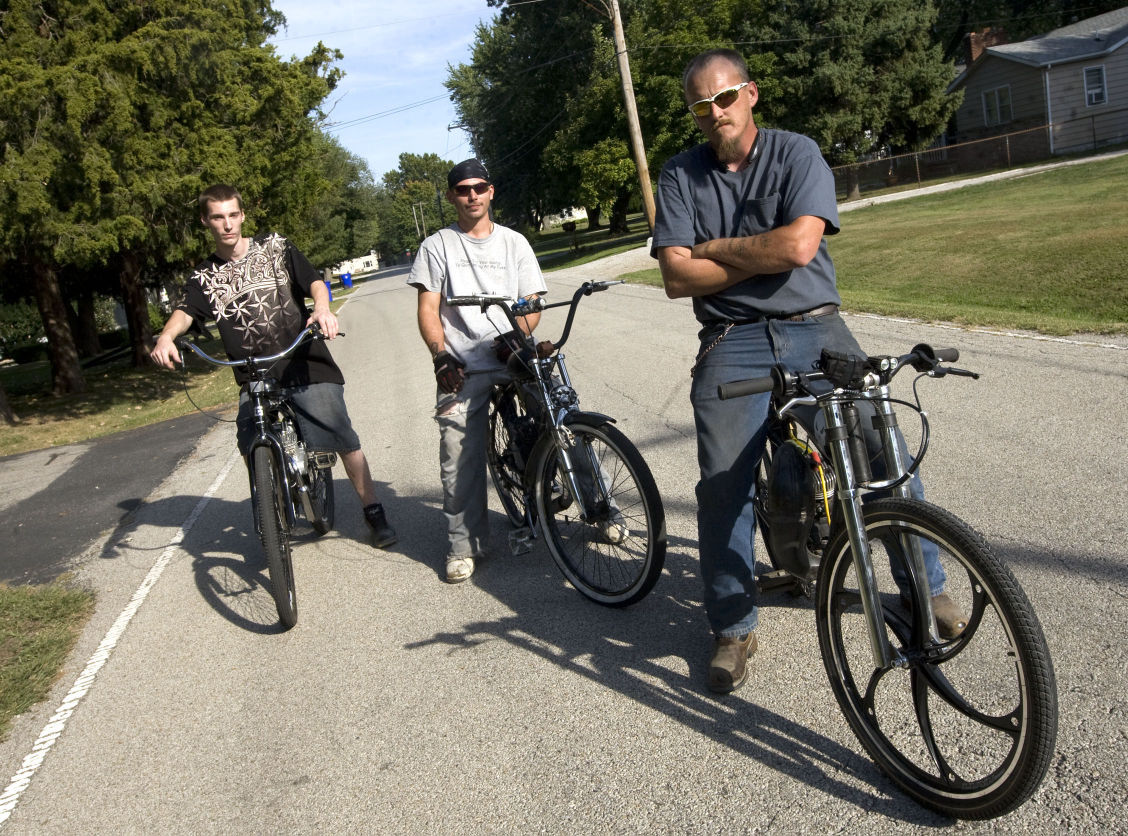 DECATUR – When it comes to ranking bravery, there are the merely courageous and then are those who enjoy accelerating to more than 60 mph on a motorized bicycle.

“Saying it's fun doesn't even begin to describe it,” says Jim Irvin, a Decatur entrepreneur and fast-bike lover who runs a thriving performance business out of his backyard workshop. “It puts a grin on your face.”

If that kind of fearless performance also flips your kickstand, the 36-year-old Irvin is the mechanical guru who can put your pedal to the metal, as it were. He builds motorized bicycles that range from mild, 25 mph everyday transport, to racing models designed for the track. As with everything else mankind has ever managed to strap an engine onto, motorized bikes have developed their own racing hierarchy, and Irvin sits tall in the saddle as one of its high priests.

“This is a first in the industry, a 5cc (cubic centimeter) combusition chamber,” says Irvin, holding up a shiny modified two-stroke engine cylinder head he's reworked with his magic. A cylinder head with a 5cc capacity is a big deal, performancewise, in the world of fast bikes.

You can marry that with an Irwin modified carburation system, an Irvin balanced crankshaft, an Irvin tuned exhaust and on and on for a power plant that will smoke your rivals down at the track.

“I can build 'em from extremely mild to insanely ridiculous modified,” he says of his engines. “I build race engines and ship 'em to Florida, Texas, California, all over. People know about me because my bikes show up at races and dominate. I go to races in St. Louis, for example, and those guys hate me because they can't touch me. I make them look ridiculous.”

Irwin doesn't see the point of modestly soft-pedalling his vocabulary or his talents. A semitruck driver in his day job who recently survived a nasty collision with a train, he says life is too short to be shy about his bespoke engine tailoring abilities. He works alongside two younger friends – Jeremy Flynn, 25, and Dillon Astramsky, 18, – who are learning from the master. Both men vouch for his wicked ways with a wrench, and the euphoria that flows from it.

“Oh man, it's a rush,” said Flynn, who just got back from a quick demonstration of one of the racing velociraptor bikes. He explains the feeling of speed on a bicycle is intense and there is also that sensation of a childhood dreams realized, of finally being zipped along by a bike you don't have to pedal.

“It's a bicycle with an engine, man,” he adds. “Who wouldn't jump on a bicycle and not have to pedal it to get where they need to go?”

Irwin says he got into motorized bikes more than eight years ago after noticing them and writing them off as “dumb” but finally succumbing and buying himself one. He soon slipped into a motorized bike addiction and began messing with the stock imported engines, sold at various sites online, so he could coax ever more speed out of them.

“Ever since I was a little kid aged about 10, I've liked working with engines to make them faster,” recalls Irvin. “And it's a thrill that never gets old.”

By his early teens he was already an expert at making everyday and normally slow mechanically propelled objects get up and boogie, and at age 13 had managed to hot-rod a riding lawnmower that could hit 35 mph. Mowing his way over to an accelerating love of souped-up bicycles just seems a kind of natural shortcut.

“I've always been the one who makes everything go faster,” he says. “I build speed.”

Got a need for some speed? You can talk about your motorized bike dreams by dropping Jim Irvin an email at jimirvin7014@gmail.com. On the sales side, he can supply a mild, road-ready new motorized bicycle for $350 to $375. Performance engines start about $600 and go up to $2,000 for the wildest in his stable. Irvin also offers a full range of motorized bike service and repairs.

Vroom with a view: Riding the straight and narrow on motorized bikes in Illinois

The trick to riding motorized bicycles is staying on the straight and narrow.

Jim Irvin, right, spends his free time creating motorized bicycles. Some his creations are gaining a reputation for speed on the race tracks. He is assisted in the building process by friends Dillon Astransky, left, and Jeremy Flynn, middle.