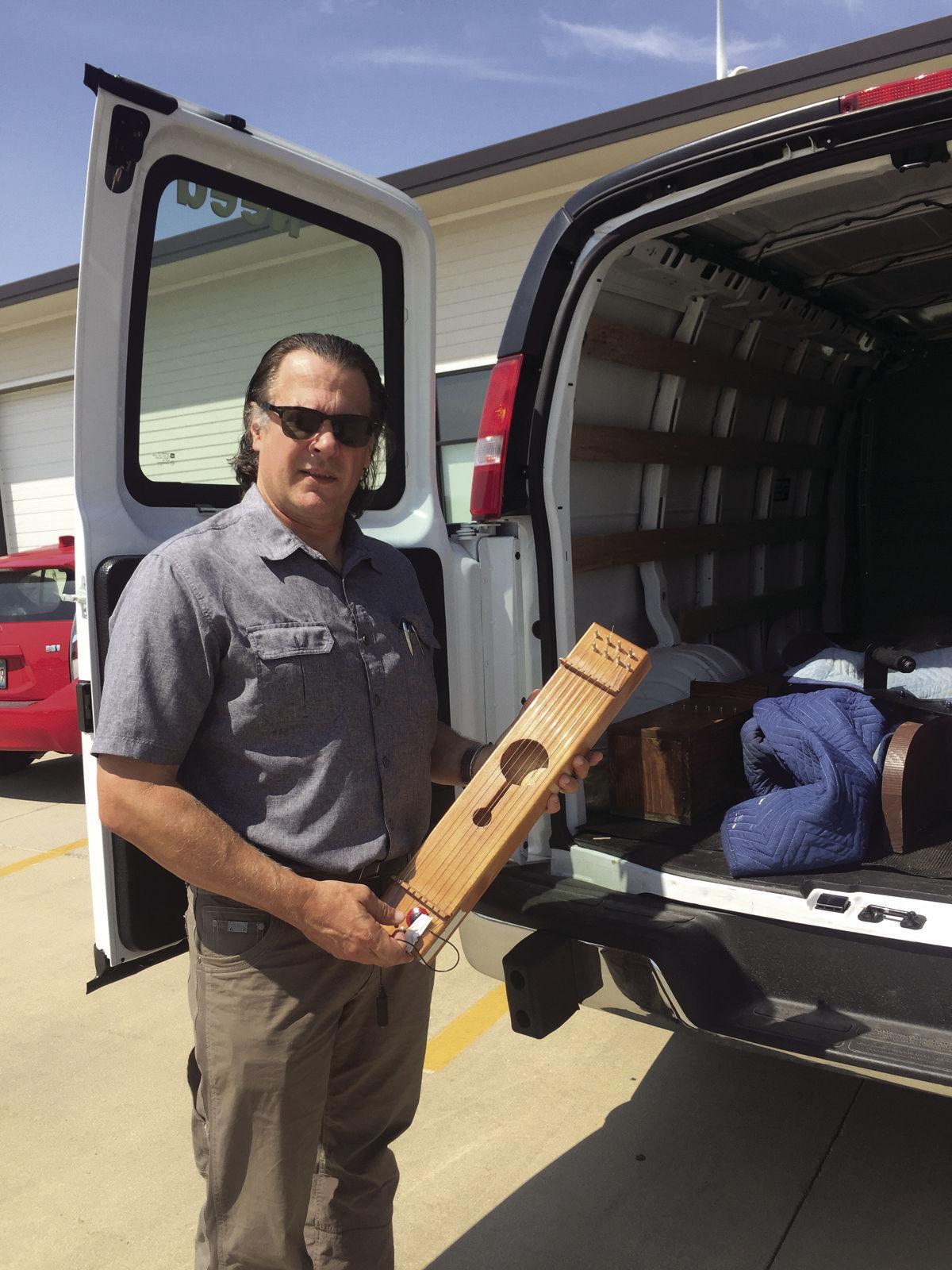 Craig Dongoski shows his Aeolian harp, which plays when the wind blows through it. 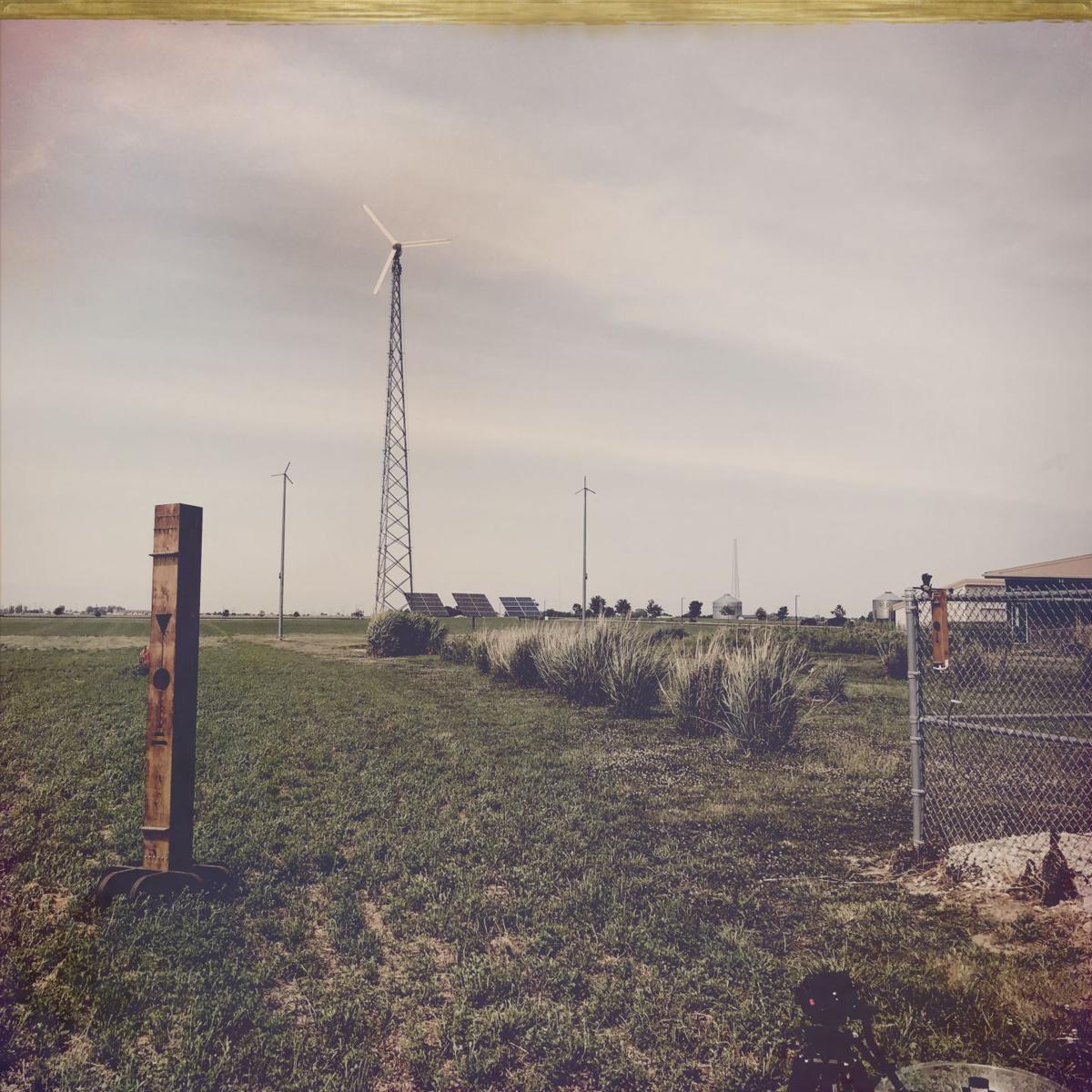 Craig Dongoski placed an Aeolian wood harp near the wind turbines to capture their sound at the National Sequestration Center at Richland Community College.

DECATUR — The wooden wind harps that Craig Dongoski made are not to be confused with wind chimes. They do not make music, they make noise — without human intervention.

The Aeolian harps, named after the Greek god of wind, are about communicating and connecting with the earth, Dongoski said. The harp plays when the wind blows through it.

“I don’t like to manipulate it too much,” he said. “The wind has it’s own rhythm it has a voice.”

This project began out of his general interest in radio and communicating across the wind, he said. Dongoski, now a professor at Georgia State University, grew up in Decatur. His father is a woodworker and helps him make the harps, which are based on a design from Henry David Thoreau.

“They are not what most people would think of as beautiful, but I am interested in it as a form of communication,” Dongoski said. “People are confused; it is not necessarily aesthetically good sounding. Those experiences tell me I’m making art.”

Recently, Dongoski decided to test his harps at the National Sequestration Center wind turbines at Richland Community College. His harps need a place with plenty of wind to work properly, so he thought the wind turbines would be a great location.

Dongoski worked with people in Decatur to explore this idea, including people from Millikin University. Brian Justison, a professor at Millikin, began collaborating with Dongoski with a program called “Spelling the Wind.” Art and percussion students involved in the program and then Dongoski participated in the commission of a work for the synergy festival in February.

“(Students) love Craig; he’s just a really interesting guy with a lot of ideas,” Justison said. “He is a really important voice. He’s got something to say.”

The two also bonded over exploring and pushing the boundaries of their art forms. Including, Justison participating in a improvisation with the wind turbines and Aeolian harps.

“It was an experience of inquiry, and the inquiry is exploring these sound as art and not just something that results from a mechanical device,” he said.

Justison is a musician, so he improvised with the sounds of the wind turbine and tried to frame the sounds as something coherent instead of just random sounds.

“We went out there and explored the potential of that we recorded a little bit it was mostly (Dongoski) recording me improvising and framing that whole wind turbine and its potential as a work of art,” he said.

Dongoski said he is interested in mind machines and experimental agriculture to pick up on the Earth’s subtle energies for answers. He said some farmers may use a machine to read the energies of their fields and crops. They would hook up the machine to a field, then ask the field a question, such as what is the radionic rate for calcium. Then, the field’s energy will respond and the farmer can add the correct amount of calcium to the field.

“When your whole livelihood is based on weather and uncontrollable forces, then people are looking into all kinds of things,” Dongoski said.

There’s a farmer who has a vineyard in Italy and plays classical music, he’s shown there are results, that the crops are more robust and grown stronger. But, Dongoski points out he used man-made music. Instead, Dongoski is interested in trying a more natural, indigenous type of sound, such as the wind. He is interested in seeing what the effect on crops would be for a wind harp to be placed in a field.

“It may seem wackadoodle, but no more wackadoodle than the farmer’s almanac, or reading weather veins,” he said. “Some get into it, not all do.”

Sometimes there is nothing to get, it’s just interesting and that’s enough, he said.

He has also used a similar machine with his students to telepathically re-create a picture. He hid a picture then had his students re-create the hidden picture by asking the machine questions. Then, depending on the reported energy, the students would attempt to draw the photo.

“You have a pencil and you ask the device where do I put the pencil, ask which way do you draw the line, how much pressure do I draw,” he said. “You’re not going in with a preconceived notion.”

People take the area around Decatur for granted when it comes to potential for art, Dongoski said. There are many opportunities to interact with the Earth and understand its energies. He hopes to continue working in the area and experimenting with his harps and wind turbines.

“To say I totally know what this is, I’d be lying, that’s not what that’s about,” he said. It’s about “not repeating something that is already there, that people already know.”

This story has been corrected to reflect that the harp is based on a Henry David Thoreau design.

HARRISTOWN — Only a select few 13-year-olds can say they've performed in the legendary Carnegie Hall. Vanessa Templeton of Harristown is among them.

A cross-country total solar eclipse will eerily dim the skies as the sun vanishes behind the moon on Aug. 21 – a rare cosmic marvel that won’t be seen here for another 28 years.

Millikin University is swarming with young musicians this week, roaming the halls clutching guitars or drumsticks, rehearsing and learning songs. They are part of the First Gig, a "rock 'n' roll boot camp" run by experienced musicians.

Craig Dongoski shows his Aeolian harp, which plays when the wind blows through it.

Craig Dongoski placed an Aeolian wood harp near the wind turbines to capture their sound at the National Sequestration Center at Richland Community College.