DECATUR — The Decatur police union is objecting to city rules they say require them to seize vehicles unconstitutionally — and they’ve asked a judge to intervene.

At issue is an ordinance that authorizes officers to impound vehicles used in the commission of certain crimes, including driving under the influence, having drugs or drug paraphernalia, soliciting a prostitute and driving with music too loud on multiple occasions. The violations collectively are known as “unlawful use of motor vehicle,” and police department rules direct officers to have the vehicles towed when it occurs.

To get the car back, the vehicle’s owner must pay $250 to the Decatur Police Department, plus fees to Prairieland Towing. That happens regardless of whether the owner was the person found to be using it unlawfully or even present at the time. If a city hearing officer later rules that the vehicle was not used in commission of a crime, the money is refunded. The underlying crime is prosecuted separately.

In court documents, the Decatur Police Benevolent and Protective Association Labor Committee argues that the city rules violate the U.S. Constitution in part because vehicles are seized as a punishment before the person is found guilty. The city says the ordinance is lawful and that similar practices are carried out in other communities.

The sides are set to meet for a hearing next month in the case, which dates to 2016.

“The city has overreached with its towing ordinance, and with its direction to the police officers to strictly enforce it,” union attorney Shane Voyles wrote in a motion filed March 29 in Macon County Circuit Court. 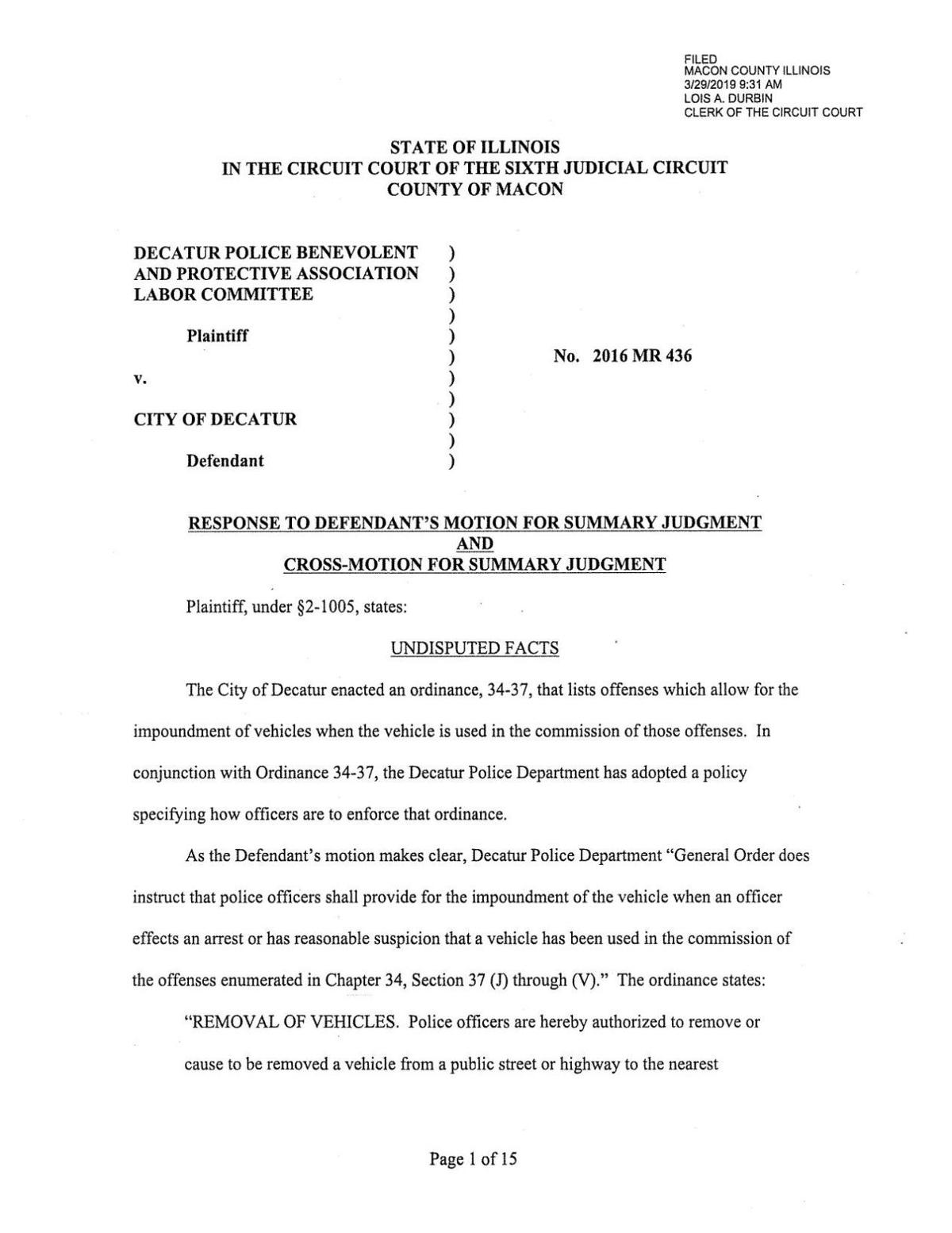 He acknowledged that Decatur’s status as a home-rule community allows it to legislate in some areas. “But home rule status does not authorize the City of Decatur to pass ordinances that violate the Constitution or Illinois statutes,” the motion continued. “The ordinance and police department (order) violate superior, pre-existing law and therefore are invalid and unenforceable.”

Voyles declined to comment to the Herald & Review, citing the ongoing case.

In court documents, the city argued that the measure is appropriate: “The ordinance authorizing the removal of vehicles by the City of Decatur is part of its powers to regulate for the protection of the public health, safety, morals and welfare.” 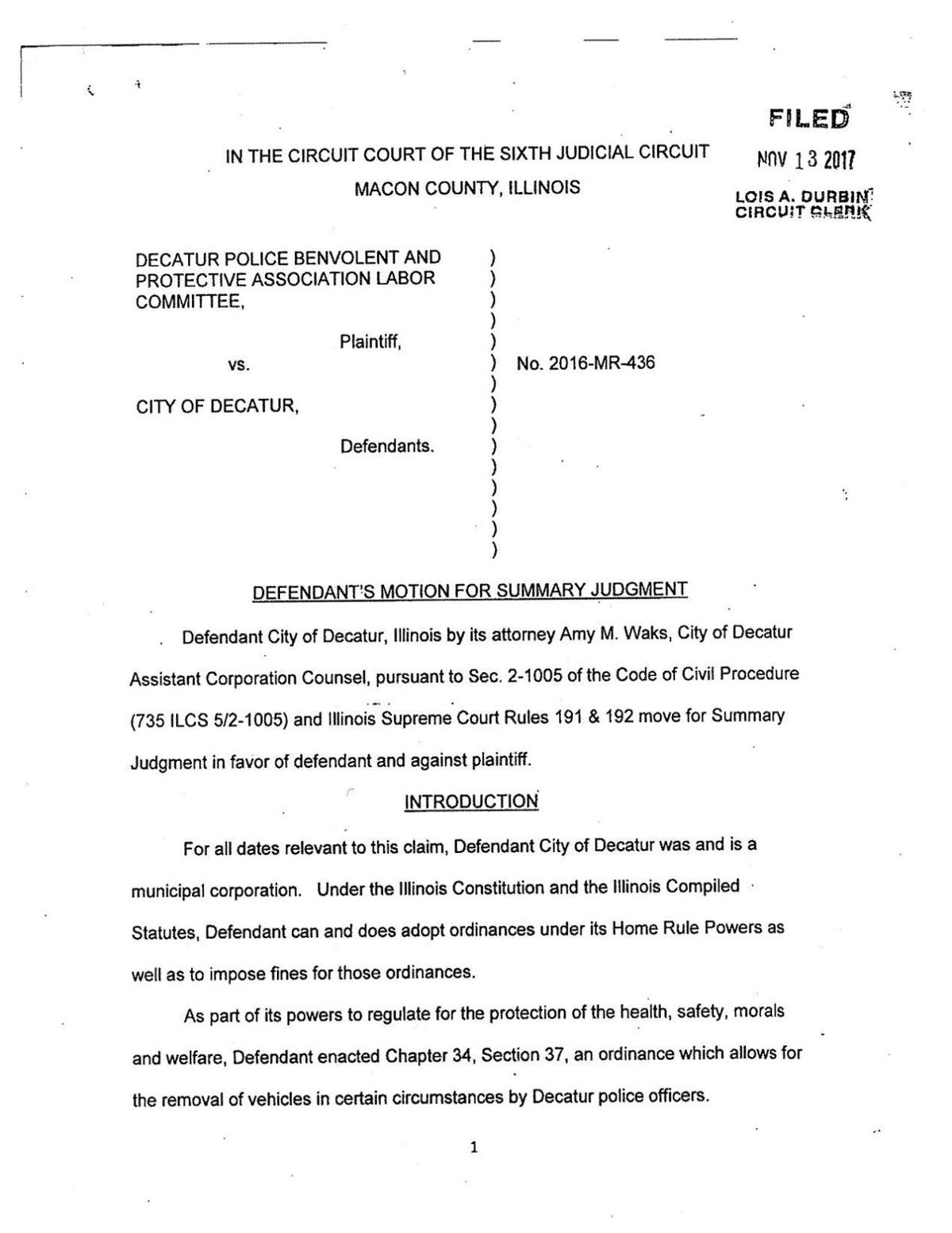 Both agreed the purpose of the ordinance is to deter crime. “This fine and the towing of the car, the idea was to be a deterrent for some of these crimes,” Getz said.

In 2015, the Decatur City Council heard from residents objecting to a city ordinance about loud music in cars. Specifically, vehicles were impounded if the driver was cited for playing music loud enough to be heard from 75 feet away. Even if they weren’t in the car at the time, owners had to pay $250, plus other fees, to get their cars back.

Residents at the time said this was too punitive. Some spoke of people who lost their jobs because they could not afford to reclaim their cars, as towing fees build each day.

City council members ultimately changed the rule so that vehicles were not towed until the second offense. First-time offenders get a written warning before their vehicles are seized.

But that’s not the case for other offenses spelled out in city code. It says police will impound vehicles that they find are used in the commission of the following offenses: 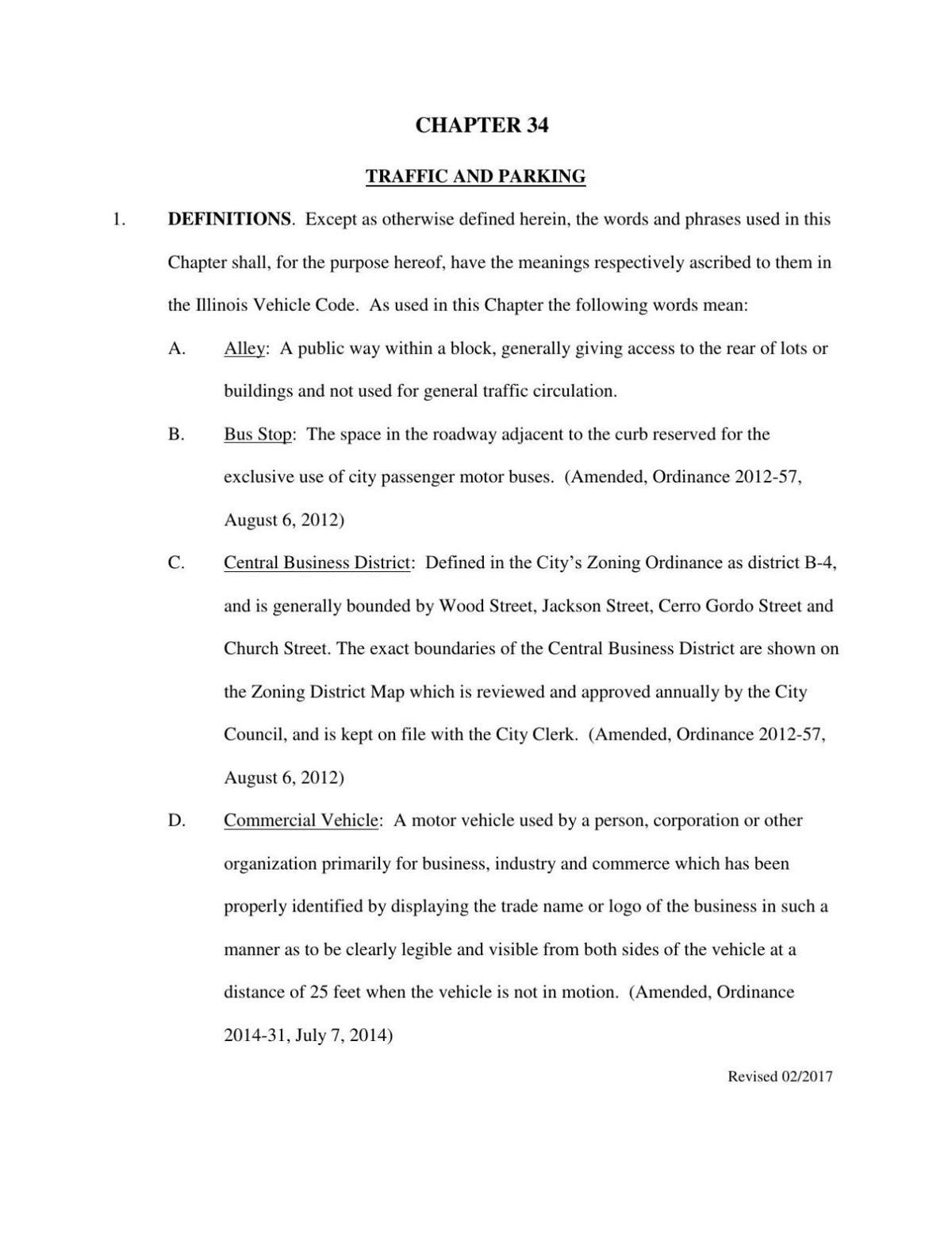 He said the most common offenses are driving under the influence or possession of drugs.

In court documents, the police union says there are multiple problems with the ordinance itself and with the police department’s internal policy about how to enforce. Those directions are spelled out in an eight-page document, General Order (16-19).

The union cites state law that limits authorized impoundments to four situations including stolen vehicles, unregistered vehicles, inability to remove the vehicle and arrest for an offense “for which the officer is required by law to take the person arrested before a proper magistrate without unnecessary delay.”

Instead, the union argues, the city ordinance does not allow consideration for whether the driver is being taken into custody and whether the vehicle could safely be removed from the road another way.

The union also argues that officers should be able to use their judgment to decide whether to seize a vehicle. “Instead of allowing officers the discretion to have a vehicle removed to a place of safety, the regulation eliminated officer discretion on whether to seize vehicle,” according to court documents from March 2019.

The city ordinance itself says police are “authorized” to impound vehicles used in the commission of the listed offenses, but the police department’s internal policy says they “shall” do so. It does provide an exception: A command officer can direct that the vehicle not be impounded “when it is in the best interest of the city/department.”

It’s unclear how often officers seek this exemption and how often it is granted. Police fill out a form every time they impound a vehicle. Asking permission not to impound a vehicle happens in a verbal conversation with the commanding officer, Getz said.

He gave an example of an instance in which an exception might be granted: If a person gave a friend a ride and the passenger was later found to have marijuana that the driver didn’t know about, the officer likely would not have the vehicle towed. “So there is some room for discretion for the officers to make in there that they’ll run by the command officer that’s working,” Getz said.

Waks gave another example in which discretion might be used: A person is pulled over for speeding and doesn’t have his insurance card, but tells the officer he has insurance. The officer may issue a written citation for lack of insurance, she said, but it’s up to police whether the vehicle is towed.

“Legally they would be able to tow the vehicle, because legally, (the driver is) required to have the insurance card in the vehicle,” she said. “But it’s discretionary for the officer.”

Getting the car back

When a vehicle is impounded under the ordinance, it is removed by Prairieland Towing, the Decatur company that contracts with the city. Police place what is called a “UUMV hold” on the vehicle. To retrieve it, the owner must post a $250 bond at the Decatur Police Department, 707 W. South Side Drive, along with paying fees to Prairieland, 2902 N. Woodford St.

Prairieland Towing owner Chad Richards said the owner will pay a fee of $75 to the business and an additional $25 for each day the vehicle sits in their lot. He estimated that 80% of vehicles that are impounded get retrieved by their owner.

City code allows vehicle owners to request a probable cause hearing with a police commanding officer — a sergeant or person of higher rank. The request must be made in writing within 24 hours of the car being impounded, and the hearing must be held at the police department or over the phone within three business days of the request.

If the commanding officer finds that the vehicle is not reported stolen and there is probable cause to believe it was used in commission of a crime, the case proceeds to its next step: an administrative court hearing.

Administrative court is the city’s vehicle for prosecuting various city code violations, which also include housing cases. The court was expanded in 2012 as a way to help clean up neighborhoods and change unwanted behavior, city leaders have said. Hearings are held at the Decatur Civic Center and decided by a hearing officer, who does not have to be a current circuit court judge.

If an owner does not pick up their vehicle from Prairieland Towing, the company pursues the process to send it to a junkyard, Richards said.

Richards said it costs the company $10 to apply for a junk title.

Visit herald-review.com to see court documents related to this case.

Next Decatur 'Coffee with a Cop' event scheduled for Nov. 5

DECATUR — Residents can meet up to discuss issues and drink coffee with Decatur police officers from 8 to 10 a.m. Nov. 5, at McDonald’s, 1835 …

The Richland Community College board approved a $15 million bond for campus improvements. So what's planned?

DECATUR — Jill Feinstein fell in love with science because of a grade school teacher who was passionate about the subject. After 16 years of i…

HARRISTOWN — Recreational cannabis sales will be allowed in Harristown when the drug becomes legal next year, village leaders have decided.

Why are these buildings empty? New Decatur effort focuses on filling vacant sites

Anyone driving the city’s main corridors might see an empty retail spot or former restaurant and wonder: Why is that still empty? Reporters Kennedy Nolen and Analisa Trofimuk look at the causes — and a new city effort to help.

Decatur police union and city officials said in court Wednesday they are working to settle a three-year dispute over an ordinance requiring officers to seize vehicles, a move the union says is unconstitutional. 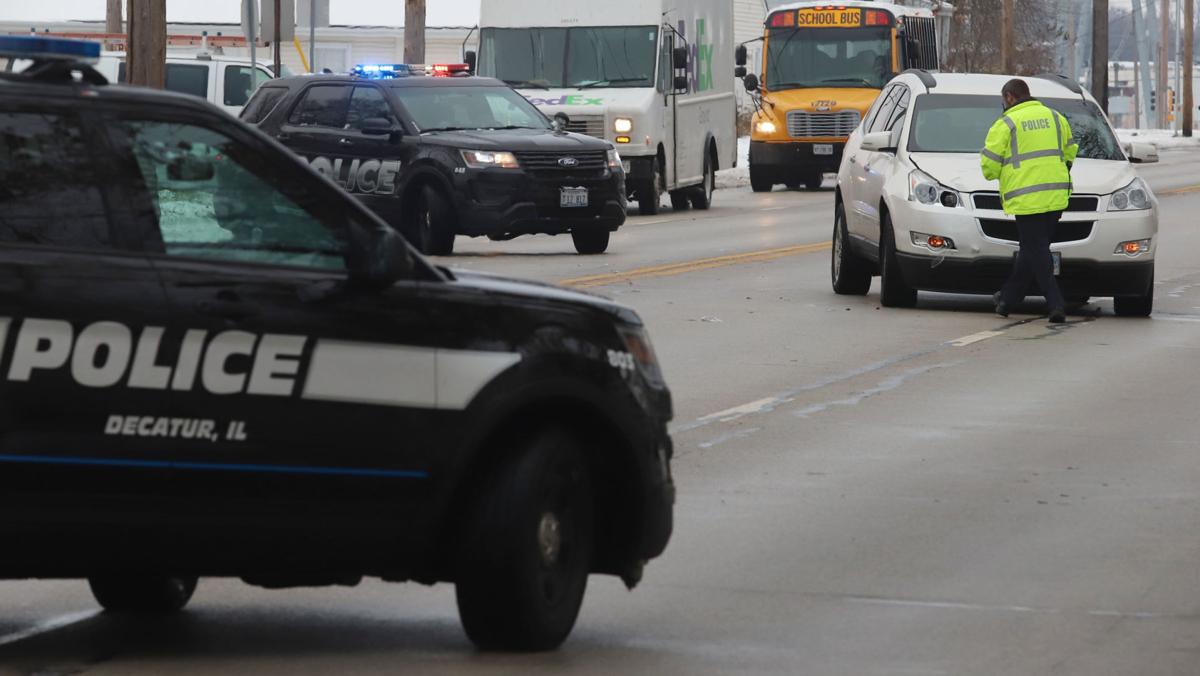 Decatur police respond to an accident at Martin Luther King Junior Drive and Decatur Street in November. The police union is at odds over a municipal ordinance regarding towed vehicles.