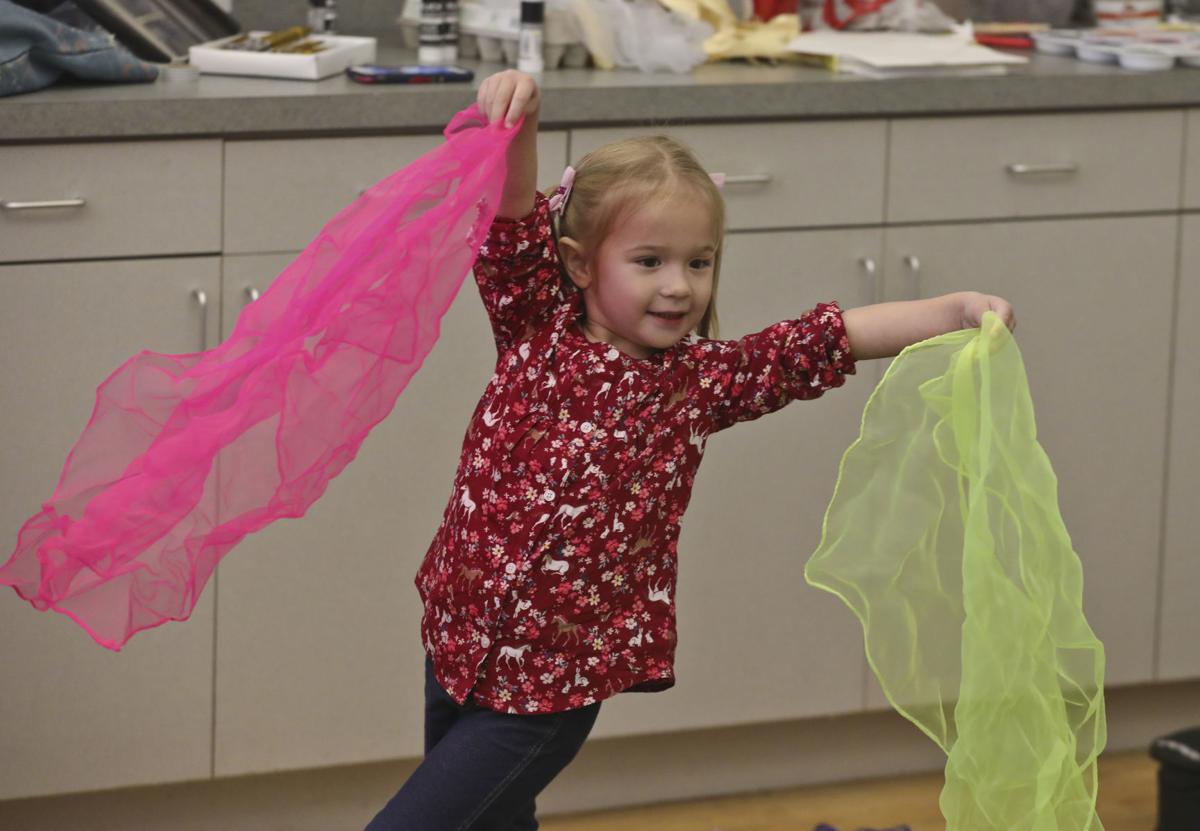 Elsie Taylor, 3, dances on Saturday during Pre-K Free to Be Me at the Decatur Arts Council. The class offers preschoolers a chance to dance, sing, act and create as the instructor Kristen Stoddard leads them to be themselves in various forms of art. More photos at www.herald-review.com 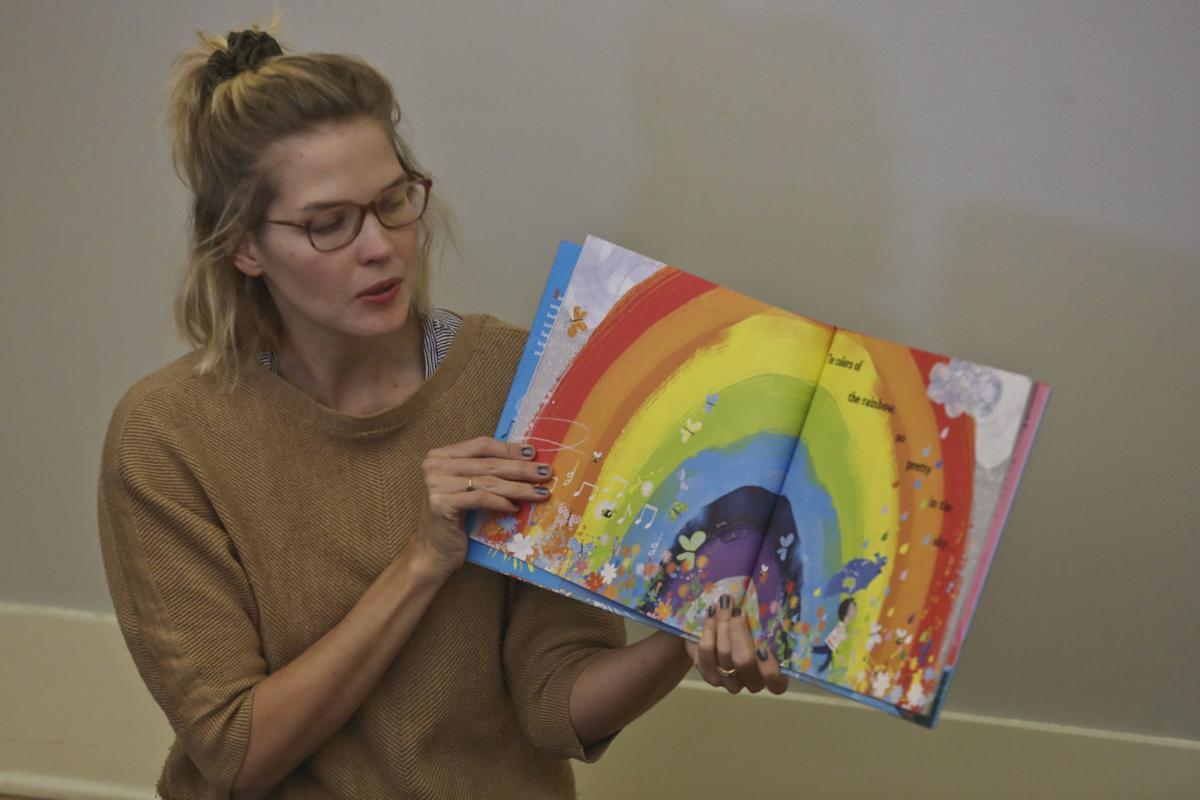 Instructor Kristen Stoddard reads "What A Wonderful World" to the group. 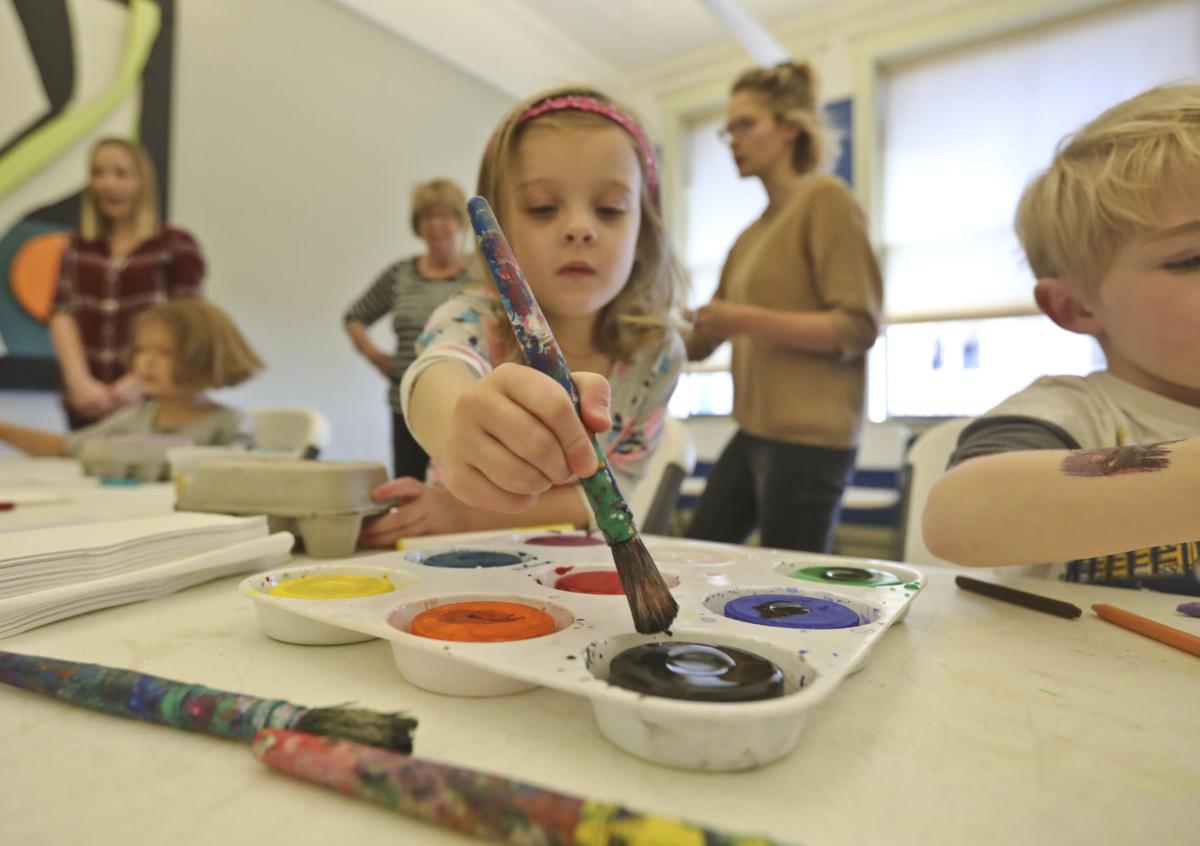 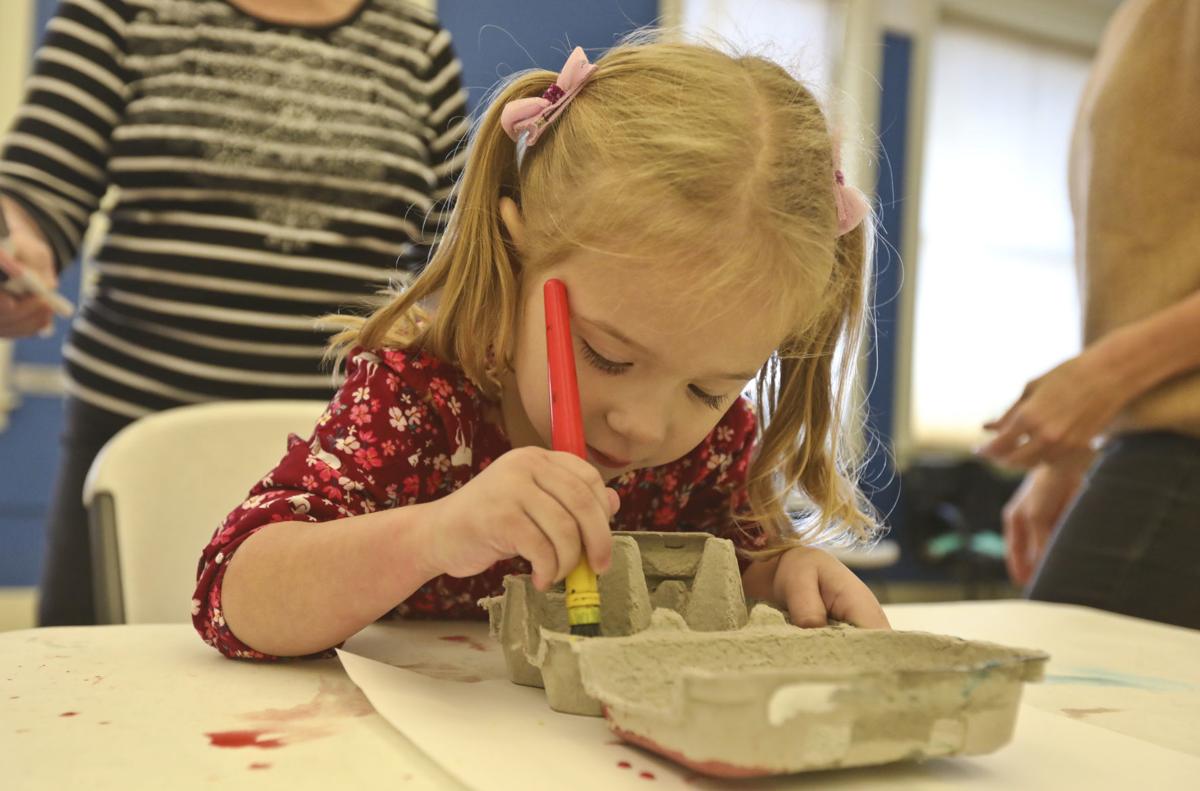 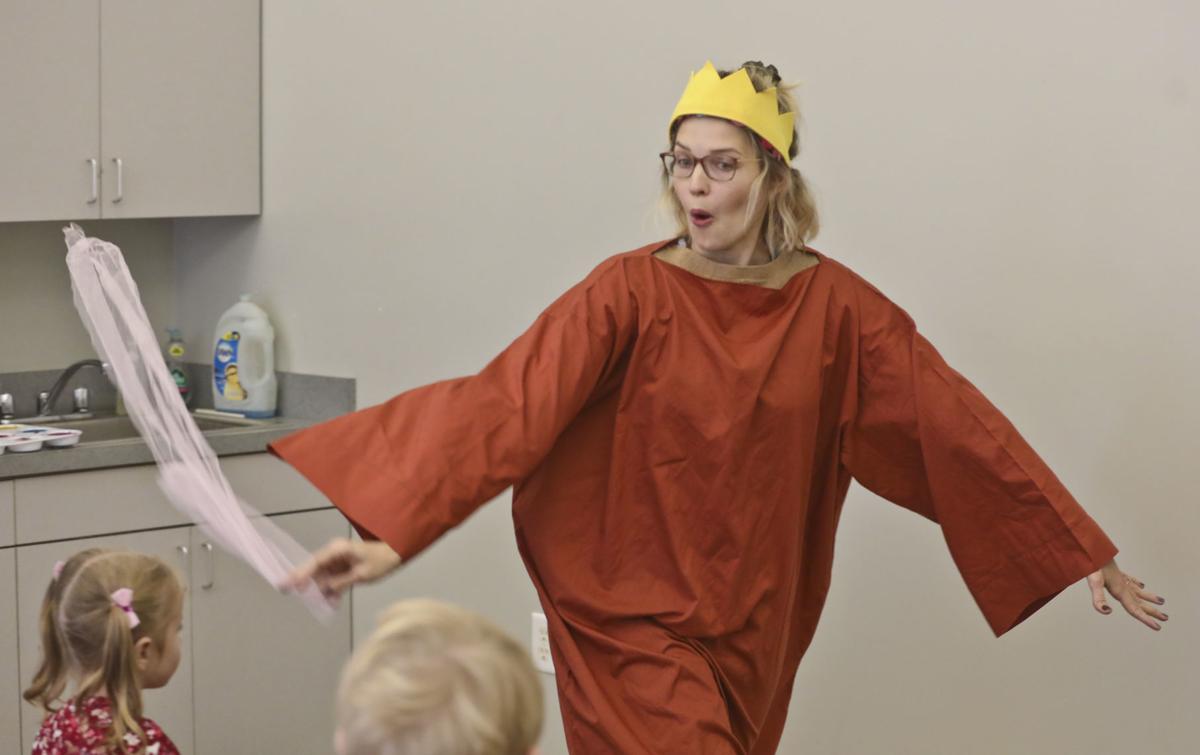 Instructor Kristen Stoddard plays the part of "Queen of Autumn."

DECATUR— Laughter and singing of pre-school children echoed through the second-room of the Decatur Area Arts Council Saturday morning as they explored and practiced various art forms.

Singer-songwriter Kristen Stoddard, of Decatur, created the interactive art series for children, because she felt it was missing from the community.

"I kind of incorporate all kinds of arts-- movement, music, visual art," she said. "This is basically just creating what I wanted for my own kids."

Stoddard strummed her guitar and opened the class with an acoustic version of Louis Armstrong's "What a Wonderful World."

"Today we are going to be talking about what a wonderful world we have," Stoddard said to the bright-eyed, curious toddlers.

The theme of the session focused around nature, as Stoddard had the children guess if items in her "magical bag" were man-made or natural. Items included a pumpkin, marker, plastic bag, feather, tape and a bird's nest.

"I just try and cram it all in there," she said about fitting as many forms of art into the class period.

Stoddard said she tries to incorporate the arts into her children's lives as often as possible, saying she views the arts' importance "like healthy food."

Kristy Janet, of Brookfield, Wisconsin, is originally from Cerro Gordo, and was in Decatur visiting her sister. Her 6-year-old son Michael joined his cousin Elsie Taylor, 3, and the rest of the group for the morning.

"For me, the big thing is he's not in front of an iPad or in front of the TV," she said. "They're singing, being creative, learning, engaging. It's something fun and different."

The group painted treasure boxes to take home, which was a well-loved activity, especially by 4-year-old Joni Stoddard, who meekly said, "I'm very good at painting."

Four-year-old Audrey Wilton, of Forsyth, said painting was what she looked forward to most before the class began.

Kasie Wilton said she's proud her daughter is more interested in books and art instead of toys.

"She just loves art," she said. "She loves to be creative."

The mother-daughter pair went to a few sessions last year and enjoyed a class where Stoddard taught the group of children how to express their feelings.

Wilton said, "(The class) is a neat way to interact with other kids too."

Stoddard had the children use their imaginations to pretend they were bunnies. Elsie Taylor hopped around the room, and Michael Janet pretended to eat carrots. She read books and poems based on the theme of nature and asked the group to point out aspects that stood out most.

After putting on a baggy brown dress and golden crown, Stoddard turned herself into the "Queen of Autumn" and had the group decorate the world with colorful tulle.

She ended the class with songs encouraging the children to participate by singing, running, jumping, clapping and tip-toeing.

Michael said he was nervous before the class, but after he said, "I'm not scared anymore."

Not only is the class a learning experience for the children, but also for the parents.

"Not every parent feels like they know how to approach the arts with their kids," Stoddard said. "So this is kind of to help empower parents with ideas."

The winter series has not been scheduled, but Stoddard is working to find the best location.

"The Arts Council has been really great making it happen," Stoddard said. "But my dream with it, is that it is more accessible for people."

It's been years since there was a parent-teacher organization at Stephen Decatur Middle School. Now that's changed.

From an essay contest to landscapes based on “God Bless America,” Lutheran School Association students are celebrating Veterans Day creatively.

🎅 It's here again. Santa's house is back at Central Park.

Frigid temperatures did not stop Santa's helpers from assembling his house in Central Park in Decatur Monday morning, declaring the start of the Christmas season.

Want to visit the Fox in St. Louis, but don't want to drive? The Decatur Area Arts Council has just the ticket.

Elsie Taylor, 3, dances on Saturday during Pre-K Free to Be Me at the Decatur Arts Council. The class offers preschoolers a chance to dance, sing, act and create as the instructor Kristen Stoddard leads them to be themselves in various forms of art. More photos at www.herald-review.com

Instructor Kristen Stoddard reads "What A Wonderful World" to the group.

Instructor Kristen Stoddard plays the part of "Queen of Autumn."