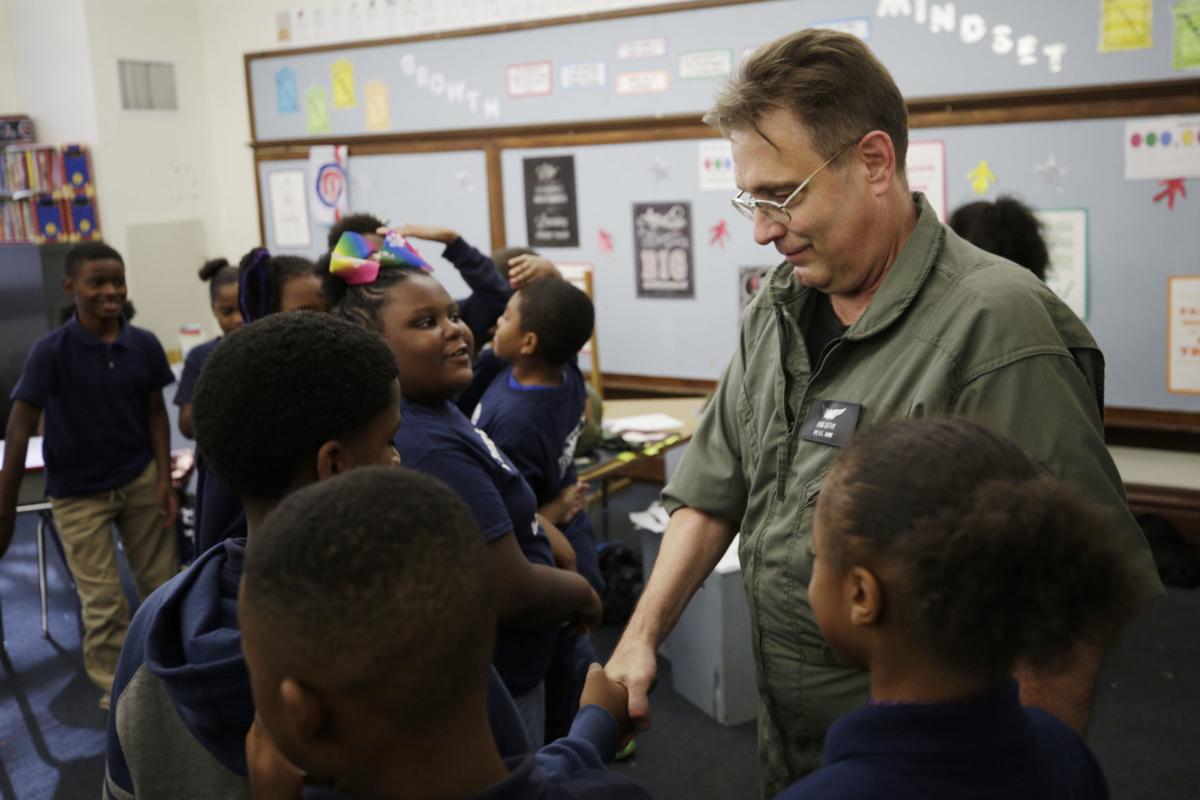 Douglas Luthy speaks in Wayne Dunning's fourth grade class on Friday. He was in the United States Army. 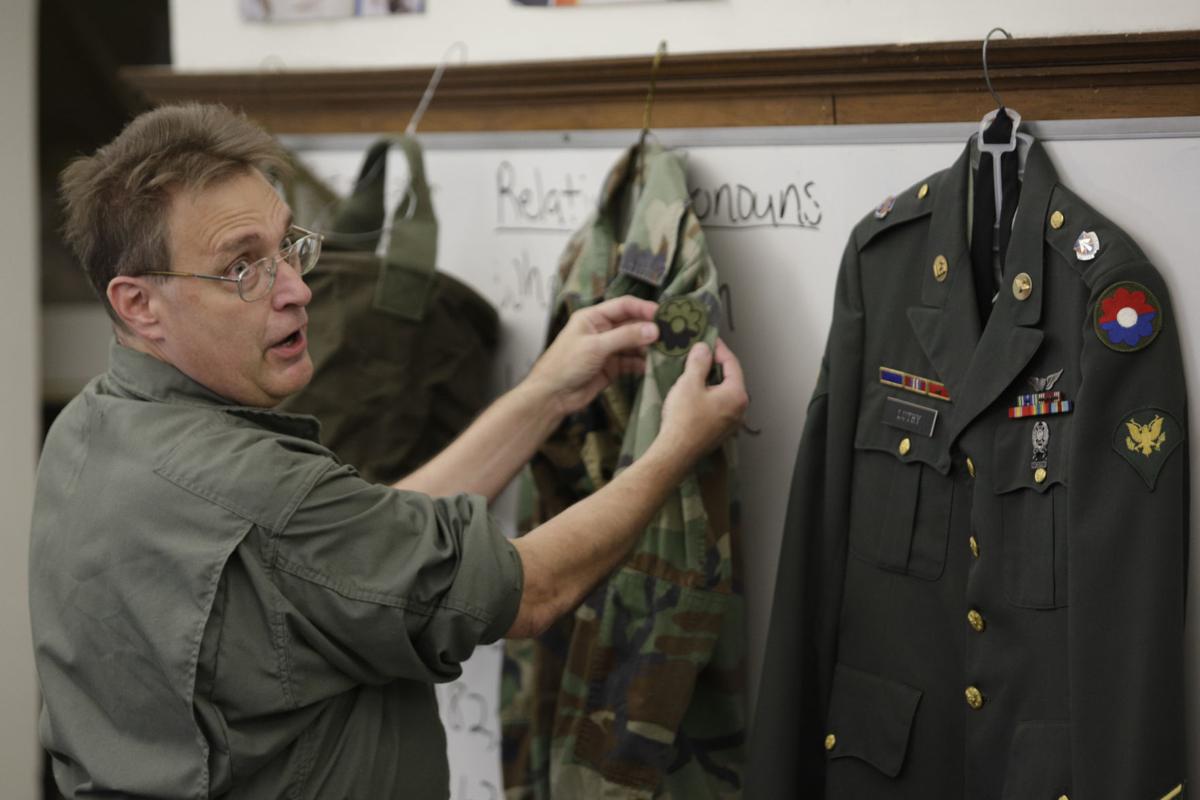 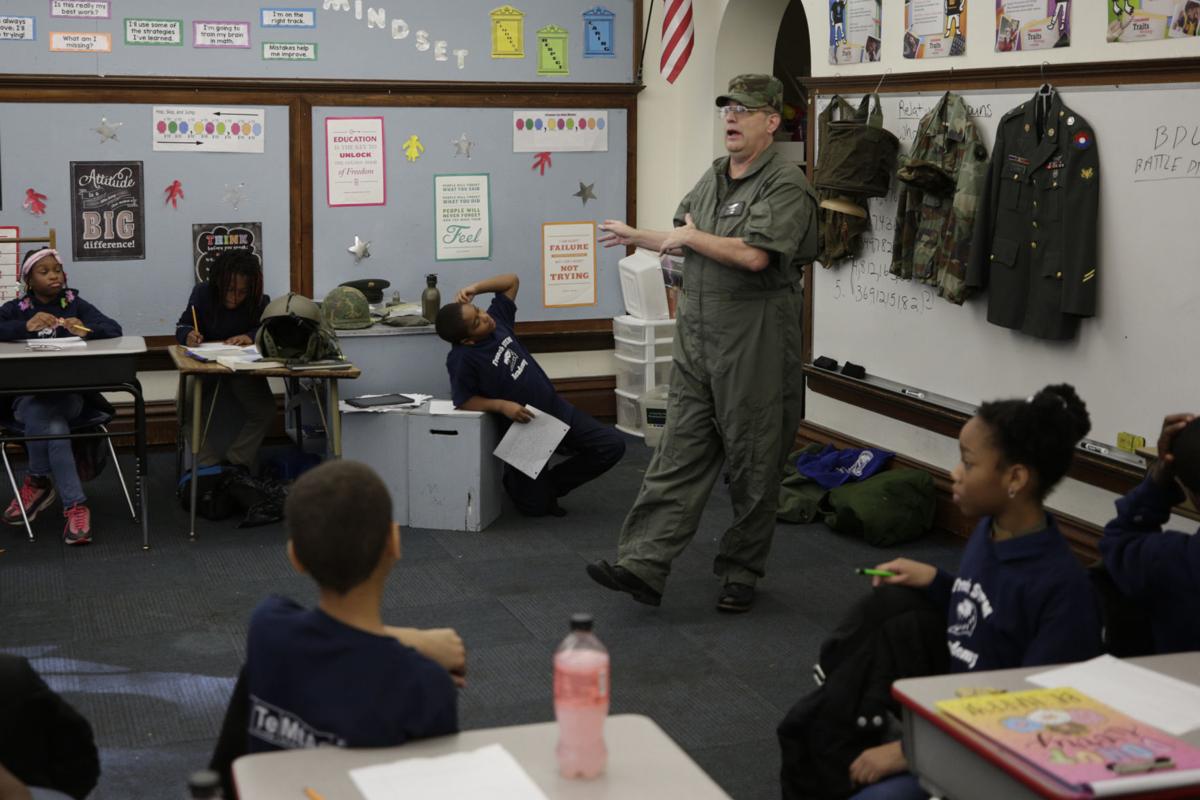 Douglas Luthy talks about his experience in the U.S. Army and shows his memorabilia from his service.

DECATUR – Fourth grade isn't a time to learn details about the dangers of serving one's country through military service, but students at French Academy met a disabled veteran on Friday who knows firsthand.

Douglas Luthy, father of French fourth-grader Makaela Luthy, visited the classroom with some of the uniforms and equipment he used during his time in the United States Army, which included service during Desert Storm, as part of preparing kids for observing Veterans Day on Monday, Nov. 11.

One of the uniforms had his 9th Infantry Division patch on the sleeve in red and white, but the same patch on the shoulder of his camouflage “BDU” (battle dress uniform) blended in with the green and black of the camouflage. One of the students asked why.

“You want subdued colors on this one,” Luthy said. “Bright colors make you stand out and make you a target.”

Luthy also showed the students his field helmet, the style of which is a metal liner and a metal outer shell that he said he used as a portable sink for shaving. You have to stay clean-shaven, even in the field, he said. That helmet style was phased out and replaced with Kevlar. The reason for that is because the metal helmets deflect bullets, but Kevlar can “take a hit.” When students asked what that meant Luthy, after exchanging a glance with teacher Wayne Dunning, explained that the Kevlar helmet can absorb impact better, without going into too much detail.

Students also asked a lot of questions about the flight suit Luthy was wearing. It's fire-resistant, he said, but that means it's hot, and he only wore it when he was flying.

In Wayne Dunning's Decatur basketball camp, character lessons are also on the agenda

“You don't wear it when you're working on the helicopter,” he said. “If you get oil on it, it won't be fire-resistant anymore.”

Luthy joined the Army on June 16, 1985, and was injured in Panama in 1991. He pushed up the legs of his flight suit to show the students how much bigger his injured leg is than the other one, due to the metal and plates used to repair the damage.

Dunning has been teaching the students about veterans and Veterans Day, said student Makylin Hudson.

After Luthy finished his presentation, Dunning urged the students to shake his hand and thank him for his service, and he was immediately surrounded by fourth-graders.

Makaela said her dad comes to school every Friday to have lunch with her.

“We talked to him about making a presentation,” she said. “We had to remind him every day. I'm used to him being (at school), but not to having him make a presentation.”

During Illinois teacher shortage, Decatur and other districts turn to long-term substitutes

DECATUR — Jorden Bell describes the Rev. Wayne Dunning as the best teacher he’s ever had.

‘Keep your head up’: Decatur leaders encourage teens to follow their dreams

DECATUR — Derronta Woodland has big plans for his future.

This weekend's forecast for Decatur: Cold, then warm, then snow? Here's what's in the forecast

Get ready for a roller-coaster of temperatures this weekend.

Some of the students at French Academy's Living Wax Museum took the idea of being “wax” very seriously indeed, sitting motionless until a visitor stopped at their station.

Douglas Luthy speaks in Wayne Dunning's fourth grade class on Friday. He was in the United States Army. 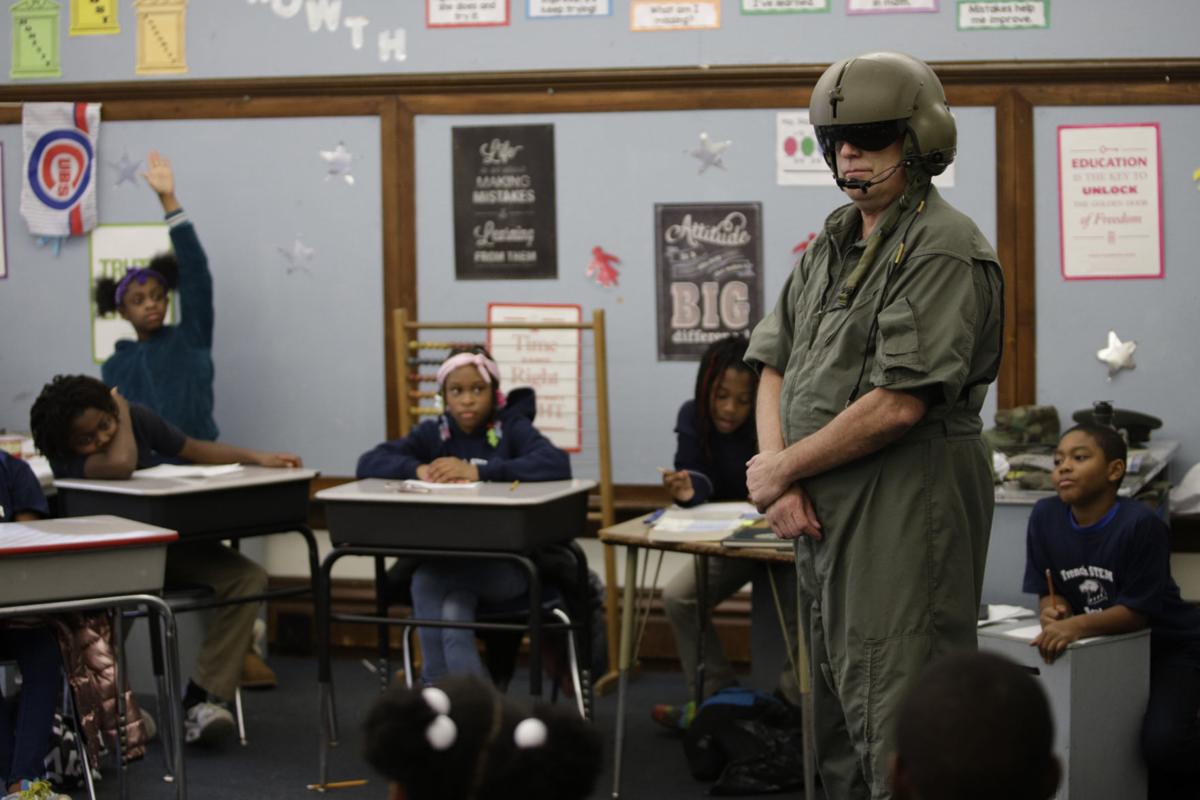 Douglas Luthy talks about his experience in the U.S. Army and shows his memorabilia from his service.